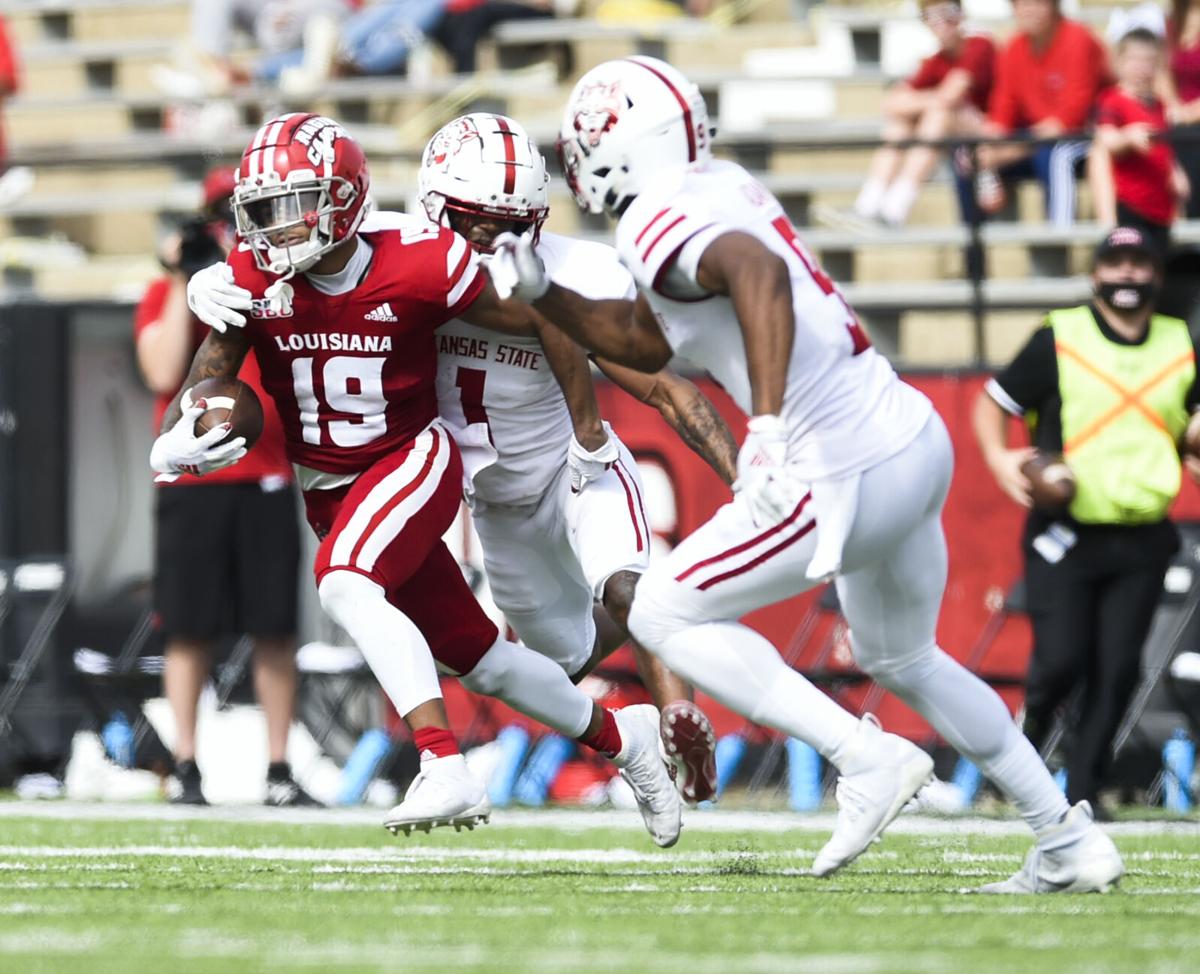 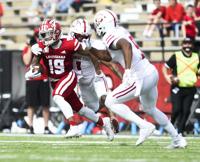 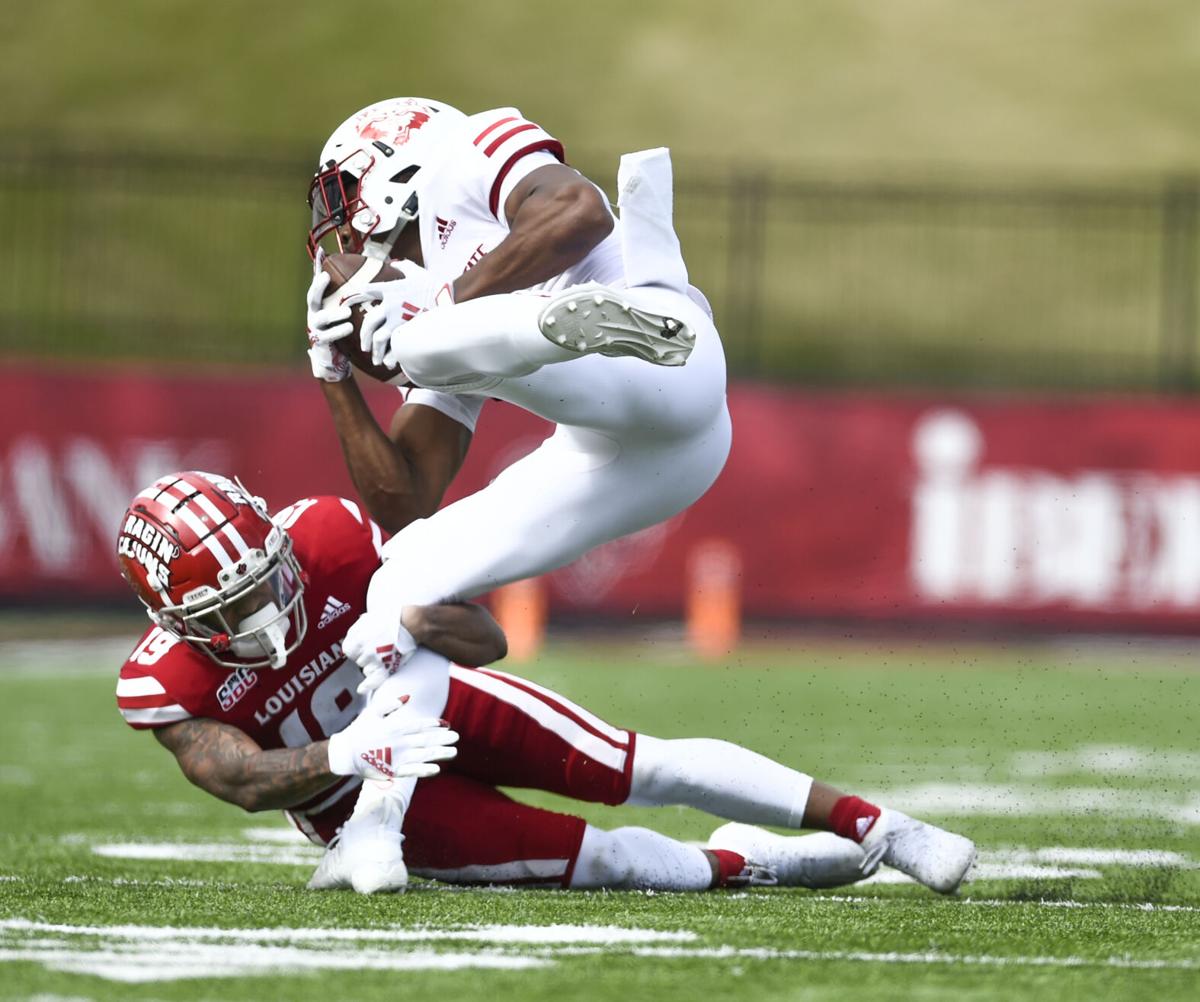 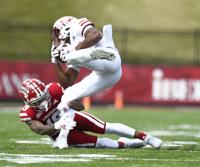 UL cornerback Eric Garror shows his ability to tackle as well against Arkansas State's JOnathan Adams this past Saturday.

UL cornerback Eric Garror shows his ability to tackle as well against Arkansas State's JOnathan Adams this past Saturday.

UL junior cornerback Eric Garror was asked how high he’d rank the defense’s performance in the 27-20 win over Arkansas State to the other games this season.

After briefly considering his options, Garror put it second behind the 24-20 win over UAB on Oct. 23.

The truth is, it wasn’t an easy question to answer. There were many legitimate answers, including the 31-14 win over Iowa State.

Now with the No. 25-ranked Ragin’ Cajuns needing a win in Saturday’s 1 p.m. showdown with South Alabama to qualify for a third consecutive Sun Belt Conference championship game, don’t be surprised if the defense is counted upon heavily once again.

That’s quite a statement for a unit that lost its coordinator during the offseason when Ron Roberts left for Baylor, replacing him with safeties coach Patrick Toney.

“Coach Toney’s done a real nice job this year. He’s done a really good job of leading the staff and also leading the players,” Napier said. “We’ve got real high expectations and really high standards with how we play defense around here, regardless of who we play or when we play.”

The secret to the unit’s success is a combination of personnel and preparation.

In one way, it’s a pretty simple process.

“He puts us in the perfect position to make plays,” senior linebacker Ferrod Gardner said of Toney. “It’s just up to us to go make them. We’re just doing what we’re taught to do.”

On the other hand, it takes a lot of study time to get to that point.

“It’s the stuff that ya’ll don’t see that goes into the game and that allows us to make plays.”

It also takes a certain level of feistiness … at least in Garror’s case. Listed at 5-9 and 176 pounds, Garror looks like a tempting target for 50-50 passes to tall receivers, but typically Garror wins the battle.

“Everybody’s going to try to come at me because I’m short,” Garror said. “I just go out there and try to play big every play.”

He has 20 tackles, three interceptions and two breakups on the season.

“Eric, man what a competitor,” Napier said. “The guy’s 5-9 and change. He’s a very detailed technician and has a good football IQ, great instincts. I think coach (LaMar) Morgan has done an exceptional job of developing Eric. He’s taken the next step over the last two years.

“We go against him every day in practice, and no surprise to me. Not only did he pick them off, but he also just made a lot of plays in 50-50 ball situations, where he’s getting the ball out.”

Garror says Toney and Morgan are constantly challenging the secondary.

“We do a good job in practice and in film study,” Garror said. “We’re watching for formations and the routes they do with the game plan for the week.

“Coach Toney and coach Morgan are always preaching about winning the junction points – the one-on-ones – any one-on-ones we have, we’ve got to win those. We take that to heart and we do great with that. We do drills in practice to get better at that and we just go into the game and execute.”

“He does a great job of teaching us the technique that he wants us to play that’s going to be good for us on Saturdays,” Garror said. “He really doesn’t care about football really. He really cares about us being men … about our life. That’s what it’s all about. It’s not really about football, because at the end of the day, football’s not going to be here for long.”

For the season, McCaskill has 61 tackles and two sacks.

“He’s definitely taken his game to the next level,” Gardner said. “I feel like Lorenzo is a great player and a great leader for this team. He comes in and puts his head down and works hard. He’s one of the hardest workers on this team.

“Great leader, great guy to go to. I’m glad I have him in my corner. I’m glad to be able to play next to him and he’s going to be great for this team in the future.”

While Napier would love for his offense to take some pressure off the defense, safety Percy Butler said the defense accepts the burden.

“That makes us stronger,” he said. “When it’s time for the games at the end of the season that really count, we know we can come back from situations like that. We already know how to handle that. Nobody’s going to get down. We know what we’re going to do in those situations. It’s really making us stronger.”

"The sky’s the limit for this defense," he said. "We have ball hawks on the back end, I love our linebacking group, our rotation is really great. and I love our D-line. Our D-line comes in there executing and they play hard. I love playing on this defense.

"We haven’t played our best ball yet. We haven’t gotten a shutout yet. We still haven’t met a lot of our goals that we set at the beginning of the season. We still have plenty of time to meet those guys. I believe that this is the defense that can do it."

Former UL standout Al Riles, killed over weekend in Dallas, 'could light up a room'