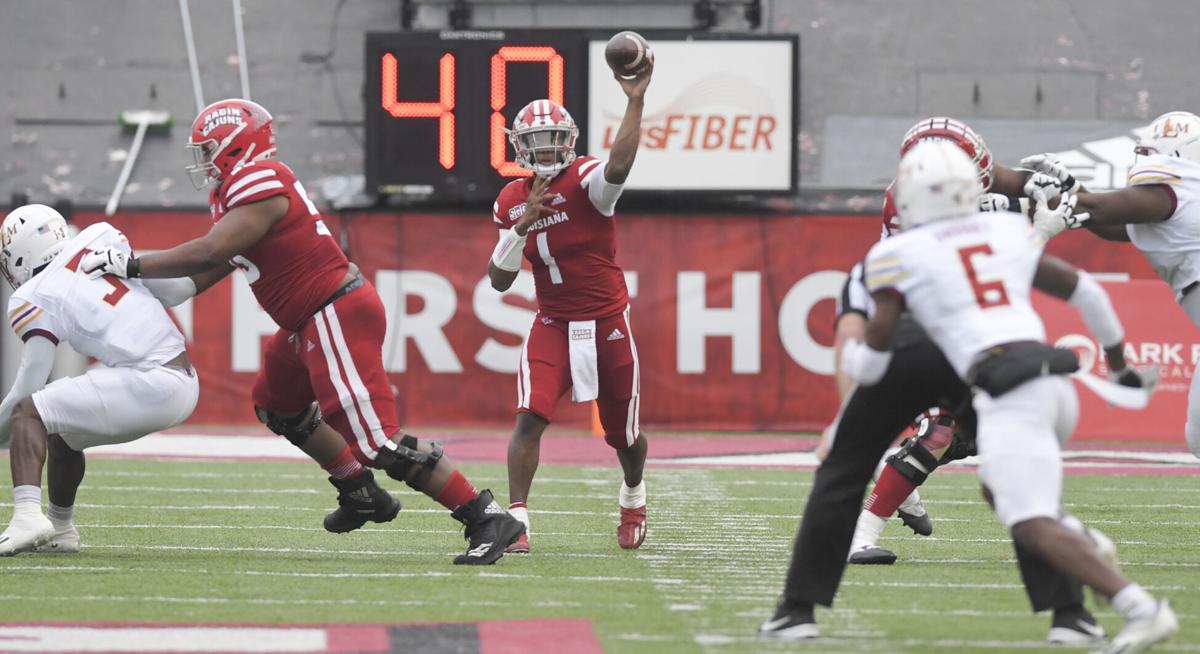 UL quarterback Levi Lewis (1) gets off a pass during the Cajuns' 21-16 win over ULM on Saturday at Cajun Field. 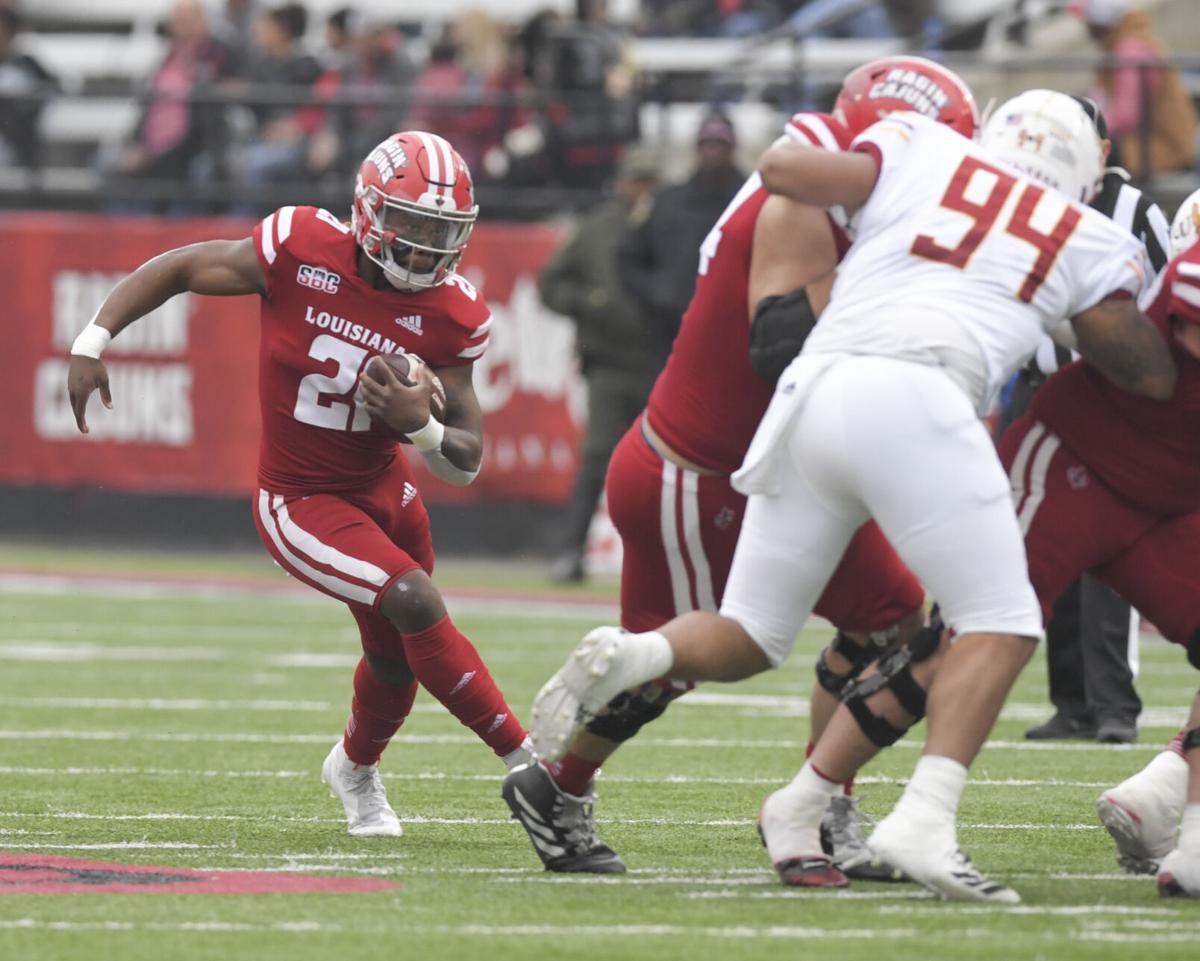 UL running back Chris Smith (21) looks for running room during the Cajuns' 21-16 home win over ULM on Saturday at Cajun Field. 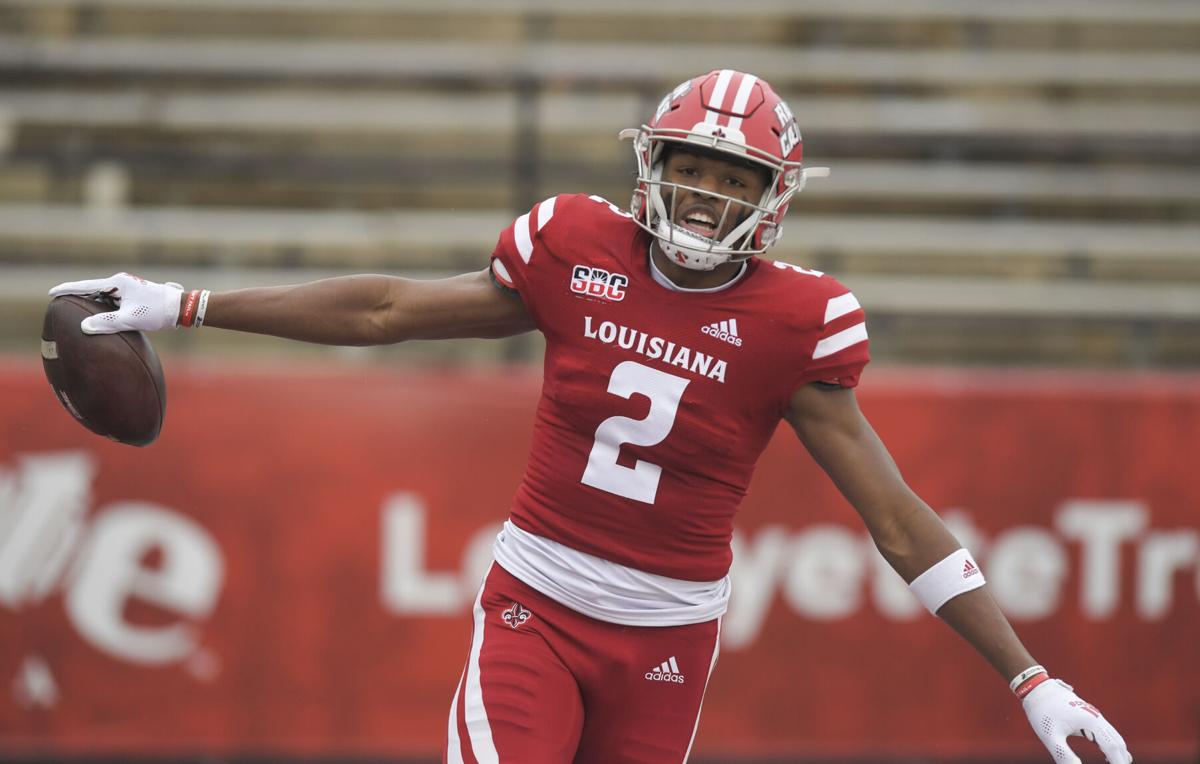 UL wide receiver Kyren Lacy (2) celebrates his touchdown during a 21-16 home win over ULM on Saturday at Cajun Field.

UL quarterback Levi Lewis (1) gets off a pass during the Cajuns' 21-16 win over ULM on Saturday at Cajun Field.

UL running back Chris Smith (21) looks for running room during the Cajuns' 21-16 home win over ULM on Saturday at Cajun Field.

UL wide receiver Kyren Lacy (2) celebrates his touchdown during a 21-16 home win over ULM on Saturday at Cajun Field.

On Senior Day at Cajun Field, it was more about the overall achievement of the No. 23-ranked UL Ragin’ Cajuns than the execution in Saturday’s regular-season finale.

In holding on for a 21-16 victory over the ULM Warhawks, the Cajuns completed their first perfect season in Sun Belt Conference play.

"I don't know that kind of subpar performance to take away from this group of seniors and everything they've accomplished," UL coach Billy Napier said. "This group has won 11 in a row. That's three years in a row we've won 10 or more games. First time in the history of this school we've gone undefeated (in Sun Belt play), and four years of going undefeated against Western Division opponents.

"And done enough this year to position ourselves to play for the conference championship game here next week with homefield advantage. Regardless of ULM's statistics or their record, we knew it was going to be a little bit tougher than the experts thought."

None of the game’s statistics were all that impressive.

Senior quarterback Levi Lewis was a modest 13-of-22 passing for 153 yards with no touchdowns or interceptions.

His top target was tight end Neal Johnson with three receptions for 80 yards. The leading rushers were Montrell Johnson with 62 yards on five carries, while Emani Bailey added 61 yards and a score on 13 carries.

The Warhawks had more first downs than the Cajuns – 20-17 – but UL outgained the Warhawks 382-325 in what was a competitive game the entire way.

"You've got to give a lot of credit to coach (Terry) Bowden, their players and their staff," Napier said. "They showed up a competed and played hard in the game."

"We were back to early in the year," Napier said of conversion issues. "That's about as ugly as it can get, but our defense stepped up. I thought we made critical stops."

The Cajuns couldn’t have started out the game much faster, but it fizzled by the second quarter.

UL’s first possession quickly covered 75 yards in two plays. First it was a 55-yard completion to tight end Johnson one play before a 20-yard touchdown run up the middle by Lewis for a quick 7-0 lead.

The Cajuns’ offense just kept rolling, however, with an eight-play, 75-yard touchdown drive in 3:45.

Completions of 7 and 17 yards to Errol Rogers cross midfield, before Chris Smith completed a 37-yard touchdown pass to Kyren Lacy on a halfback pass for a 14-3 lead with 3:48 left in the opening period.

That was it for the Cajuns, though, the rest of the first half. After turning it over on downs at the ULM 38 on the next possession, the Cajuns punted on three straight drives.

A fumble recovery by Andre Jones with 11 seconds left in the first half didn’t even materialize. After an incompletion in the end zone, Nate Snyder narrowly missed a 39-yard field goal on the final play of the first half for a 14-10 halftime lead.

The Warhawks began the second quarter with a five-play, 62-yard drive in 1:39 to make it a four-point deficit. Rhett Rodriguez connected on a 46-yard touchdown pass to Boogie Knight for the Warhawks’ touchdown.

The Cajuns settled for 211 total yards in the first half after converting on only one of six tries on third down.

After turning it over on downs at the ULM 31 to open the second half, the Cajuns finally ended a stretch of six straight possessions without points midway through the third quarter.

It was much like the first drive of the game, covering 85 yards in just four plays. A 42-yard run by Montrell Johnson was quickly followed by a 27-yard completion to Peter LeBlanc. One play and penalty later, Bailey’s 2-yard made it 21-10 with 5:01 left in the third.

UL’s third defensive stand of the second half got the Warhawks impatient, trying a fake punt pass that failed. That set up a great scoring opportunity for the Cajuns, but instead the ULM defense turned the Cajuns away on fourth-and-1 with 13:06 left in the contest to keep it at 21-10.

The Cajuns had yet another chance to put the game away late in the game, but turned it over on downs for the third time – this one at the UL 29 with 3:49 left to play.

With new life, the Warhawks promptly drove 71 yards on 11 plays in 2:14 get even closer at 21-16 with 1:35 left to play. Malik Jackson did the honors with a 12-yard touchdown run, but the two-point conversion pass failed.

If the 37-yard touchdown pass from halfback Chris Smith to wide receiver Kyren Lacy looked a little peculiar to you, you weren’t imagining anything.