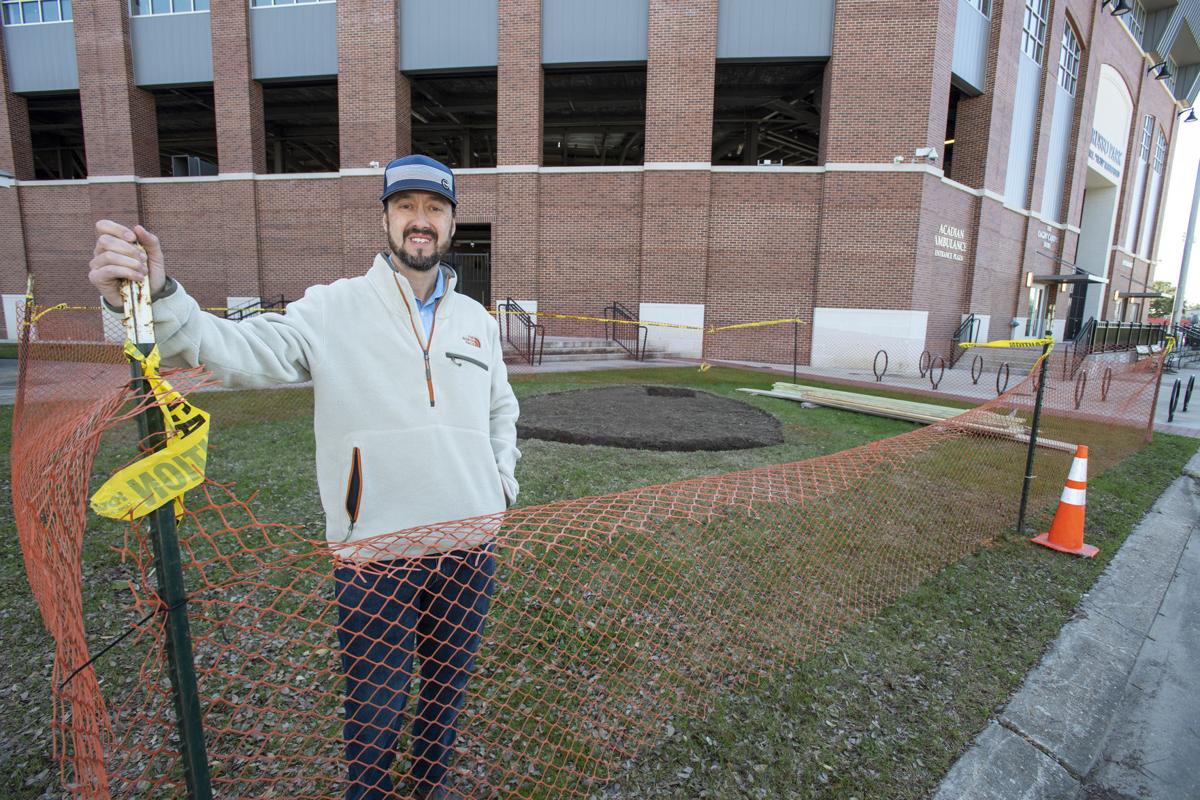 Former UL pitcher Phil Devey, who organized a player-only funding project to construct a statue of longtime Ragin' Cajuns baseball coach Tony Robichaux, stands in front of the area where the statue will be place after breaking ground on the project Tuesday. 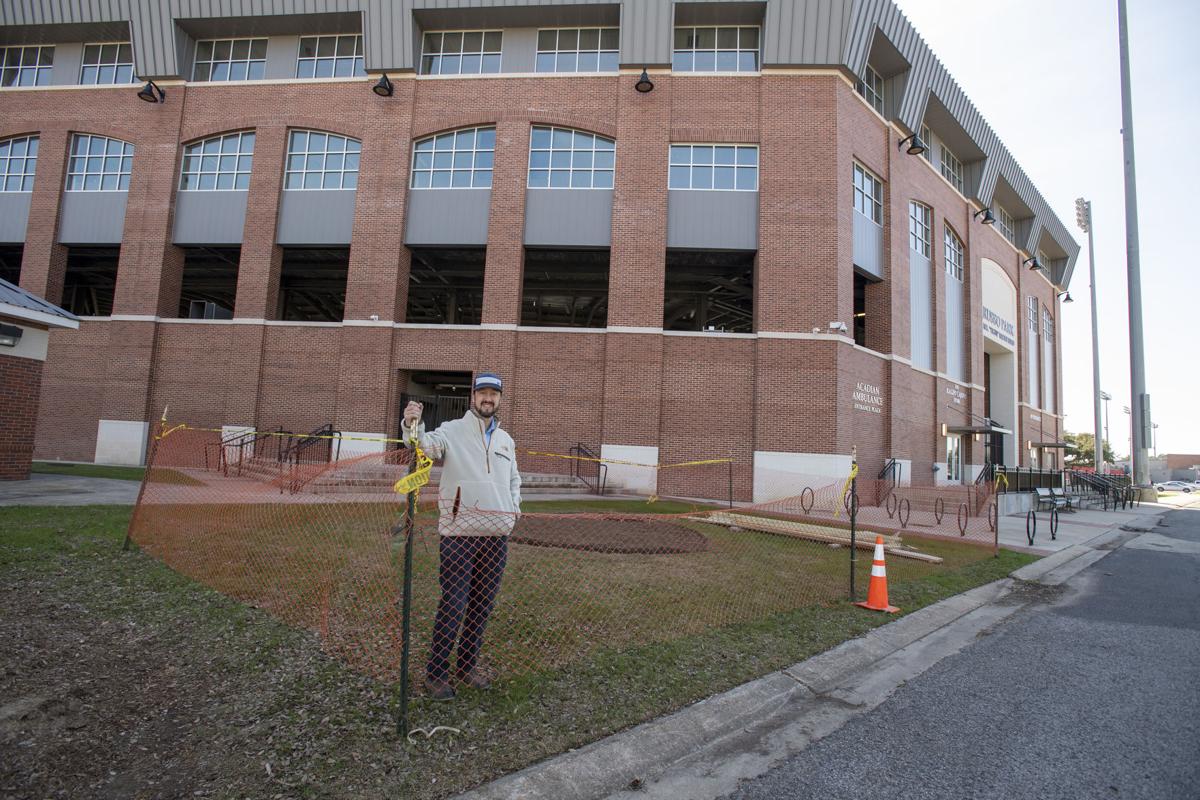 Phil Devey, former UL pitcher who has organized a former players-only funding project to construct a statue of Tony Robichaux stands where the statue will be placed in front of Russo Park. 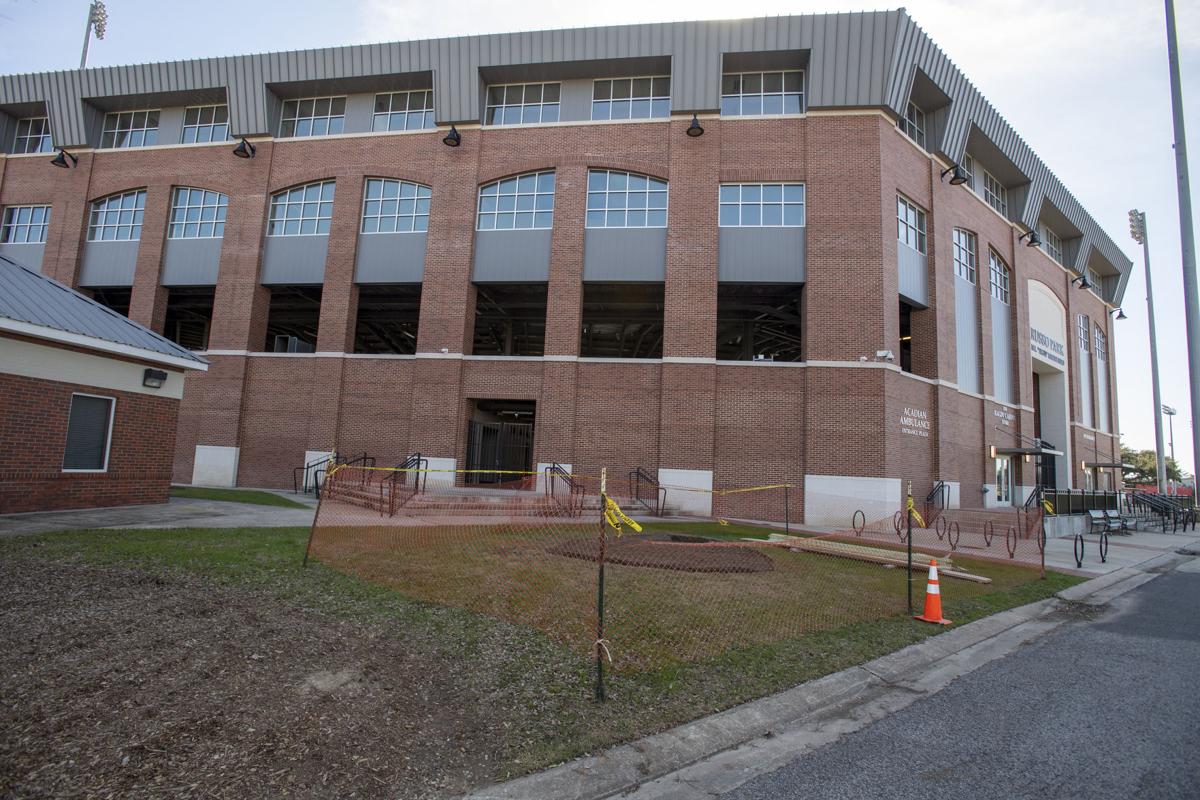 Construction fencing goes up in front at Russo Park where a statue of Tony Robichaux will be unveiled during opening weekend ceremonies at Tigue Moore Field.  Phil Devey, former UL pitcher, organized a former players-only funding project to construct a statue. 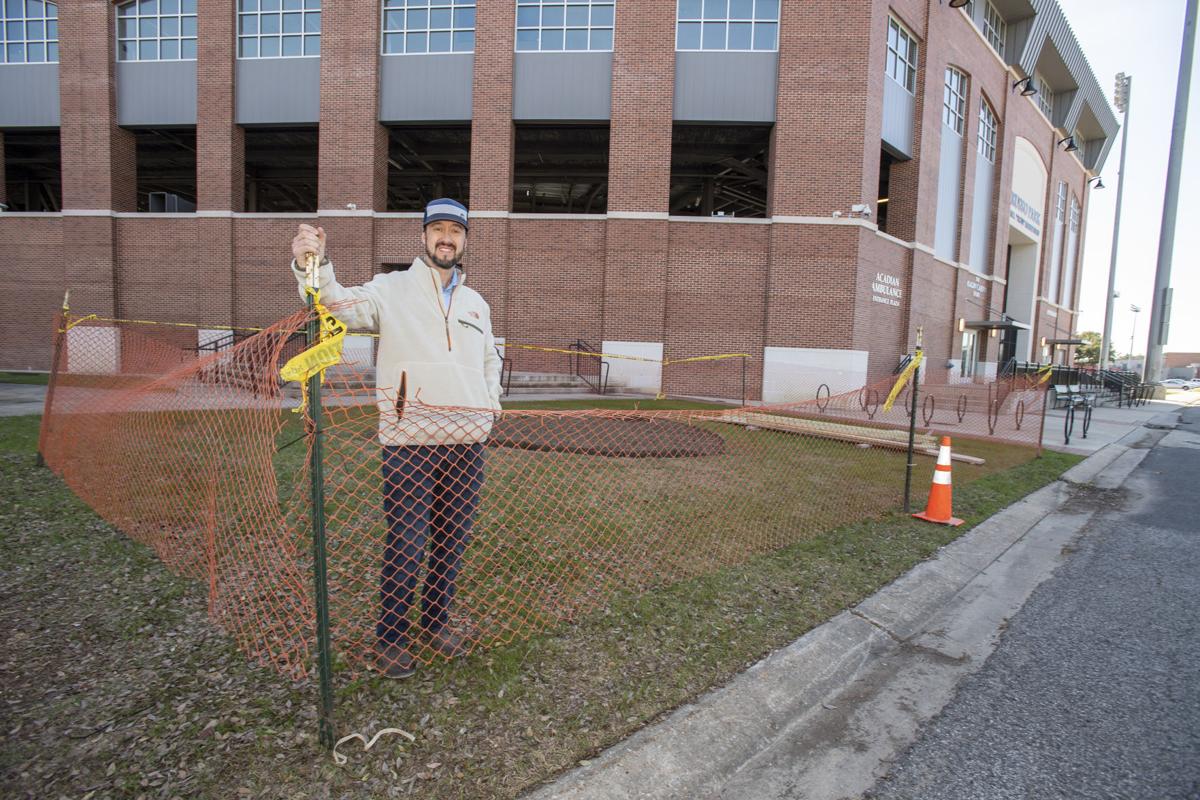 Former UL pitcher Phil Devey, who organized a former players-only funding project to construct a statue of Tony Robichaux outside of Russo Park, stands where the statue will be placed after ground was broken on the project Tuesday. 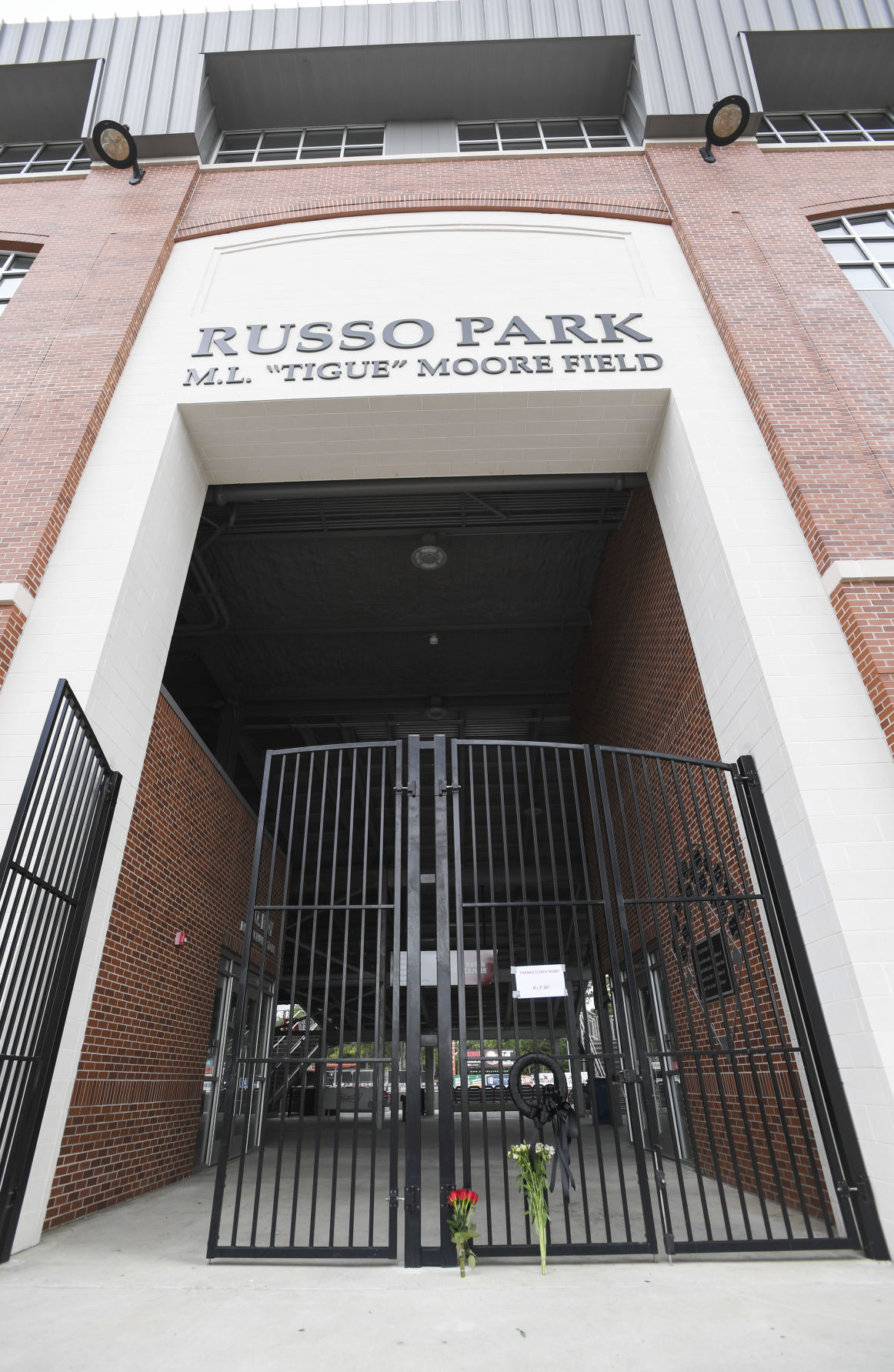 A memorial for UL Baseball Head Coach Tony Robichaux at the front gate to Russo Park on Wednesday, July 3, 2019 in Lafayette, La.. 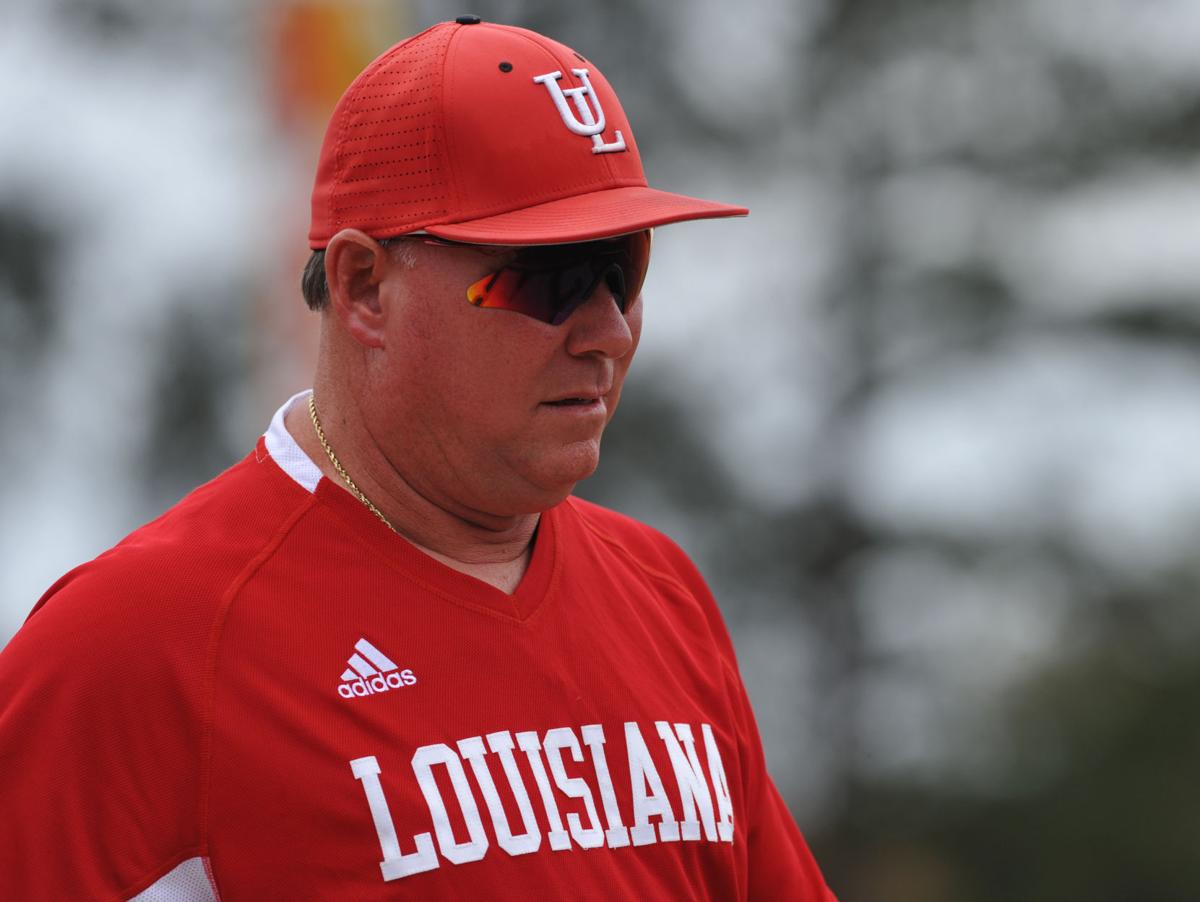 Former UL pitcher Phil Devey, who organized a player-only funding project to construct a statue of longtime Ragin' Cajuns baseball coach Tony Robichaux, stands in front of the area where the statue will be place after breaking ground on the project Tuesday.

Phil Devey, former UL pitcher who has organized a former players-only funding project to construct a statue of Tony Robichaux stands where the statue will be placed in front of Russo Park.

Construction fencing goes up in front at Russo Park where a statue of Tony Robichaux will be unveiled during opening weekend ceremonies at Tigue Moore Field.  Phil Devey, former UL pitcher, organized a former players-only funding project to construct a statue.

Former UL pitcher Phil Devey, who organized a former players-only funding project to construct a statue of Tony Robichaux outside of Russo Park, stands where the statue will be placed after ground was broken on the project Tuesday.

A memorial for UL Baseball Head Coach Tony Robichaux at the front gate to Russo Park on Wednesday, July 3, 2019 in Lafayette, La..

When UL’s longtime baseball coach died suddenly in July after suffering a heart attack, those close to Tony Robichaux were left shocked and grieving.

Even before the personal grieving waned, however, there was talk among former players about the best way to pay tribute to the iconic coach.

Former Ragin’ Cajun pitcher Phil Devey knew he had to do something to honor the man who meant so much to him.

“The hardest thing when something like that happens is sitting around feeling useless and feeling like you want to do something, but at the end of the day what can you do besides being supportive of the family?” Devey said.

Devey wanted to go beyond the customary condolences.

In his mind, his coach deserved a statue in front of the ball park he spent 25 years laboring to upgrade and utilize to teach life lessons.

The first step was getting approval from the Robichaux family. Once that was in place, Devey’s project of a lifetime was under way.

“When the green light happened, when the family approved it, everything stopped for me,” said Devey, who is a local business owner with a wife and three children. “This became the No. 1 most important project to do. There was no consideration to anything else that I had going on in my life at that moment.”

That led the former Cajun southpaw who was drafted in the fifth round of the 1999 MLB draft by the Los Angeles Dodgers to his next big snag in the project.

“We all know coach Robe would have never wanted a statue of himself," Devey said. "Knowing it’s something he wouldn’t have wanted, how do you do it anyway?”

After his 'trip around the bases,' legendary UL baseball coach Tony Robichaux makes it safely home

If he wasn’t already experiencing his champagne shower in the clubhouse of heaven, Tony Robichaux would have certainly been taking more mental…

It couldn't be about glorifying the man, Devey knew. And it needed to come from his former players.

The Robichaux’ family agreed the only way the project would meet coach Robe's approval is if the entire project was funded by his former players.

“My thought was if this is funded entirely by his former players and done in a way that represents him the best,” Devey said, “when it’s delivered I think people are going to see this is not a glorification of coach Robe, this is a message … so under those guidelines we felt like coach Robe would 100 percent approve.”

“I didn’t know the cost at that point (of family approval), but honestly, the cost was irrelevant,” Devey said. “It was going to get done no matter what. I knew if I could reach out to former players that they’d be supportive of it and we’d figure out a way to get it done.”

On Tuesday, Devey revealed the funding “is in” and ground was broken at Tigue Moore Field at Russo Park to start the physical installation.

The beauty of UL Ragin’ Cajuns Tony Robichaux is how he impacted the lives of people throughout Acadiana who weren’t even involved with baseball.

Any day now, Devey is expecting a call that the statue has been placed in shipping containers and is headed for Lafayette.

“I was just so fortunate to be around him,” Devey said when asked why the project was important to him. “To have him in my corner since I was 19 all the way to the time he passed, knowing he was just a phone call away for anything I ever needed ... how do you thank a man for that? It’s impossible.”

Every step of the way, the project seemed destined to Devey, even choosing the sculptor. Devey admired the Steve Gleason statue in front of the Superdome in New Orleans, so he searched for that sculptor online.

Amazingly, Hanlon already had Robichaux on his mind when Devey emailed him out of the blue two months after the coach’s death.

The sculptor told Devey he had met someone from UL at a conference several months before Robichaux’s death. Somehow Robichaux was one of the topics of conversation. His story caught Hanlon’s attention and he even viewed some of Robichaux’s messages on YouTube.

“I really think it’s an emotional statue for him,” Devey said. “I feel it in my heart, this is not a business transaction for him or for me. This is a destined piece.

“This is what he was built for, this is what I came to this place to become part of. It’s just a great feeling to have for him and for us. I think we were meant to meet together and be part of this.”

Foote: Tony Robichaux's heart of a servant is what saved UL's baseball program

In the summer of 1994, UL Ragin’ Cajuns baseball was at a serious crossroads.

“It’s really an honor to be a part of it,” Devey said. “Outside of my own family, this is the greatest thing I’ve ever done. I don’t see anything ever topping this. For me personally, where I came from and coming here and now today being involved in this, it’s just unbelievable to me.

“It’s really amazing. It’s the proudest thing I’ve ever done and I know a lot of the guys who are involved in it feel the same way.”

During the process, Devey said there have been moments of fear about what the statue was going to look like between him and Robichaux’s wife, Colleen.

Those fears were put aside when Colleen Robichaux received a Bible devotional in the mail.

“She read it to me,” Devey said. “It couldn’t have been more appropriate. The premise of it was how you are clay and God is the potter. He is responsible in molding you into the person you need to become and you need to trust in his hands and his vision.

“When she read that, the weight lifted off. We put our trust in God’s hands that he sent us the right person and he will do the absolute best job that he can possibly do.”

Devey relayed that story to Hanlon.

“I read that passage to the sculptor and he started crying on the phone,” Devey told, “and I told him, ‘Man, I don’t want to put any pressure on you, but from what I’m reading, this says you’re God and we’re at your mercy.’ ”

Devey said the only other potential obstacle in the project was if the university refused to allow it. However, a visit with athletic director Bryan Maggard went very well.

“This project is extremely special,” Maggard said. “This will be my first experience with something like this. It continues to speak to the impact Tony Robichaux had with everybody he came in contact with.

“So am I surprised? No, because of all the relationships he built and the impact and influence he’s had on so many people and the love that he’s instilled in people.”

Devey has wondered many times what Robichaux’s expression would be when the statue is unveiled.

Justin Robichaux, the oldest of the coach's two sons who, along with younger brother Austin, played for him at UL, said he can’t wait to see the look on his mother’s face when the statue is unveiled.

“When I saw the rendering of it, it was kind of numbing,” Justin Robichaux said. “It kind of shakes you to the core. It’s definitely something he would approve of. It’s something that is going to be invaluable to the family moving forward and we’re completely humbled to be apart of it.

“We’re going to be indebted forever to Phil for fighting so hard to make this happen. It’s such a great piece of history before our own eyes.”

For Devey and the Robichaux family, the statue had to forever portray the values Robichaux stood for so strongly throughout his career.

“I don’t think there’s anything that could represent physically what he meant to us collectively as players better than that,” Devey said.

No, there will never be another Tony Robichaux.