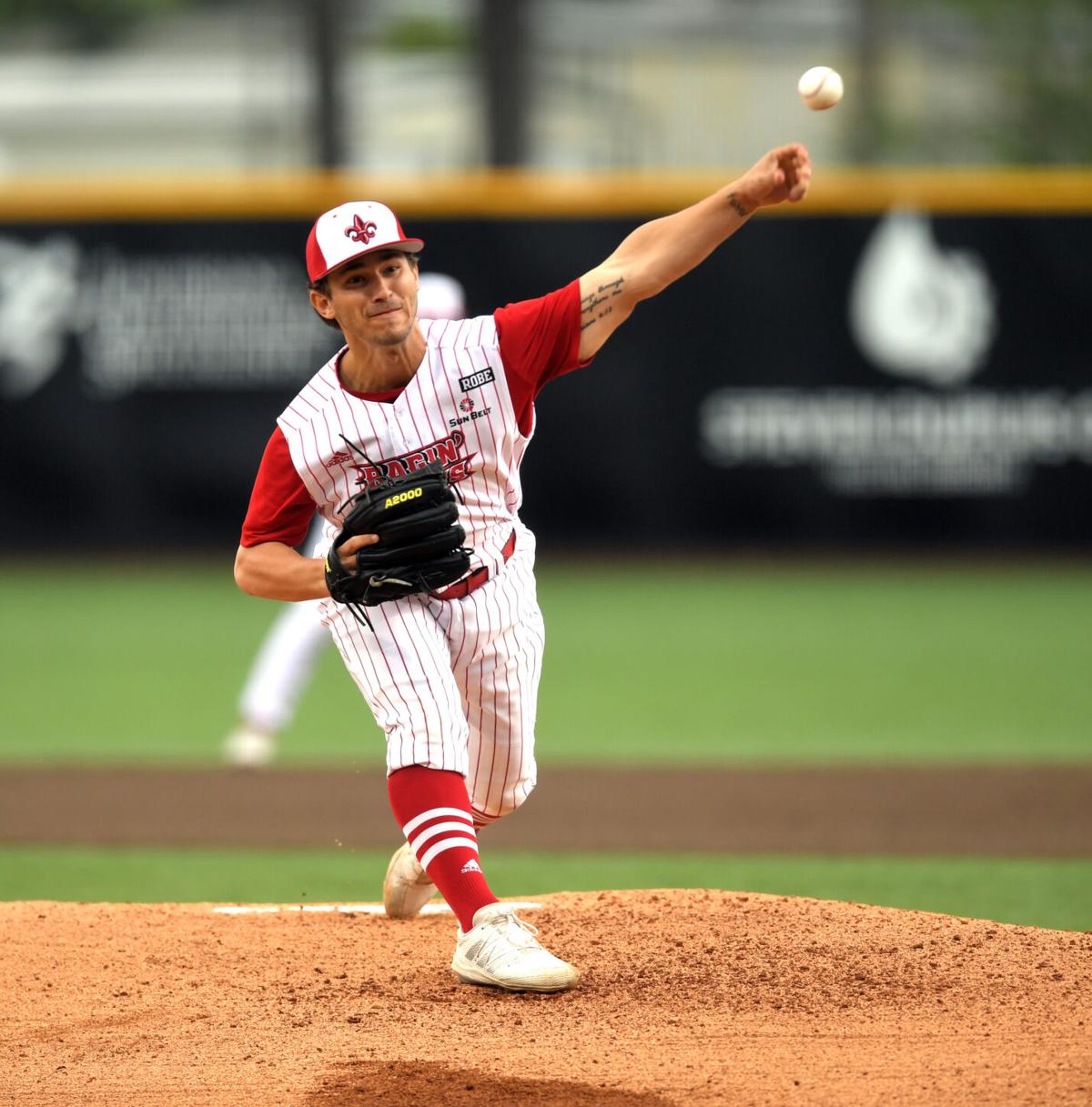 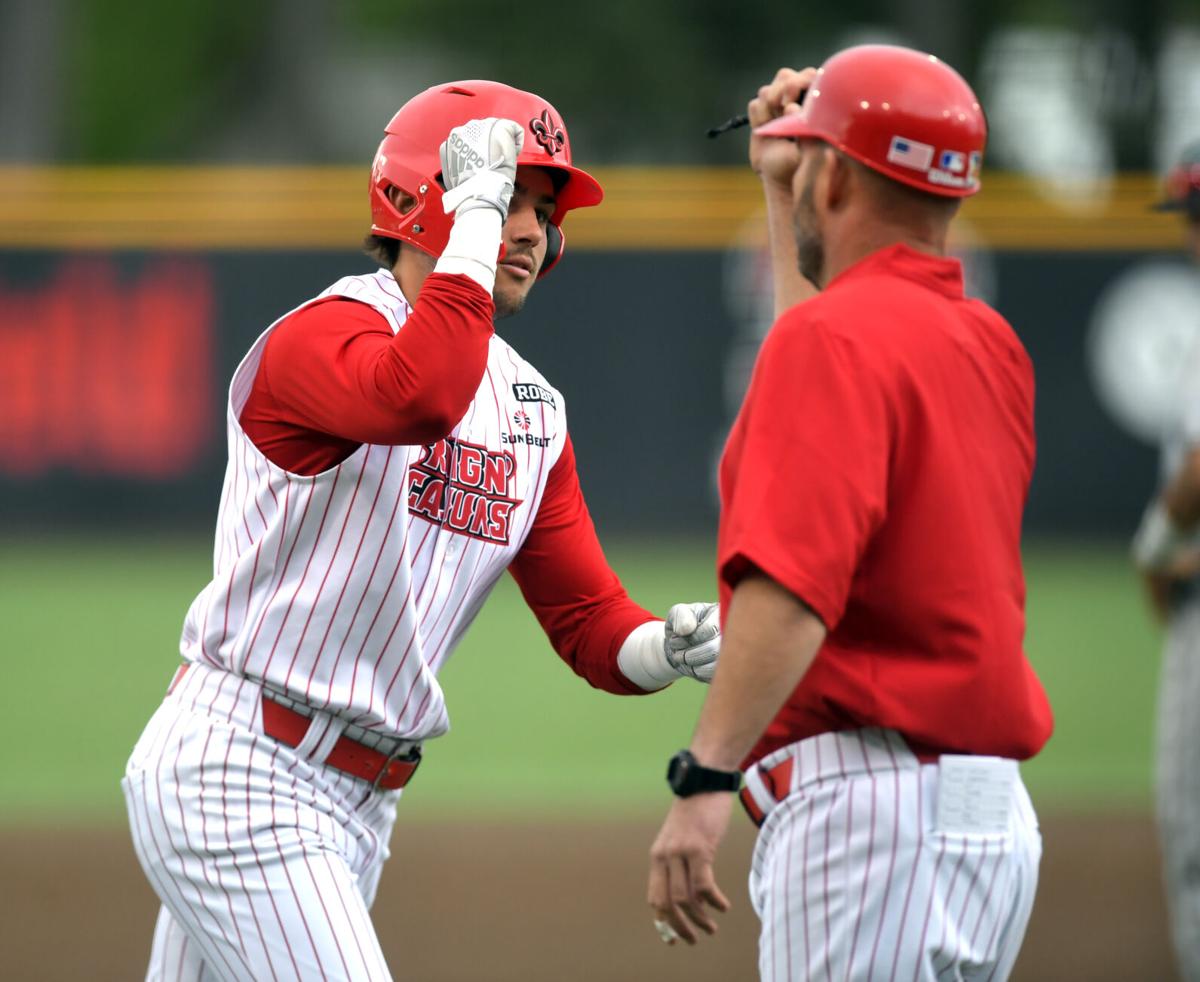 UL batter Ben Fitzgerald, left, shown here celebrating a home run against Coastal Carolina earlier this season, has been the best bat in the Cajuns' lineup throughout the season.

UL batter Ben Fitzgerald, left, shown here celebrating a home run against Coastal Carolina earlier this season, has been the best bat in the Cajuns' lineup throughout the season.

It was almost a carbon copy of the previous day's game played between UL and Coastal Carolina at Russo Park.

Only this time, it was the Ragin’ Cajuns smiling.

This time, it was the Cajuns riding great starting pitching and the long ball to a 5-3 victory Sunday.

Making it sweeter for UL, though, is this one was the rubber game of the weekend Sun Belt Conference series.

The game ended on a strikeout with the tying run at second base — exactly like Coastal closed off Saturday’s 5-3 win after hitting two home runs.

“Same score, bases loaded, first out in the nine and a strikeout to end it on a breaking ball,” UL coach Matt Deggs said. “It’s a crazy game. I guess that’s why it’s so addictive. I’m proud of our guys, though. Boy, they deserved that.”

In an unusual scenario, the two teams are now scheduled to play an 11 a.m. non-conference contest Monday.

“I loved the way we played (Saturday),” Deggs said. “I didn’t even consider it a loss. I know it is on the scoreboard and on the stat sheet, but I consider it us playing really good baseball and so did they.”

“I tried to bunt first pitch and second one (pitch), I think he hung off-speed, and I actually got a hit-and-run on that,” Fitzgerald said, “so again just trying to put the ball in play. I got a little bit lucky I guess.”

Two batters later, Carson Roccaforte took his turn with a solo blast in a similar spot.

Fitzgerald then unloaded another one — only farther this time — to lead off the third for a 4-0 lead.

UL got an unexpected insurance run in the fourth. After two strikeouts, Kevin Fitzgerald singled to right ahead of Anthony Catalano’s RBI double for a 5-0 cushion.

“I thought that was unsung big time,” Deggs said of the insurance run. “That was gigantic.”

That run support seemed fitting for the start UL got from left-hander Austin Perrin, who got his first win of the season after his second fantastic start.

Perrin gave up a one-out single to Fox Leum in the third, but he was quickly erased on an inning-ending double play. Perrin wouldn’t allow another baserunner until the seventh inning.

Despite facing the minimum through six, however, he ran into trouble in the seventh.

“Just from being here at 7 in the morning to fix the mound and fix the visitors mound, and tearing a lat muscle and the all rehab and sitting out a year,” Deggs said of Perrin. “There’s just a lot that goes into the makeup of that kid. He’s just very, very tenacious. He’s been knocked down and gotten back up and served just about every role you can serve here.

“I’m just really proud of him. He deserves all the success he gets.”

The Chanticleers just wouldn’t go quietly, chasing him with a two-run triple by Nick Lucky to narrow the gap to 5-2.

His effort looked better than his final line of allowing three runs on three hits, one walk and striking out six in 6 2/3 innings.

“I honestly thought he’d take it through the finish line,” said Deggs, who said Perrin’s off-speed approach counteracted Coastal’s big-eyed lineup with the wind blowing out. “His off-speed pitches — his changeup in particular — it was just devastating to them. Then probably the icing on the cake was he had enough fastball and fastball in to his glove versus the righties to keep them off balance.”

Connor Cooke was greeted with a bloop RBI single from Cooper Weiss to get Coastal within two runs.

But after a strikeout ended that threat, Cooke enjoyed a 1-2-3 eighth to set up the photo finish in the ninth. Coastal got two hits and a walk to load the bases, but Cooke struck out the game’s final two batters to secure the win.

“I put Connor right up there with AP (Perrin),” Deggs said. “I love that kid like a son.

“He loves to compete, he’s got great makeup and great stuff and just like AP, he deserves everything. Everything that happens for him, he deserves it because he’s gone out and earned it.”

There were many special aspects of UL’s 7-0 victory over Coastal Carolina on Monday at Russo Park.