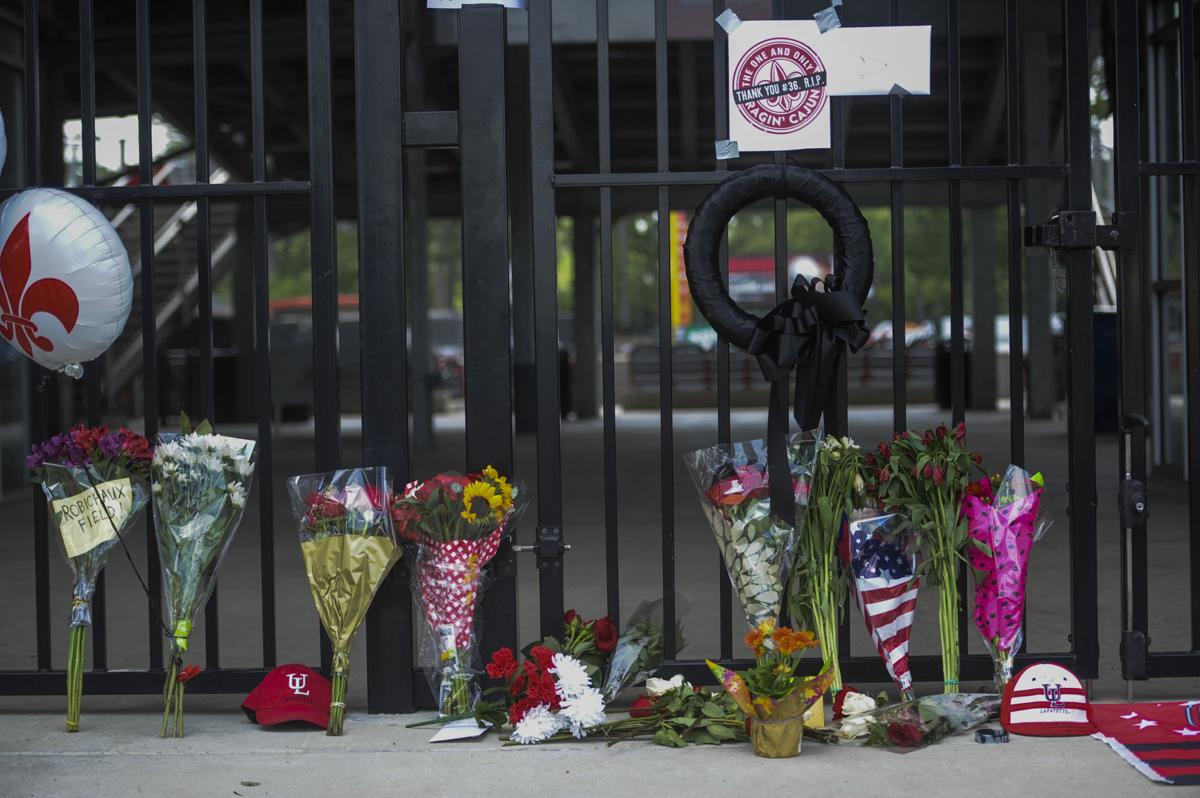 A memorial of flowers at the gates to Russo Park celebrating the life of Tony Robichaux on Thursday - one day after Robichaux died following two heart surgeries. 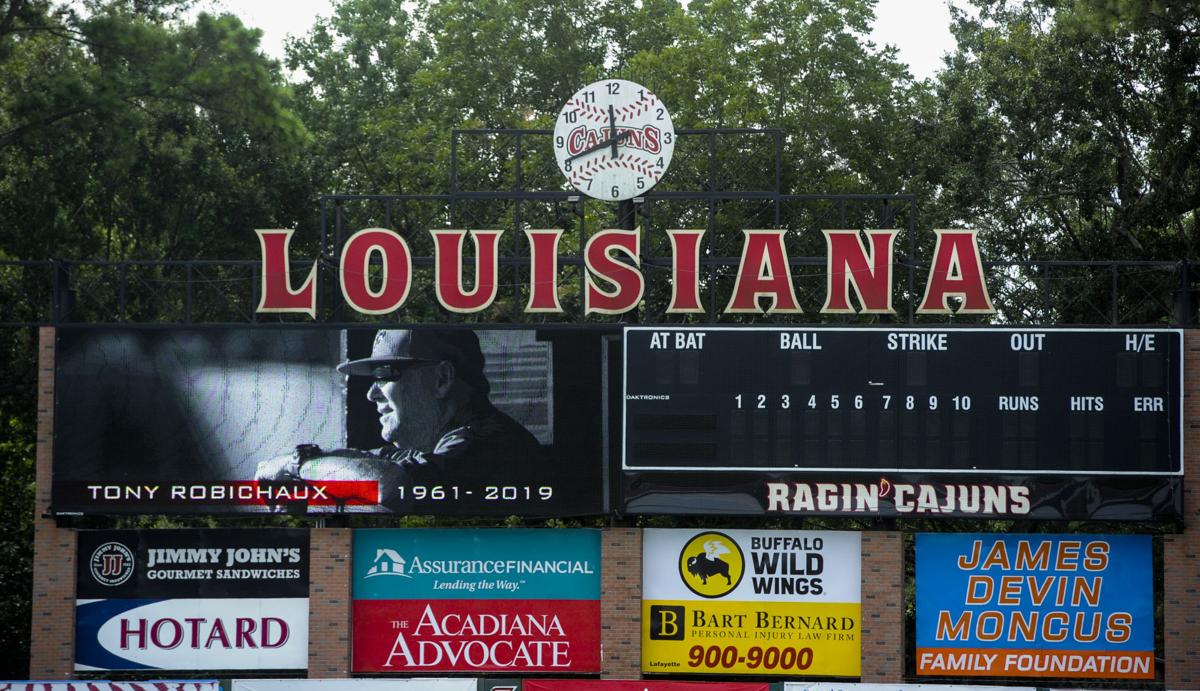 Fans of UL baseball gather at the gates to Russo Park celebrating the life of Tony Robichaux on Thursday.

A memorial of flowers at the gates to Russo Park celebrating the life of Tony Robichaux on Thursday - one day after Robichaux died following two heart surgeries.

Fans of UL baseball gather at the gates to Russo Park celebrating the life of Tony Robichaux on Thursday.

The beauty of UL Ragin’ Cajuns Tony Robichaux is how he impacted the lives of people throughout Acadiana who weren’t even involved with baseball.

But if you talk to his players, there was a unique bond between them and their former coach that's just hard to explain.

Funeral arrangements have been made for Tony Robichaux, UL's head baseball coach, who died Wednesday at 57.

Robichaux died Wednesday at Ochsner Medical Center in New Orleans after two heart surgeries following a heart attack on June 23. A visitation will be held Sunday from 3 p.m. to 9 p.m. at the Cajundome Convention Center with a 7 p.m. rosary. The funeral service at Our Lady of Fatima Catholic Church will be held Monday after visitation there from 10 a.m. to 2 p.m.

“I’ve been telling people that you just don’t understand what it’s been like having played for him and being around him,” said Jason Morvant, who played on Robichaux’s first teams at McNeese State.

Former UL pitcher Hunter Moody (2005-08) said it would take hours to explain it, but he tried anyway.

Foote: Tony Robichaux's heart of a servant is what saved UL's baseball program

In the summer of 1994, UL Ragin’ Cajuns baseball was at a serious crossroads.

“I think what it comes down to is all of them will have a moment, not just in two, three or four years of playing for him, but I think everybody has gone through a trial or tribulation in life — a valley so to speak — that Robe has been there to step up and give us encouragement and words of wisdom,” Moody said. “I think that’s what’s really special.

“He kept an interest in all of his former players and was genuinely concerned about them. He loved them. I think what the general fan doesn’t see is how he walked with us all through life. The lessons we learned from him are all intertwined in everything we do on a day-to-day. And also to have him to be a support figure in a down time in life. Each individual player’s story is different, but it’s all impactful to everybody.”

For Sport Voorhies, those instances have come up since playing in 2003-04 and then serving one year as a graduate assistant.

“I’ve had some issues since then where I’ve gotten in trouble,” Voorhies said. “The first voicemail I got on my phone was Coach Robe saying, 'I love you even more than I did yesterday. Come to my office and let’s talk and figure this out.’

“I still was going to his office every couple of weeks. He’d basically humble you in a few words.”

Wednesday was another in a series of tough days for Paul Mainieri in the past year.

Voorhies said his relationship with Robichaux changed during an intrasquad scrimmage one day. Voorhies struck out with a runner at third and less than two outs and then made an error in the field, so Robichaux made an example of the former Lafayette High standout.

“He shut down practice and made us run 12 laps in our cleats,” Voorhies remembered. “So he came out and just lit me up. He called me out in front of everybody. I just looked at him and said, ‘Yes sir, yes sir.’ ”

Only in his next at-bat, Voorhies hit it “to like Albertson’s” and his first reaction was to look Robichaux in the eye and tell the coach something he shouldn’t have said.

Social media users went online to show their love and support after the passing of UL baseball coach Tony Robichaux.

After practice, Robichaux carefully reviewed before the team his interactions with Voorhies that day.

“So I’m thinking I’m about to call my Dad and tell him I got kicked off the team,” Voorhies said. “But he looked at me, and said, ‘That’s what I need to win. That’s who I want on my team.”

He had failed, took it like a man and got better from it.

Of course, it doesn’t take a player failing for them to have learn valuable lessons from Tony Robichaux.

Tony Robichaux, the highly regarded leader of the UL Ragin' Cajuns' baseball program for more than two decades and the all-time winningest coa…

Voorhies said he received a text shortly after Robichaux died Wednesday from a former walk-on who was leaving the program and told Robichaux of his family situation.

“He said that last hour of talking to coach Robe got him through the next four or five years of his life,” Voorhies told. “He said he had never told anyone that, but that he felt like I needed to hear that.”

Making Morvant even more impressed with Robichaux’s coaching career in these sad days is fully comprehending how proficient the Crowley native was at mentoring even as a 25-year-old head coach at McNeese State in 1988, beating the Ragin’ Cajuns in the NCAA Stillwater regional.

UL baseball coach Tony Robichaux may not have been physically present at Russo Park on Tuesday evening, or had anything to do with the planning.

“I was 18 years old that year,” Morvant said. “When you’re young, you don’t really understand. But he was young too. He was 25. We always thought of him as somebody who was like in their 40s, because he had so much knowledge and so much understanding of the game, of game and of the game of life.

“How many people in the world were like him at 25, seriously? It’s just crazy to look at where I was at 25 and where he was at 25. It just didn’t make sense how much knowledge he had. We knew it at the time, but we really didn’t understand it until we got older.”

The other thing about Robichaux that his players learned quickly is there are very few short conversations. Morvant remembered a brief visit just meant to congratulate his old coach for being named UL’s new coach back in 1994 that lasted two hours.

“But his message was amazing,” Morvant said. “I was 24 and he was only 31, but it was always just an amazing message when you talked to him.”

Voorhies said one of his 15-minute exit interviews turned into a two-hour lecture filled with leadership graphics and motivating analogies featuring bell-cows.

“I’ve always known how special Tony was,” Morvant said. “I’ve been knowing it, but this brought it to life hearing from all of his former players all the things I’ve been knowing and thinking all of these years.”

“His impact and his legacy is going to be long-lasting — long after you and I are gone,” Moody said. “Coach Robe is UL baseball. He wasn’t the founding father, but he’s the main figure.”

Ask Morvant and there’s only a half a Mount Rushmore needed when it comes to discussing college baseball in Louisiana.

“I thought he was a living legend last week and I think he’s a legend now,” Morvant said. “To me, Skip (Bertman) and Robe are the two legends of baseball in this state. No disrespect to anybody else, but those two guys are amazing. Tony was just incredible.

“When I got the news (of his death), I was on a runway to catch a plane to go to Cancun and I just lost it, and I know I’m not alone in that. The guy just impacted my life so much.”

Funeral arrangements have been made for Tony Robichaux, UL's head baseball coach, who died Wednesday at 57.

There will be a memorial service from 3 to 9 p.m. Sunday at the Cajundome Convention Center, with a rosary being said at 7 p.m.

From 10 a.m. to 2 p.m. Monday, there will be a viewing and visitation at Our Lady of Fatima Catholic Church. The funeral service will begin at 2 p.m. at the church.

For parents of young men he coached, UL baseball's Tony Robichaux was a dream come true

When parents send their children to a university as student-athletes, it's with the hope that their coaches will have a positive impact on the…