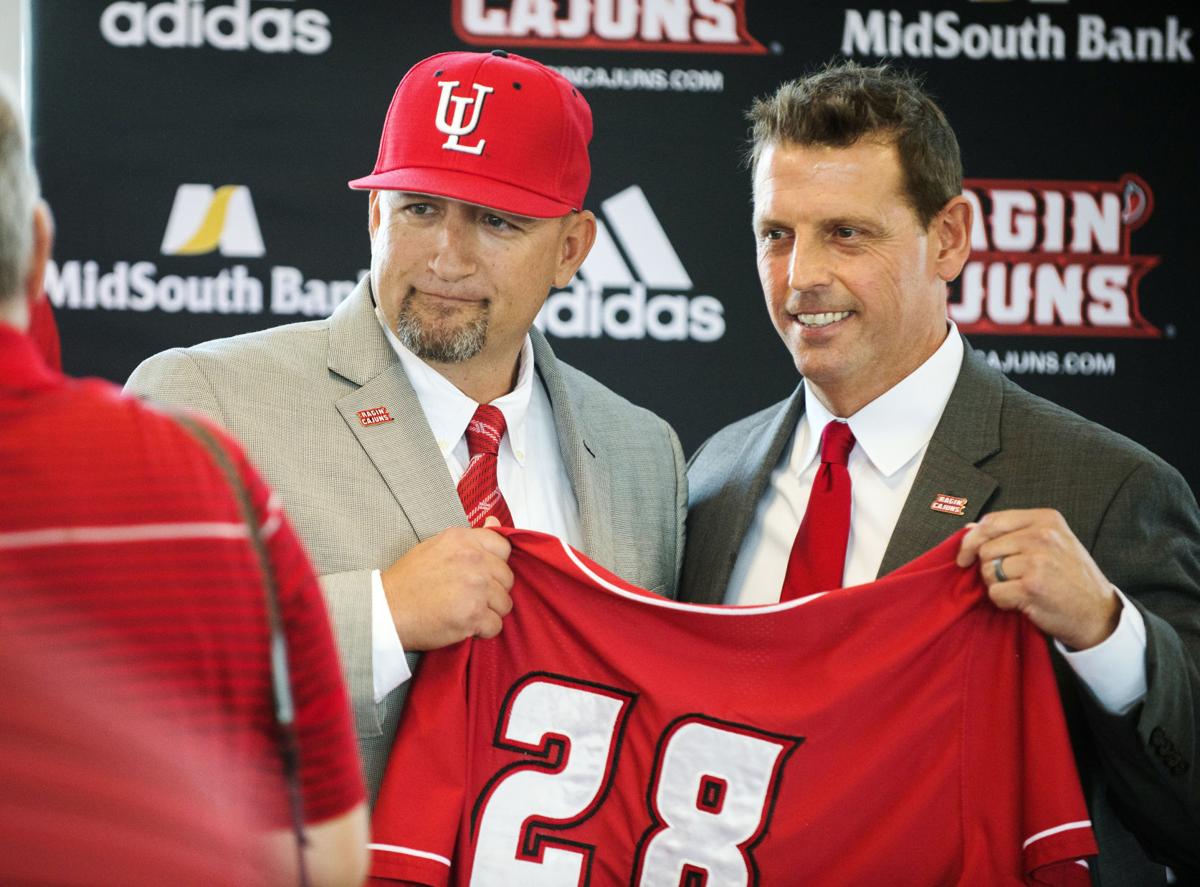 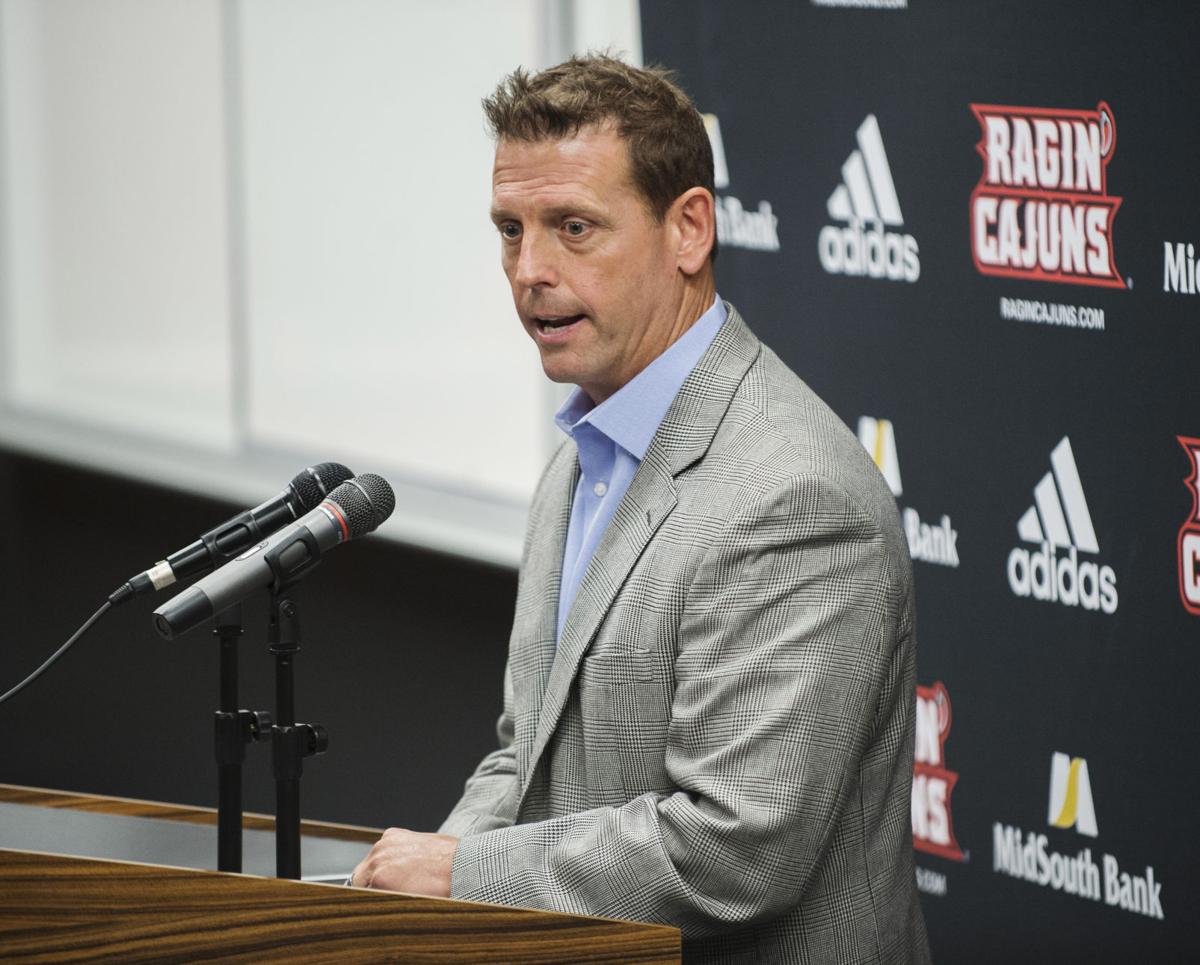 UL director of athletics Bryan Maggard said he's about to lead the university's largest fundraising effort ever in 2020 to complete much-needed facility renovations. 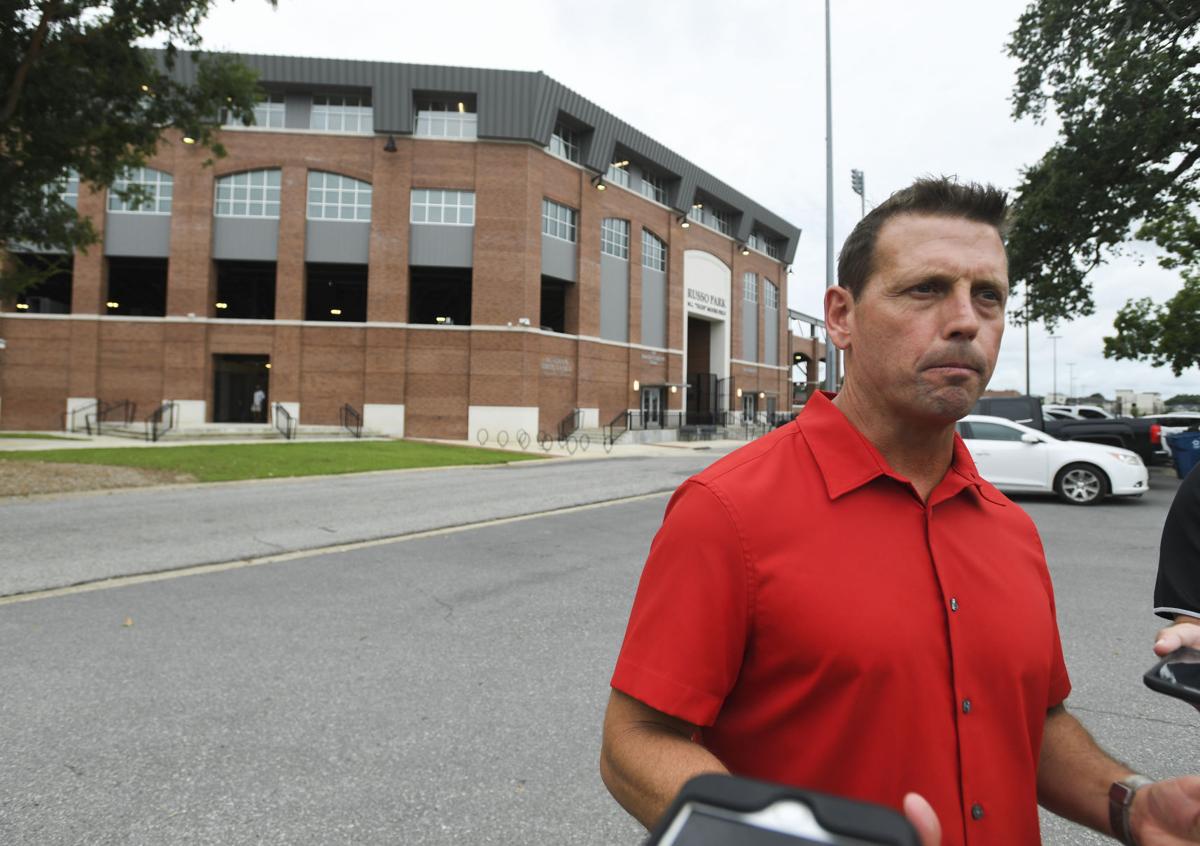 UL athletic director Bryan Maggard, pictured here speaking to the media during the week baseball coach Tony Robichaux died in July, is hoping 2020 brings a lot more joy after all the tragedy the athletic department endured in 2019.

UL director of athletics Bryan Maggard said he's about to lead the university's largest fundraising effort ever in 2020 to complete much-needed facility renovations.

UL athletic director Bryan Maggard, pictured here speaking to the media during the week baseball coach Tony Robichaux died in July, is hoping 2020 brings a lot more joy after all the tragedy the athletic department endured in 2019.

The calendar year 2019 was one of the most trying times in the history of UL’s athletic departments.

The tragic losses of softball assistant coach Geri Ann Glasco in an late January automobile accident and of legendary baseball coach Tony Robichaux to heart failure in early July left a cloud of despair over the university’s athletic department at times during 2019.

“A lot of tragedy … I think more than any department, university or community should ever have to face to be honest,” UL athletic director Bryan Maggard said. “But yes, I’m extremely optimistic about what the future holds here. We have a lot of work to do. That’ll certainly be our focus in this coming year.”

Surely, 2020 will be far more triumphant for the athletic department, and like so many things in the South, the solution naturally starts with football.

In August, coach Billy Napier and his football team accepted the burden of lifting the spirits of the UL fan base after such a rugged start to the calendar year, and they delivered.

The emotionally draining 2019 year ended for football with a loss at Appalachian State and then rumors Napier could be lured away by a Southeastern Conference program.

On Thursday, as the Cajuns arrived in Mobile, Alabama, for Monday’s 6:30 p.m. LendingTree Bowl against Miami of Ohio at Ladd-Peebles Stadium, UL announced a two-year contract extension to Napier’s contract.

“No, it certainly was not driven by that,” Maggard said. “I can’t tell you when, but at some point during the season, I said, ‘We’re doing something special here, and we have a great opportunity to have an historic season. If we can do something to try to keep Billy as long as we can, we need to do that.’

“Now certainly, as his name started to garner more attention, that just solidified what we wanted to do, but I did have in my mind to do something prior to that carousel starting taking course.”

There was a time not so long ago that former UL quarterback Donnie Wallace wanted no part of his sons Deuce and Dane playing football.

Napier true to his word

The message Maggard and Napier have consistently provided is that the job in Lafayette hasn't been completed yet.

“As (Napier) and I started talking about the extension and what we wanted to propose to him, the majority of our conversation centered around the future,” Maggard said. “He and I both believe that we can position ourselves to be the top (Group of Five) program in America. Our goal is to play in a New Year’s Day Six bowl, and we think we can accomplish that here. We really do.”

To accomplish that, a lot of money is going to be needed.

Consequently, Maggard envisions this year’s primary focus being “embarking on what’s going to be the most major fundraising effort this university’s ever seen.”

Nothing better to springboard that kind of effort than the program’s first bowl win since 2014 and nailing down an 11-win season.

“I think what it does is it continues to enhance the excitement around the program,” Maggard said of a bowl win. “There’s no doubt that people want to be associated with winners. People are more likely to invest in what they perceive to be a winning program.

“I think a (bowl) win, going 11-3, beating a conference champion, only propels that level of interest and enthusiasm from your investors and your fan base.”

Renovations on the way

With football headed in the right direction, most of Maggard’s focus in 2020 will be on fundraising to provide the necessary facility upgrades.

For one, he’s an offensive lineman.

“The fundraising is going to start ASAP,” he explained. “You typically have a silent phase of fundraising, where you go out and try to identify those lead gifts to kick the projects off. You need that initially. You’ll see us do that much sooner than later and from there, I’m hopeful that’ll catapult us in to getting everything accomplished.”

The biggest part of the vision is to renovate Cajun Field, which includes a new west tower that will house administration with club level suits, “21st century” seating in the west lower bowl, a new scoreboard and even aesthetic improvements involving fencing and tailgating around Cajun Field.

But it’s not only about Cajun Field.

The vision also includes “a baseball clubhouse, we need to do some upgrades on Cajun Courts, I’d like to do some things in E.K. Long to get that renovated for our volleyball program.”

All about thinking big

All of those plans fit right into Maggard’s biggest emphasis for 2020 after a 2019 of overcoming tragedy … a much more aggressive mindset by Ragin’ Cajun nation.

“A big part of my agenda this year to going to be getting the message out there that as a department, a university, a community and as a fan base, think big,” Maggard said. “We’ve got to think big, because complacency will kill us in this industry.

For all the seniors on UL’s roster, the LendingTree Bowl against Miami of Ohio on Jan. 6 will be the final time they suit up on a football fie…

The fundraising mostly takes place out of the public’s eye. The first step in the forefront is Monday’s bowl game.

Immediately after that, “thinking big” becomes a reality with the start of softball and baseball practice later this week.

“I’m already excited about softball and equally excited about baseball on a little bit different front,” Maggard said. “I think we can do something really special this year in softball.

“It’s going to be a fun group of women to watch.”

By special, Maggard means be legitimate contenders for the national championship.

And by the way, his ambitions in baseball are the same.

“I think coach (new UL baseball coach Matt) Deggs absolutely expects to win at a high level right away,” Maggard said. “I think you’re going to see a lot of adjustments on that team from a pitching standpoint and continuing to enhance hitting. You’re going to see a more aggressive style of play and kids playing with a little bit of a chip on their shoulders.

“He’ll be disappointed if we don’t compete for a conference championship this year.”

Deggs certainly isn’t one Maggard has to push to “think big” in 2020.

“One of the first things I said to him was, ‘Matt, I firmly believe that we can win a national championship in baseball at UL. I’ve got to have a coach that feels that same way,’ ” Maggard said.

“He said, ‘Bryan, not only do I believe that, but I believe we can do it sooner than later.’ ”

Maggard’s impressive enthusiasm and drive to elevate the athletic program isn’t just relegated to football and the diamond sports.

For a senior graduate transfer like tight end Nick Ralston, it’s kind of time to do a little reflection on his decision to transfer to UL from…

“Get ready, people are going to start talking about soccer more and more,” Maggard said. “That’s a program under his guidance if he stays with us any amount of time at all that’s going to be competing for and winning Sun Belt championships, which is going to get us in the NCAA tournament, and you’re going to see Louisiana women’s soccer make a splash nationally. He’s that good.”

Like with Napier, Maggard understands that losing successful coaches is sometimes a reality for mid-major programs, but that doesn’t mean he won’t fight to keep them.

“It’s a good sign when that happens, but it does present constant challenges,” he said. “I don’t like losing in anything we do. And if we were to lose a coach to another program, in a small way, I’d consider that a loss.”

Maggard said Glasco has been recruited by SEC programs since arriving in Lafayette, and “it won’t surprise me if Matt Deggs has it happen in a short amount of time, and I think Lance Key on the soccer standpoint is going to get opportunities.”

Maggard even maintains a positive attitude in two areas where it’s tougher for mid-majors in the deep south to think big in — basketball and attendance.

“Certainly, there’s a lot of athletic programs out there that want to be really good at one or the other sport (football or basketball),” Maggard said. “For me, I would say, ‘Why not both?’ I think we have the opportunity with the history of basketball success here to do just that.”

It’s certainly possible to win big as a team if you have super talented individuals with iffy team chemistry.

In recent seasons, both the men and women’s teams can’t shake the injury bug.

“It’s been remarkable what we’ve gone through,” Maggard said. “My encouragement to Bob (Marlin) and Garry (Brodhead) is just to keep grinding.

“We have two good head coaches in those programs. They know how to win. They’ve won a lot in their time as head coaches. We just have to get healthy.”

As for the football team’s average home attendance of 18,203, including finishing out with two home crowds of 14,000 while in contention, Maggard takes that issue in stride, saying it’s a “national epidemic.”

“It’s something that’s always on my mind because attendance helps generate revenue to help accomplish a lot of these things we’re talking about,” Maggard said. “I don’t worry about it, but I continue to think about trying to find ways to reverse that trend

“(In football) I get it, it’s challenging. You’re sitting outside in the elements and there’s really no escape from that. We’re competing against that in-home experience. You can get one of those TVs really cheap today.”

Still work to do, but Napier and UL's program heading in right direction

In coach Billy Napier’s first season as head coach of the UL Ragin’ Cajuns, the program took a big first step toward respectability.

Maggard’s “thinking big” theme even extends to the Sun Belt Conference as a whole.

Maggard said the new regime is looking for a new neutral site city to host the basketball tournament, similar to baseball signing a new five-year deal with Montgomery, Alabama.

He also suggested the league should look into the possibility of a neutral site for the football title game … perhaps Atlanta.

“I think we’re getting there under Keith Gill’s leadership,” Maggard said. “I think we’ll continue to enhance. We just need to continue to find ways to elevate our sports programs.”

By thinking big, of course.

Mobile, Alabama isn’t New Orleans, but it’s not far from it.