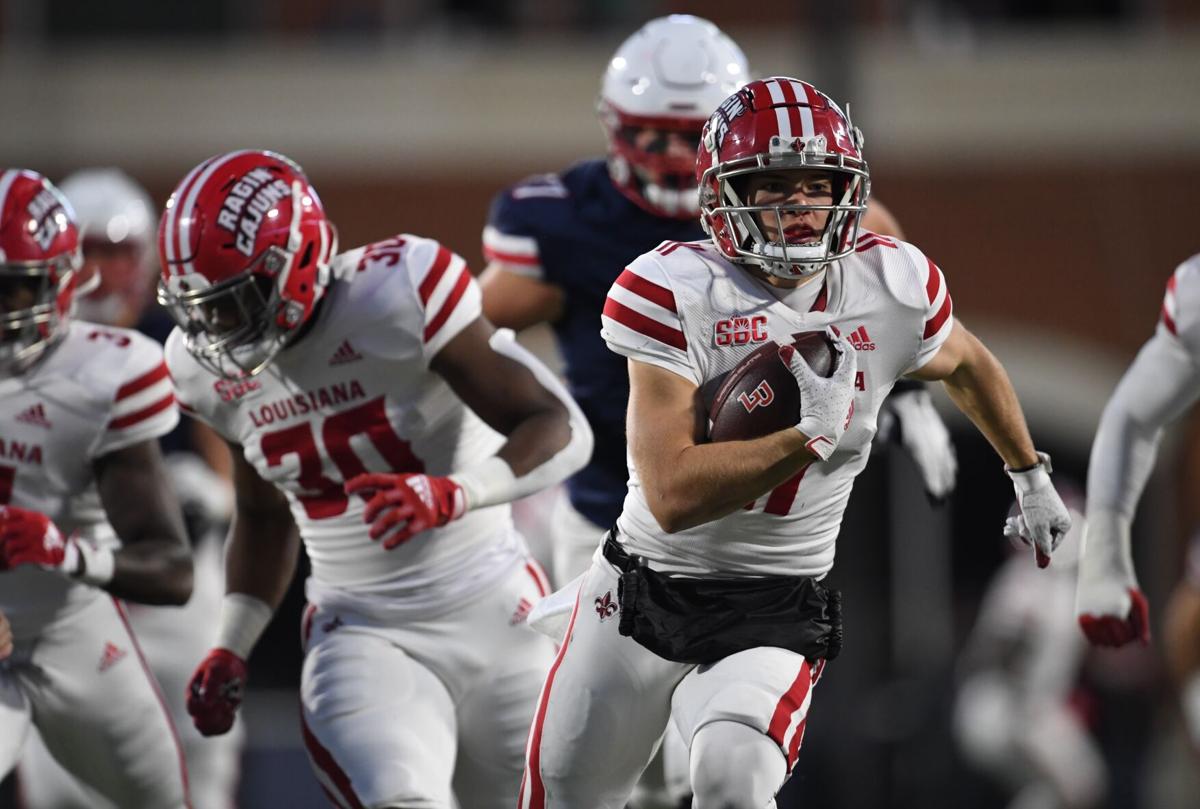 UL's Dalen Cambre (11) returns a fumble for a 26 yards for a special teams touchdown for the Cajuns at Liberty. 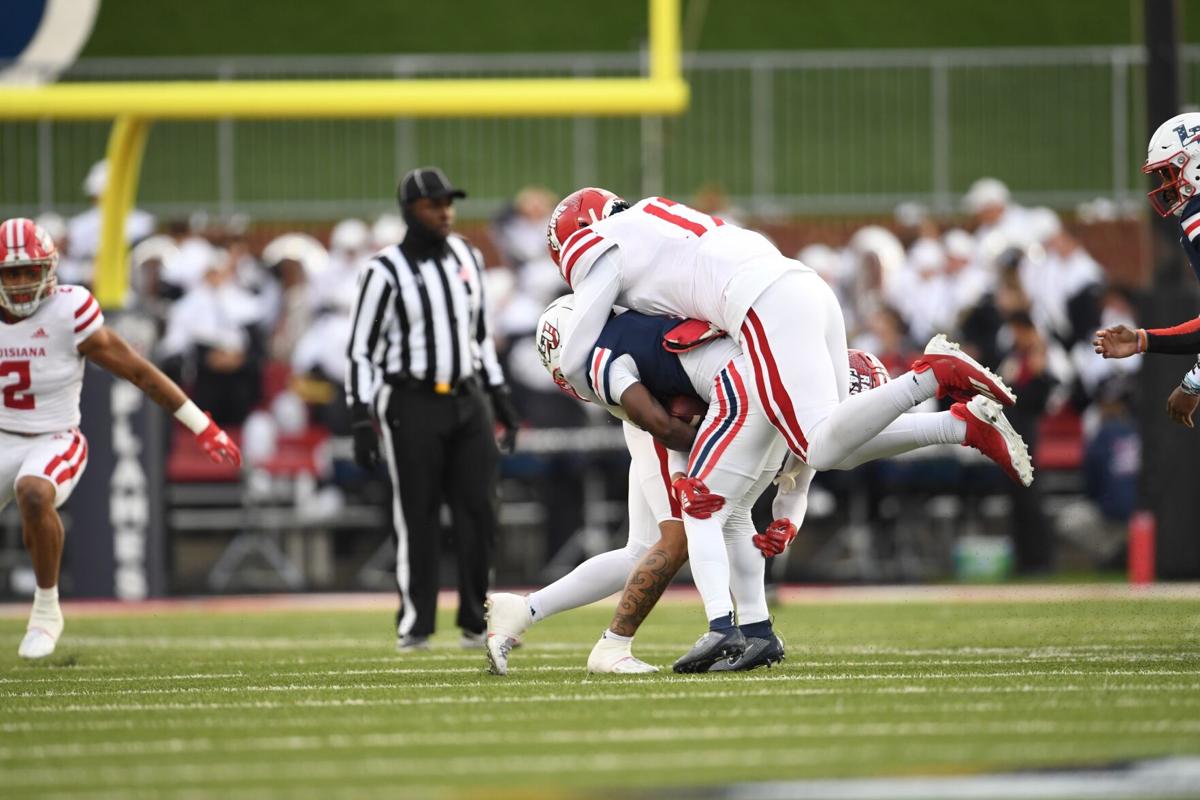 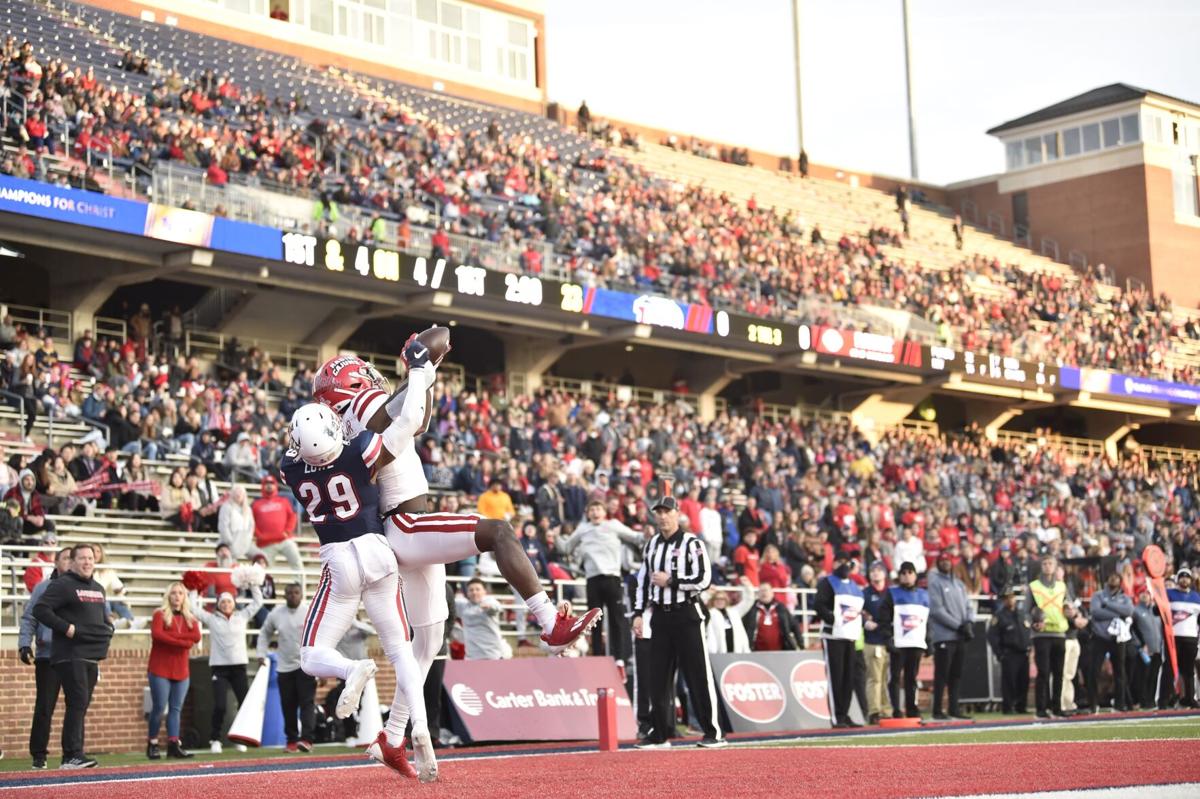 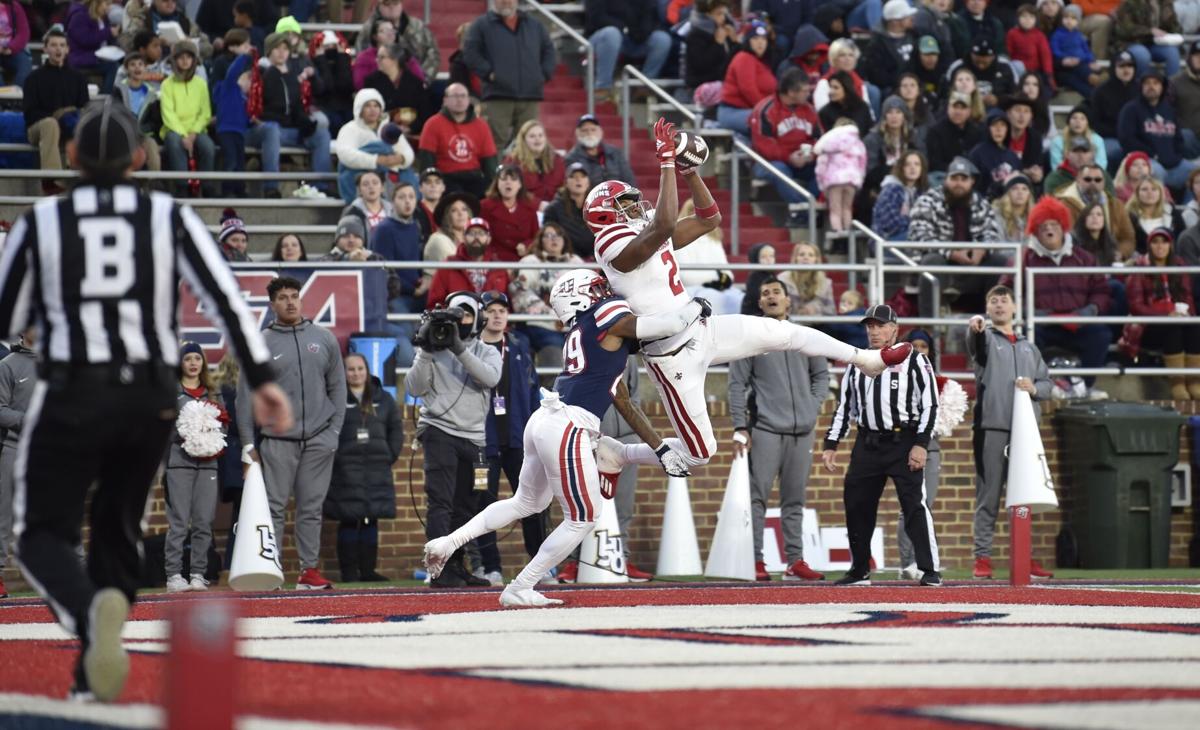 UL wide receiver Kyren Lacy hauls in a touchdown catch during the Cajuns' road win over Liberty on Saturday. 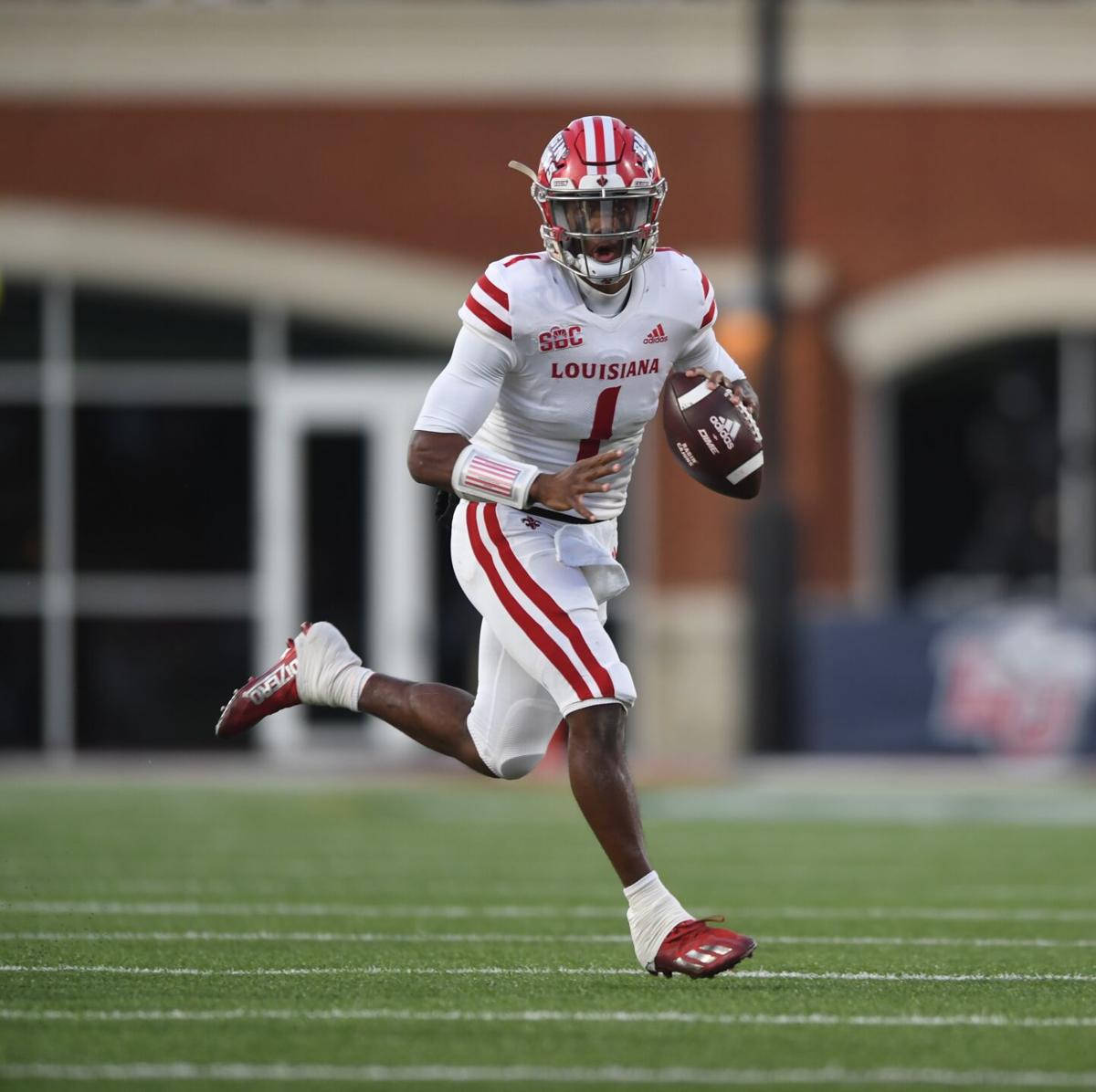 UL quarterback Levi Lewis threw three touchdown passes with no interceptions during the Cajuns' road win over Liberty on Saturday.

UL's Dalen Cambre (11) returns a fumble for a 26 yards for a special teams touchdown for the Cajuns at Liberty.

UL wide receiver Kyren Lacy hauls in a touchdown catch during the Cajuns' road win over Liberty on Saturday.

UL quarterback Levi Lewis threw three touchdown passes with no interceptions during the Cajuns' road win over Liberty on Saturday.

LYNCHBURG, Va. — Liberty’s 15-game home winning streak is over … with an exclamation point.

The No. 21-ranked UL Ragin’ Cajuns showed they were more than motivated for this non-conference contest with a 42-14 road win over the Flames on Saturday at Williams Stadium.

The win made it 10 straight victories for the Cajuns (10-1), who will play Appalachian State in the Sun Belt Conference championship game Dec. 4. But first, UL will finish out the regular season against ULM on Saturday at Cajun Field.

"Ten in a row, baby," UL coach Billy Napier said. "We were seven-point dogs at kickoff tonight, too, and our players knew that.

"This is a good group. We've got great ownership among the players. We've got a lot of guys that get it."

The defense also had seven sacks for the first time since 2014. That constant pressure against Liberty quarterback Malik Willis resulted in the NFL draft prospect hitting on only 14 of 34 passes for 162 yards with two touchdowns and two interceptions.

"Hats off to coach (Patrick) Toney and the defensive staff," Napier said. "I thought they had a really good plan, not only to rush and affect the guy (Willis), but we stayed in our lanes and when given the opportunity, we finished on the quarterback and got him on the ground.

"We did it in a lot of different ways — coverage sacks, pressures — but it was very apparent early on that we had him rattled, and we were affecting him as the game went."

UL quarterback Levi Lewis was his steady self. After the offense struggled early, Lewis completed 13 of his final 17 passes to finish 14 of 25 for 166 yards with three touchdowns and no interceptions.

Lewis sealed the victory with a 2-yard touchdown pass to tight end Neal Johnson with 14:11 left to play for a 35-14 lead.

The offense also stood strong after four consecutive three-and-outs to deliver an eight-play, 74-yard drive in 4:03 to answer Liberty’s early score in the third quarter that cut the Cajuns’ lead to 21-14.

UL went to the rushing attack, with Montrell Johnson delivering 22 yards on four plays to begin a drive. That set up a 29-yard completion to Peter LeBlanc to the Flames’ 18. Four plays later, Johnson plunged in from the 2 for a 28-14 lead with 7:44 left in the third quarter.

"Big drive," Napier said. "We did a nice job right there. I thought that was one of the biggest turn of events in the game there was that answer with some runs and a great throw and catch to Pete (LeBlanc)."

At times in the first half, the Cajuns offense scuffled badly, with a few bright spots.

After three consecutive three-and-outs, the Cajuns managed a 10-play, 41-yard scoring drive. Twice, UL had to convert on fourth down during the drive.

The first one was a 4-yard scramble by Lewis on fourth-and-3 to the Liberty 30. Four plays later, Lewis hit tight end Neal Johnson for 8 yards to the 4.

On the next play, Lewis hit John Stephens on a 4-yard touchdown pass for a 7-0 lead with 1:57 left in the first quarter.

On UL’s next drive, a 32-yard reception reintroduced Emani Bailey to the offense after he missed three weeks. Two plays later, Lewis hit a leaping Kyren Lacy on a 15-yard touchdown pass for a 14-0 lead with 14:19 left until halftime.

The Cajuns would not earn another first down in the first half, but UL still scored thanks to the specials teams.

After a 28-yard punt set up UL’s first touchdown drive, a bad snap resulted in Liberty punter Max Morgan fumbling on Michael Jefferson’s tackle, and Dalen Cambre scooped it up and raced 26 yards for a touchdown and a 21-0 lead with 9:06 left in the first half.

UL’s defense wasted an 8-yard sack by Mekhi Garner midway through the second period. Instead, Willis hit a wide-open Kevin Shaa for a 29-yard touchdown pass to narrow UL’s lead to 21-7 with 7:14 left until halftime.

The second half didn’t start out well for the Cajuns. After returning the kickoff to the 13, the offense settled for a fourth straight three-and-out.

Liberty then responded with a 30-yard TD toss to Shaa three plays after the punt to really get close at 21-14 with 11:57 left in the third.

Foote: Turns out, Cajuns were far hungrier than Flames for late non-league showdown

LYNCHBURG, Va. — As it turned out, it wasn’t the No. 21-ranked UL Ragin’ Cajuns with a motivation issue at all.