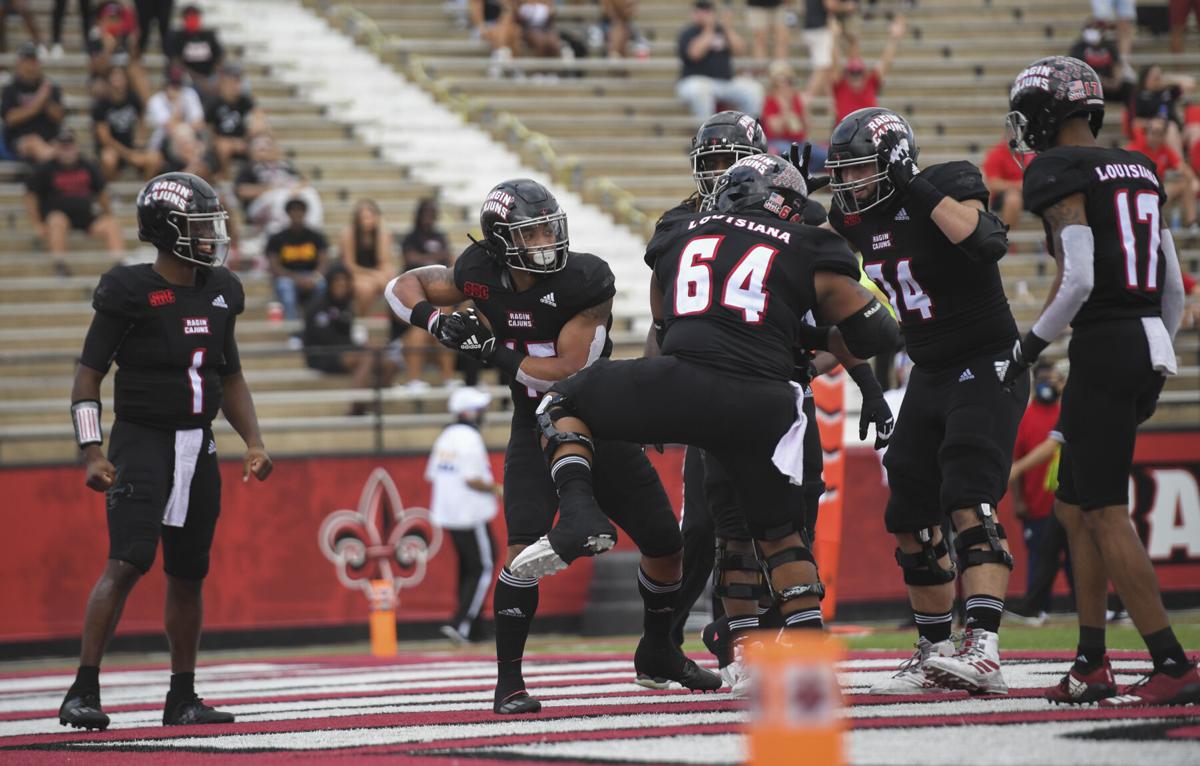 UL running back Elijah Mitchell (15) celebrates his touchdown against South Alabama, along with teammate Shane Vallot (64). 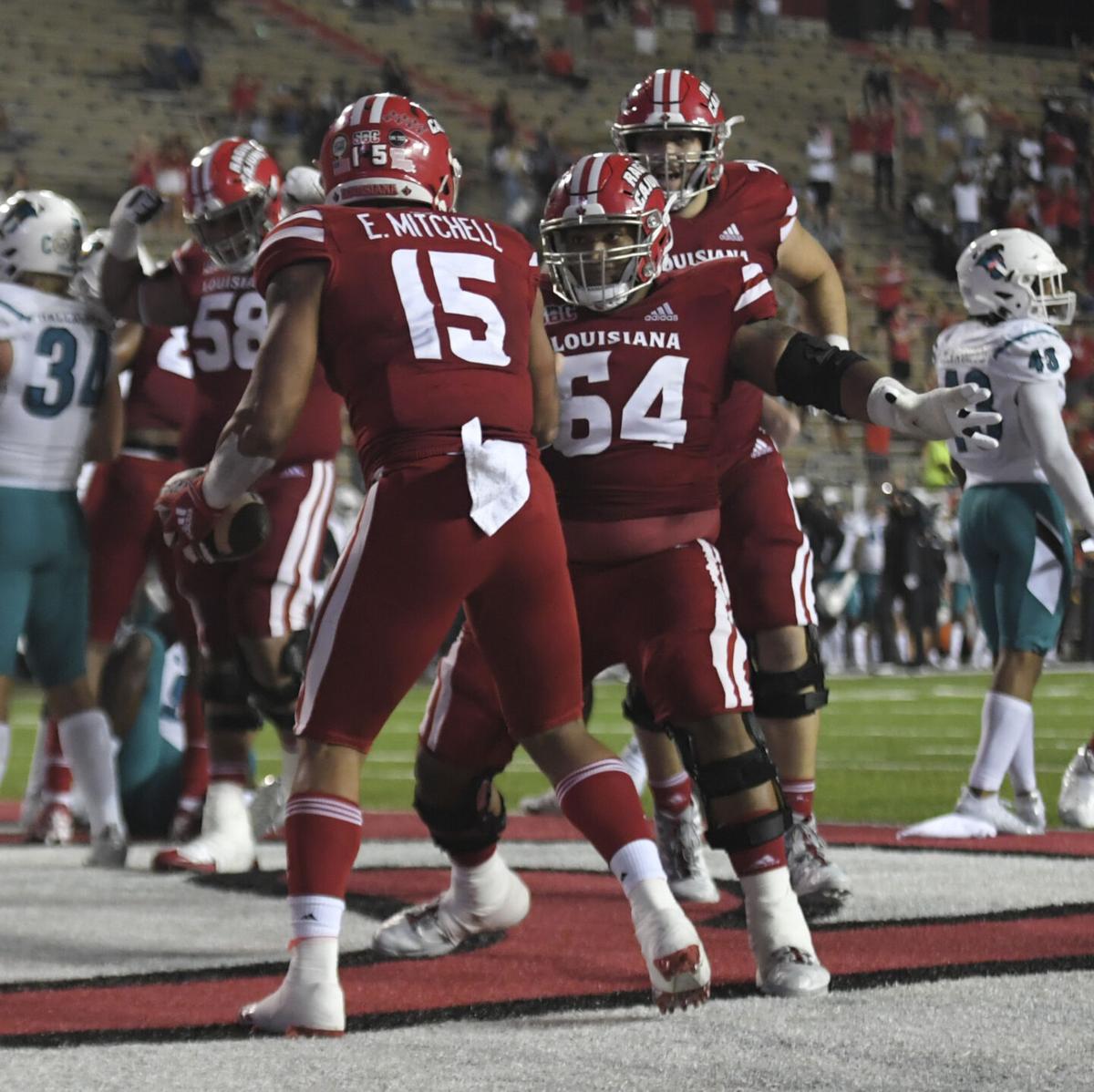 UL center Shane Vallot (64) celebrates with his running back roommate Elijah Mitchell (15) with a specialized hand shake during the Coastal Carolina contest earlier this season.

UL running back Elijah Mitchell (15) celebrates his touchdown against South Alabama, along with teammate Shane Vallot (64).

UL center Shane Vallot (64) celebrates with his running back roommate Elijah Mitchell (15) with a specialized hand shake during the Coastal Carolina contest earlier this season.

It started as simply small talk on the practice field one day.

He and senior running back and roommate Elijah Mitchell were discussing perhaps adding a little extra to his next touchdown run.

“We always joked around about stuff like that,” said Vallot, who then followed with a suggestion.

“Hey, let’s do a little hand shake for whenever you score,” Vallot offered.

UL football coach Billy Napier would have preferred a more precise practice from his No. 16-ranked Ragin’ Cajuns on Wednesday.

The duo then “just started making stuff up” to put the plan into action.

“Everybody liked it, so we kept it going. We tried to switch it up each week.”

Unfortunately, the fancy hand shake ritual didn’t make it until the end of the season.

“But as the weeks went by, the refs started to recognize it,” Vallot said, laughing. “So as soon as Elijah would score, they would run to the end zone to make sure we wouldn’t do it .”

In his first statement upon learning the No. 16-ranked Ragin’ Cajuns would be playing UTSA in the First Responder Bowl on Saturday, UL coach B…

By the Arkansas State game on Nov. 7, the officials were blocking the duo’s endeavors.

For an offensive lineman like Vallot, it was fun while it lasted.

“Yes, it’s definitely cool,” he said. “When I was kid in our backyard, I would score a touchdown and I would do a little dance. I was like, ‘Man, I wish I could do this one day on a big stage.’ Now I'm making dreams come true and having a little fun while doing it.”

With neutral officials in Saturday’s SERVEPRO First Responder Bowl in Dallas, perhaps it can make a postseason return.

“It has been a blast rooming and playing with my brother Shane Vallot," Mitchell said. "The hand shakes when I’m in the end zone are amazing. We come up with something different to do every game, so it is gonna be a surprise for the bowl game. We have one more chance this weekend so I need to get in the end zone.”

Either way, Mitchell and Vallot have sure enjoyed their time playing college football together with the Ragin’ Cajuns.

The pair came up playing high school football on the opposite sides of Verot School Road, with Vallot playing 5A ball at Comeaux High and Mitchell a 3A superstar at Erath.

They first met at a postseason all-star game following their senior seasons in a win over Lake Charles.

“That’s when we first met and ever since then, we’ve became brothers,” Vallot said. “Elijah is actually roommate. It’s a been a fun journey with him. Since he came here, we’ve been brother. I’ve been with him all four years. I just redshirted and he didn’t, that’s why he’s a senior.

“It’s a fun four years with him. Man, I’m just so excited to be able to know him and become brothers with him for the rest of my life.”

Mitchell’s impact came first. After an injury ended his freshman season just five games in, Mitchell exploded with 985 yards and 13 touchdowns, as well as 349 yards receiving yards and three more scores as a sophomore in 2018.

The 5-11, 200-pound back enters the First Responder Bowl sixth in school history in yards with 3,140 and fifth in touchdowns with 40.

Foote: Toney's highly touted Cajuns' defense ready to do his talking for him

Upon learning UL’s opponent for Saturday’s 2:30 p.m. First Responder Bowl in Dallas on ABC, the first thought for many around the Ragin’ Cajun…

“It is always a great opportunity to get to play in a bowl game with all of my brothers," Mitchell said. "I love playing at Louisiana and it is something that has been way more than I expected coming into the team.”

While Mitchell came to Lafayette with high hopes to be a star, Vallot was a walk-on who earned a scholarship later down the road. But when center Cole Prudhomme suffered a season-ending knee injury before the 2019 season, Vallot took over the center spot and remains in that role as he finishes out his junior season.

“The impact he’s made on this team is tremendous,” Vallot said of Mitchell. “He really came in his freshman year, true freshman, ready to play. He could have went anywhere else in the country, but he came to UL and was ready to play. He did a lot for us these last four years.

“As a brother and a teammate, I can’t thank him enough. I look forward to see him in the future, doing bright things.”

While Vallot has another year — and perhaps two more with the Cajuns — Mitchell appears headed to the NFL. A huge first step in that direction was getting invited to the Senior Bowl scheduled for Saturday, Jan. 30.

“I’m excited to be able to have him a part of this team and always be with us,” Vallot said. “He’ll always be a Cajun.”

Also, Vallot is counting on the future including some reunion vacations to catch up on their careers down the road.

“And us going on vacation together — going to the Bahamas — and doing all kind of fun stuff like that that we always talked about,” Vallot laughed.

As if the UL Ragin’ Cajuns didn’t have enough of a chip on their shoulders, the All-Sun Belt team — notably light on Cajuns players — was rele…