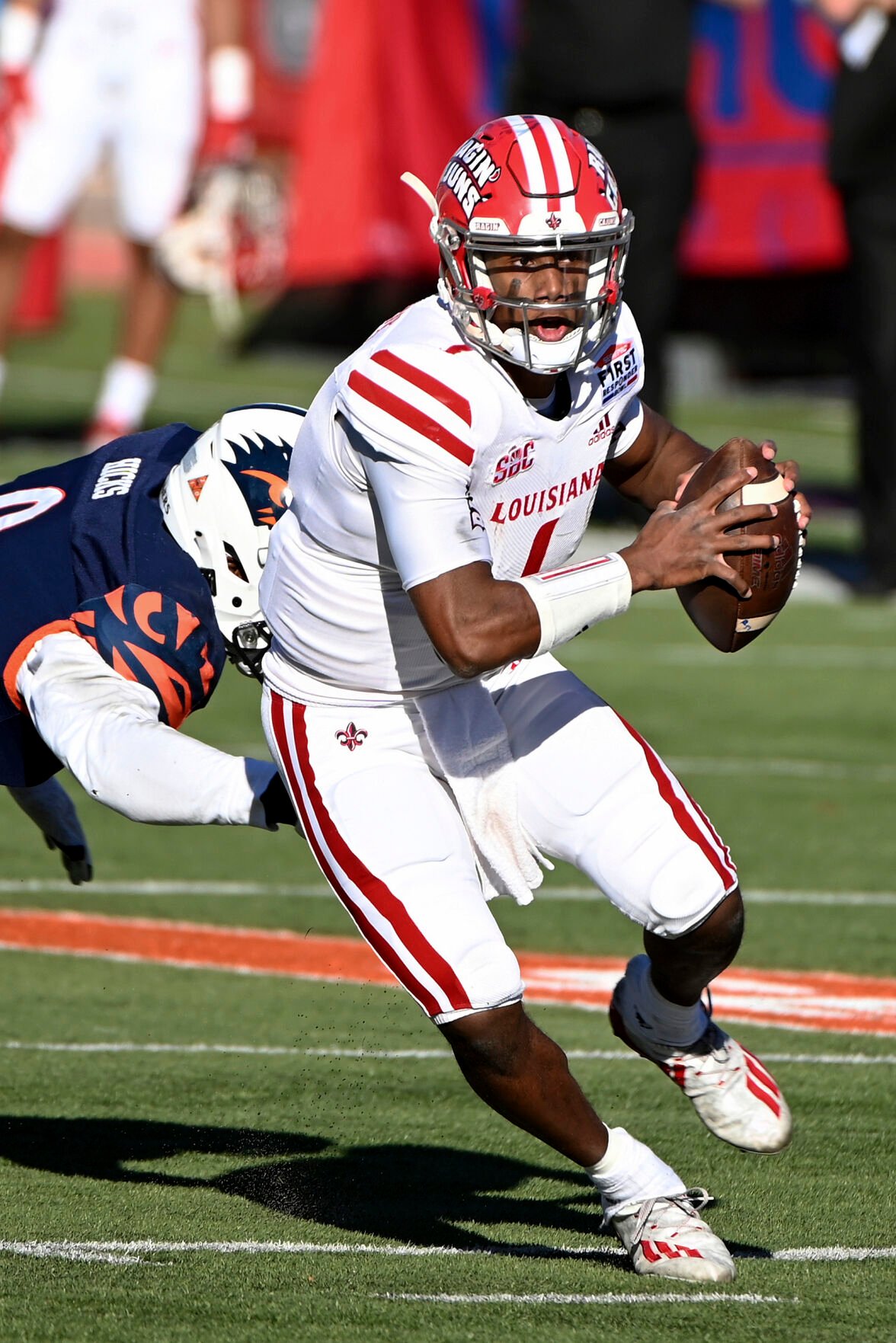 UL quarterback Levi Lewis (1) is one of few returning starting quarterbacks in the Sun Belt Conference entering the upcoming season. 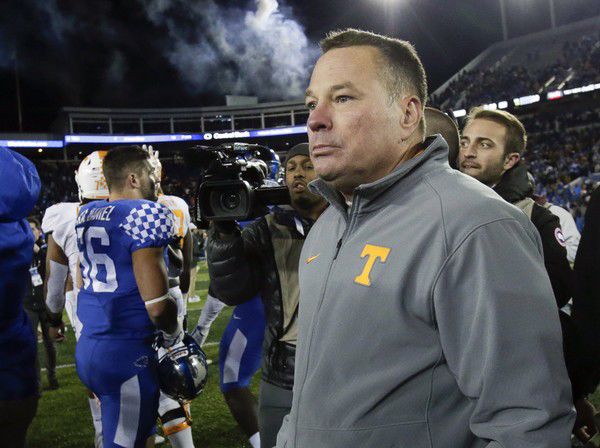 Former Tennessee coach Butch Jones takes over Arkansas State's program as one of the three new head coaches in the Sun Belt this season.

UL quarterback Levi Lewis (1) is one of few returning starting quarterbacks in the Sun Belt Conference entering the upcoming season.

Former Tennessee coach Butch Jones takes over Arkansas State's program as one of the three new head coaches in the Sun Belt this season.

When the Sun Belt Conference football programs meet for the 2021 media days Thursday in New Orleans, there figures to be plenty of smiles to go around.

For one, there will be more eyes focused on the Sun Belt race this season than ever before after the league’s unprecedented national acclaim a year ago with two teams in the top 20 in the final college football playoff poll.

Then there’s the simple fact that everyone’s actually meeting again after media days were canceled across the country last season due to the pandemic. No, COVID-19 concerns remain far from over, no league understands how complicated the coronavirus can be after getting the Sun Belt championship game cancelled last season.

But somehow, that did little to slow down the Sun Belt’s rise toward the top of the Group of Five rankings.

Most certainly, there will be plenty of talk about the new 12-team college football playoff models and all the new NIL opportunities for college athletes across the nation when the Sun Belt’s coaches, players and media converge Thursday at the Sheraton Hotel in the Crescent City.

Beyond those national issues, there will also be five other themes to keep an eye on during this year’s Sun Belt football media day.

There will be three new coaches in the Sun Belt this season, or more specifically, the Sun Belt West Division.

That may not be a good sign for the West to make up ground on the more-dominant East Division. Much of the preseason talk suggests all five East teams would finish second in the West. We shall see as the season plays out.

On paper, new Arkansas State hire Butch Jones – formerly of Central Michael, Cincinnati and Tennessee – figures to have the best chance at disproving that prediction. Prior to last year’s disappointing 4-7, 2-6 season, the Red Wolves had been to nine straight bowl games in nine consecutive winning seasons.

If the new staff can find some quick solutions to defense’s pass defense woes and the offense’s red zone troubles, no one should be surprised if Arkansas State returns to title contention.

All college football fans know ULM’s new coach in Terry Bowden. In fact, most even know Bowden’s new offensive coordinator in former Michigan head coach Rich Rodriguez. While most starting lineups around the league will be filled with returning starters, these new staffs will be introducing a lot of new names to the Sun Belt.

At South Alabama, new coach Kane Wommack – a former fullback at Arkansas – won’t bring quite a name recognition as ULM’s new staff, although his offensive coordinator is Major Applewhite. Wommack isn’t totally new to the Sun Belt, serving as the Jaguars’ defensive coordinator in 2016-17.

While the teams in transition will likely be the overwhelming favorites for postseason Newcomer of the Year honors, most of the contending teams will trot out starting lineups filled with familiar names.

Teams returning 19, 20, even 21 starters this season will be more common than ever in the Sun Belt and across the country.

UL’s Ragin’ Cajuns return 20 starters, including a super senior quarterback in Levi Lewis on pace to rewrite the program’s record books with this extra season. Coastal Carolina took the league by storm last season and it returns 19 starters in hopes of following up on the Chanticleers’ historic breakthrough campaign.

Last season might have been a tiny step backward for Appalachian State, but the league’s most dominant program over the last decade returns 17 starters and are determined to return to the Sun Belt title game.

Georgia Southern has 17 starters back as well, including nine on a defensive unit that led the nation with 26 takeaways last season.

Georgia State returns 22 starters, counting the two special teamers, including all 11 on offense. Troy, looking to return to prominence in the Sun Belt East, also has over 20 returning starters.

If football is all about seasoned quarterback play, most of the Sun Belt could be in trouble this fall. Only UL, Coastal Carolina and Georgia State will be returning full-time starters to that critical position.

Levi Lewis is entering his third season as the starter, while all McCall did as a freshman was transform the Chanticleers from an unknown to a national power in one season. Georgia State’s Cornelius Brown also shown plenty of promise.

Appalachian State will be without Zac Thomas for the first time in three seasons. Duke transfer Chase Brice is expected to take over after a turnover-filled 2020 season, so there’s some questions there.

Shai Werts transferred to Louisville, so Georgia Southern’s run-first offense could go with backup Justin Tomlin with Georgia Tech transfer James Graham possibly in the mix as well. Troy’s in a similar situation with Gunnar Watson more of the incumbent and Missouri transfer Taylor Powell brought in to compete.

That theme carries over the West as well. South Alabama could go with Desmond Trotter, but South Carolina transfer Jake Bentley is as option as well. Layne Hatcher returns at Arkansas State, but Florida State transfer James Blackman is on the scene now.

ULM returned both Colby Suits and Jeremy Hunt, but Arizona transfer Rhett Rodriguez is one of the Warhawks’ two speakers on the media day schedule. Texas State may be the most unsettled with three quarterback options.

Think about it, no one had any idea last July what Coastal Carolina was about to do.

Oh sure, a few predicted the Chanticleers might be a dark horse option to have a winning season and get to a bowl after suffering four losses by a touchdown or less in 2019, but no one foresaw 11-1 and No. 12 in the final CFP poll. No one.

To expect any other team in the country, much less the Sun Belt again, to make that kind of turnaround would be unreasonable, but is there another dark horse in the running?

Arkansas State could easily bounce back after a one-year hiatus from contending. Georgia State continues to climb the ladder, looking for encore the 39-21 bowl win over Western Kentucky with an exciting young quarterback.

If Troy can make big strides on defense and South Alabama on offense, perhaps.

And if Bowden and Rodriguez can really find a way to turn the Warhawks around in one season, they’ll deserve all the recognition coming their way.

Like all new conferences, the Sun Belt talked about its exciting future in football for years and years, most on deaf ears outside its member communities.

The momentum began before 2020, but last fall was a major springboard. National analysts are ranking the Sun Belt as high as second among the Group of Five leagues entering the season.

Last year, the Sun Belt was 3-0 against the Big 12 and 4-1 over the last two seasons. It’s been seven years now since the Sun Belt had a losing record in bowl games, including 4-1 last season and in 2017. Incredibly, the only team that lost a bowl game was Coastal Carolina – 37-34 to Liberty in the Cure Bowl – finished 11-1 and ended the season ranked higher than everyone in the Sun Belt.

It began with UL’s huge road win over Iowa State. This year, the Cajuns hope to turn the same trick at Texas on Sept. 4.

Win or lose, there’s no denying the incredible progress the league has made.

It may sound silly, but a few players and coaches wearing shades Thursday would be more fitting than the league’s cynics ever imagined.

Lafayette Little League all-stars win state, head to region tournament; here's how they did it

For the second straight game, Aiden LeBouef came through in the clutch for the Lafayette Little League all-stars.