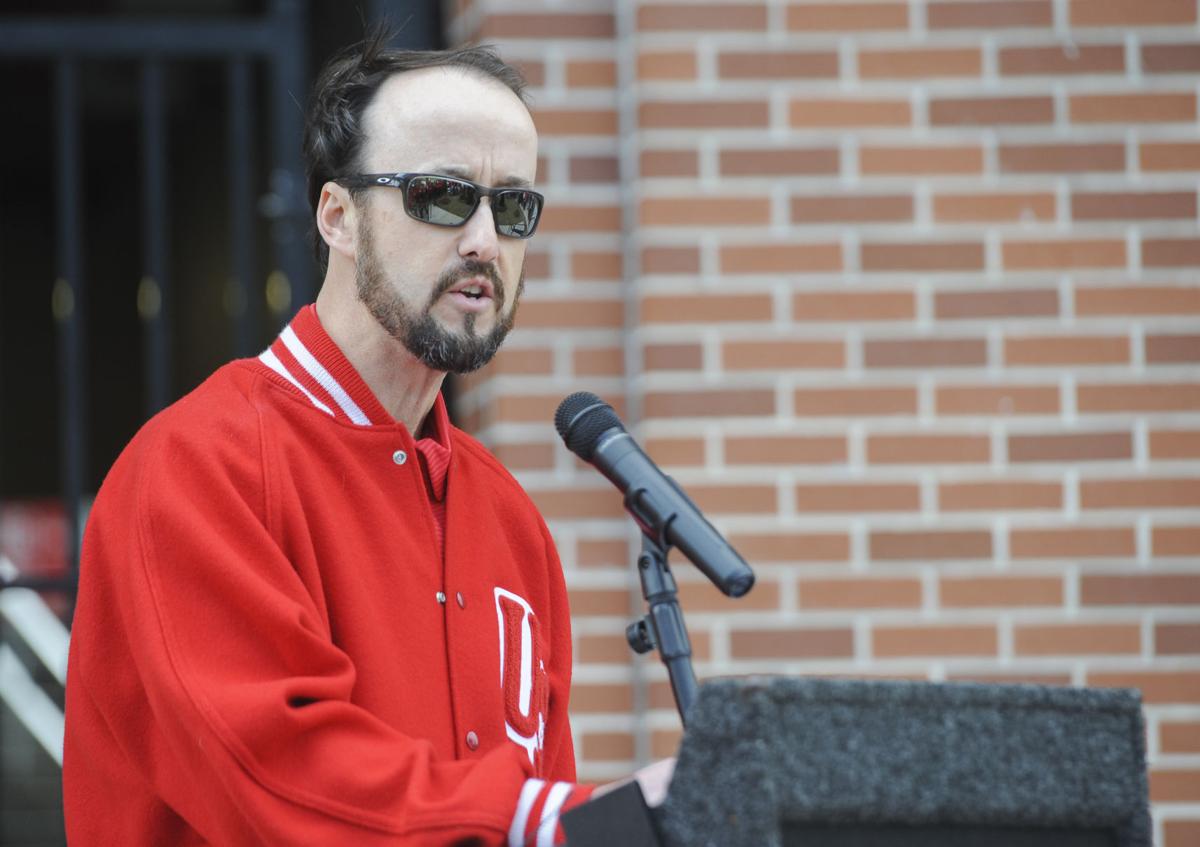 Phil Devey speaks during the unveiling of the Tony Robichaux statue at M.L. Tigue Moore Field at Russo Park on Saturday, February 15, 2020 in Lafayette, LA. 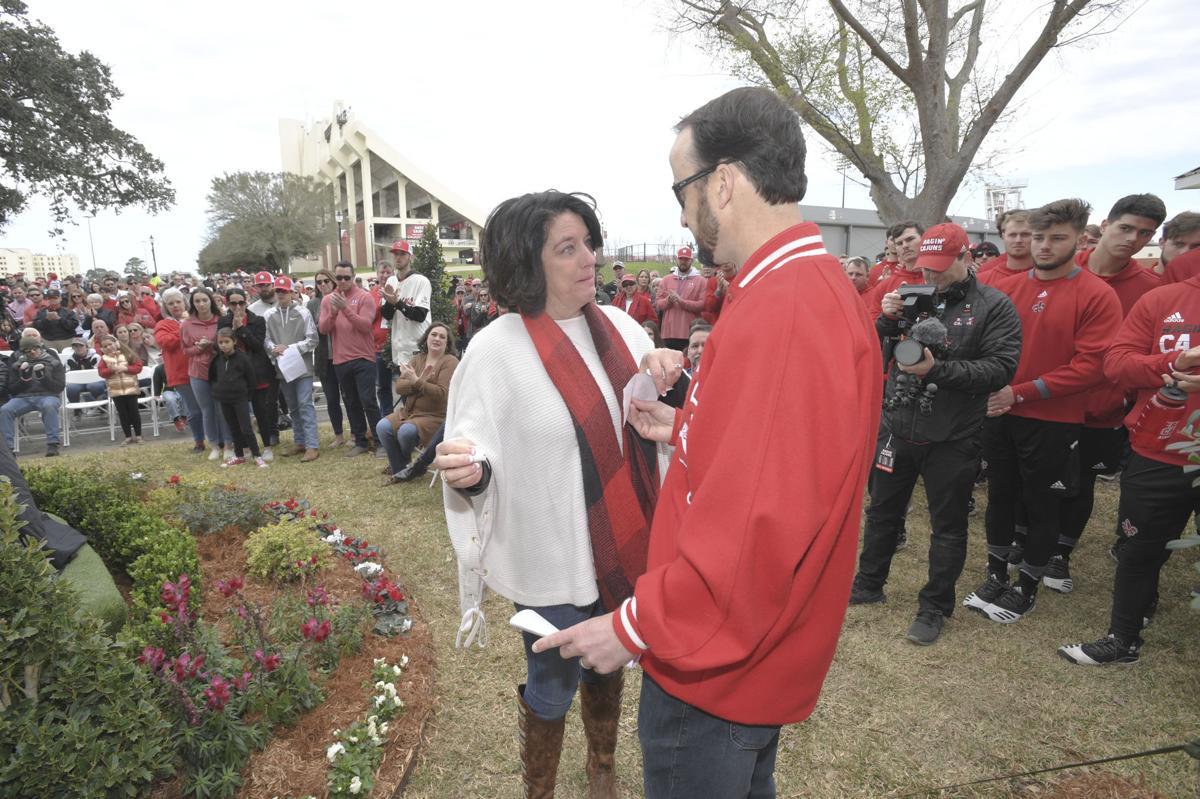 Phil Devey speaks during the unveiling of the Tony Robichaux statue at M.L. Tigue Moore Field at Russo Park on Saturday, February 15, 2020 in Lafayette, LA.

Just like his mentor Tony Robichaux, former UL pitcher Phil Devey didn’t want to be the center of attention.

He wanted less credit than he deserved for everything he did to organize, finance and execute the unveiling ceremony of the larger-than-life monument of his treasured former coach.

Prior to Saturday morning’s unveiling of the Robichaux statue in front of Russo Park, Devey told his coach, ‘Too bad coach.’

On this day, Devey was going to give Robichaux all the recognition due him.

Former Robichaux players honor family with unveiling of statue: 'You will never be alone'

In one of the most impressive gestures to say ‘Thank you’ to a man and his family, the former players of longtime UL baseball coach Tony Robic…

“Coach Robichaux is the definition and the standard of what it means to be a legend,” Devey said.

And Devey is the epitome of a true Robichaux disciple.

His incredible dedication behind the scenes led to Saturday’s truly remarkable achievement.

This 42-year-old business owner, husband and father of three somehow galvanized hundreds of players from coast to coast to fund a $160,000 project with a sculptor from New Jersey in a short amount of time.

Of course, while the normal red-tape circus would never have allowed such a project to be completed by the university by opening weekend, it meant many long, sleepless nights for Devey.

His mother, Lise, who made the trip from Canada for the occasion, revealed that her son was still shaking after she hugged him following his spectacular speech Saturday.

None of us would ever have known his fears inside.

Much like Robichaux, he’s humble and yet incredibly bold when speaking.

Tony Robichaux sculptor to attend unveiling: "I wanted to experience the love at that moment”

He defers recognition but is in the middle of making everything happen.

And then there’s that special touch of dry humor to polish off the entire presentation.

Shortly into his address, Devey didn’t pass up an opportunity to give an historical example to challenge UL’s 2020 baseball team.

The native of Quebec, Canada gave a short history lesson on how the original Acadian people — known as Cajuns — bravely migrated from Nova Scotia to South Louisiana.

He then challenged the players.

“The name ‘Ragin’ Cajun’ was not created to be a cute slogan,” Devey said. “It is who we are when we step across the white lines. It is who we become when we get knocked down. You now have the honor of wearing ‘Cajuns’ across your chest. It’s time to be Cajun.”

To Devey, that means “outside the white lines, you are like coach Robe — compassionate, humble, forgiving, a servant leader. Within the white lines, like coach Robe, you are a warrior, you will stop at nothing to fight for your coaches and fight for your teammates. Not if, but when you get knocked down, you will support each other and rise stronger and more determined and your opponent will now have to face the heartbeat of a true Ragin’ Cajun.

“Be a Ragin’ Cajun on and off the field and you will become part of the legacy of Tony Robichaux.”

When he wasn’t being philosophical, he was displaying creativity and humor.

During various transitions, he referred to the inning within his speech and what Robichaux would have said in that moment during his playing days.

Acting nervous, his talk began with, “Be the hunter not the prey. Alright, let’s do this.”

He cleverly addressed different groups on hand as well.

“To my fellow disciples of Robe, first off, I need to apologize,” Devey said. “For in this moment, the entire Robichaux baseball alumni is being represented by a short, unathletic, funny-looking Canadian. I’m sorry.

Then there was a message to his wife.

“To my wife of 16 years, Heather,” he said. “You like all the other wives in attendance, you get to reap the rewards of marrying a Tony Robichaux-mentored ball player. Congratulations and I love you.”

That drew laughs as he hoped, but then Devey quickly followed it with a statement that would have made Robichaux proud — exactly what the statue was all about.

“To my kids, my wish for you is that one day you come across someone that means as much to you and has a positive impact on your life as coach Robe did for me,” he said.

“I can only hope to teach you the same life lessons he taught me. I just have no earthly idea how I’m going to do that.”

All those in the crowd Saturday who knew everything Devey had done to get to that moment could only marvel at the former left-hander’s drive, determination and delivery.

And like Robichaux, Devey said he learned somewhere along his journey to Saturday’s ceremony that his purpose in joining UL’s program had nothing to do with baseball at all.

In his mind, God brought him to Lafayette more than two decades ago for the incredibly noble project Devey successfully finalized Saturday morning.

In the exact manner his mentor would have appreciated.

It was the same song, second verse for the UL Ragin’ Cajuns' hitting attack in Saturday’s 2-1 loss to Louisiana Tech at Russo Park.