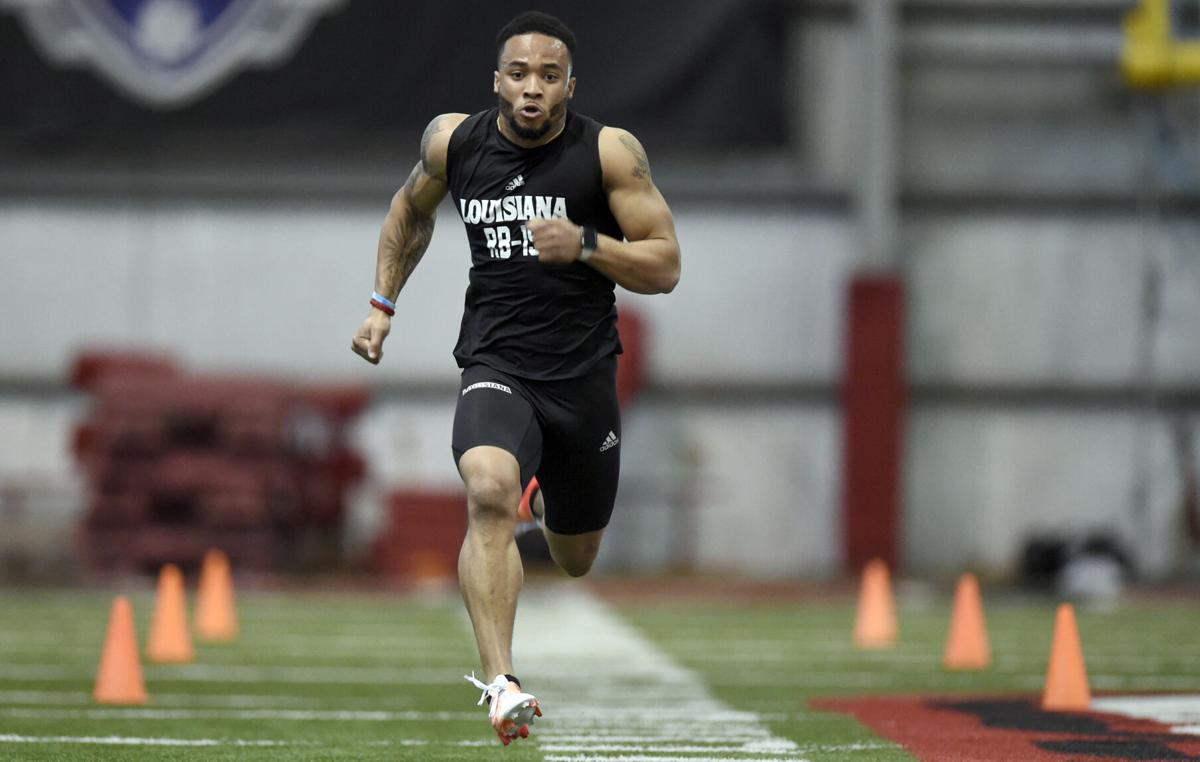 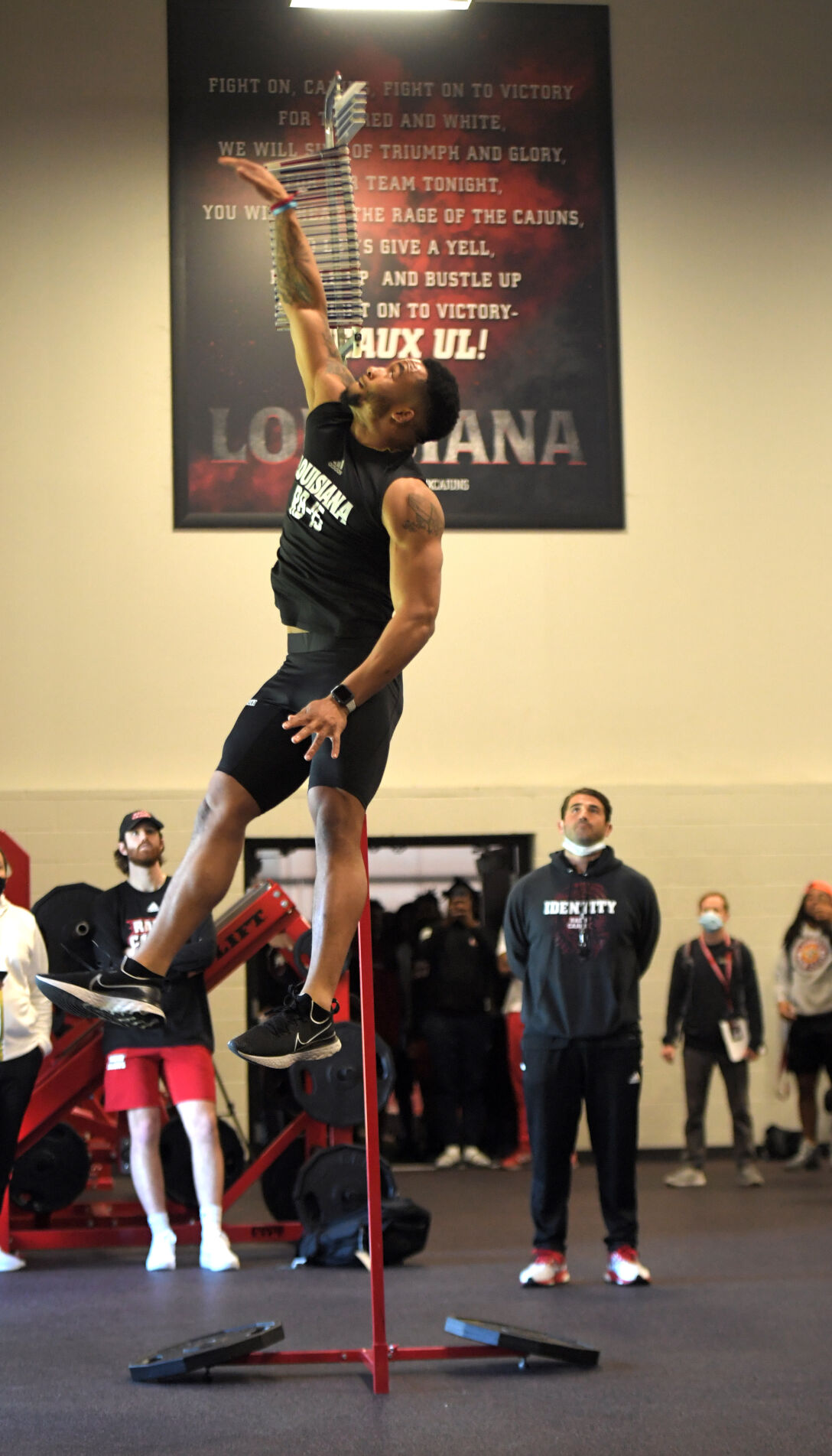 UL former football player Elijah Mitchell jumps a 37 1/2 inch in the vertical jump during go their Pro Day in the Moncla Indoor Practice facility on Monday.

UL former football player Elijah Mitchell jumps a 37 1/2 inch in the vertical jump during go their Pro Day in the Moncla Indoor Practice facility on Monday.

By all accounts, former UL running back Elijah Mitchell made a lot of money at Monday’s UL Pro Day.

With 28 of 32 NFL teams represented at the Moncla Indoor Facility, the former Erath High standout ran a reported 4.38 on the low side and 4.32 on the high side.

“Somewhere in that range,” Mitchell said.

Either way, it was better than any of the running backs in last year’s NFL combine. Remember, UL’s own Raymond Calais ran the third fastest time in Indianapolis last year with a 4.42, just behind Appalachian State’s Darrynton Evans at 4.41 while Wisconsin’s Jonathan Taylor posted the fastest time at 4.39.

Since finishing out his college career with the Cajuns, Mitchell has been training at the Michael Johnson Performance center in McKinney, Tex.

“They prepared me and I was ready to go,” Mitchell said. “I was eating good and it leaned me and dropped me down a bit.”

Mitchell said he was measured at 5-foot-10 and 201 pounds at Monday’s event.

“To go out today and post these types of numbers, which is you look at the NFL combine from the last couple years, these are top three in the entire combine at that position,” UL coach Billy Napier said. “This day and this production would be a national news story if Eli was at the NFL combine today.

“These are elite numbers for this position. Certainly a lot of oohs and aahs in the indoor facility today as he continued to impress.”

“You look at the broad, the vertical, you look at the 40, the three-cone – these are some of the top numbers at the running back position in the last three, four or five years,” Napier said. “Very impressive and does not surprise me one bit. I think we all know how special Eli Mitchell is. He has a bright future.”

During his college career, Mitchell rushed for 3,267 yards and 41 touchdowns on 527 carries, while catch 49 passes for 597 yards and five touchdowns.

Without an NFL combine this year, Mitchell’s numbers will likely echo around the league.

“Not just one NFL team, but every team that was out there was very impressive with what they saw,” added Napier, who said he heard Kenyon Drake most often as the NFL comparison among scouts. “Elite numbers - that’s the only way I can describe it. One of the best pro days in the entire country for a running back in the last five years, I would say.”

Also participating in this year’s UL pro day was backfield teammate Trey Ragas, linebacker Joe Dillon and a group of seniors from the 2019 club that didn’t get the opportunity to compete in last year’s pro day activities due to the coronavirus pandemic.

“I did pretty good,” Ragas said. “I felt good about just about everything. There’s certain things I wish I could have done a little better, but for the most part, I think I had a great day.”

Ragas rushed for 3,572 yards and 38 touchdowns on 596 carries during his career at UL, in addition to 49 receptions for 427 yards and five more scores.

Ragas has been training in Florida.

With the pro day behind him, the New Orleans native is switching his focus back to football with the NFL Draft four weeks away.

“Just getting in football shape,” Ragas said. “No more 40s, no more shuttles, no more verticals. It’s straight football and just getting back in conditioning for camp.

“I’d like to get drafted. That’s for sure. Whatever opportunity I do get, I’m going to take advantage of it.”

Unfortunately, the news wasn’t as good on all former UL players. Linebacker Joe Dillon suffered an injury to halt some of his drills in front of pro scouts.

“Joe did a really good job early,” Napier said. “Joe injured his hamstring today and our thoughts and prayers are with him. It was a very tough experience as you guys can imagine and one that Joe will overcome with no question. His body of works speaks for itself.

“I think the big thing there is we’ve got to get Joe healthy and when he does get his opportunity, he needs to prepare for that.”

Coming off a historic 10-1 season that ended with a No. 15 ranking in the Associated Press poll, the top priority for UL’s coaching staff is c…