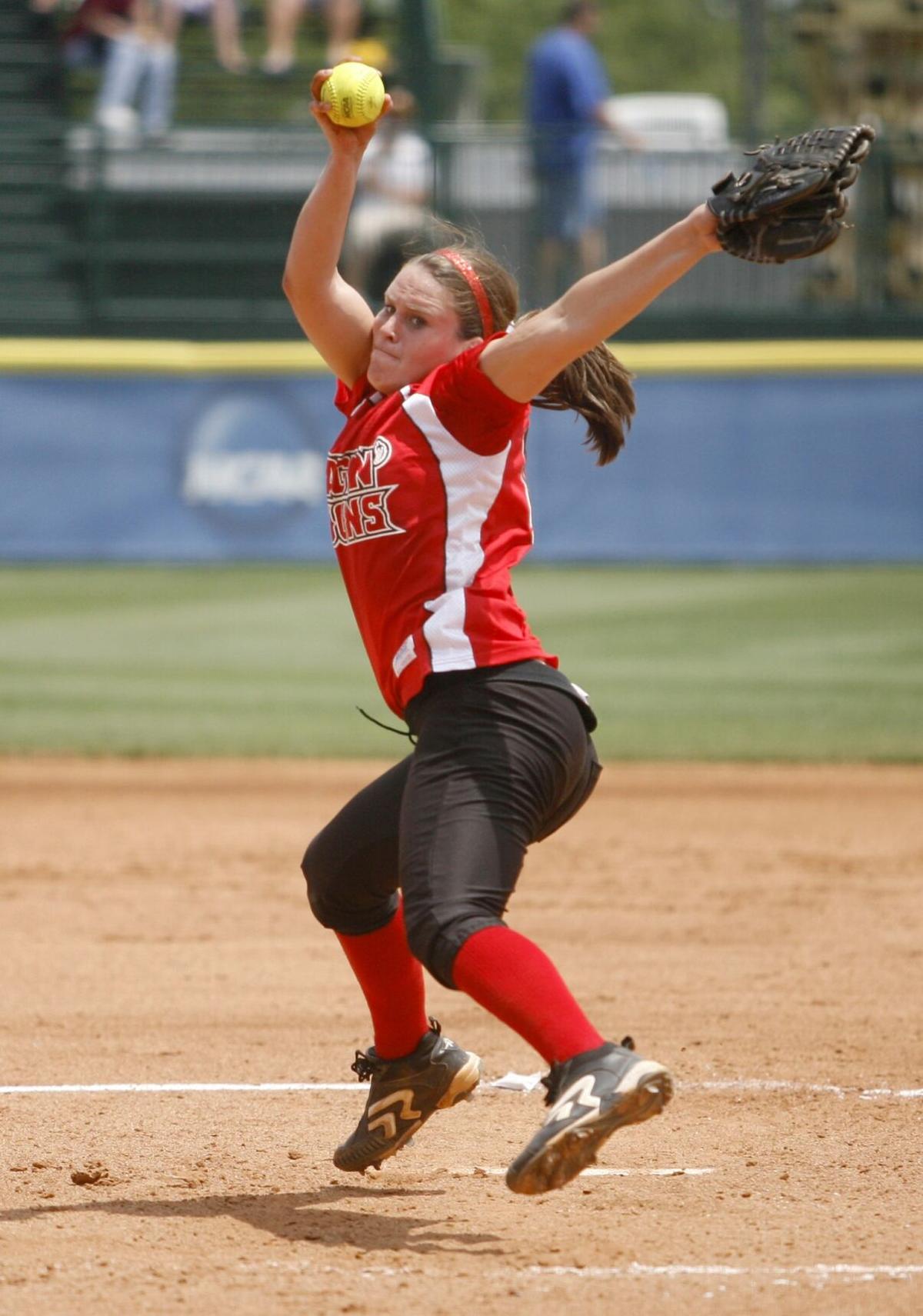 Ashley Brignac, shown here pitching at the Women's College World Series as a freshman with the Ragin' Cajuns, will enter the UL Athletic Hall of Fame on Friday. 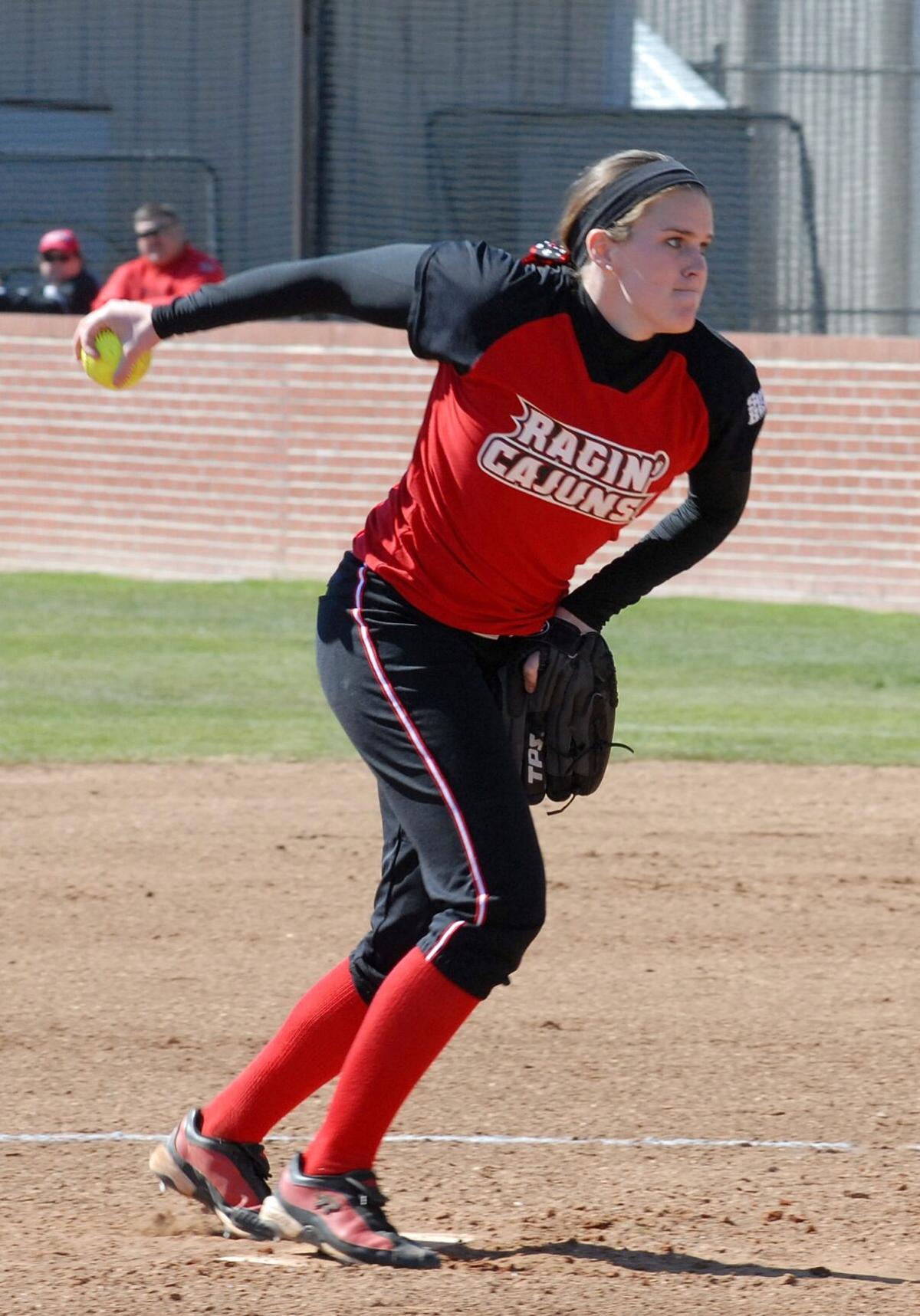 New Orleans native Ashley Brignac said he was important for her to compete for a Louisiana school, making it fitting that she'll enter the UL Athletic Hall of Fame on Friday. 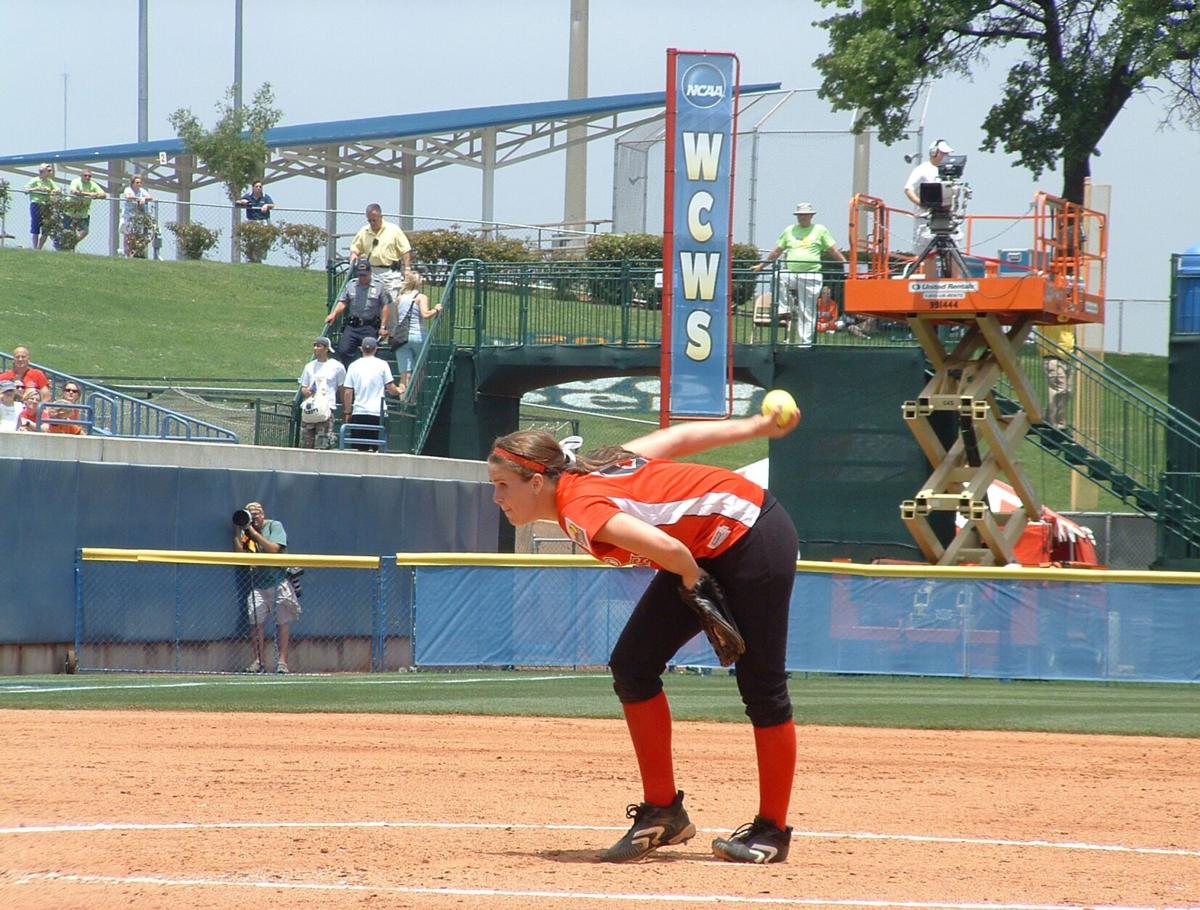 Ashley Brignac prepares to throw a pitch during the Women's College World Series as a freshman for the UL Ragin' Cajuns during their upset of No. 1 Florida. 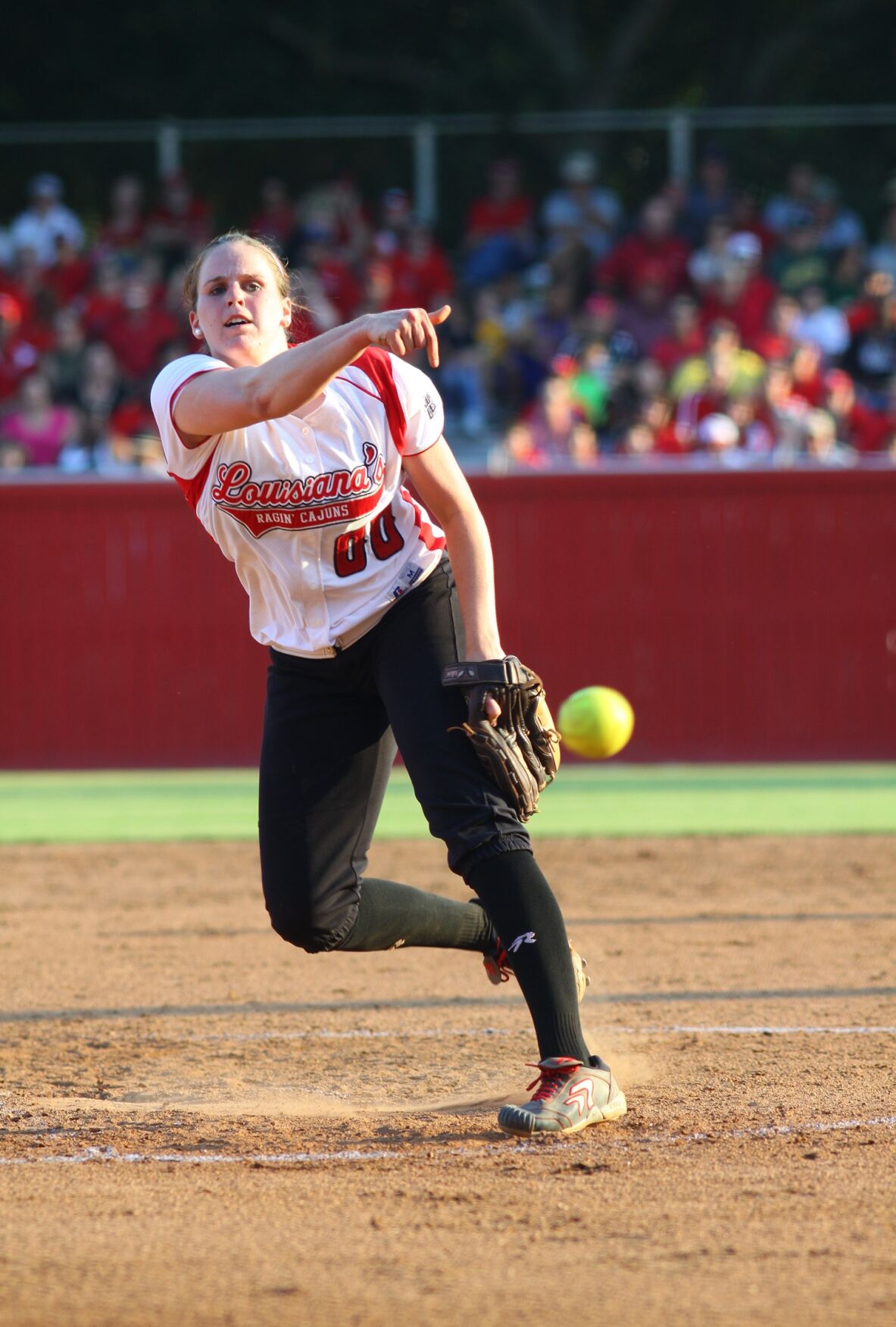 Ashley Brignac, shown here pitching at the Women's College World Series as a freshman with the Ragin' Cajuns, will enter the UL Athletic Hall of Fame on Friday.

New Orleans native Ashley Brignac said he was important for her to compete for a Louisiana school, making it fitting that she'll enter the UL Athletic Hall of Fame on Friday.

Ashley Brignac prepares to throw a pitch during the Women's College World Series as a freshman for the UL Ragin' Cajuns during their upset of No. 1 Florida.

Growing up in Louisiana, there was something that never really made sense to aspiring pitching prospect Ashley Brignac from River Ridge.

She watched as elite athletes moved from across the country to play for powerhouse college programs.

That thought never really left her.

When Brignac  was ranked the No. 1 softball pitching prospect in the nation out of John Curtis High, the decision was easy.

“I’m a Louisiana girl,” Brignac  explained. “I’ve always wanted to represent my state. I never understood as a young girl seeing people representing other universities, but they’re from this other place.

A bad kickoff, a fumble, the death of a friend. And still this Cajun had the game of his life

UL junior running back Chris Smith could easily have felt like the world was crumbling down on him.

“I was like, ‘I want to be that girl from small-town Louisiana helping a Louisiana school on a higher level.’ It’s something I always wanted.”

So despite coming oh-so-close to committing to Tennessee, one day Brignac showed up at a UL practice facility unannounced to deliver the big news.

The No. 1 prospect in the nation was coming to Lafayette.

On Friday, that Louisiana girl will fittingly enter her rightful place into the Louisiana Athletic Hall of Fame during an induction ceremony in Lafayette.

“Being on the Junior USA team, I was one of three girls that was not California or Arizona,” I just didn’t want to contribute to that standard of just California and Arizona people. I didn’t want to move away too far. I felt like it was more my identity than where I was playing.”

For this former walk-on from Comeaux High, Cajuns success is about more than football

Then UL softball coach Michael Lotief and his wife Stefni were counting on that loyalty.

“I had never followed a player across the country before,” Lotief said. “I watched so many of her games while recruiting her that I felt like I was part of their (summer ball) coaching staff.

“Ashley used to tell me she liked seeing me in the stands. I told her, ‘Sister, don’t worry, I’m going to be there watching you.'"

That strong bond built over time between Brignac and the Lotiefs made all the difference in the end.

“They’re just family,” Brignac said. “I remember after one of my visits to Tennessee, I thought I was going to there. It actually made me emotional. I just felt like there was no way I could say no to the Lotiefs. Deep down, I always knew I wanted to play for Louisiana.

“I was like, ‘Am I really going to say no to that?’ After my visit to UL, it was like, ‘This just feels right. This is home.’ You know when you know.”

Everything seemed to be heading in the right direction.

So when she surprisingly interrupted that 2007 practice with the great news of her commitment to UL, Lotief and all involved with UL’s program was ecstatic.

“I just yelled, ‘Alright,’” Lotief remembered. “It was such a big deal to keep a player of her caliber with national notoriety in the state at our program.

“Remember, at the time, we were trying to establish that our program would still be relevant for the long haul … that we had staying power.”

Brignac wasted no time showing what all the fuss was about, combining forces with Teurlings Catholic product Donna Bourgeois to help bring UL to the Women’s College World Series as a true freshman in 2008. The Cajuns knocked off No. 1 Florida in the first game in Oklahoma City.

“We were good,” Brignac  said. “It was really cool that a lot of people didn’t expect that. It was a knowing across our team. We know we got this. We’re the hidden giant that you don’t know.

“When I think back to my college experience and my college days, it’s that year. That year was my favorite year … the team, just everything about that year was pretty surreal. It was such a good memory.”

Unfortunately, not all the memories were as pleasant. Brignac suffered a shoulder injury her sophomore season and was never totally the same again.

She tried everything she could to fight through it. In that 2009 season, she pitched in 14 games late in the season to help the Cajuns advance in postseason play instead of redshirting. She was 8-3 with a 0.44 ERA.

Finally, she relented and had major shoulder surgery.

“It was a day that I was just trying to do something simple and it was to the point where my arm was going numb,” Brignac  remembered. “I told myself, ‘I have to make this decision.’ What was hard was when I made that decision, I also had to call the USA organization and say, ‘Hey this is happening,’ because there were talks about me continuing to playing some of the things they were doing.

“It was a lot of steps, but I knew in my heart it was a 100% right decision. I had tried everything I could prior to that.”

She missed the entire 2010 season.

That doesn’t mean she left the team, though. In fact, it was in those days that Lotief really saw the character inside the pitcher.

UL coach Billy Napier didn’t seem to be in a bad mood.

“She was still 100% committed to the team and the people around her, even though she was going through this really, really rough rehab,” Lotief said. “You don’t often see that from high-level athletes in that situation very often. She never got selfish. She still traveled with us. She was still consumed with the team and wanting to be there for her teammates. She was just a phenomenal person with phenomenal character.”

“This is my new shoulder, this is how I pitch now,” Brignac  said. “I’ve got to figure out how to, but I knew it wasn’t the same. I had to tell my brain, ‘It’s OK.’ You might not have the speed you had 100% of the time, but you can get it back. Now let’s focus a little bit more on this pitch.

“Let’s focus a little bit here. That’s something coach Mike and Stef really helped me with. Maybe I’m not that type of pitcher anymore. Maybe I have to transition into a different pitcher.”

Lotief added, “The relationship between Stef and Ashley just can’t be understated.”

After finishing out here collegiate career, Brignac married “a UL boy” named Blake Domec. Now Ashely Brignac Domec, she moved to chiropractic school in Kansas City and currently runs her own practice back home in River Ridge … with zero regrets about her college career.

“I never let myself go there, because it was all the way it was supposed to be.”

When her list of credentials are mentioned in Friday’s ceremony, it’s going to include such things as ranking top five in games pitched, games started, wins, shutouts and strikeouts.

But to Brignac Domec, being inducted into UL’s Hall of Fame will also be about much more than the numbers.

“It’s that perfect bow on it,” She said. “You go through different seasons of your life. I had my athletic season and then my academic season. Getting to share this with people that were actually there — that helped me start it — and then people who have been in my life since then, getting to share it with my kids and my family.

“A lot of them didn’t even know me in that time frame, so getting to put this bow on it. … A lot of people who have come into my life had never heard about it or maybe seen a few things, but they didn’t know that part of my life.”