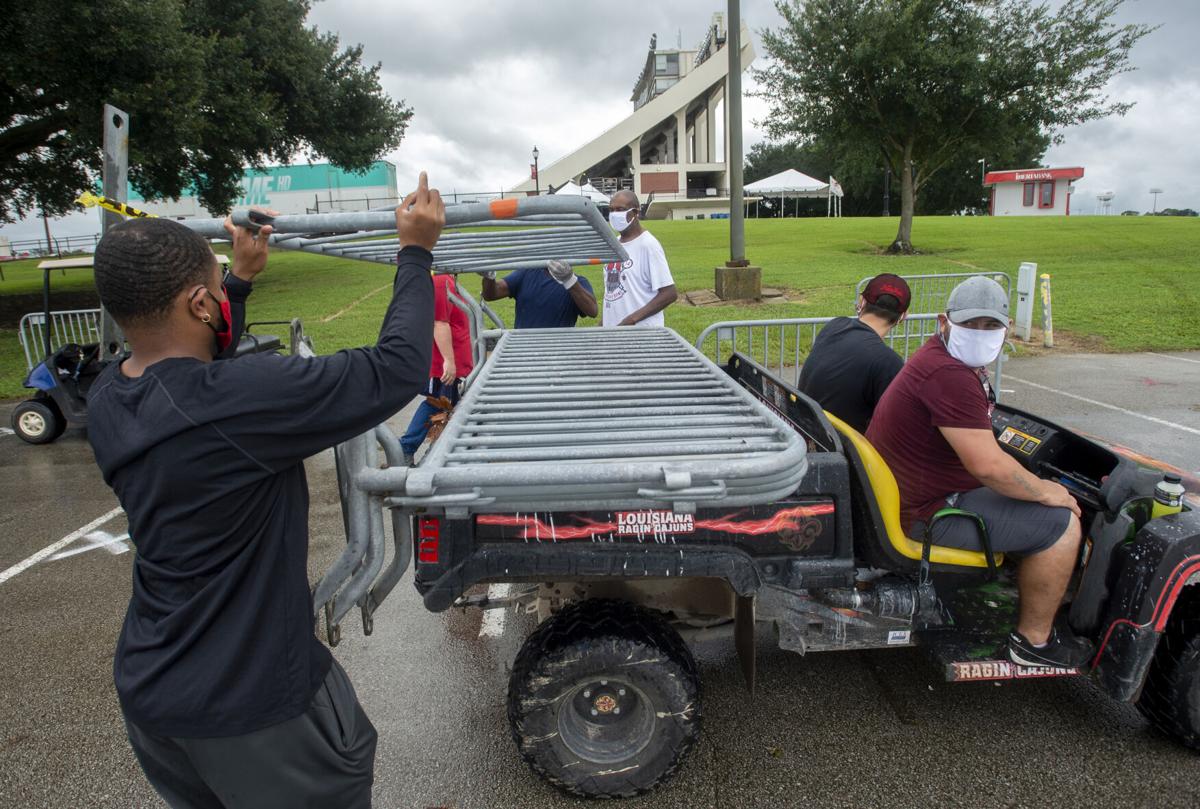 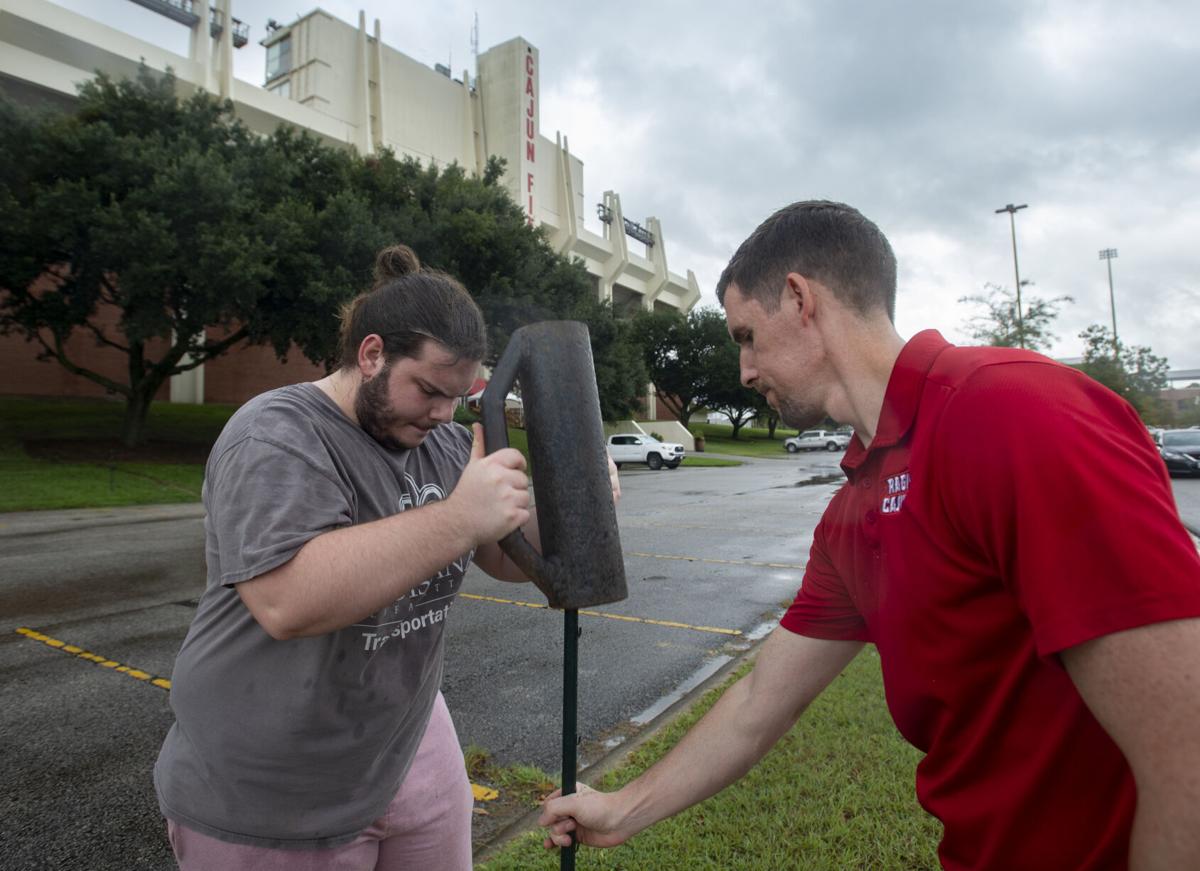 Torey Smith, left, and Fred Credeur drive posts to mark parking spots for members of the Ragin' Cajun Athletic Foundation on Wednesday, September 23, 2020, at Cajun Field in Lafayette. The Cajuns host Georgia Southern this Saturday in their season home opener. 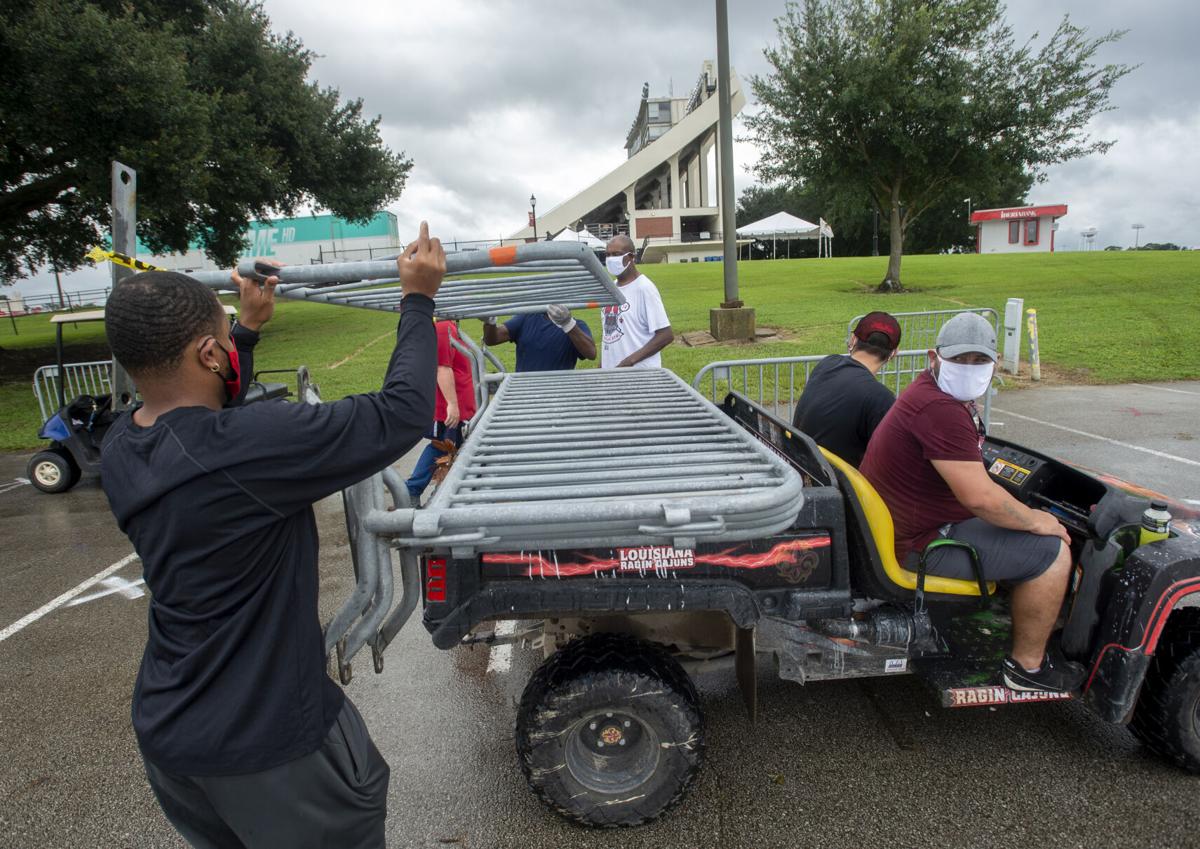 Workers load up barricades on Wednesday, September 23, 2020, at Cajun Field in Lafayette. The Cajuns host Georgia Southern this Saturday in their season home opener.

Torey Smith, left, and Fred Credeur drive posts to mark parking spots for members of the Ragin' Cajun Athletic Foundation on Wednesday, September 23, 2020, at Cajun Field in Lafayette. The Cajuns host Georgia Southern this Saturday in their season home opener.

Workers load up barricades on Wednesday, September 23, 2020, at Cajun Field in Lafayette. The Cajuns host Georgia Southern this Saturday in their season home opener.

The first home game for the No. 19-ranked UL Ragin’ Cajuns football team is an 11 a.m. ESPN2 contest Saturday at Cajun Field against Georgia Southern.

It’s 2020, so all fans should expect it to be unlike any Cajun Field home game they’ve ever attended prior to this fall.

The UL athletic department announced the game day restrictions for Cajun Field last Wednesday. Since then, there have been several misunderstandings about those guidelines.

For example, the standard of 25 percent capacity is not what it seems on the surface. The official capacity of Cajun Field is 41,426. However,  assuming that 10,356 fans could then be allowed into the stadium is not accurate.

“That capacity may be at 25 percent for bars, restaurants and other entertainment elements,” said Nico Yantko, UL’s deputy director of athletics for external operations. “However that capacity doesn’t translate to a manifest (stadium seating). What dictates our capacity is the social distancing measures that we have to put in place before our manifest and that is how we get the outcome of seating.”

While the exact number of fans to be allowed in Saturday’s home opener wasn’t available Wednesday afternoon, it’ll be “nearly 5,000” fans, a number that is limited by the six-foot radius around every seating pod.

For this first home game, those seats will be filled by season ticket holders. No single-game tickets are available for Saturday’s game.

Yantko said it’s possible single-game general admission seats could be available for future games, depending on how many unused player pass tickets for visiting teams are utilized.

On Wednesday, the athletic department got permission to use the stadium's hill for additional seating when it initially was told the hill wasn’t available.

The new socially distanced seating on the hill will be for general admission season ticket holders.

Seats were given to season ticket holders based on their donor and investor ranking within the RCAF structure.

No tailgating will be allowed in the Cajun Field parking lot Saturday. The parking lot will be opened two hours before game time and so will the gates at Cajun Field to encourage all fans to enter the stadium upon arrival.

Fans with tickets won’t be asked to leave if in the parking lot during pregame, but “there won’t be anything for them to do,” and they won’t be allowed to gather.

The game day trolleys will be operational Saturday and can be boarded at Rock’N Bowl downtown, Legends on Bertrand and at The Corner Bar on Johnston Street.

“It’s unusual circumstances,” Yantko said. “This calls for us to be very creative and innovative in how we can create a wonderful game day experience for fans. Keep in mind, we’re excited that we’re still going to get a chance to play football. We’re a top 20 team at No. 19 in the country and the fact that we get to have fans at games is a tremendous opportunity for us.

“Remember, these things are temporary.”

General admission parking spots will be available for $15 on the gravel area inside the fence at Cajun Field, while reserved parking will be on the concrete.

The traditional ‘Cajun Walk’ prior to the game will be virtual on the Ragin’ Cajun athletic department’s Facebook page.

UL coach Billy Napier warned how unstable the depth chart would be from week to week during this season.