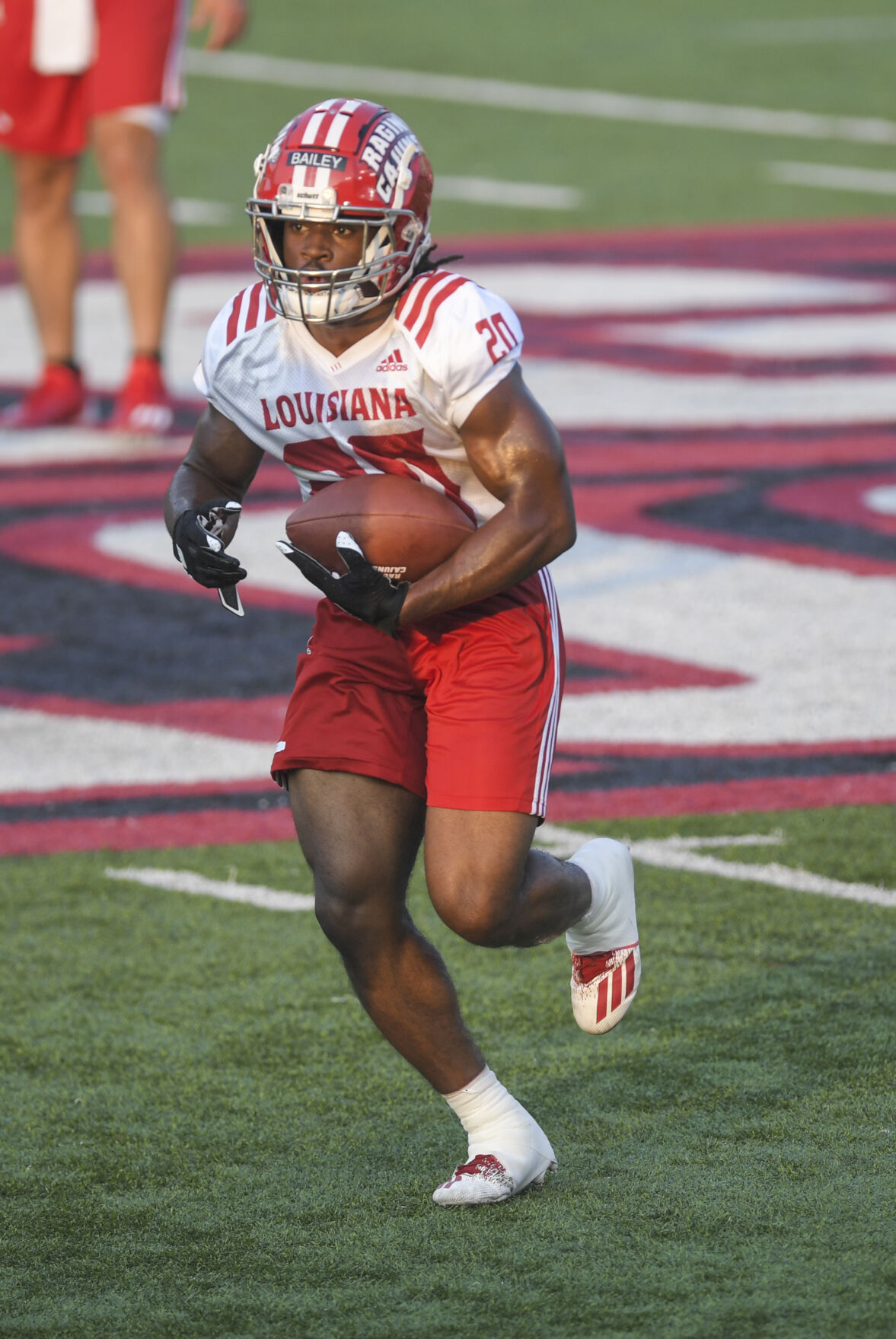 UL freshman running back Emani Bailey figures to play a big part in the Cajuns' plan to replace Elijah Mitchell and Trey Ragas. 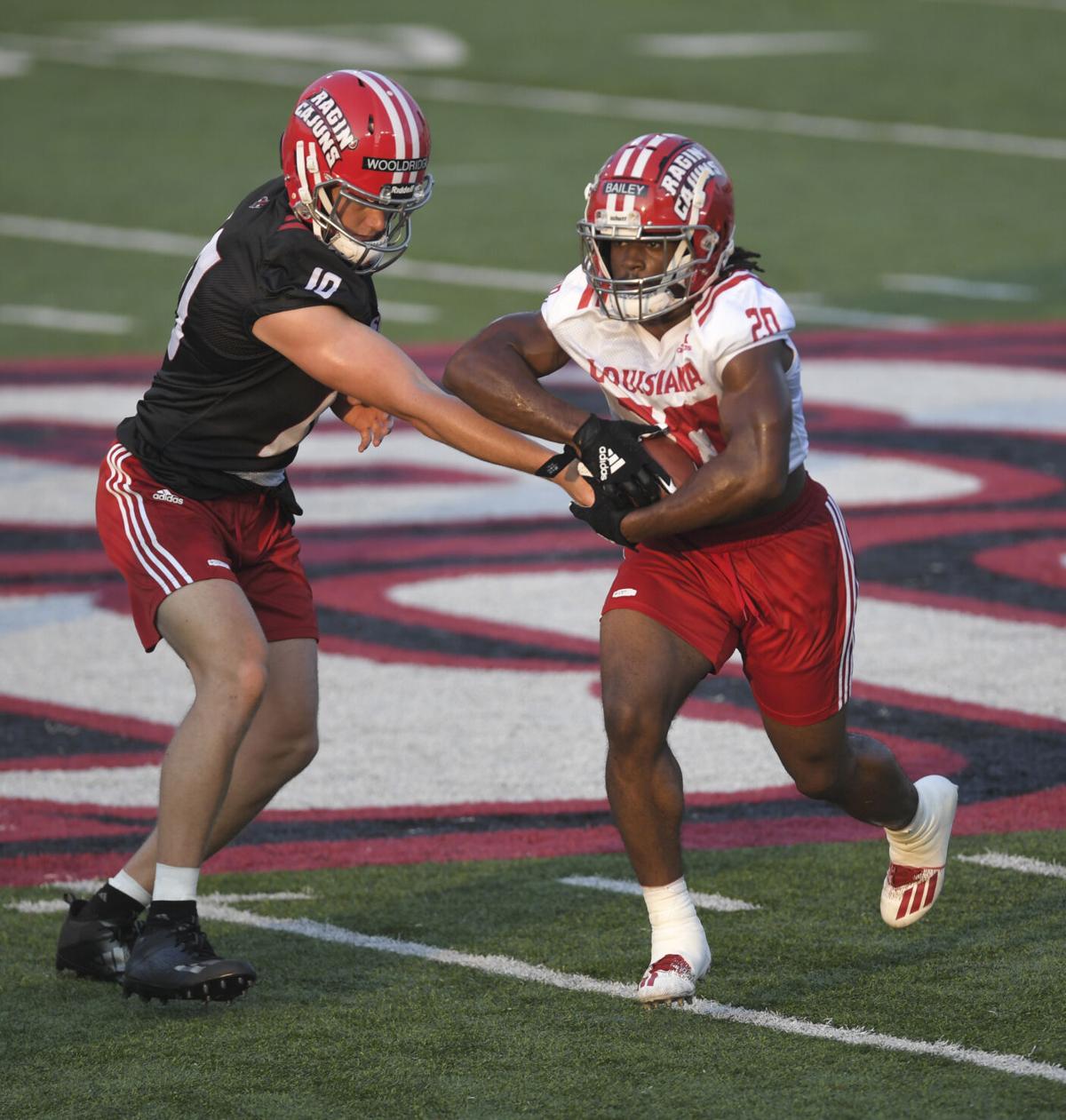 UL freshman running back Emani Bailey (20), shown here getting a hand off from quarterback Ben Wooldridge (10) during a fall practice session, is confident he's ready for a heavy workload this fall.

UL freshman running back Emani Bailey figures to play a big part in the Cajuns' plan to replace Elijah Mitchell and Trey Ragas.

UL freshman running back Emani Bailey (20), shown here getting a hand off from quarterback Ben Wooldridge (10) during a fall practice session, is confident he's ready for a heavy workload this fall.

At first glance, trying to replace Elijah Mitchell or Trey Ragas in the Ragin’ Cajuns’ backfield would be a big ask for a player that young.

But truthfully, this isn’t Bailey’s first Division I college rodeo.

A year ago, UL cornerback Mekhi Garner was a hidden gem.

While he only received 10 carries for 60 yards in his first season with the Cajuns, the former Ryan High back from Denton, Texas, learned valuable lessons that should serve him well this fall.

“It definitely was a good push that I needed,” Bailey said of last season. “Now I know how the speed of the game works. I know how to read defenses and how they talk .. what to expect. Had enough pre-snap reads and basically figuring out how strong and how fast the game is on this level.”

The other growing pain Bailey got out of the way last season was learning the play book. That was something the 5-foot-8, 201-pounder said took until Week 8 to fully grasp last fall.

“The play book is rule number one,” Bailey said. “If you don’t know the plays, you’re most likely not going to be able to get on the field. After I started learning the play book more, I could go out there and perform and do what I do best.”

For UL fans who haven’t seen Bailey run yet, his skill set is based on “speed, power and agility … knowing the situation of the field — down and distance.”

Sometimes it’s just fun to do something different.

“Sitting back and watching Trey and Eli and watching how they practiced every day, how they studied film and studying plays,” Bailey said. “Two good teachers.”

UL coach Billy Napier has certainly been impressed with Bailey’s attention to detail.

“I’ve been very pleased with Emani,” Napier said. “One thing about Emani is that he’s extremely competitive. It’s very important to him to do it exactly right. He’s tough, he’s got elite speed — documented track speed — and certainly packs a punch for being a little shorter in stature.

“The big thing is he’s handled every opportunity he’s been given and shown to be very productive.”

UL redshirt junior linebacker Lorenzo McCaskill insists he's totally focused on the present as a returning starter on a No. 23-ranked Ragin’ C…

Consequently, Bailey isn’t intimidated by the huge shoes he and his colleagues like Chris Smith have to fill at running back.

“I am very much more prepared this year,” Bailey said. “The game has slowed down after working with all the coaches and (quarterback) Levi (Lewis) and Chris to me to get ready for what’s about to happen. Stepping into a bigger role, I’m much more prepared for this season.

“It’s going well. We’re working hard. We’re going 110 miles an hour every day and continue to watch film and improving every day. Just playing hard and being as one as possible.”

The backfield knows there are doubters and that only fuels them.

“We love hearing it,” Bailey said. “The doubt they bring on us, it only makes us more stronger and powerful. We’re just going to let our game do the talking.”

Foote: On paper, UL's defense doesn't seem to be lacking much heading into 2021 season

It’s not something any coach would ever publicly admit to or detail even if he believed it.

Offensive tackle Max Mitchell has been productive since day one, but now emerging as a team leader for Cajuns

In some ways, UL junior offensive tackle Max Mitchell came out of nowhere to become a team leader for the No. 23-ranked Ragin’ Cajuns.