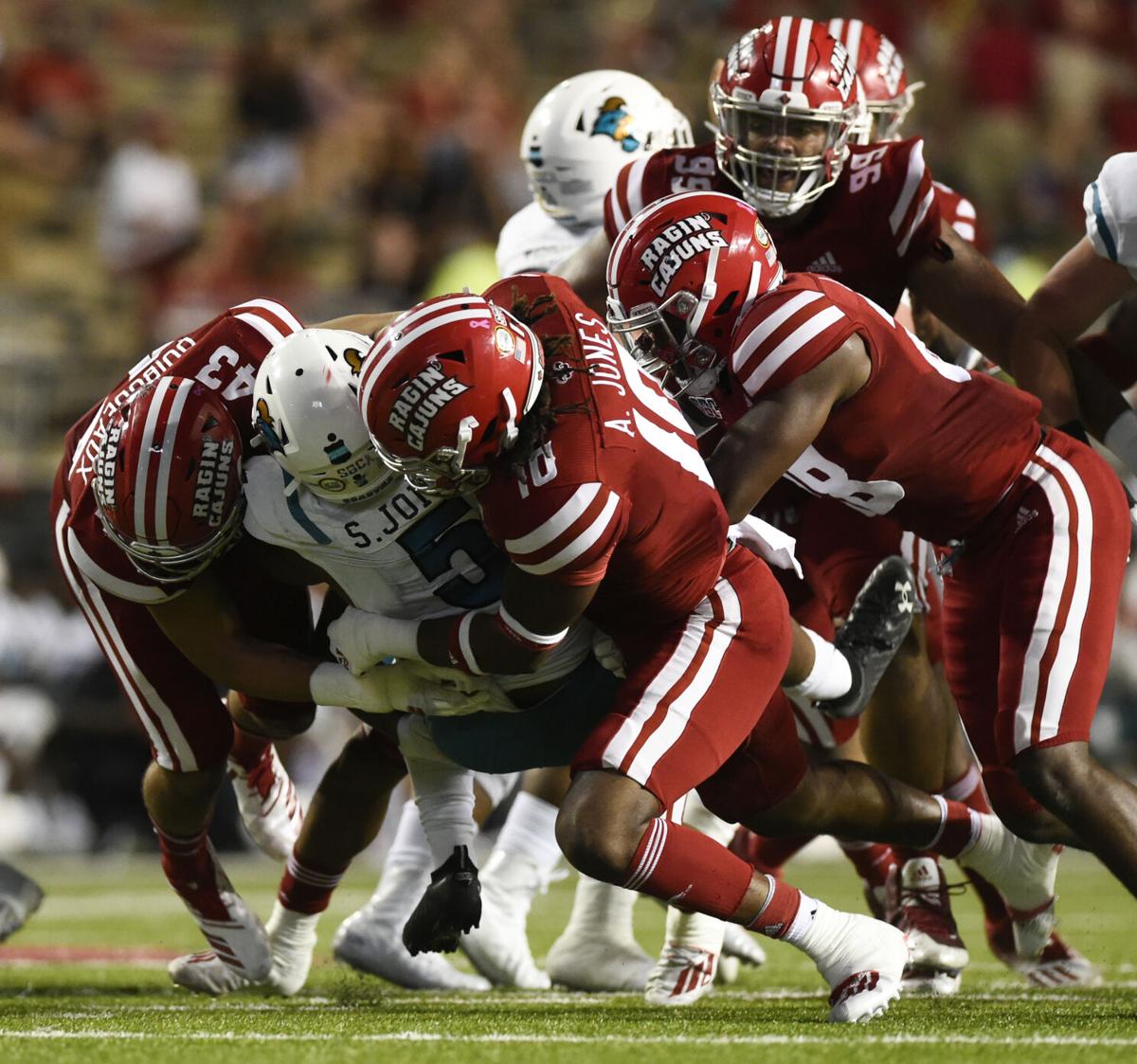 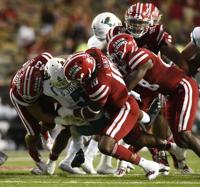 Coastal Carolina running back Shermari Jones (5) is tackled by the UL defense during their Sun Belt Conference football game at Cajun Field on Wednesday, October 14, 2020 in Lafayette, LA. 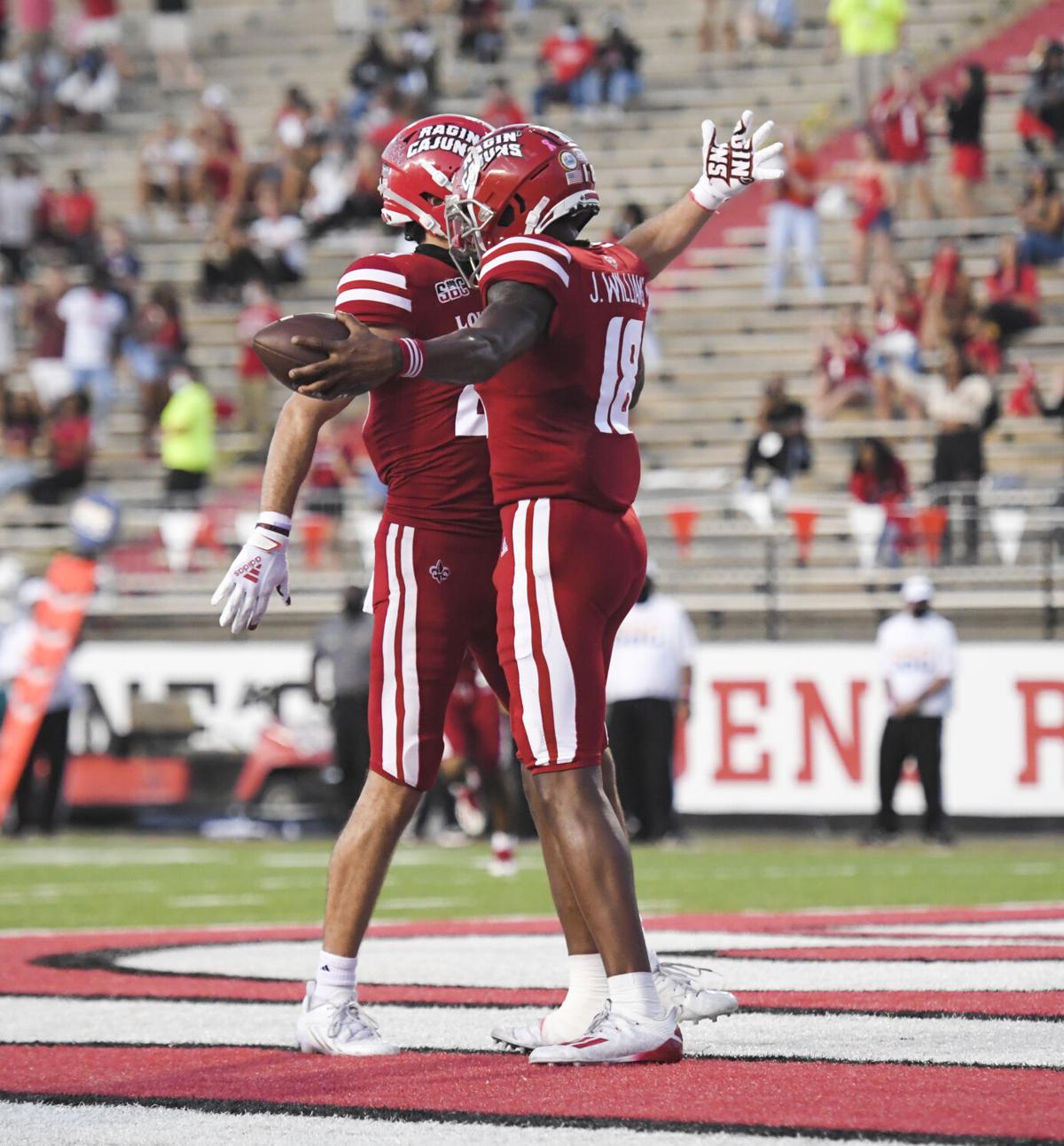 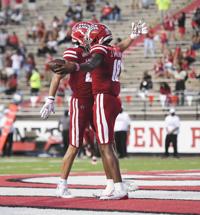 Coastal Carolina running back Shermari Jones (5) is tackled by the UL defense during their Sun Belt Conference football game at Cajun Field on Wednesday, October 14, 2020 in Lafayette, LA.

It’s a stretch that will likely haunt the No. 21-ranked UL Ragin’ Cajuns for quite some time.

If not, it’ll definitely make reviewing the film of Wednesday’s 30-27 heartbreaking loss to Coastal Carolina at Cajun Field difficult to watch at times.

The Cajuns had just gotten a break in the physical back-and-forth battle of Sun Belt Conference unbeatens. Perhaps it would create the path to pulling off another hard-fought win for UL to get to 4-0 for the first time since 1988.

With the game tied at 27, the Cajuns were forced to punt from their own 28-yard line with 6:51 left to play.

Incredibly, the Chanticleers were flagged 5 yards for having two players wearing jersey No. 6 on the punt play. It was fourth-and-5, so Coastal’s oversight produced a gift first down.

The only problem is UL quickly returned the favor. At third-and-short from the UL 42, the Cajuns jumped early for a false start to complicate the process.

“That was all on us,” senior guard Ken Marks said. “It was a communication issue. The center was trying to make a call and we were trying to run. That all comes into play. We have to come together as one, but that was on us.”

That didn’t end the frustration. The third-and-6 call of a screen pass to Elijah Mitchell fell incomplete, but it was oh-so-close to being a huge gainer for the Cajuns.

“Yeah, we were close to a big one there,” UL coach Billy Napier said. “They brought a cross-dog, and the end was the contain rusher up the field. He really created a tough angle for the quarterback there. We were close, you know. We almost kind of negotiated that arm angle and get it around. Man, we had them in the right call too.”

Coaches often talk about it being a game of inches and the importance of execution. That third-down play was indeed a classic example.

“I think that’s one where we’re going to look at the tape tomorrow and say, ‘Hey, if we’re six or eight inches a little better here, not only do we get the first, but we’ve got an opportunity for a big play,’ ” Napier added. “That’s where we’ve got to improve. We’ve got to improve our execution. That’s going to be one of the plays that we’re going to look back and say could have made a difference in the game.”

Rhys Byrns’ punt traveled 46 yards to the Coastal 16 with 5:30 left, but those conditions actually played right into the Chanticleers’ wheelhouse.

Coastal isn’t about striking quickly. The Chanticleers yearn for long, time-consuming drives to wear down the opposing defense.

When they reeled off a 16-play, 75-yard drive that ate up 8:02 of the clock to open the second half, it was actually their third-longest drive in the last two games. Coastal had drives of 17 and 18 plays in the 52-23 win over Arkansas State.

So essentially, UL’s fans and sideline were reduced to watching helplessly as the Chanticleers marched it 61 yards on 11 plays in 5:26 to set up Massimo Biscardi’s 40-yard, game-winning field goal with four seconds left on the clock.

“It’s really frustrating, because we had the opportunity to be in that same position,” Marks said. “We shot ourselves in the foot. Sitting there watching and hoping that he missed it — he made it, good kick — but that’s on us. We have to control the ball better.”

The big differences were Coastal’s slower style produced a huge time of possession edge of 38:11 to 21:49, and the Chanticleers was 9-of 15 on third down conversions. The Cajuns only converted 4 of 9 chances on third down.

“We made a lot of plays tonight,” Napier said. “We moved it well at times. We just made a few too many mistakes and in a game like that, ultimately those add up.

“They played well enough to win, and we certainly didn’t. There’s going to be a handful of plays where we’ll say we can coach better and play better.”

McCall was 17-of-24 passing for 202 yards with two touchdowns and no interceptions.

He also complemented a trio of hard-running backs by adding 45 yards on 11 carries.

CJ Marable led the backs with 73 yards and a score on 17 carries, in addition to three catches for 40 yards and another score.

“We had to adjust to those angles and the speed of the game,” Napier said of defending Coastal’s option game. “We can play some of those blocks better. I think we made some good adjustments within the game to slow that down. Like in most weeks, you get a few wrinkles from them, and you’ve got to adjust to those wrinkles.

“We can play better. There’s no question but a lot of the credit goes to Coastal. That was a good football game and certainly there was a little bit of good and bad for both teams in all three phases.”

In fact, UL’s defense didn’t begin to get a hold of Coastal’s pitch game until late in the third quarter when redshirt junior safety Ja’Len Johnson delivered a big stop for a 2-yard loss to force a punt.

“That’s what we practiced every day,” said Johnson, who had a career-high eight tackles in the game. “You just have to go out there and execute your assignment. It really wasn’t hard. We just need to execute our assignment better than we did throughout the game.”

The disappointing finish to the seesaw battle for the Cajuns overshadowed a nice performer by senior wide receiver Jalen Williams with four receptions for 89 yards and a touchdown, as well as the balanced, 240-yard rushing attack with contributions from quarterback Levi Lewis with 84 yards, Trey Ragas with 77, Mitchell with 39 and Chris Smith with 36.

“A lot of credit goes to Coastal Carolina for their level of execution,” Napier said. “We made a few too many mistakes to win the game. We certainly had our opportunities. But a lot of credit to Coastal. Their players played well, and they coached well.”

One change for Cajuns, quarterback Levi Lewis used his legs more during loss to Coastal Carolina