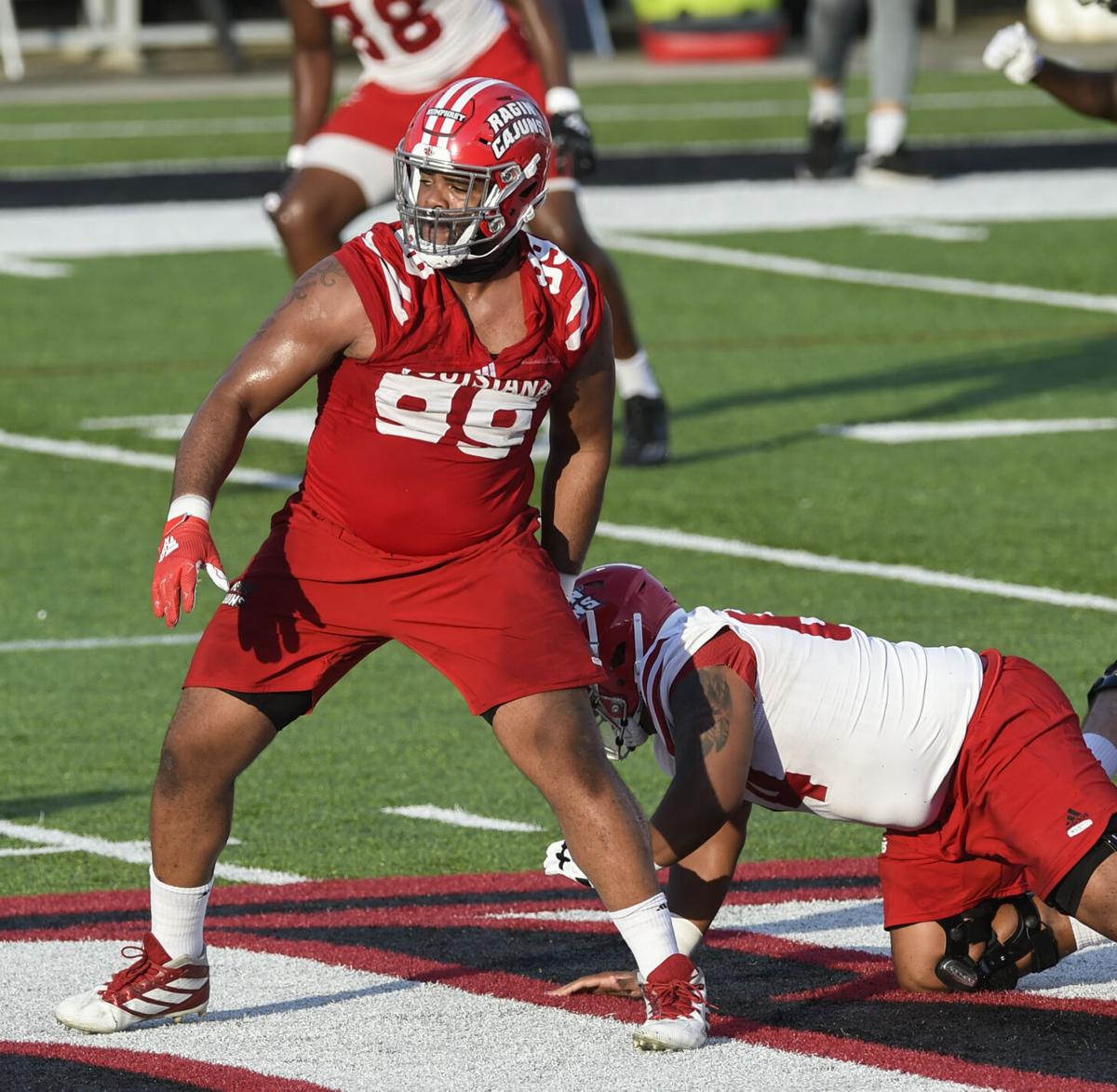 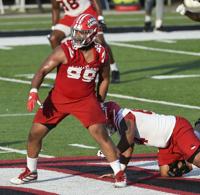 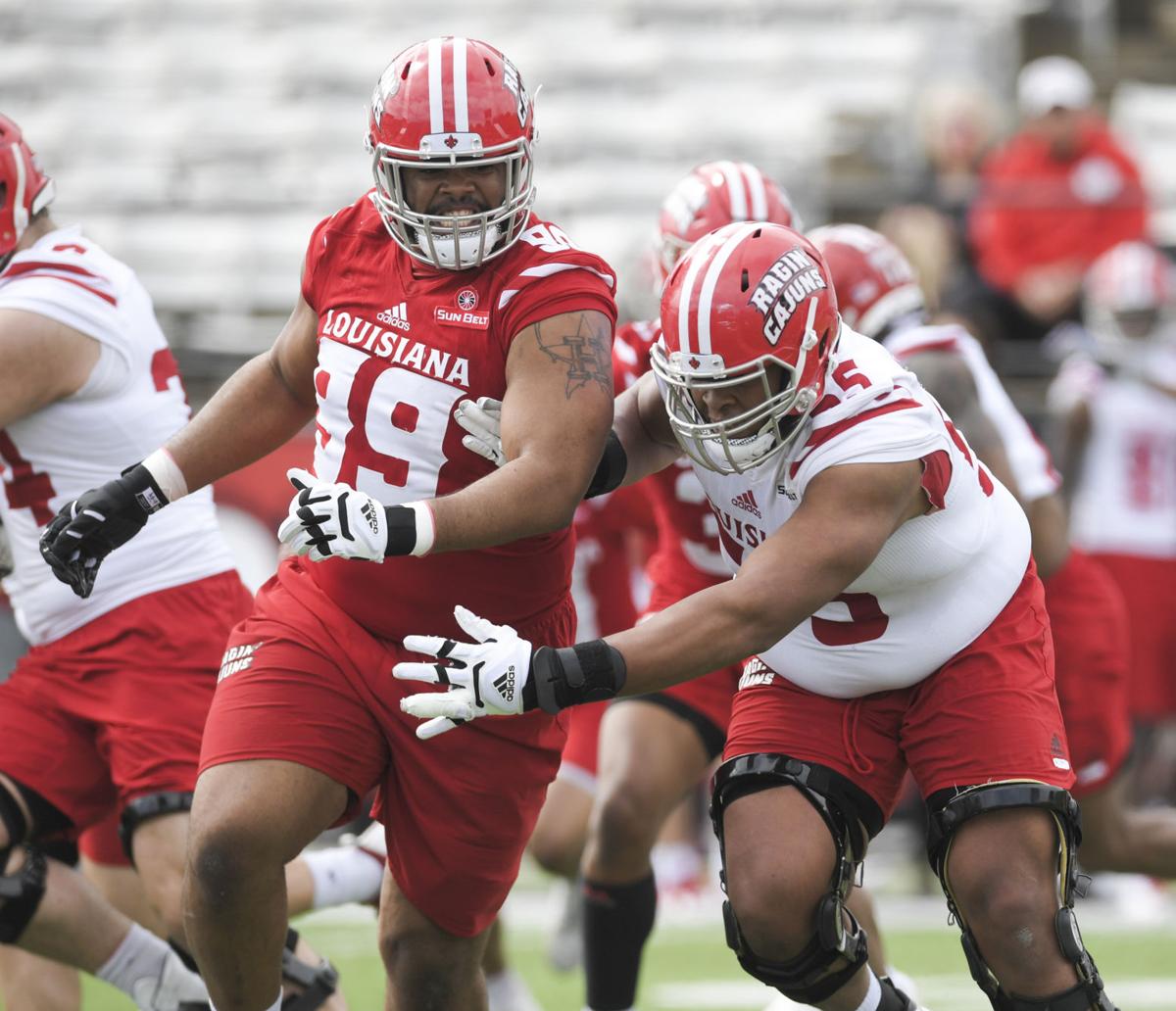 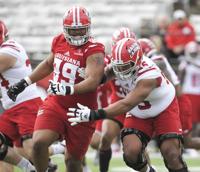 UL defensive lineman Tayland Humphrey (99) and offense guard O'Cyrus Torrence (55) battle each other during a drill on the first day of spring football practice at Cajun Field.

UL defensive lineman Tayland Humphrey (99) and offense guard O'Cyrus Torrence (55) battle each other during a drill on the first day of spring football practice at Cajun Field.

For a while after transferring from Florida International before last season, there was some hope the 6-foot-5, 333-pound defensive tackle could aid last year’s defensive unit.

Humphrey was hoping as well.

The patience learned through that process has the former Klein Oak High of Houston standout even more determined for this fall.

“It’s been real humbling,” Humphrey said of the waiting. “I had a lot of time to reflect and catch myself and reevaluate life and how I play … turning over a new leaf.”

After two seasons at Hutchinson Community College, the redshirt senior was at Florida International for the 2018 season, where he collected 15 tackles and a sack in 12 games, including eight starts.

“I wasn’t comfortable with the coaches,” he explained of his experience in South Florida. “There were a lot of trust issues. So I decided to leave.”

Before he made it back home to Houston, though, Humphrey turned a conversation with UL assistant coach Jabbar Juluke into a visit to Lafayette.

“First of all, the coaches, they were all welcoming,” Humphrey explained. “Immediately felt comfortable. It was weird. I walked in and immediately it felt like home.”

Wondering if he’d then get to play right away added anxiety to the move.

“It was tough honestly,” Humphrey said. “In my head, I was preparing like I was going to play. But in the back of my head, I knew if I don’t get eligible, I’m going to still have to keep on going hard. So I just kept on going hard every day, all day.

“Last year, it was hard watching football — being on the sidelines instead of on the field. It was very humbling to me. Now I’ve turned over a new leaf and I feel like this is a new Tayland.”

On the outside looking in, the case of the UL offensive line this fall might seem a bit curious.

And while the fans didn’t get to see Humphrey in action, UL’s coaches saw the potential impact he could make during practice sessions.

“Tayland Humphrey brings a little something different,” UL coach Billy Napier said. “You guys haven’t seen him, but we’ve practiced against him. We know what he can be.”

Humphrey can clearly see his role on UL’s 2020 defensive unit.

“I see myself fitting in pretty good,” he said. “I put in a lot of hard work with my teammates. We’re just all ready to get to work.

“I see my role being right there in the middle, stopping the run and disrupting the quarterback on the pass.”

New defensive coordinator Patrick Toney is certainly elated to have this newcomer aid in his transition from the secondary.

Like so many teams across the nation, the UL Ragin’ Cajuns are planning on playing football in 2020 but still aren’t 100% sure of their schedule.

“Tayland brings a huge presence in the middle of the defense,” Toney said. “To play good defense, philosophically in my opinion, it starts inside out, right? That’s going to be a huge help to have a guy who is going to command double teams at that position. It’s going to have an impact in the pass rush to be able to push the pocket.”

During his first season in Lafayette, Toney is impressed with Humphrey’s progress.

“And you know, Tayland’s a guy who has worked extremely hard since he’s gotten here,” Toney said. “He’s gotten in shape, he’s gotten stronger and he’s learned the defense. He’s moving well. To have that guy in the middle is going to help us and hopefully improve us from a rush defensive standpoint first and foremost. We’re excited to be working with him.”

Humphrey doesn’t even think the offseason coronavirus obstacles will keep him from achieving his potential with the Cajuns this fall.

“It’s not that hard,” Humphrey said. “I talk to the guys a lot. We have group chats that we’re in. We talk regularly with the coaches. We talked regularly about the plays and football. So I feel like I’m going to be pretty comfortable and I’m going to fit in just fine.”

After all, he’s had to wait too long to pass up this opportunity.

“(Learned) just to appreciate the game,” he said, “because you never know when it’s going to be taking away from you. It’s just very humbling.”

In Billy Napier’s original master plan, how he felt opening Year 3 as Ragin’ Cajuns coach Thursday wasn’t supposed to be like this.