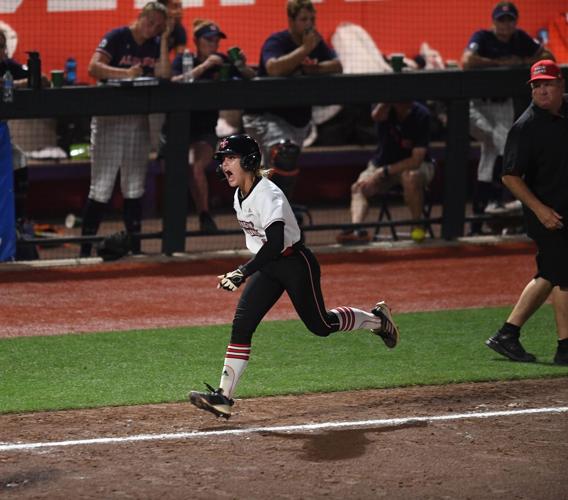 UL's Stormy Kotzelnick celebrates her game-winning home run during the Cajuns' 4-3 win over Auburn on Saturday at the Clemson Regional. 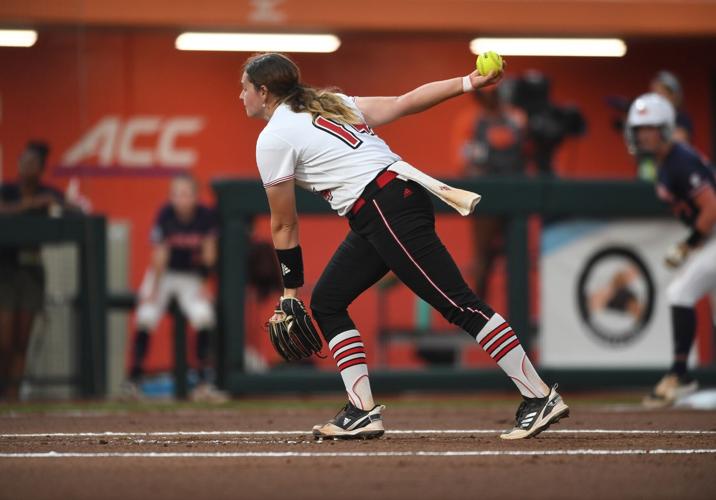 UL's Stormy Kotzelnick celebrates her game-winning home run during the Cajuns' 4-3 win over Auburn on Saturday at the Clemson Regional.

It was the seventh inning and her UL Ragin’ Cajuns were trying to nail down a two-run lead over No. 2-seeded Auburn with a trip to championship Sunday on the line in the NCAA Clemson Regional.

Suddenly, the tying runners were in scoring position with Tigers’ slugger Bri Ellis up.

All Ellis had done the day before was hit two homers off UL pitcher Meghan Schorman in a 4-3 win.

Instead of yielding to the conventional wisdom of walking Ellis, Schorman came right at her and one batter later was celebrating UL’s dramatic 4-3 win to eliminate Auburn late Saturday.

“He (UL pitching coach Justin Robichaux) came out there and said, ‘This is the girl,’” Schorman laughed. “I was like, ‘I know.’ He was like, ‘Just attack her and hit your spots.

“We kind of pitched to her the whole game. That’s just the competitive spirit in me. You beat me once, you beat me twice, OK, but you’re not going to beat me again.”

Ellis hit a long fly ball to left that Kayla Falterman flagged down for a sacrifice fly to trim UL’s lead to 4-3 with two outs and the tying run still on second.

The work wasn’t over, though. Jessie Blaine then sent a long fly ball to left that Falterman camped under right in front of the wall for the final out.

“Off of Bri, I didn’t think it was out,” Schorman revealed. “She got too much air under it. It was too high up when it came off the bat.

It was a dramatic end to a long afternoon in Clemson, South Carolina for the Cajuns.

After getting the three-inning win in Saturday’s first game – a 3-1 win over UNC-Wilmington thanks to Taylor Roman’s walk-off homer in 11 innings - Schorman threw 96 more pitches in all seven innings, allowing three runs (two earned) on seven hits, one walk and struck out six.

The new shortstop Melissa Mayeux got UL on the board first in the second inning with a leadoff homer to cut Auburn’s lead to 2-1.

Mayeux had three hits, including a double and a triple, in Saturday’s first win.

With two outs in the third, Jourdyn Campbell got into the act with a solo blast to left to knot the game at 2-2.

In the fifth, Stormy Kotzelnick really got her dugout dancing.

Initially it appeared UL would have two on with no outs in front of her, but Falterman was called out for being out of the box.

It wouldn’t matter, because Kotzelnick came through with a long two-run homer off the flag pole in center for a 4-2 Cajuns’ lead.

“This is obviously my first experience going through an NCAA tournament going through a college season,” Kotzelnick said. “It was tough out there. I could even hear the fans say, ‘Be tough, be tough.’ I was like, ‘Oh I know I’m push. I know I can find a way to push through it.’

“I was just more than excited that I could be able to push through it in that moment for my team, especially for Meghan. When I’m playing behind her and she’s working so hard, ‘Ok, let’s stop all the thinking and let’s just try to produce something for her.’ That was kind of my mentality going into that last at-bat.”

Auburn’s two long outs in the seventh were fitting because UL clubbed three long fly balls in Friday’s 4-3 loss to the Tigers that looked like homers off the bat.

Glasco also praised Lamb for her eight strong innings in Saturday’s first win, before handing it over to Schorman.

“She was phenomenal today,” Glasco said of Lamb. “I was really proud of her. She stepped up. Last year, she had a 2-0 shutout over at LSU in the regional. I had a lot of faith in her and she showed what she’s made out of. I thought she did a phenomenal job.”

Glasco had been quarantined all week, forcing him to miss Friday’s loss to Auburn. Saturday, he was there to witness his young team take the program to championship Sunday for the 14th straight time.

“I don’t have the words to say how proud I am of them,” he said. “I’m a proud coach right now. I’m happy for my players. I’m thrilled for them. I put them in a really bad spot and I felt terrible about putting them in a bad spot.

“To see them get a chance to play on Sunday and the way they performed – the way Meghan competed all weekend – the way Kandra compete, the way our hitters competed and adjusted in game two, I couldn’t be prouder of this group of girls.”