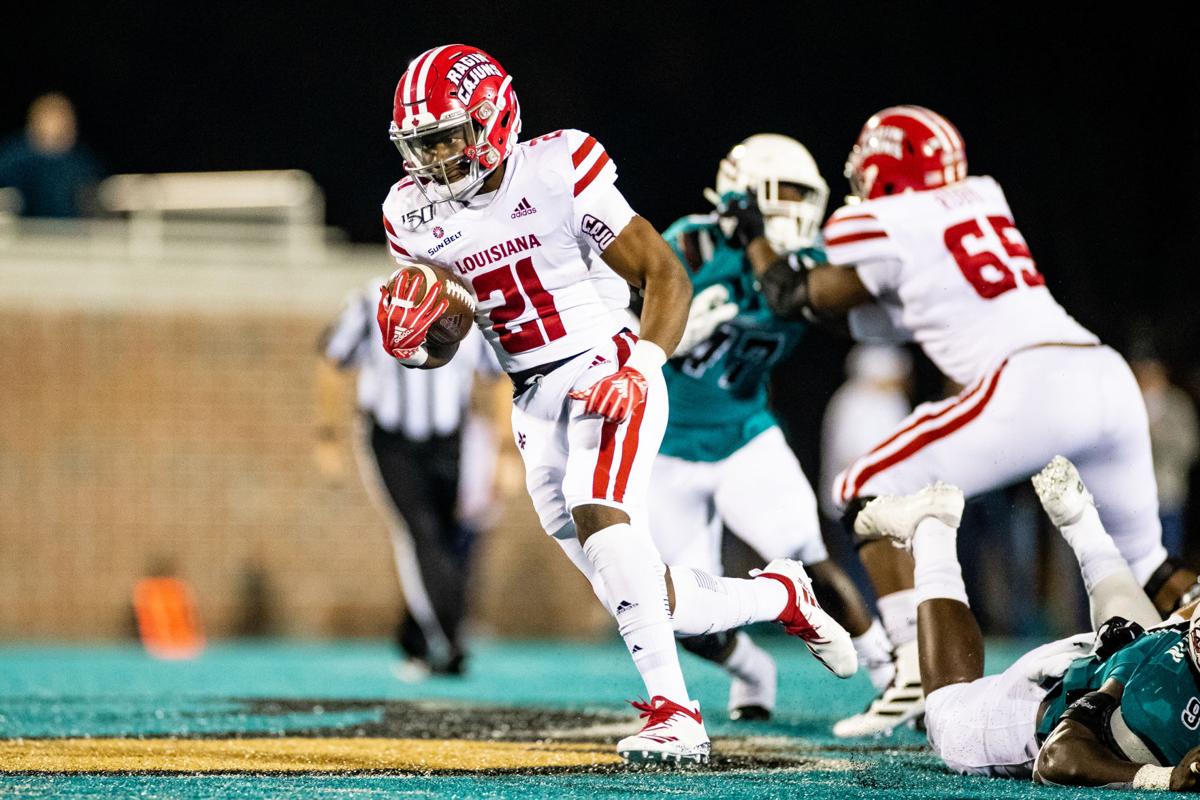 UL running back Chris Smith (21), shown here giving an early sign of his potential with a 52-yard TD run last season at Coastal Carolina, is hoping to return for the rematch Thursday after suffering an ankle injury against Georgia Southern. 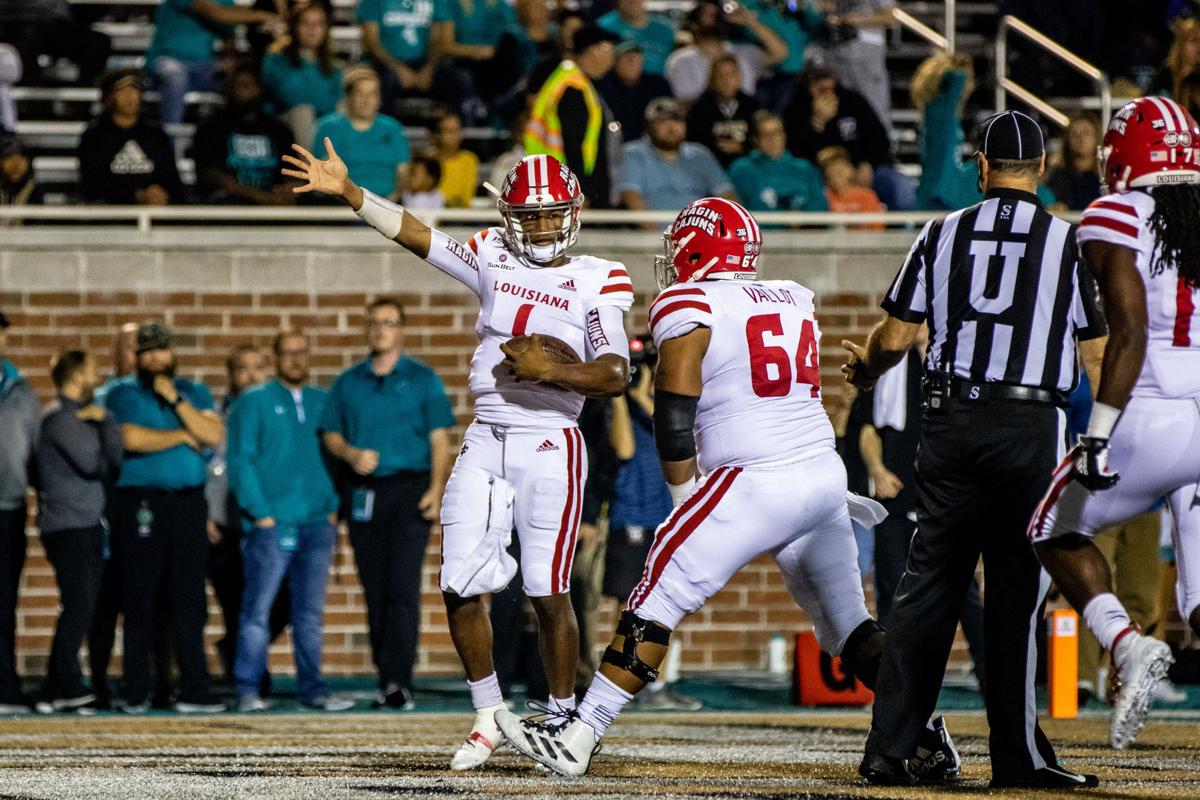 UL running back Chris Smith (21), shown here giving an early sign of his potential with a 52-yard TD run last season at Coastal Carolina, is hoping to return for the rematch Thursday after suffering an ankle injury against Georgia Southern.

For the first time since a 20-18 come-from-behind win over Georgia Southern at the buzzer on Sept. 26, the No. 21-ranked UL Ragin’ Cajuns will hit the field again Wednesday.

The game is a Sun Belt Conference battle of 3-0 unbeatens with red-hot Coastal Carolina coming to town for a 6:30 p.m. showdown on ESPN.

Will that long layoff be a benefit or yet another obstacle for UL coach Billy Napier’s squad against the visiting Chanticleers, who last played Oct. 3 in a dominating 52-23 home win over Arkansas State?

“It’s been a blessing in disguise,” Napier said. “I don’t want to make slight of the hurricane or what App. State was going through from a COVID standpoint. But from a timing standpoint, we were a little banged up from a football perspective and then we did have a handful of players that were out doing contact tracing.

“This is as healthy as we’ve been since the opener. In general, I do think it’s given us an opportunity to work on ourselves. Part of working on ourselves has been getting healthy.”

UL vs. Coastal Carolina on Wednesday night: Prediction, players to watch and more

UL’s announced depth chart for this contest features a long list of standouts that weren’t available against Georgia Southern. Back on offense are: WR Dontae Fleming, OT Max Mitchell and RB Elijah Mitchell.

Furthermore, running back Chris Smith has been battling an ankle injury throughout the layoff and he also could play Wednesday.

“He’s getting better,” Napier said of Smith’s status on Sunday. “He’s certainly not 100% today, but we’ve got time there and he may be available when we do get to the kickoff.”

Although not as long, Coastal Carolina coach Jamey Chadwell agreed the extra time could help.

“It gives you obviously a couple days more of preparations,” he said. “The hard part was you think you’re playing Saturday and it gets moved and all these different things. I think it was actually harder at the beginning of the week because you really don’t know with the hurricane. But it does give you a couple extra days to clean up some things, a couple extra days to try to get some guys back that maybe got banged up in the Arkansas State game, so it was beneficial.”

On the surface, it’s been a banner season so far for the UL Ragin’ Cajuns football team.

For the Cajuns’ cause, it’s a good thing so many defensive standouts are returning this week. Coastal’s offense has been explosive, ranking fourth nationally with 44.3 points a game.

The biggest reason for the improvement has been redshirt freshman quarterback Grayson McCall, who has thrown for 728 yards with nine TDs and just one interception, while running for 139 and two scores.

“They’ve tweaked their scheme a little bit,” Napier said. “A lot of it has to do with them doing what their quarterback can do. The young redshirt freshman quarterback has played well, he’s played at an efficient level, he’s been accurate all over the field — vertical passing game, short passing game.”

“Their concepts when they run are unique, things you maybe don’t see week in and week out,” Napier said. “They’ve got a whole committee of backs and then I think the receivers have played better. They’ve taken a step forward.

“You saw some of that production last week against Arkansas State. I think the collection of all of this personnel to go along with coach Chadwell kind of settling in there and putting his stamp on it — they’ve scored and, ultimately, that’s the objective.”

A year ago, the Cajuns steamrolled Coastal on the road 48-7, putting up 564 total yards while limiting the Chanticleers to 236.

“I think they are improved,” Napier said of Coastal's defense. “Coach (Chad) Staggs is in his second year. He’s a really good coach. I think he’s got a really good understanding of his system. I think the personnel has gotten better.

“The big nose that’s 335 pounds has a presence in the middle. The inside backer (Silas Kelly) that was injured last year that played two years ago is back. He does a good job of communicating in there. He’s kind of a quarterback of the front seven.”

Napier said he’s convinced his players aren’t consumed by the team's No. 21 national ranking and will take Coastal seriously.

“The film doesn’t lie,” Napier said. “These guys know good players when they see them. They know a team that plays with effort, physicality, a team that has good fundamentals and has a number of variables that can create issues for you. Coastal definitely checks all of those boxes.”

Napier doesn’t want his team to overlook those responsible for Wednesday’s showdown being possible in this season filled with cancellations.

“I also don’t think we need to take for granted that we’re going to have an opportunity to play Wednesday night because of a lot of hard work by our administration, local law enforcement and our local health professionals, not to mention all the people that work for all of these power companies and the people that work on campus,” Napier said.

With Hurricane Delta's expected arrival in the area Saturday, UL's home meeting with Coastal Carolina has been postponed to Wednesday, Oct. 14.