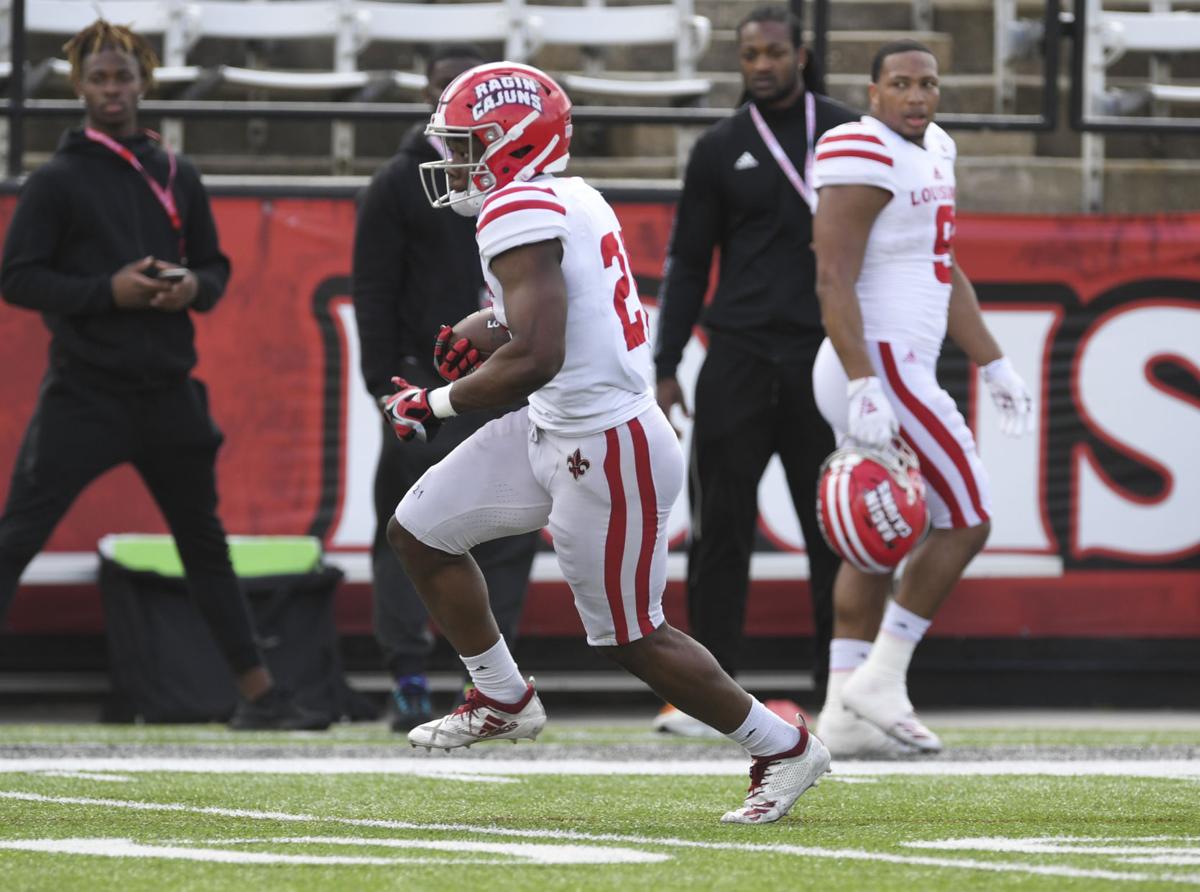 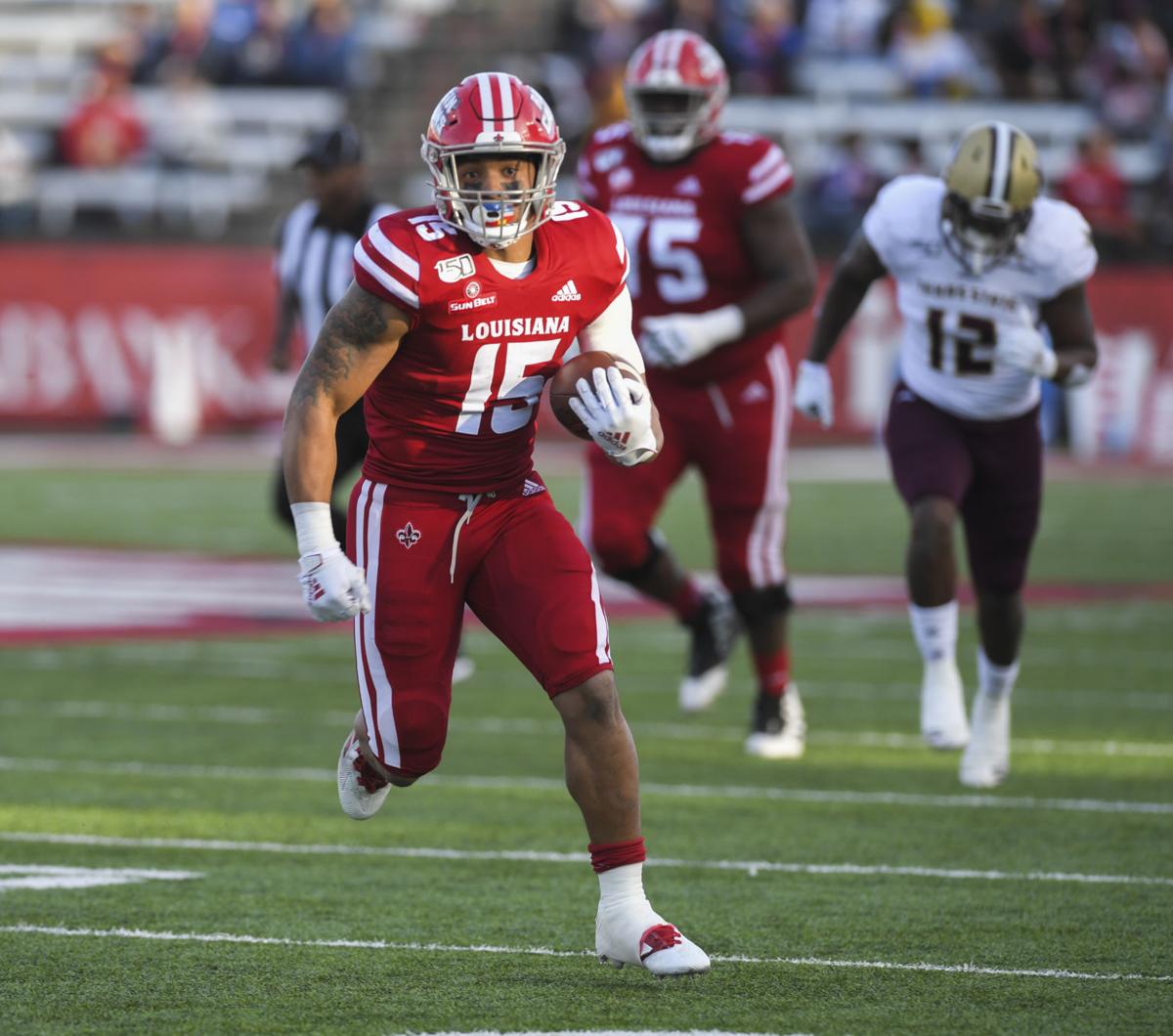 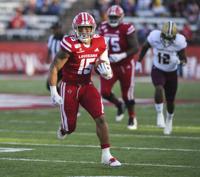 UL running back Elijah Mitchell (15) is hoping to produce his second 1,000-yard rushing season for the Cajuns this fall. 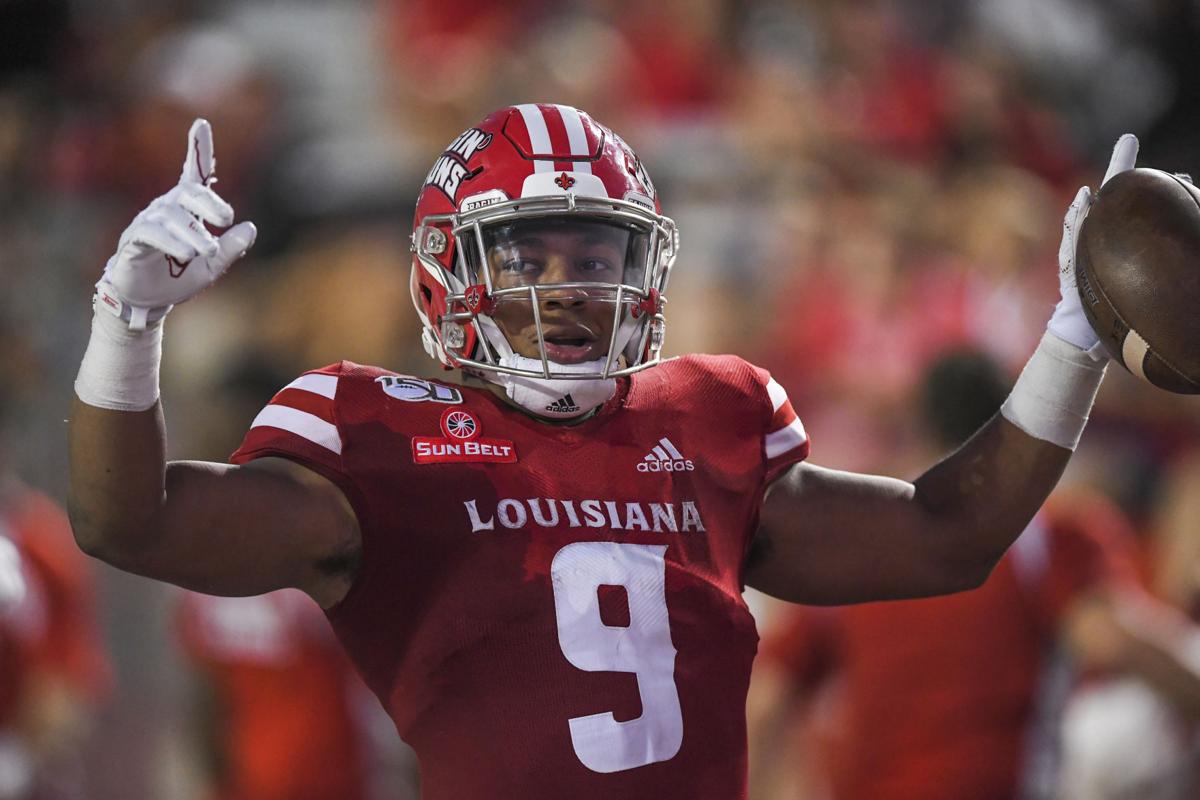 UL running back Trey Ragas is hoping to finish off his stellar career with the Ragin' Cajuns in style this fall. He's currently 521 yards away from surpassing Brian Mitchell into No. 3 on the program's all-time rushing list.

UL running back Elijah Mitchell (15) is hoping to produce his second 1,000-yard rushing season for the Cajuns this fall.

UL running back Trey Ragas is hoping to finish off his stellar career with the Ragin' Cajuns in style this fall. He's currently 521 yards away from surpassing Brian Mitchell into No. 3 on the program's all-time rushing list.

Until Tyrell Fenroy came around in 2005, no Ragin’ Cajuns running back had ever rushed for 1,000 yards in a season.

Fenroy changed that by doing it all four years of his and remains the program’s all-time leading rusher with 4,646 yards.

Until Elijah McGuire was picked in the sixth round by the New York Jets in 2017, no Cajuns running back was drafted by the NFL.

Since Fenroy, achieving those feats have gone from an historic goal to the expected.

One Iowa State player UL coach Billy Napier didn’t have to watch a minute of film to be sold on was junior quarterback Brock Purdy.

“This room, we are something really special,” Mitchell said. “The sky is the limit for us.”

Making the recent trend even more unusual is almost every one has been a Louisiana product.

McGuire — of Vandebilt Catholic in Houma — followed  Fenroy, who play high school at St. Charles, with three 1,000-yard seasons from 2013-16.

Last year, former Cecilia all-state MVP Raymond Calais became the second UL running back drafted with Tampa Bay picking him in the seventh round. The Bucs released Calais, but the Los Angeles Rams immediately scooped him up.

So now Mitchell of Erath, Ragas from Shaw in New Orleans and yes, even Smith from Mississippi are determined to ride the recent wave.

“For me and Eli, we talk about that all the time,” Ragas said of the NFL draft. “That really inspires us, because that’s somebody in our own room. Just like Elijah McGuire, he got drafted. It shows us that it’s real. We’ve got the power to reach the next level. It’s in our hands to prove that we can take the step forward and play big-boy ball.”

Calais was the speed part of UL’s three-headed running back monster last season that finished sixth nationally in yards rushing (3,604), third in yards per rush (6.28) and third in rushing touchdowns (42).

Many are now wondering if Mitchell and Ragas will follow suit and also get taken in the 2021 NFL draft.

“The grades we got back after last year would certainly point in that direction,” Napier said. “So a huge year for them to try to increase their value. The way they play this year will have a lot to do with the value the can create for themselves.

Ragas rushed for 820 yards and 11 scores last year after collecting 1,181 yards as a sophomore.

“Each year, we all had our different time to shine,” Ragas said. “My year was the first year when coach Nape came. Then this past year was Eli and Ray. I don’t think I’m getting looked over for sure. If I am, I’m going to show them this year.”

It’s that team-first mentality that’s allowed the offense to shine with so many backs and only one football.

“I think those two guys are exceptional people,” Napier said of Ragas and Mitchell.

“They’re great examples to the rest of the team about how to be selfless, how to share the load, how to share the attention, how to play well without the ball, how to be a good teammate, how to go about your business in the community and on campus," Napier said. "Both are Louisiana kids and certainly have the tools to be players that can play at the next level. I don’t think there’s any doubt that about.”

Before Fenroy, quarterback Brian Mitchell’s 1,311 yards rushing in 1989 was the program's only 1,000-yard rushing season. If Mitchell and Ragas can at least duplicate last year's rushing totals, both will surpass Mitchell's status as No. 3 on the school's all-time rushing list.

Ragas said he is unconcerned about how the crazy offseason or potentially the lack of postseason games might impact his draft status.

“I’m really not worried based on what I’m hearing from agents,” he said.

“Seeing Raymond and the rest of our guys getting drafted, it’s like, ‘I want to be next,’ ” Mitchell said.

UL’s running game has certainly caught the attention of Iowa State coach Matt Campbell, whose No. 23-ranked Cyclones await the Cajuns at 11 a.m. Saturday in Ames, Iowa on ESPN.

“They’re big, they’re physical, they’re powerful, really impressed with that (offensive line) group coming back,” Campbell said. “I think from a running back standpoint, starting with Mitchell, I think a guy that I love tough, gritty, hard-nosed football players. To me, that’s what you get with Mitchell.”

Offensive coordinator Rob Sale said the backfield’s success should start with an unyielding expectation of the offensive line.

“I don’t know them to make a guy miss in the backfield. No, no, no, no … that’s a reflection on us upfront, us not doing a job — us not putting a hat on a hat. So get them in space and let them make plays.”

Max Mitchell's expectations for Cajuns, offensive line this fall are through the roof

As accomplished as Ragas and Mitchell are, perhaps the overall progress of running game is best illustrated by Smith.

Smith only got 32 carries last season, but averaged 10.4 yards per carry. Many are convinced he will equal or surpass Calais' production last season.

“I think it’s going to very fun to watch that kid,” right tackle Max Mitchell said of Smith. “He is an absolute freak when it comes to athletics and making plays like that. Watching film from last year when he got a chance to play, coach Sale says, “It’s Chris Smith doing Chris Smith stuff. I mean, he’s a playmaker.’

“I think he’s going to fit right into that three-headed monster that we had last year. So I’m very excited to see him play.”

For two programs that have never met on the football field, the UL Ragin’ Cajuns and the Iowa State Cyclones have a few things in common.