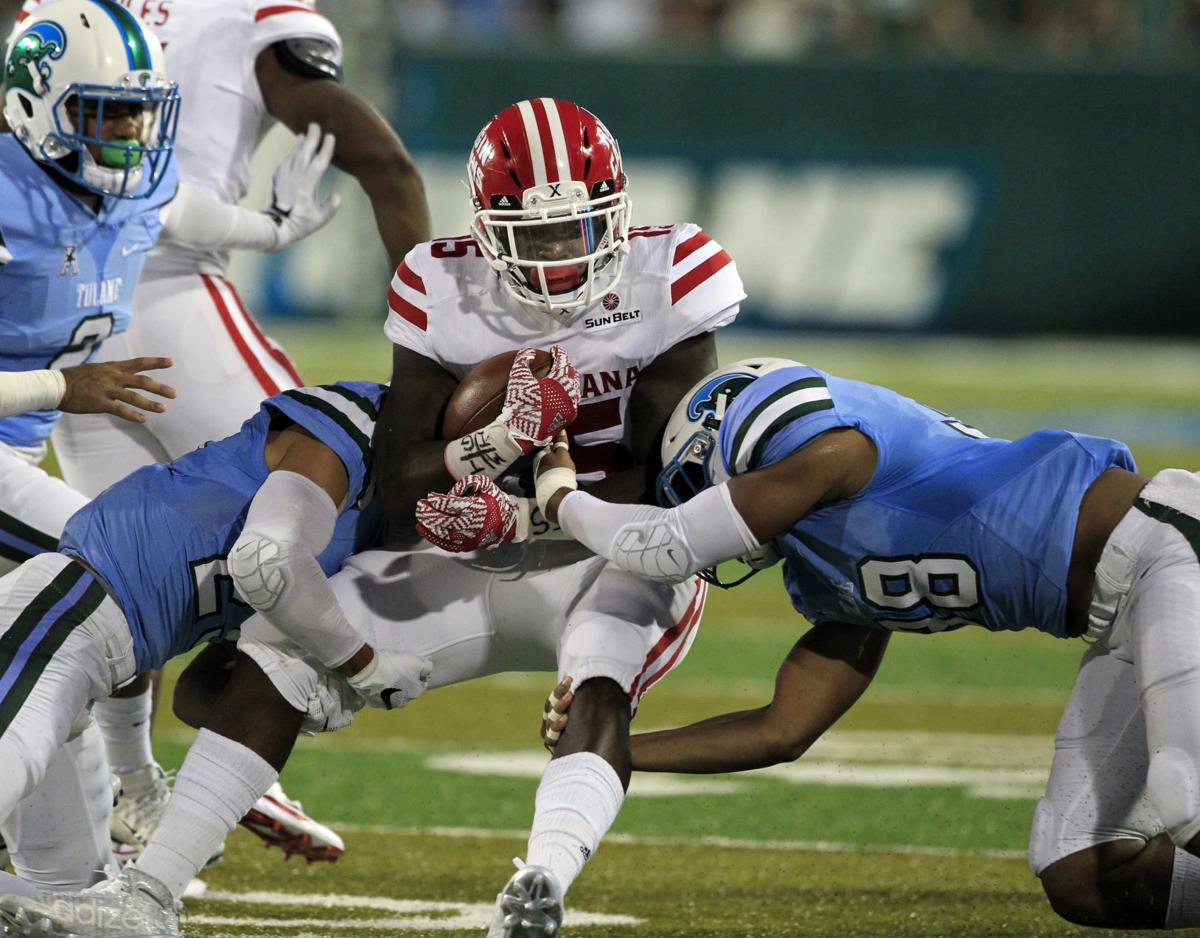 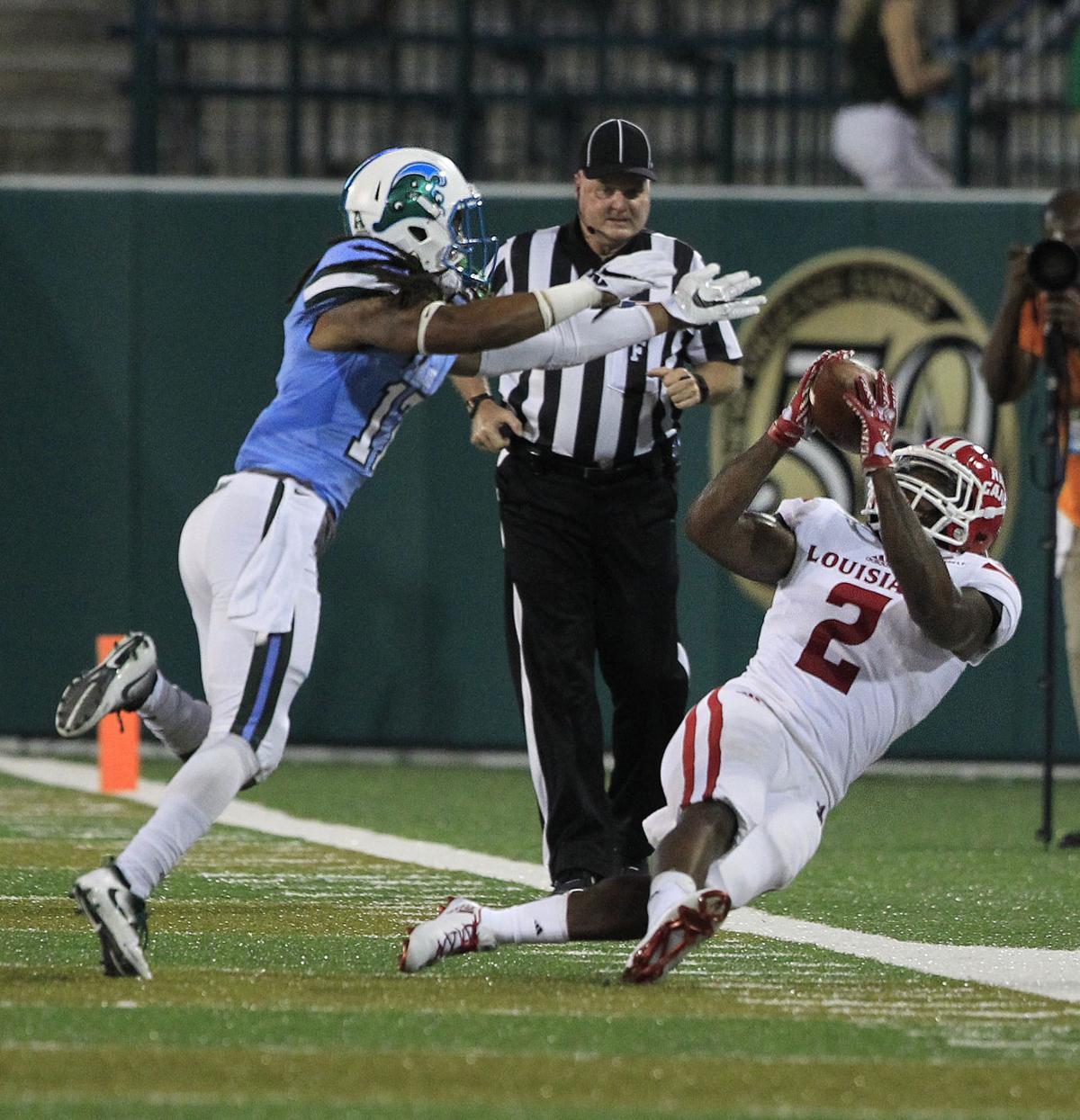 NEW ORLEANS – The marathon contest came down to one final play.

Louisiana-Lafayette scored on a 22-yard pass from Anthony Jennings to Elijah McGuire, who got sandwiched between two defenders. The Ragin’ Cajuns, however, needed to convert the 2-point conversion if they wanted to force a fifth overtime. After a timeout, Jennings snapped the ball and threw a short pass across the middle to Al Riles, but the senior wide receiver was brought down a few yards short of the goal line.

The Green Wave players rushed to midfield after defeating the Cajuns 41-39 in four overtimes.

The Cajuns' first drive appeared that it would field points as the offense went yards on 12 plays. The promising drive ended as Tulane linebacker Nico Marley strip sacked Anthony Jennings and defensive end Peter Woullard recovered the ball and returned it deep into Cajuns territory.

The Green Wave (2-2) though failed to capitalize on the miscue as the team went for it on fourth down but was stood up by the Cajuns’ defense. Tulane’s option offense never got going against Louisiana-Lafayette (2-2) as the Cajuns bottled up the Wave to a mere 83 yards in the first half, including 59 yards on the ground.

The Cajuns' second drive did result in points as Stevie Artigue hit a 40-yard field goal, and the Cajuns added to that lead early in the second quarter. A flea-flicker from Jennings to Ja’Marcus Bradley set up a 39-yard field goal by Artigue.

After moving the ball well, but not finding the end zone in the first quarter, the Cajuns offensive line struggled with pass protection as the game went along. The Green Wave recorded a season-high four sacks in the first half alone.

That disrupted the rhythm between Jennings and his wide receivers as at least three big-play passes were thrown to receivers who didn’t realize the ball was coming their way.

Two of those errant throws resulted in a pair of interceptions.

In the second quarter, Tulane cornerback Perry Nickerson easily picked off a pass intended for Bradley. Nickerson’s 37-yard return gave the Green Wave its best field position of the game, but the Cajuns defense stood tall. Tulane settled for a 22-yard field goal by Andrew DiRocco.

Later in the second, Jennings rushed his throw and tried to find Al Riles over the middle, but the pass was intercepted this time by cornerback Donnie Lewis Jr. Once again, the defense for the Cajuns stepped up and forced Wave to go minus-6 yards and settle for another field goal, a 35-yard kick by DiRocco.

The sluggish pace continued throughout the third quarter as both teams kept trading punts until one of those punts turned the tide of the game.

Eli McGuire muffed a high 54-yard punt, and it was recovered defensive back Richard Allen at the 6-yard line. With their backs in the shadow of the goal post, Louisiana-Lafayette’s defense once again rose to the occasion and kept Tulane out of the end zone. The Green Wave had to settle for a 20-yard field goal by DiRocco, but the Wave had its first lead of the game.

Despite committing four turnovers, the Green Wave managed to score only nine points off those miscues.

Louisiana-Lafayette’s special teams unit gave the Cajuns their best chance of scoring a touchdown through the first three quarters.

Near the end of the third, New Orleans native Corey Turner blocked a punt and T. J. Posey recovered, giving the Cajuns the ball at the 4-yard line. Louisiana-Lafayette had to settle for a fourth field goal by Artigue, this one from 20 yards out to tie the game at 9-9 with 3:18 left in the third quarter.

Tulane answered as the Green Wave went away from its option rushing attack and moved the ball through the air. Tulane went 75 yards on five plays, capped with a 34-yard touchdown pass from Glen Cuiellette to Terren Encalade for a 16-9 lead with 1:07 left in the third quarter.

With their backs to the wall, Louisiana-Lafayette responded by finding the end zone as the Cajuns put together a 17-play, 53-yard scoring drive, in which the team converted three fourth downs. Before Saturday, the Cajuns were 0-of-4 on fourth-down conversions.

All three conversions saw McGuire pick up the first down, including a 1-yard touchdown run to cap the drive, tying the game at 16-16 with 5:55 remaining in regulation.

Neither team scored again as the game went to overtime.

Louisiana-Lafayette went first, scoring on third down as Jennings found Keenan Barnes in the back of the end zone for a 10-yard touchdown and a 23-16 lead.

The Green Wave wasted no time as Cuiellette found Encalade on a 25-yard touchdown, finishing the first overtime with a 23-23 tie.

Tulane got the ball first in the second overtime and scored once again, as Cuiellette found Darnell Mooney for another 25-yard touchdown for a 30-23 lead.

Louisiana-Lafayette responded with a 24-yard run by Raymond Calais that placed the ball at the 1-yard line. McGuire then powered his way into the end zone to knot the game at 30-30 after two overtimes.

After UL-Lafayette settled for a 22-yard field goal by Artigue in the third overtime, the Green Wave had to do the same, but in more dramatic fashion as DiRocco kicked a 48-yard field goal to tie the game at 33-33 and force a fourth overtime.

Tulane struck first in the fourth overtime as Cuiellette hit Encalade for a seven-yard touchdown and then found a wide-open Kendall Ardoin in the left corner for the 2-point conversion for a 41-33 lead.

Louisiana-Lafayette responded with the Jennings-to-McGuire touchdown but the 2-point was no good as the Ragin’ Cajuns fell as they played in their first overtime game since 2009.