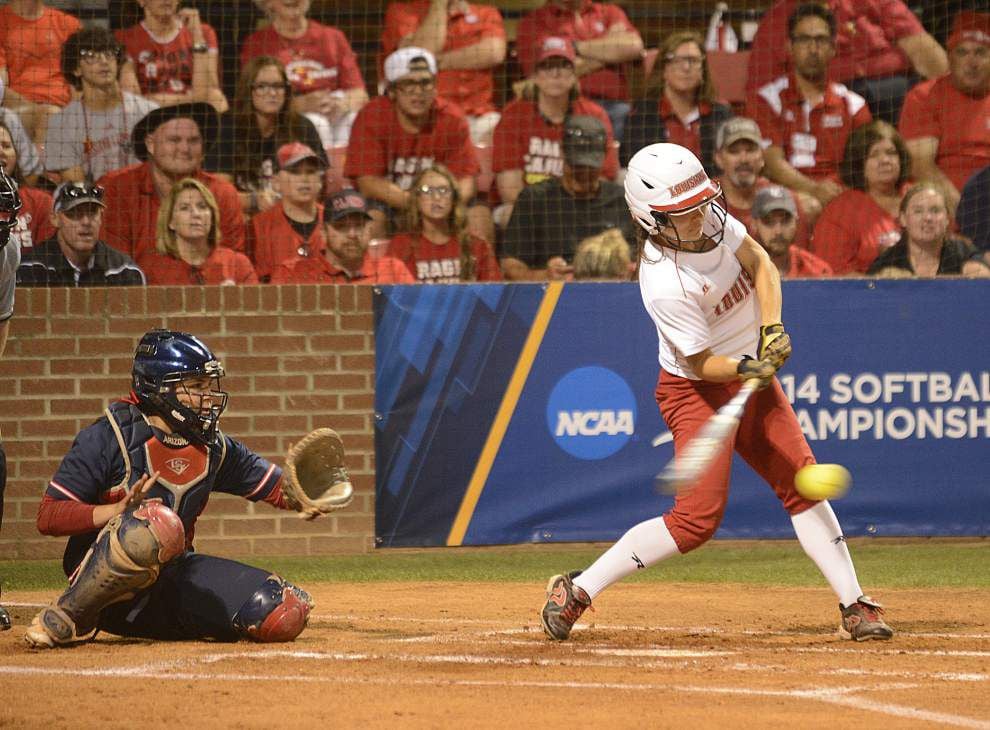 Advocate staff photo by BRYAN TUCK -- University of Louisiana at Lafayette's Arizona's Haley Hayden gets a hit against Arizona Friday during game one of the NCAA Super Regional Softball tournament in Lafayette. 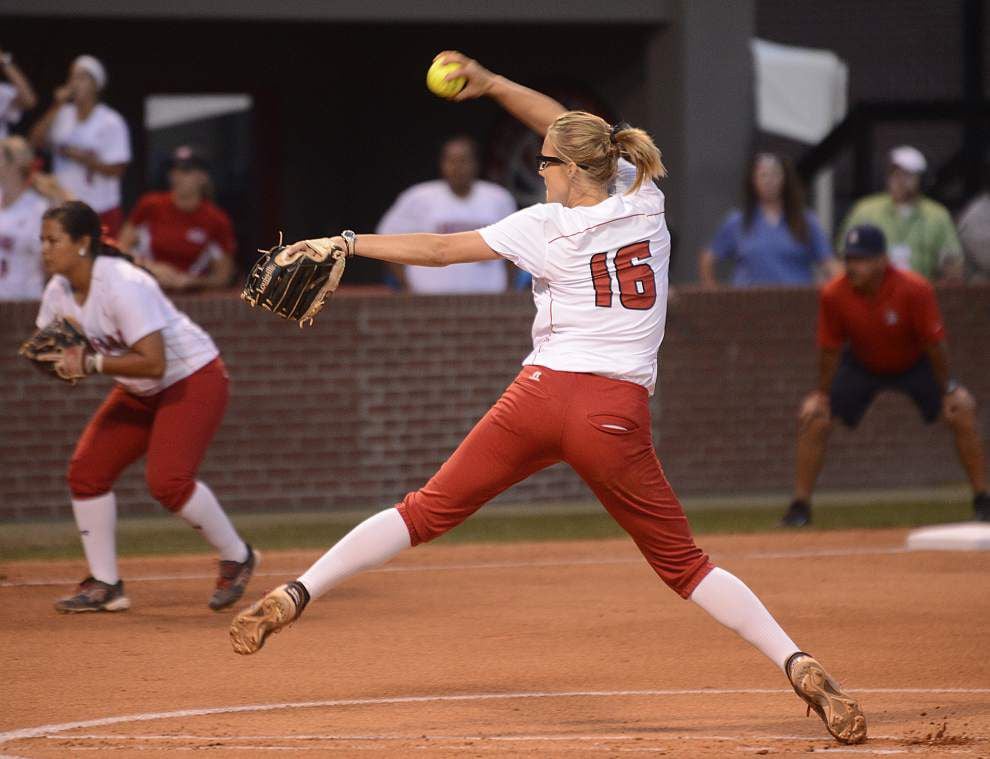 Advocate staff photo by BRYAN TUCK -- University of Louisiana at Lafayette's Christina Hamilton pitches against Arizona Friday during game one of the NCAA Super Regional Softball tournament in Lafayette.

Advocate staff photo by BRYAN TUCK -- UL-Lafayette's Samantha Walsh is greeted at home plate by her team after scoring a run against Arizona during Game 1 of the NCAA Super Regional Softball tournament in Lafayette.

Advocate staff photo by BRYAN TUCK -- University of Louisiana at Lafayette's Arizona's Haley Hayden gets a hit against Arizona Friday during game one of the NCAA Super Regional Softball tournament in Lafayette.

Advocate staff photo by BRYAN TUCK -- University of Louisiana at Lafayette's Christina Hamilton pitches against Arizona Friday during game one of the NCAA Super Regional Softball tournament in Lafayette.

Advocate staff photo by BRYAN TUCK -- UL-Lafayette's Samantha Walsh is greeted at home plate by her team after scoring a run against Arizona during Game 1 of the NCAA Super Regional Softball tournament in Lafayette.

And the second chance given to Samantha Walsh was how Louisiana-Lafayette inflicted damage in the teams’ NCAA softball super regional opener Friday night.

A foul tip off the end of Walsh’s bat didn’t stay in Goodacre’s mitt. Or so it was ruled.

Later, Walsh turned on another offering from pitcher Estela Piñon, launching it to straightaway center field for a two-run homer that kick-started a 5-3 victory for the Ragin’ Cajuns at Lamson Park.

“Honestly, I was just thinking about getting a hit,” Walsh said. “That was all.”

It put the Cajuns, the No. 6 national seed, a win away from ending a six-year drought with a trip to the Women’s College World Series if they can come up with a another win at 2 p.m. Saturday (or, if Arizona wins, in the rubber match following).

Besides, UL-Lafayette knows how quickly momentum can stall out.

Two years ago, it coasted to a series opening win at Arizona State behind a two-hit shutout by Jordan Price. A day later, the Sun Devils swamped the Cajuns by a combined score of 18-3 in a sweep that nixed any hopes of moving on to Oklahoma City.

“Right now, they’re still in a good mindset,” coach Michael Lotief said. “There won’t be any celebration. It’s going to be a war.”

She got the mistake out of the way early. Hamilton’s two-strike offering was a fat pitch to the first batter she faced, one Arizona’s Hallie Wilson lifted over the right-field wall for an early 1-0 lead.

For a moment, the buzz of the 2,691 in Lamson’s bleachers — many of whom lined up three hours before first pitch and snaked out onto the sidewalk along Cajundome Drive — died down.

“I had faith in Christina,” center fielder Haley Hayden said. “She came back and shut them down.”

Sure, Hamilton (28-2) allowed a bloop single and a walk that eventually put runners at the corners in the first. But she didn’t buckle. Instead, Hamilton deftly swerved around disaster.She got Goodacre swinging, then forced Mo Mercado into a fielder’s choice two batters later to escape the jam.

It would be another six innings before she hit turbulence, giving up a two-run homer to Kelsi Fox in the seventh to cut the lead to 5-3.

Hamilton then struck out Goodacre looking and followed up by getting Katiyana Mauga hacking at air on a rise ball for the second out. Calmly, she put aside a two-out single to Mercado when Lauren Young hit a soft, game-inning grounder to shortstop Corin Voinche.

After giving up the go-ahead homer to Elkins in the first, Piñon’s control was scattershot on a night when umpire Smokey Edds’ strike zone was tight.

The second chance granted to Walsh blotted out Arizona’s early lead and was just the start of a bumpy three-inning outing for Piñon.

The Cajuns did most of their damage with hacks that were more timely than thumping.

“It just kind of happened,” second baseman Natalie Fernandez said. “We didn’t swing at the pitches that we didn’t want and swung at the pitches we did want. We just stayed true to our game plan.”

In the bottom of the second, one when she never notched a first-pitch strike, Piñon (19-9) walked the first two batters she faced. While Piñon worked around designated player Sara Corbello and got Voinche to ground back to the circle, she couldn’t wriggle out of trouble.

“My game plan changed right before the pitch,” Hayden said. “I was just going to try to lay it down and get on first.”

Instead, she saw a defense shift, and in an instant it was no longer about setting the table for the next batter.

“I didn’t have time to think,” she said.

Piñon, who only threw 47 of 83 pitches for strikes, was touched up an inning later on a sacrifice fly by Corbello with the bases loaded that brought in Landry — a swing that sent right fielder Mauga drifting to the wall.

The Cajuns cashed in on chances that Arizona’s bats — ones that thumped a nation-leading 106 home runs this season — never could.

The heart of the Wildcats order — Goodacre, Mauga and Fox — that combined for 55 home runs and 189 RBIs this season was punchless Friday: The trio went 2-for-10 at the plate.

“We know that we’re not going to totally shut them down, but she just did a great job navigating through the game,” Lotief said. “I thought she was just so mentally tough tonight.”

So it hardly mattered that Arizona reliever Shelby Babcock, on shock duty, only allowed one hit — a Corbello double into the left-field gap during the bottom of the fifth — over four innings to buy her lineup a chance to cut into the deficit. And the Cajuns expect the Wildcats to stir up another slugfest Saturday.

“We don’t have a lot of time to celebrate,” Fernandez said. “We have to come out here and fight for every pitch.”