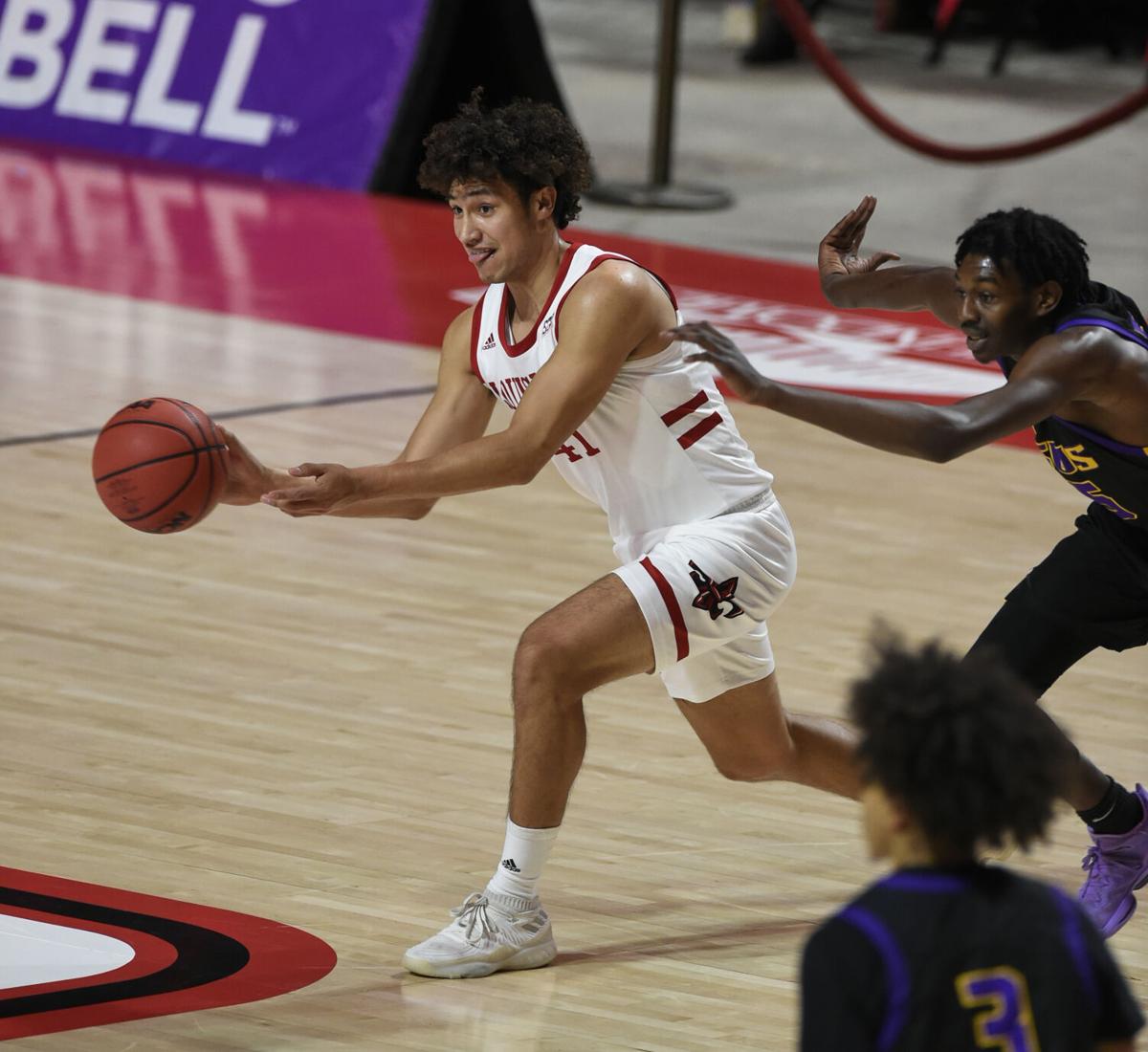 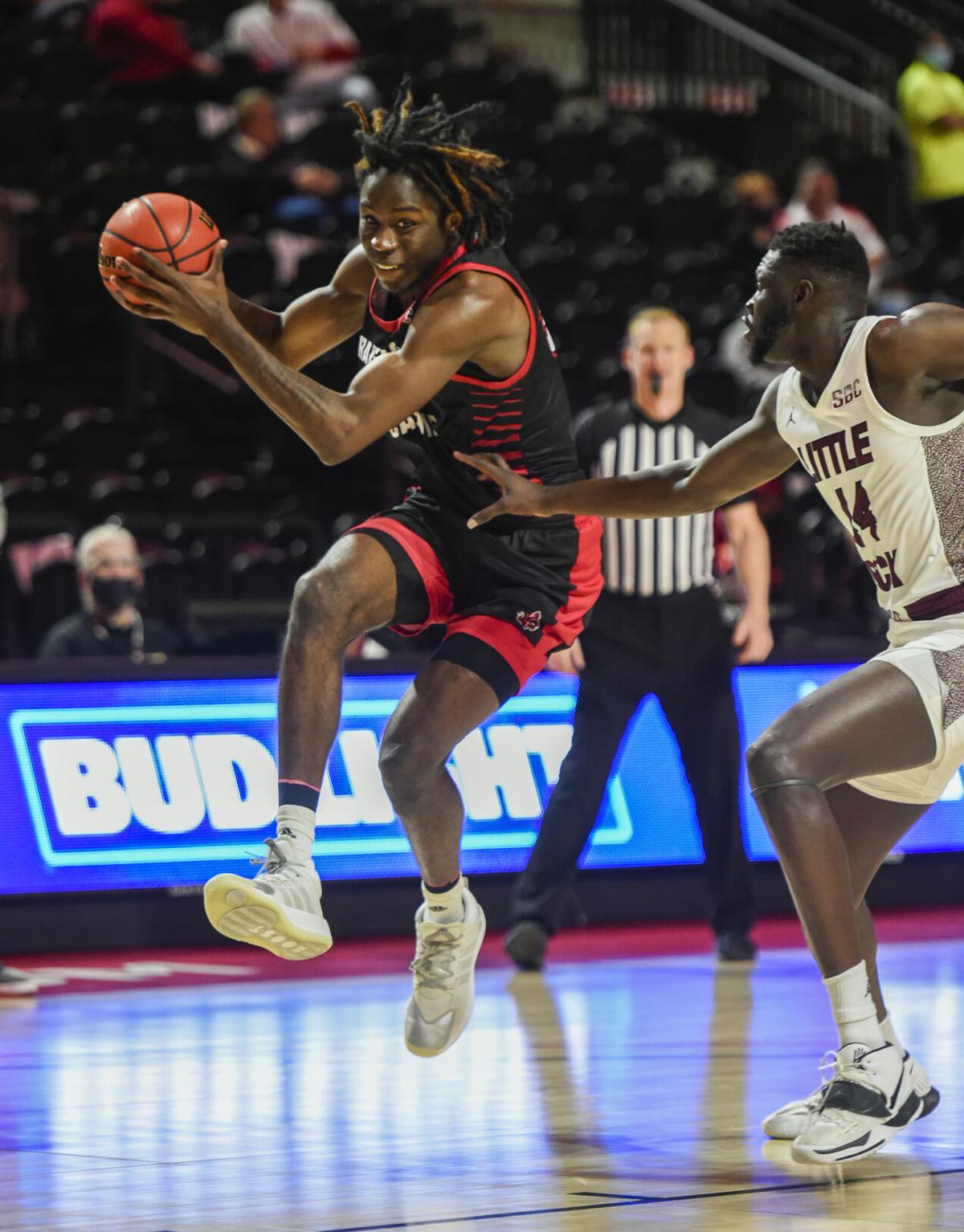 The Sun Belt Conference standings are what they are after this past weekend’s series split with Little Rock in the Cajundome.

In the East, Coastal Carolina and Appalachian State are off to 3-1 starts, while Little Rock is the only team in the West above .500 in the early going after surviving UL 78-76 in overtime Saturday.

But while coach Bob Marlin’s Ragin’ Cajuns are essentially in a four-way tie for second place in the Sun Belt West at 2-2, the eye test this weekend in the Cajundome told a different story.

Sure, the Cajuns’ overall record is a good one at 8-3. But few of those first seven wins illustrated the long-term staying power the two games against Little Rock did.

“Yes, I definitely feel like we got better as a team,” UL coach Bob Marlin said after Saturday’s loss. “We had a good week of practice and got better.”

Judging by Marlin’s Zoom responses since day one, practice hadn’t been the program. Transferring that offensive potential to the court has been.

Friday’s game was indeed the Cajuns' best 40 minutes, and the first half Saturday was their best half period so far this season.

More players seemed to be connecting the dots a little better against Little Rock.

Leading the parade was 6-foot-4 junior transfer Brayan Au, who played his best stretch of ball since joining the Cajuns over the weekend.

“I had a lot of talks with coach,” Au said. “He told me the reason he brought me here is to make a change in the team. At the beginning, it was hard for me to come from a JUCO to Division I because I feel like everything is different in the way that it’s played.

"I had a hard time adjusting and deciding when to take good shots. But a long talk with coach, it gave me the confidence to do what I do best.”

After scoring nine points with four rebounds and four assists in Friday’s win, Au made three of his four attempts behind the arc Saturday to contribute 11 points, 5 boards and 3 assists.

“He’s a very good shooter,” Marlin said. “He’s a career 40% shooter from 3. We see it in practice all the time. The move from the 2 to the 1, sometimes he plays the 2, but more than not he plays the 1 for us because he does a good job of understanding.”

That understanding was quite clear to Marlin during Saturday’s game. Three separate times, Au commented to Marlin about a play he felt the Cajuns should run, and “it was exactly the play I had in mind. So he’s starting to think like a quarterback or a point guard more.”

Despite faltering down the stretch Saturday to settle for a split, Au saw improvement over the last two games.

“Most definitely,” he said. “I feel like we improved so much since the last time we played. Every time we play, we play harder and harder and harder. We play more comfortable with each other. We become closer and closer. That makes it when we’re on the court, instead of just worried about winning, we’re having fun while we’re winning.”

Another reason for UL basketball fans to feel better about this weekend is the play of 6-4 freshman Ty Harper.

“I thought Ty Harper helped us there for a stretch — got a big dunk, made an athletic play,” Marlin said. “We started getting stops when we switched defense.”

Throw in 6-10 freshman Isaiah Richards and that’s a lot of young players displaying a ton of aggressiveness already.

Once mainstays like senior Cedric Richards and sophomore Mylik Wilson start getting their shots to fall more consistently, it’s getting easier to visualize this group making some noise down the stretch.