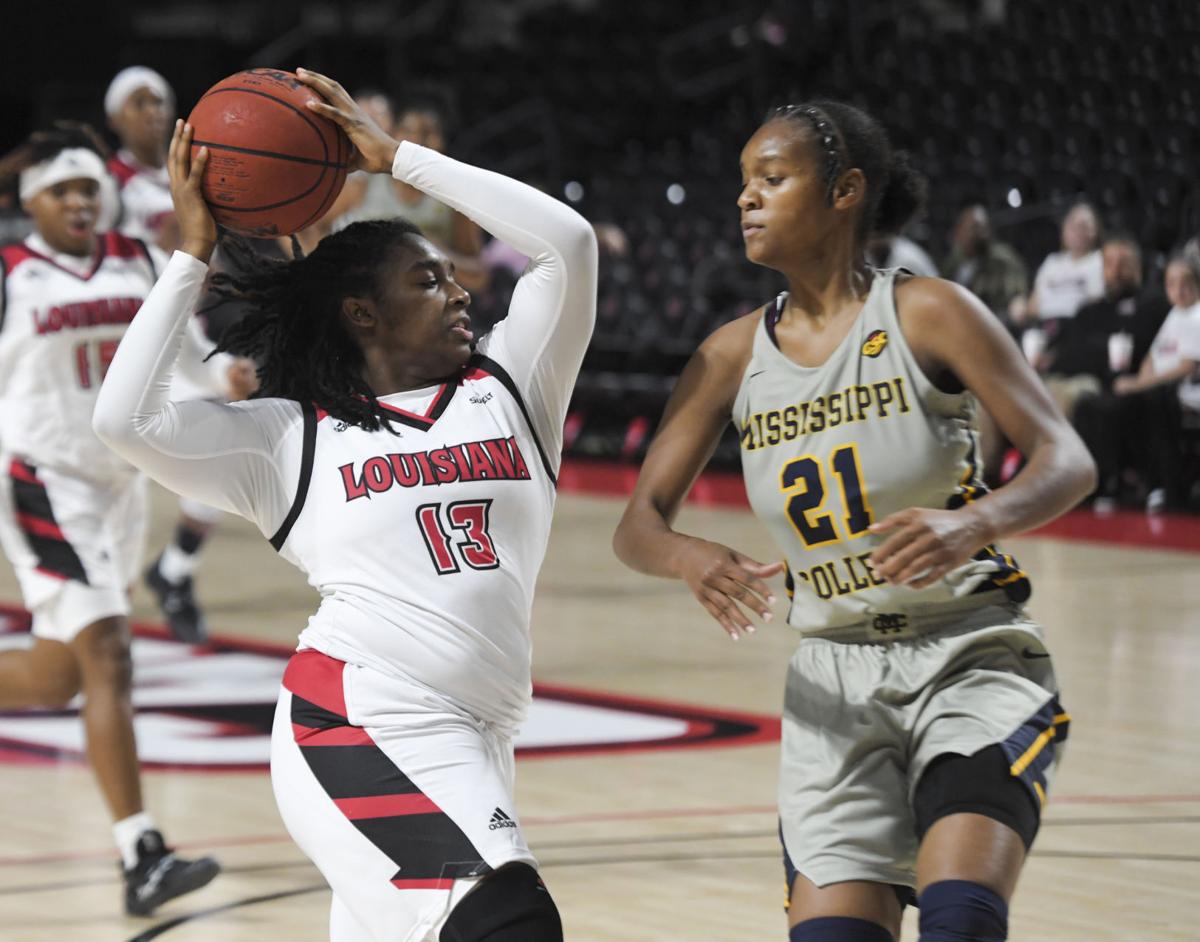 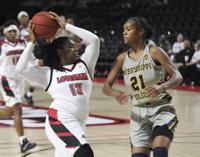 UL guard Jasmine Thomas (13) drives to the basket against Mississippi College forward Mikeba Jones (21) during the Cajuns' 73-65 exhibition win Monday in the Cajundome. 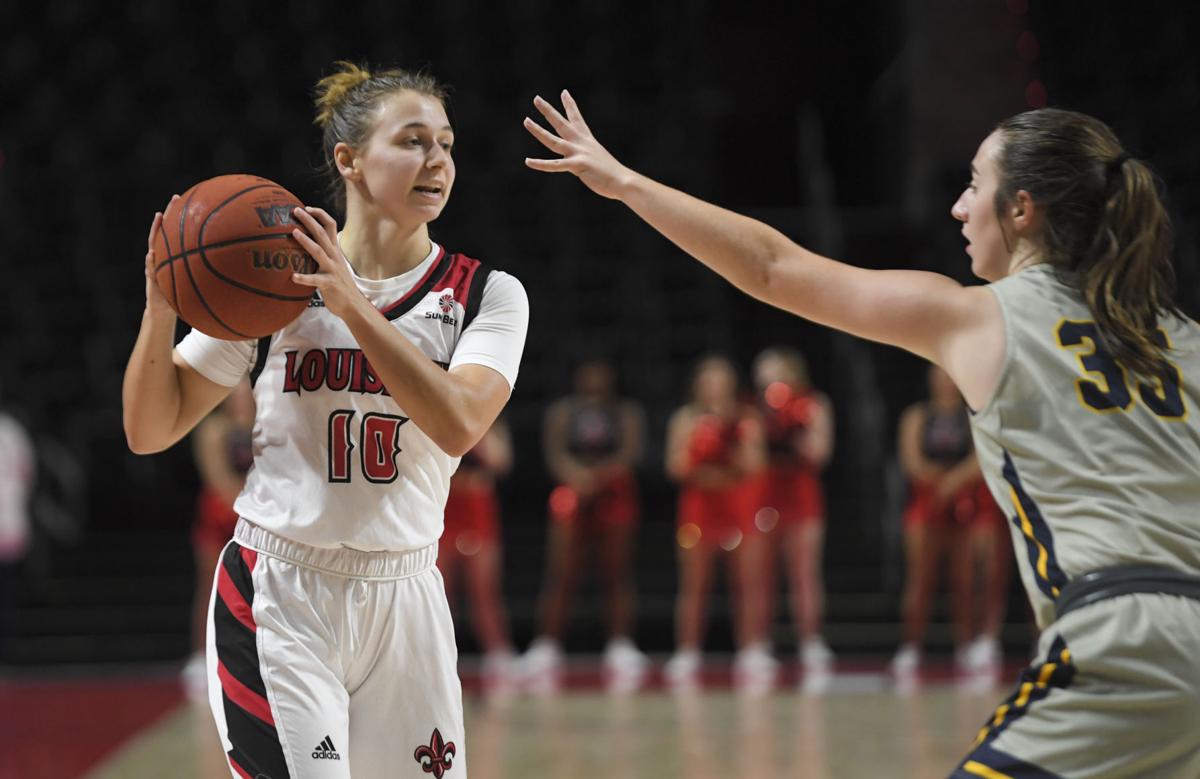 UL guard Andrea Cournoyer (10) looks for a hole in the Mississippi College defense during his 19-point performance in Monday's exhibition game.

UL guard Jasmine Thomas (13) drives to the basket against Mississippi College forward Mikeba Jones (21) during the Cajuns' 73-65 exhibition win Monday in the Cajundome.

UL guard Andrea Cournoyer (10) looks for a hole in the Mississippi College defense during his 19-point performance in Monday's exhibition game.

It was exactly what UL coach Garry Brodhead wanted and needed to hear.

For the first time in recent memory, could his Ragin’ Cajuns’ women’s basketball team actually start a season healthy?

The concept sounded like music to his ears when he was told last Monday the team’s injury list was empty.

A week later, however, it all proved to be one giant tease when the Cajuns played without four regular contributors in their 73-65 exhibition game victory over Mississippi College at the Cajundome.

“Very much so,” Brodhead said. “The last meeting we had last Monday, everybody was in. It was very exciting. I was like, ‘Whoa.’ That felt really good and by the end of the week, we were missing four people.”

Naturally, missing that many key figures thwarted the progress an exhibition game could provide.

UL women's basketball counting on being much more aggressive, improved this season

The 2018-19 UL women’s basketball season wasn’t fun for anyone involved.

“I think so, because you didn’t have everybody to play to where we’d get some chemistry,” said Brodhead, who said the plan is for all four to be back within two weeks. “I know we played in Cuba this summer, but we hadn’t played in a couple of months. I thought it would be a big thing if we had everybody together.

“With Ty (Doucet), I just felt like we would have had a better inside game, even though we did score 32 points in the paint.”

The good news on the injury front is point guard Jasmine Thomas is back, scoring seven points with four rebounds and four assists in 25 minutes Monday. The bad news is she's not in game shape just yet.

"She can play now," Brodhead said of Thomas. "If we can get her in shape, she could really play. Most of her mistakes were when she was tired. A way to get her in shape is to play her."

In the absence of a handful of stars, it was sophomore guard Andrea Cournoyer that stepped up with a team-high 19 points with four steals and two assists.

“So far, everybody’s been doing really well,” Cournoyer said. “Last year was harder because we had a lot of injuries, so the freshmen had to just step up and play. Now they have older players that they can look up to. We’re adjusting really well, and we’re playing well together.

“I think I have more confidence. Last year, I was still learning. Now I know how our coaches want to run things. Now that I have experience, I’m must ready to play and I know where I’m supposed to be and what I’m supposed to do.”

Brodhead said he sees Cournoyer making better decisions on when to shoot and how to execute her defensive duties.

“I’ve been putting in a lot of work, and that’s one of the things I’ve been working on," Cournoyer said of her shooting. "I’m just trying to find where I’m comfortable and take the shots our coaches want.”

Sophomore guard Diamond Morrison displayed progress from the perimeter in the second half, finishing with 15 points, three assists and two steals.

(Editor's Note: By all standards, the 2018-19 athletic school year was a disappointing one for many UL programs. This is the second of a 10-pa…

The return of Kimberly Burton after missing a season was encouraging as well with seven points and eight rebounds. If she can improved on finishing and consistently making putbacks, it would aid the Cajuns offensively.

“The thing is she’s working on that,” Brodhead said. “She’s putting in a lot of time and I always have confidence when I see a kid in the gym working on it. She hasn’t played in over a year.”

The other big concern for Brodhead is rebounding — with both teams finishing with 34 boards and the Choctaws getting 14 second-chance points.

“Defensively, we’ve got to make sure that we continue to improve and rebounding,” he said. “We were even on rebounds tonight. For us to guard for 20 to 25 seconds and give up seven offensive rebounds for 14 points, that really hurts. We’ve got to get better by finishing the stop by getting rebounds.”