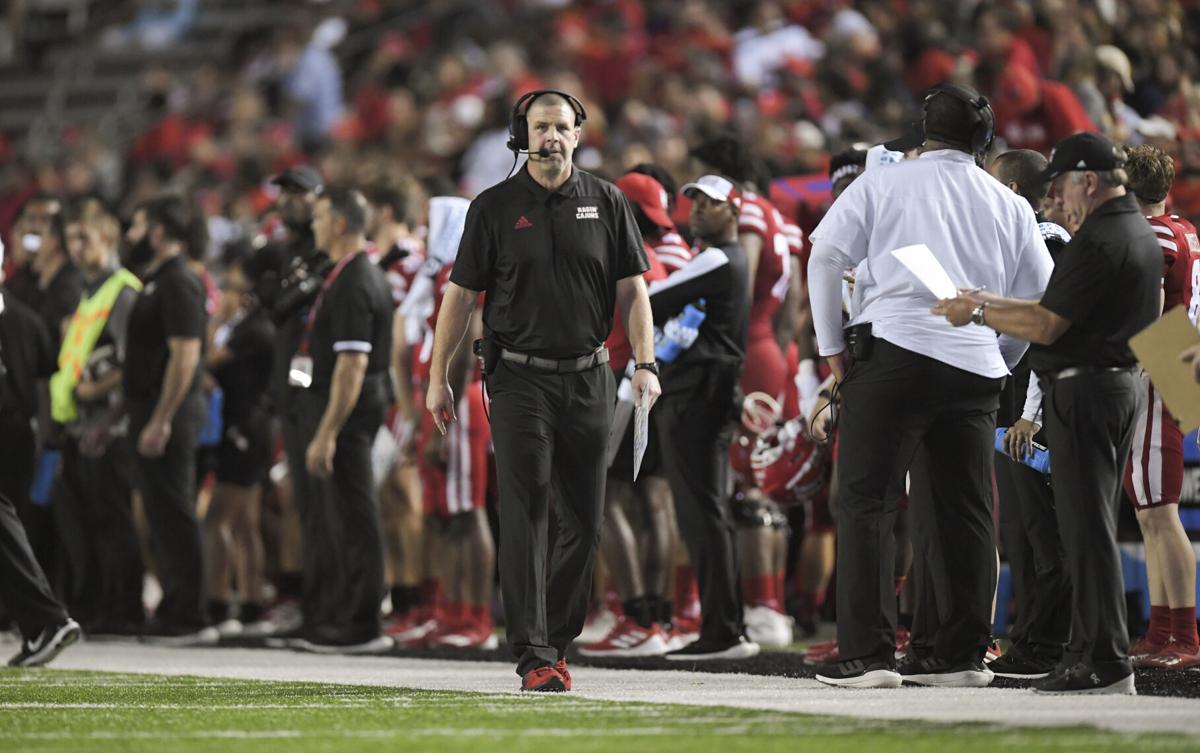 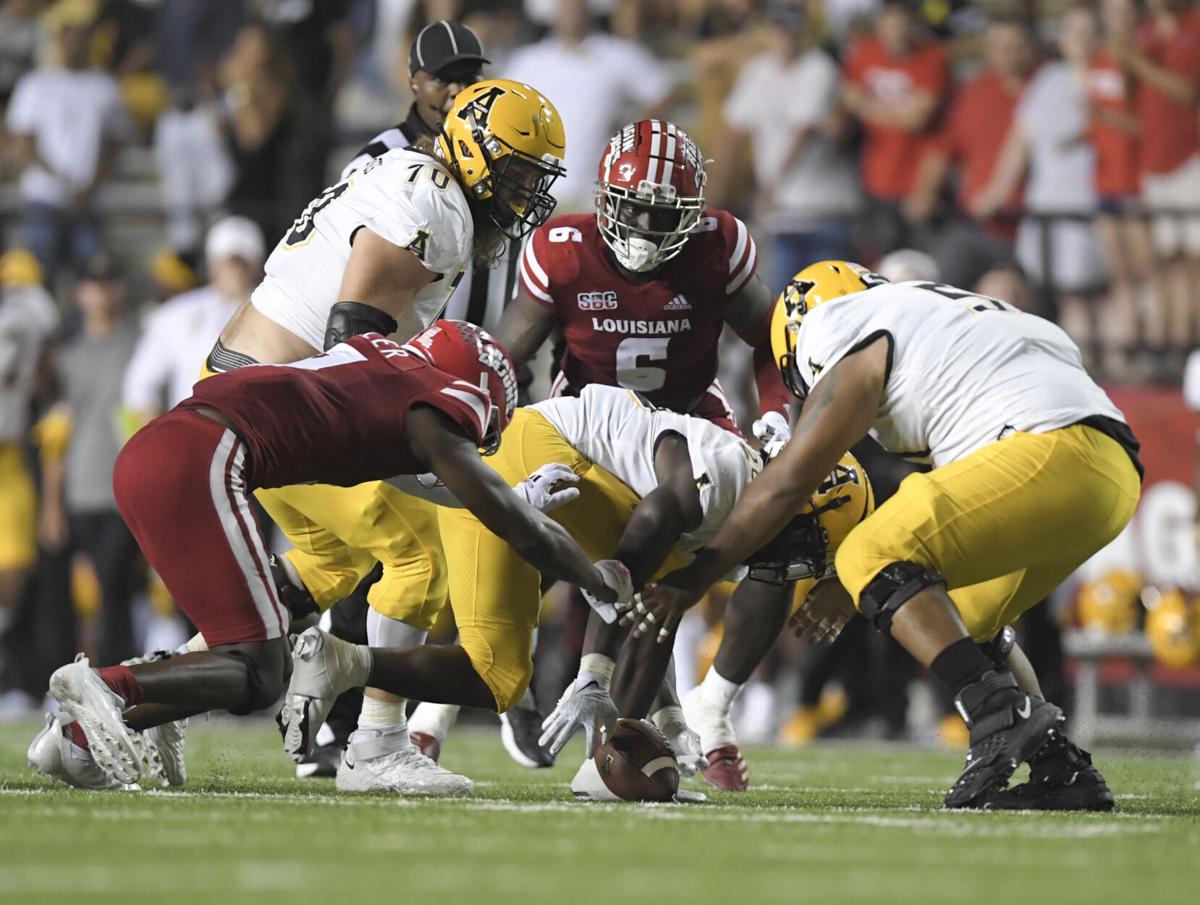 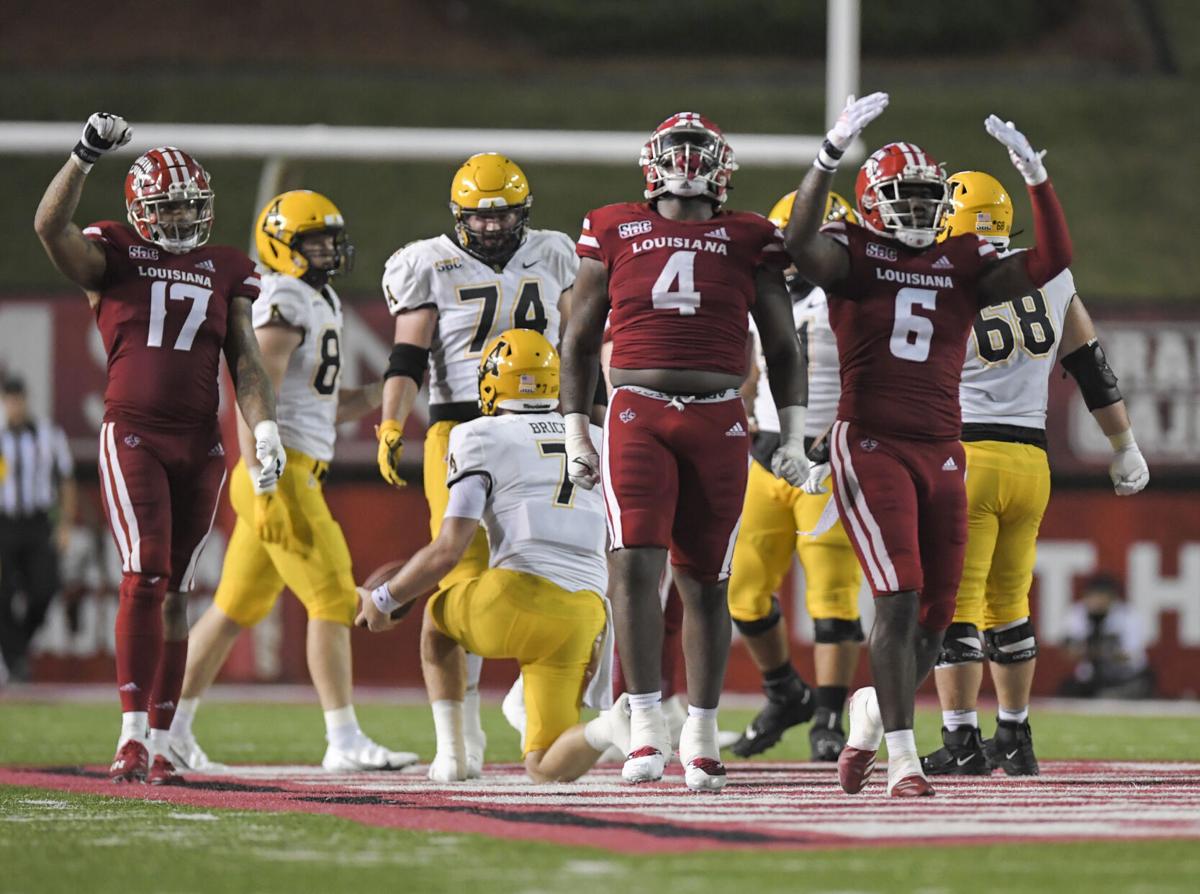 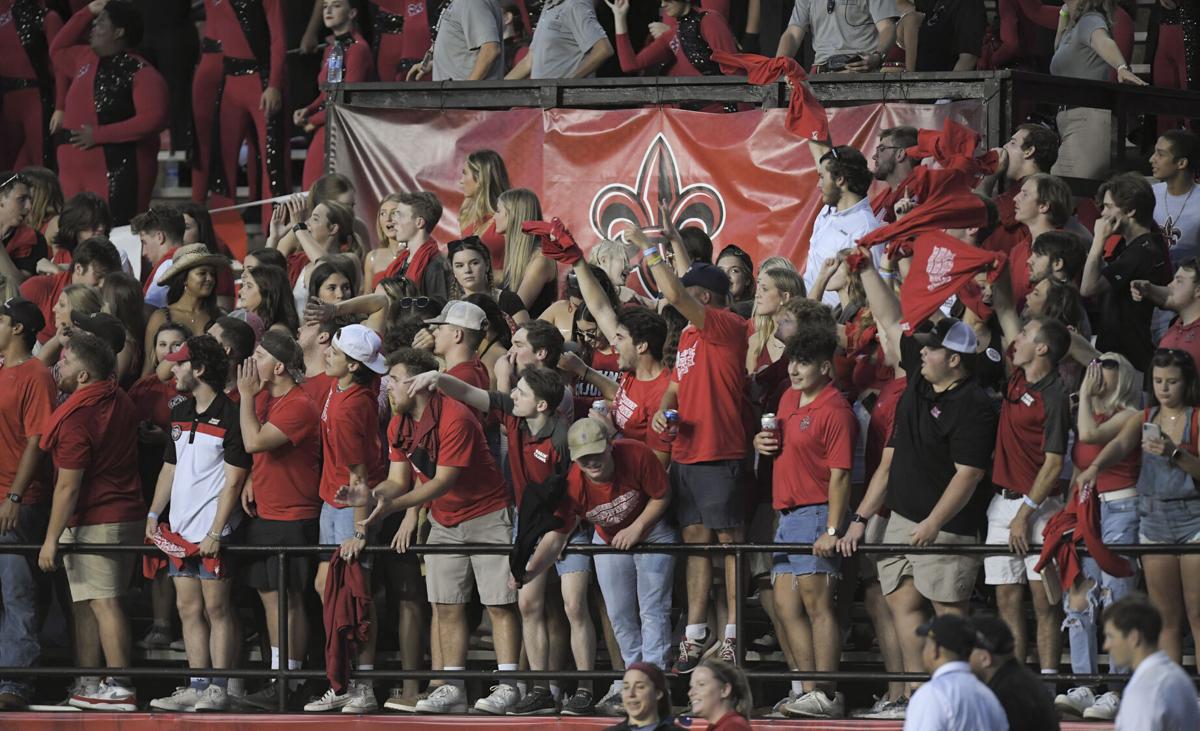 The UL student section cheers for the rain Cajuns against App State during their Sun Belt Conference game at Cajun Field on Tuesday, October 12, 2021 in Lafayette, La.. 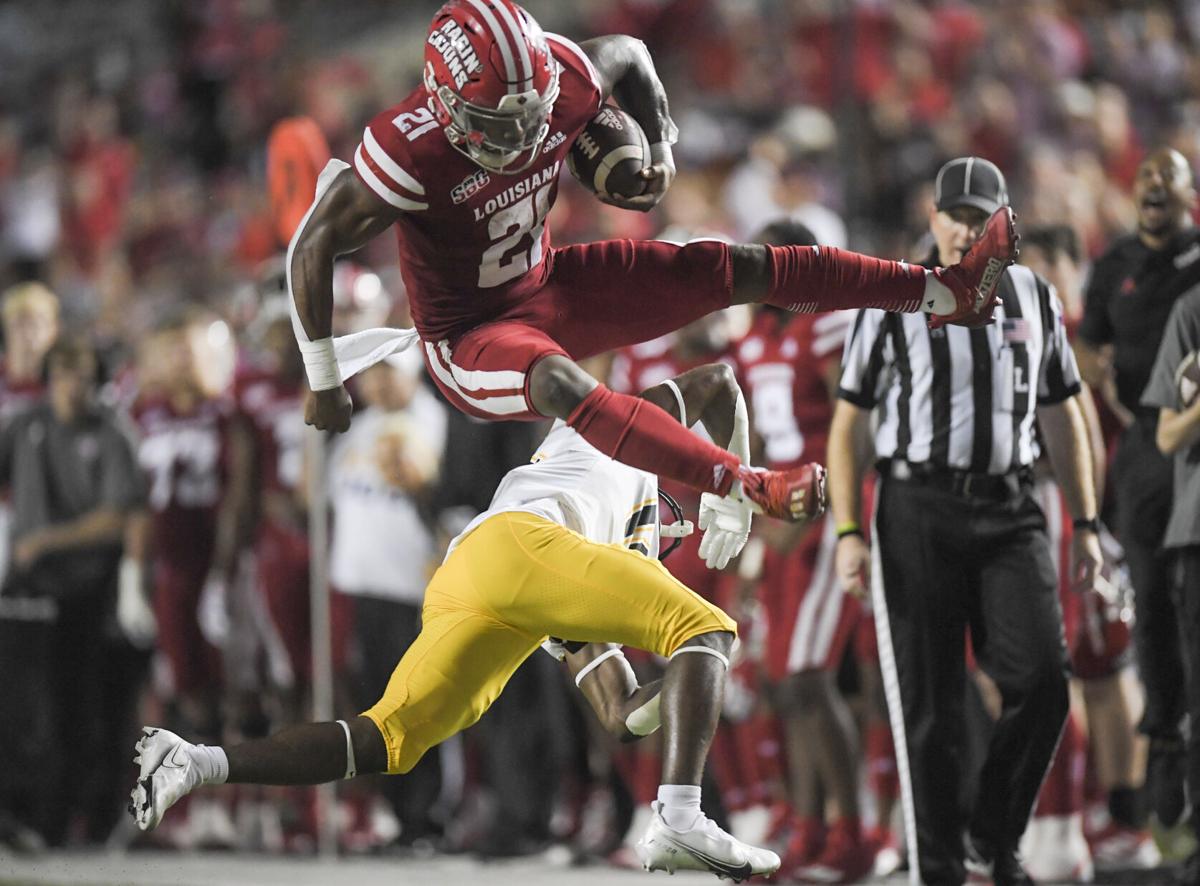 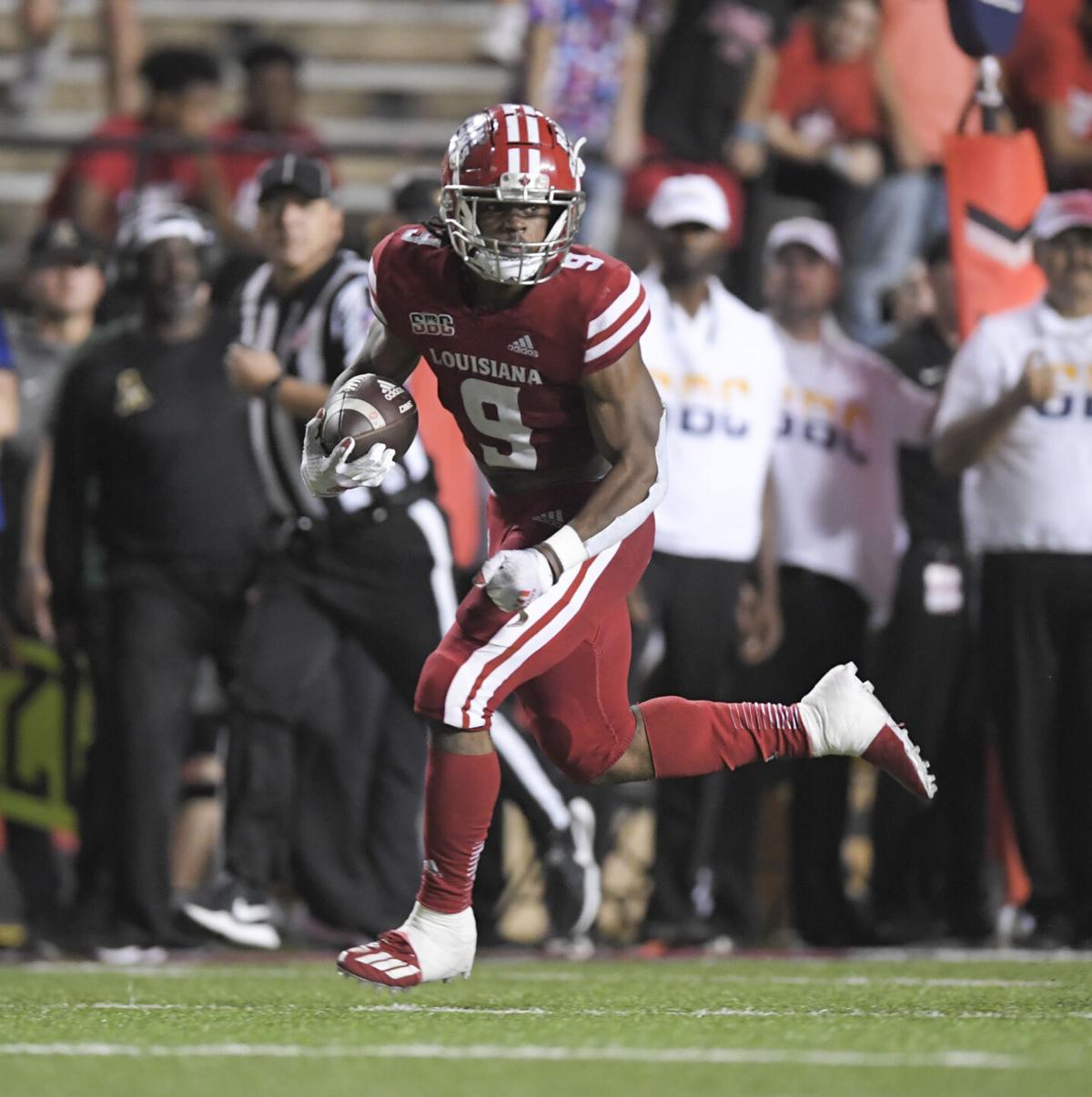 UL running back Emani Bailey (9) runs in for a touchdown against App State during their Sun Belt Conference game at Cajun Field on Tuesday, October 12, 2021 in Lafayette, La.. 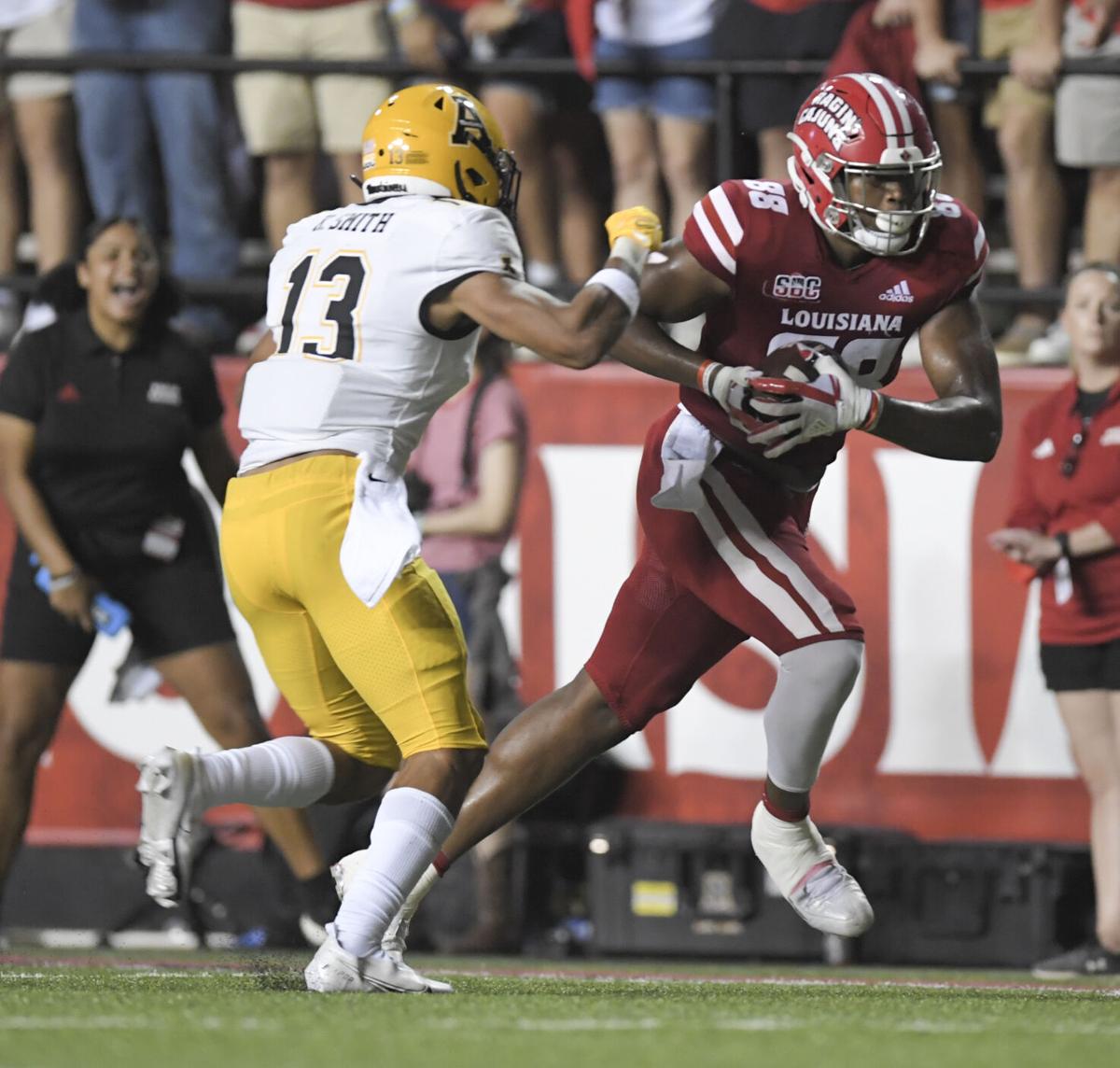 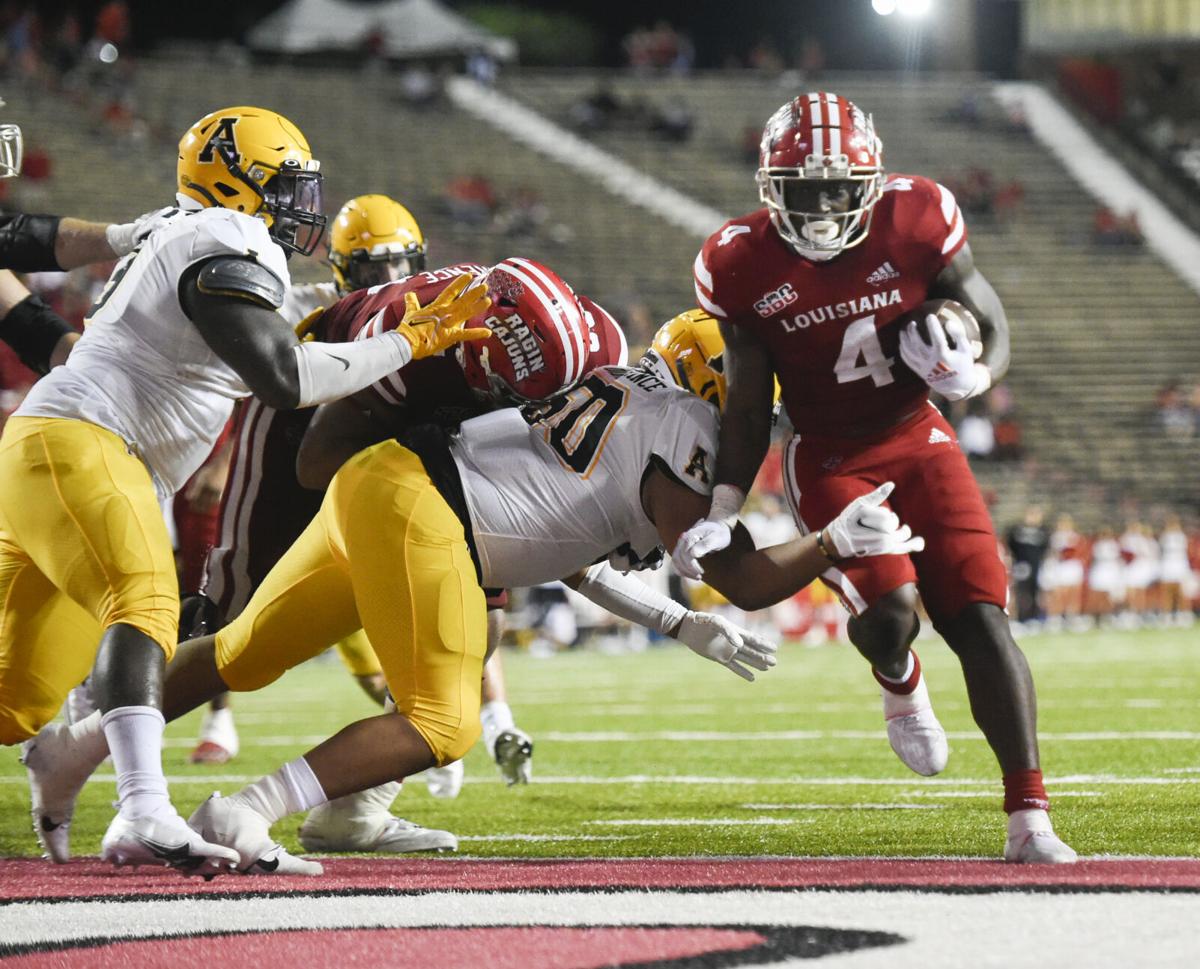 UL running back Montrell Johnson (4) crosses the goal line for a touchdown against App State during their Sun Belt Conference game at Cajun Field on Tuesday, October 12, 2021 in Lafayette, La.. 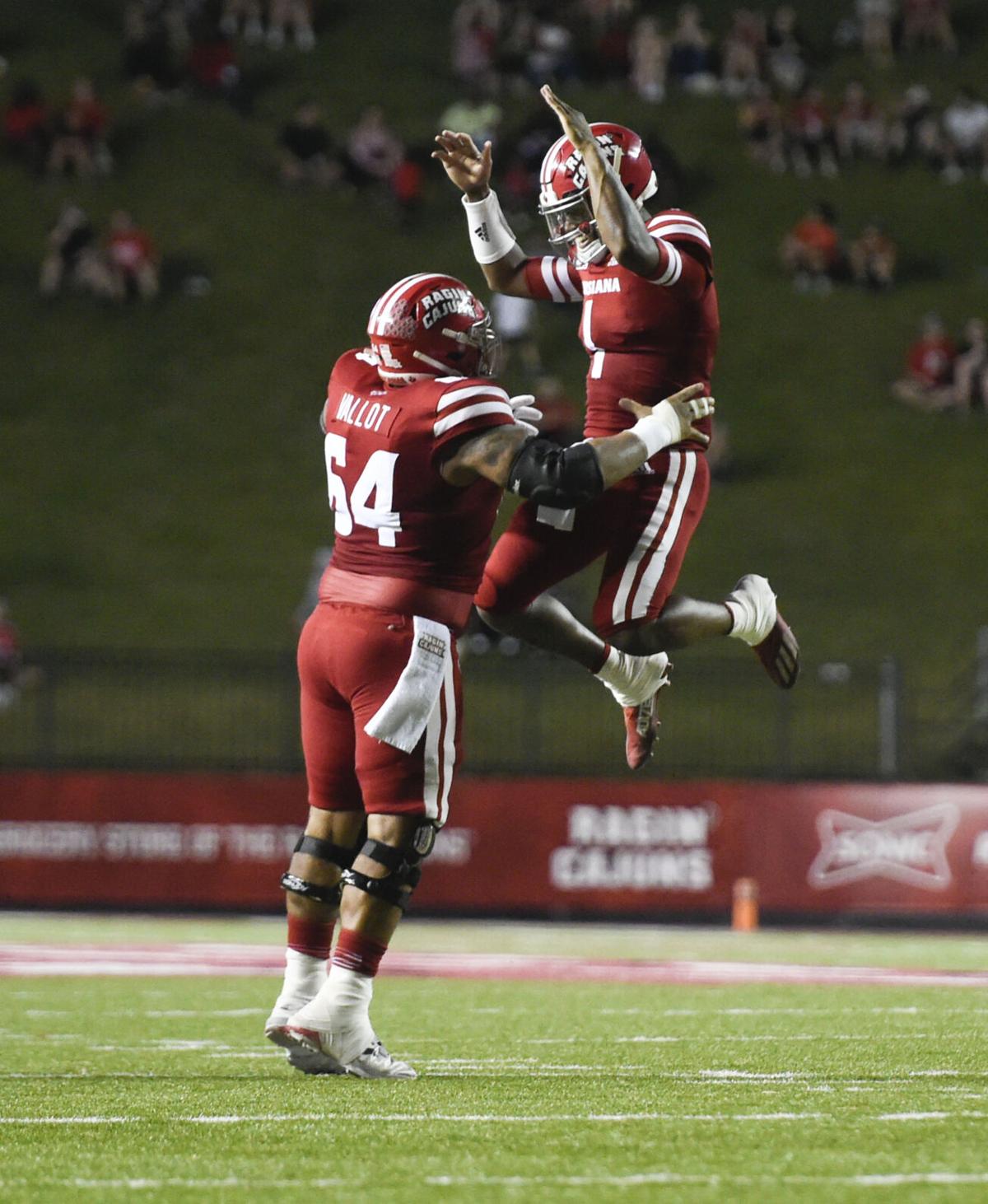 The UL student section cheers for the rain Cajuns against App State during their Sun Belt Conference game at Cajun Field on Tuesday, October 12, 2021 in Lafayette, La..

UL running back Emani Bailey (9) runs in for a touchdown against App State during their Sun Belt Conference game at Cajun Field on Tuesday, October 12, 2021 in Lafayette, La..

UL running back Montrell Johnson (4) crosses the goal line for a touchdown against App State during their Sun Belt Conference game at Cajun Field on Tuesday, October 12, 2021 in Lafayette, La..

Napier was asked if Tuesday’s 41-13 demolition of Appalachian State was the Cajuns best performance since he took over the program in 2018.

That's what a coach is supposed to say.

But as sports writers, we can go out on a limb and make the statement: That was the best performance of the Billy Napier era at UL.

In terms of play-by-play execution, it wasn’t as close to total perfection as the 48-7 road shellacking of Coastal Carolina two years ago. However, that Coastal team had a losing season that year and hadn’t ascended to the top of the Sun Belt Conference just yet.

Handling Appalachian State on national television is a completely different story. App State is the dragon the Cajuns have been trying for years to slay.

UL finally beat the Mountaineers last season after eight straight losses. Somehow, it was important to ‘prove it’ with a second straight win this week.

Much of the offense’s emphasis during the offseason was improving on the unit’s deep passing game.

“I feel like this one is more important than the one last year,” Butler said. “They’re looking at it like, ‘Oh, they beat us one time out of all the times we’ve played them.’ So they’re looking at it like it’s a fluke. We’re just humble and we’re about to show them that it wasn’t a fluke. We’re about to show them, ‘Yeah, we’re really fixing to start running this conference.’ ”

A close win Tuesday would have done it, but a four-touchdown beatdown hammered home the message loud and clear.

“Everybody thought it was a fluke,” said UL junior cornerback Eric Garror, who lost two Sun Belt title games to the Mountaineers. “We had to come out and put it in their head that it wasn’t a fluke and that we’re the team that we say we are.

“It means a lot with what we’ve been through with them.”

Indeed, UL didn’t just defeat Appalachian State on Tuesday. The Cajuns handed the Mountaineers their worst ever loss in Sun Belt Conference play going back to their second league — a 47-21 loss to South Alabama on Oct. 4, 2014.

Foote: Tuesday's Appalachian State game much bigger than the standings for Cajuns

It’s not really a do-or-die game.

The Cajuns didn’t just win the game, they limited Appalachian State’s explosive offense to 211 total yards and 0-of-11 third down conversions.

The Cajuns didn’t just move to 3-0 in league play, they did it with a clinic-like performance that will be the standard for years to come.

The team that showed up Tuesday was the team many expected to see from the beginning of the season.

Napier suggested the extra days to prepare for a Tuesday game helped, allowing the staff to do a deep self-scout.

Foote: So much about this Cajuns team just doesn't add up

The UL Ragin’ Cajuns are 2-0 in Sun Belt Conference play with two road wins, but that only begins to tell the story.

Not satisfied with UL’s level of play, Napier told his staff to “evaluate everything we were doing, what the issues were and what we needed to do to correct that” before actually preparing for Appalachian State.

“We kind of treated it like an open date for two days, we’re a very inconsistent football team — I’m talking to myself here — We’ve got to do something to right the ship,” Napier said.

That was step one. Step two was realizing how good Appalachian State was.

So often in sports, when a team beats a rival, the fans begin yelling, "Overrated."

That’s not the case in this rivalry. The memories of past losses are vivid. The respect is genuine.

And that made Tuesday’s blowout win even more special.

“Then immediately once you started prep for App and turned on the tape on, the film got the attention of the players,” Napier explained. “‘Hey, hold on here. This is a little different animal.’ We’ve got to get ready to go. We cannot play the way we’ve been playing or we’ll get embarrassed.”

Instead, the Cajuns put together a performance better than even the most optimistic UL fan could have expected.

“It’s really been the team that we’ve been trying to chase down,” Napier said. “It all adds up. There’s a lot of work went into putting our team in position to play like that.”

The funny thing about big wins in October, however, is the work isn’t done. After two seasons of aspiring to a performance like his Cajuns delivered on Tuesday, suddenly Napier realized another challenge stands before his team.

“Now we’ve got to go see if we can do it again,” he added. “I think there’s a whole new set of problems that come with playing that well.”

And one overwhelming feeling of accomplishment.

Coach Billy Napier said the film backed up the first impressions of UL's 41-13 triumph over Appalachian State on Tuesday.