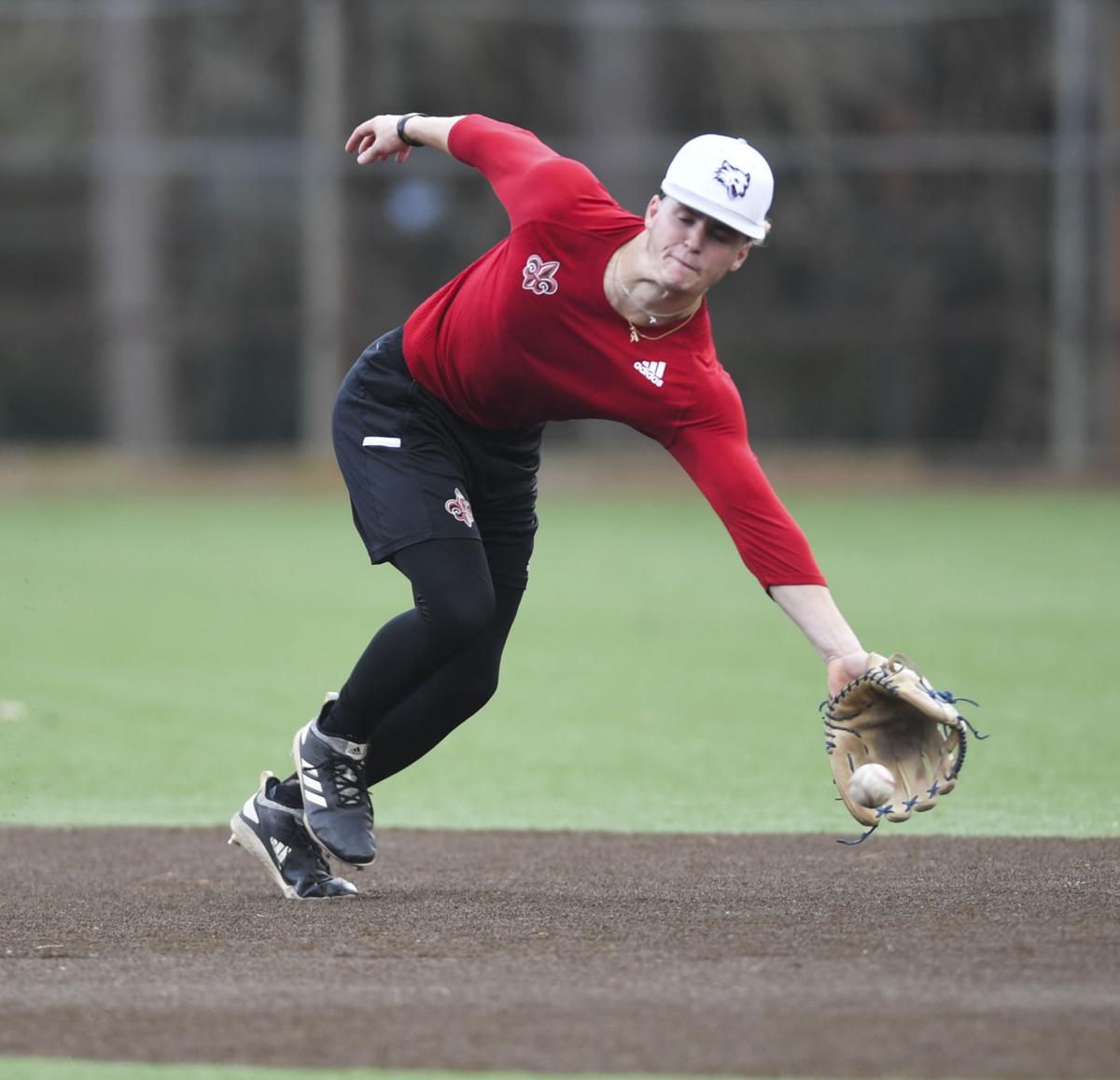 UL shortstop Hayden Cantrelle is the leader of the Cajuns' infield that figures to be especially deep this spring. 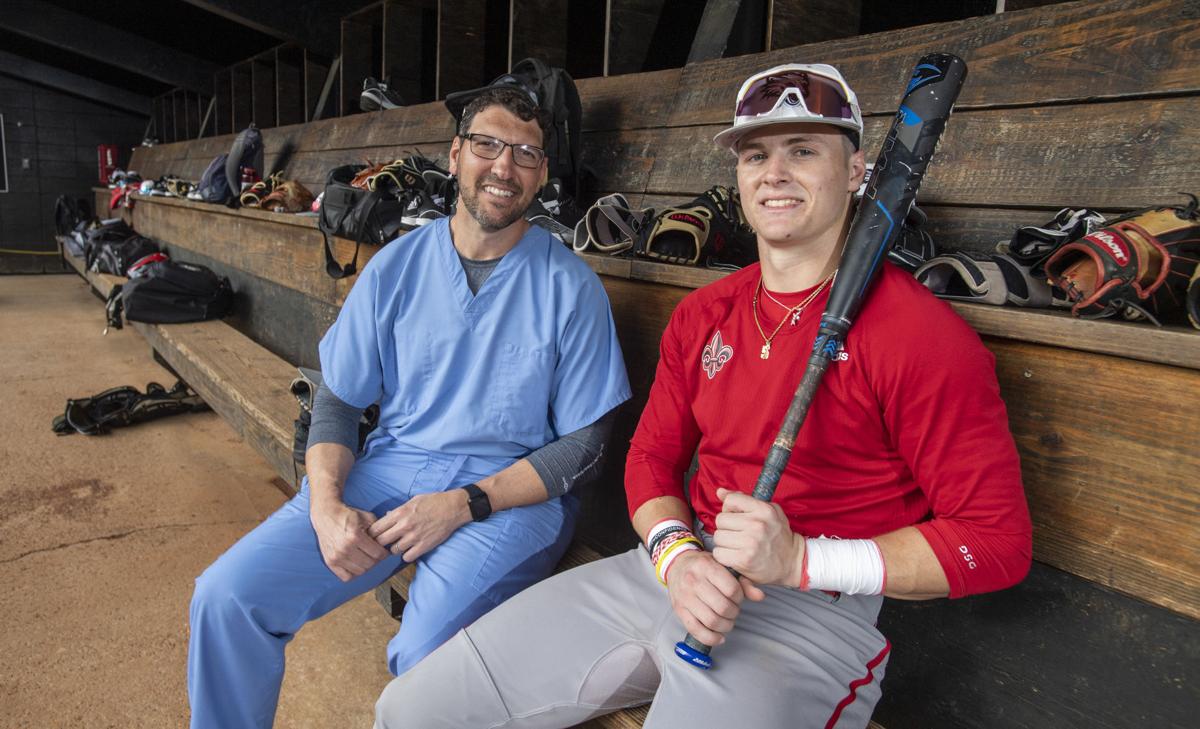 UL shortstop Hayden Cantrelle, right, and his father Kevin, left, sit for a photo in the dugout at Tigue Moore Field this week. Both wore No. 5 for the Cajuns and both played for coach Tony Robichaux.

UL shortstop Hayden Cantrelle is the leader of the Cajuns' infield that figures to be especially deep this spring.

UL shortstop Hayden Cantrelle, right, and his father Kevin, left, sit for a photo in the dugout at Tigue Moore Field this week. Both wore No. 5 for the Cajuns and both played for coach Tony Robichaux.

The Ragin’ Cajuns baseball coach doesn’t need many words to express what he thinks of his talented junior shortstop.

But the first-year UL coach, one who took over the program in the most trying of times, might not know exactly how special, how tied to the Cajuns program Cantrelle really is. That Cantrelle had a little-known bond with late UL coach Tony Robichaux. That, that bond was there even before he showed up as a 5-year-old at Robichaux’s summer father-son baseball camp, dragging his dad and former Cajun standout outfielder Kevin Cantrelle by the arm.

“I remember holding him in the stands, spring of 1999, and (public address announcer) T. D. Smith called me out with other former players there,” the elder Cantrelle said. “I stood up with him in my hands, he wasn’t even 6 months old.”

Not many years later, Hayden was one of the kids running the bases after games at “Tigue” Moore Field, with his father tossing balls to him in the batter’s box.

The elder Cantrelle was also handling analyst duties for UL’s televised baseball games at the time, a role he filled until Hayden’s senior year in high school. In between, Kevin was helping coach Hayden in tournament baseball (he, like Robichaux, abhorred the term “travel ball”).

“To say he grew up around it, that’s probably an understatement,” Kevin said.

Hayden’s bond with the Cajun program, one his father played in from 1995-98 immediately after uncle Lee Cantrelle played the previous four years, is inexorably tied in with Robichaux, who will be honored in a series of events surrounding UL's opening weekend. Robichaux died last summer from heart failure, sending shockwaves through the program, the university and the Acadiana community.

Even Hayden didn’t know how close his bond with Robichaux really was, until after he’d officially signed with the Cajuns in 2017. His birth in 1999 came well before dad Kevin expected fatherhood, coming only a few months after he’d completed his UL career.

Kevin found out he was a soon-to-be father on a Sunday afternoon upon returning from a three-game Cajuns road trip to UNO. His first phone call was to Robichaux, a call relayed by long-time UL assistant Anthony Babineaux.

“He (Robichaux) was on his way home to Crowley, but he called Bab from his bag phone and told him where he would be waiting for me,” Kevin said. “He and I rode around for two hours that night. I was a kid who didn’t know what to do, but Robe was always like a father to me.”

That Robichaux, who had been on the road with his team and away from his family for three days, would spend another few hours counseling one of his players comes as no surprise to anyone who knew him. But that evening also made Hayden and the young man he became even more special to Robichaux.

Kevin didn’t tell his son that story, about his Sunday night ride with his coach and mentor, until after he’d committed to join the Cajuns following his stellar high school career at nearby Teurlings Catholic. He had many other offers, not to mention professional possibilities when he was drafted by the New York Yankees in the 2017 amateur draft.

“The biggest challenge for him, I think, was whether or not he was making too easy a decision to go to UL,” Kevin said. “He had to sort it out in his mind. He’s always sort of marched to his own drummer, but I felt like he always wanted to play here.

“It was a big deal for me for Hayden to play for Robe, but I think it was a bigger deal for Robe to have Hayden play for him.”

The younger Cantrelle did that very well over the past two seasons, starting all 118 games at shortstop and hitting .287 as a true freshman while showing improvement throughout the season. Last year, he hit .309 to rank third on the squad, while leading the Cajuns and the Sun Belt Conference in stolen bases. Along with his hitting, his defense was solid enough that he was invited to play in the prestigious Cape Cod league the past two summers.

It was while he was in Falmouth, Massachusetts, last July 3, preparing for a Fourth of July game with his Falmouth Commodores in the Cape league, that he received word of Robichaux’s untimely passing at age 57.

“It’s still sort of surreal,” Hayden said. “I used to go in Robe’s office before practice, to get organized, but mostly just to talk. It’s still a weird feeling to walk by there.

“But it’s been a bonding experience for us, certainly for the guys that have been here and played for coach Robe, but even guys who didn’t play for him. They knew what he stood for. Coach Deggs, he told us the first day, he was going to hold us to a high standard the same way coach Robe did, he was going to coach with passion like he did. Despite coach Robe’s passing, we’re in great hands.”

Hayden flew home shortly after getting word, but it wasn’t long after that he wanted to get back to the Cape and escape back into baseball.

“He had a really good group of friends the last two summers up in Cape Cod,” Kevin said, “and your buddies help you through a lot of different things. He came down and took some time away, but he was anxious to get back. Baseball has always been an escape for him. I think sports in general are that for a lot of people, and that for him was the best way to honor coach Robe, to go back there and play hard.”

Cantrelle wound up as the Cape’s West Division All-Star shortstop, finishing the summer hitting .315 with 14 RBIs, 21 walks and 19 stolen bases in 36 games.

“He really tried to provide us with some leadership,” Falmouth manager Jeff Trundy said. “That’s the kind of player he is. When you aren’t trying to chase numbers, you’re just worried about trying to help the team win.”

The elder Cantrelle said that Hayden’s ability to handle the summer’s unexpected loss and the turmoil surrounding Robichaux’s death came from previous experience. His mother died when he was 10 years old.

“He got some life experiences early,” Kevin said. “He learned how to deal with a difficult loss in his life at a young age. As much as he was crushed to learn when he was up there that coach had passed, he was able to help others through that when he got back here in the fall.”

Deggs saw that maturity and strength of character quickly, after he was named head coach on July 18 and after Cantrelle returned from Cape Cod.

“It’s meant everything,” Deggs said. “It’s a credit to coach, Hayden and these guys are so far along in their maturity level, it’s like coaching adults. You better be sharp at practice because they’re going to call you on it. I knew how much coach liked and respected Kevin, having played for him, and having Hayden here, it’s been special.”