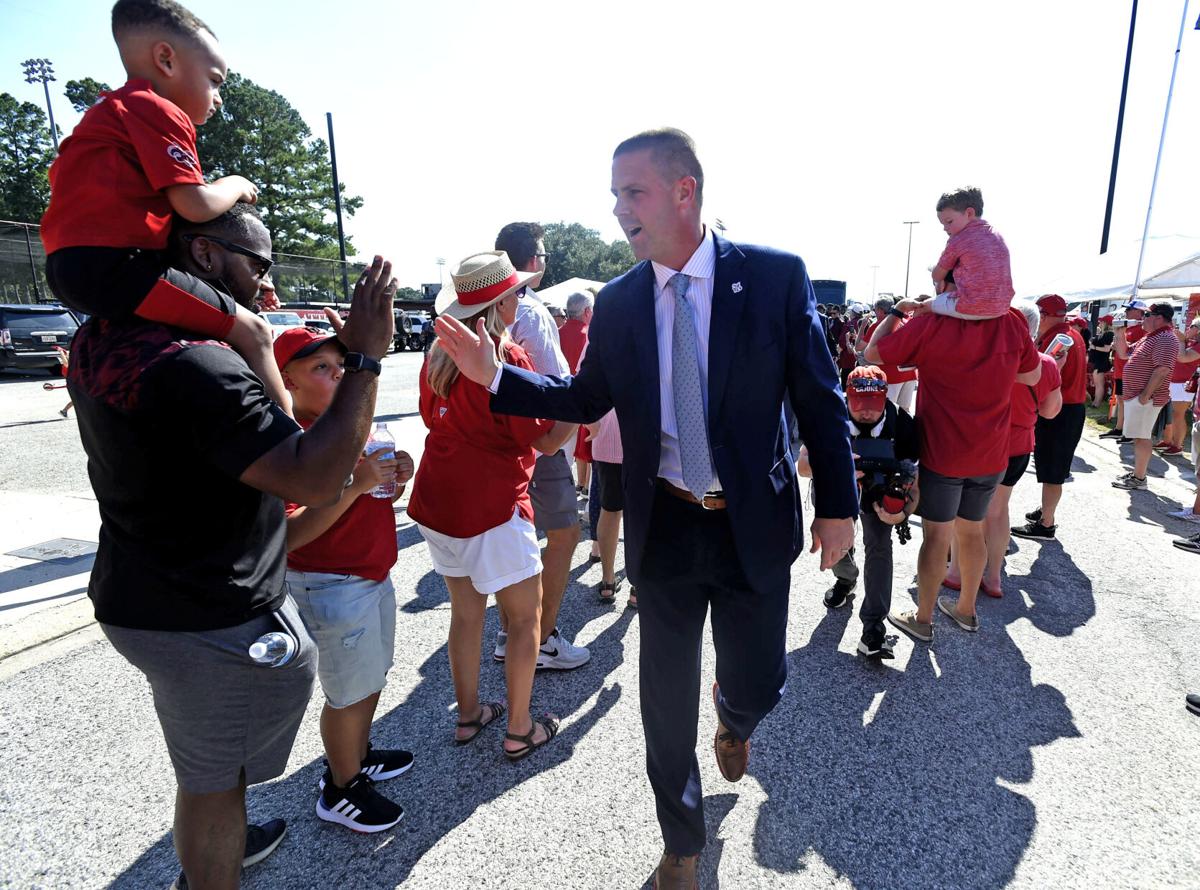 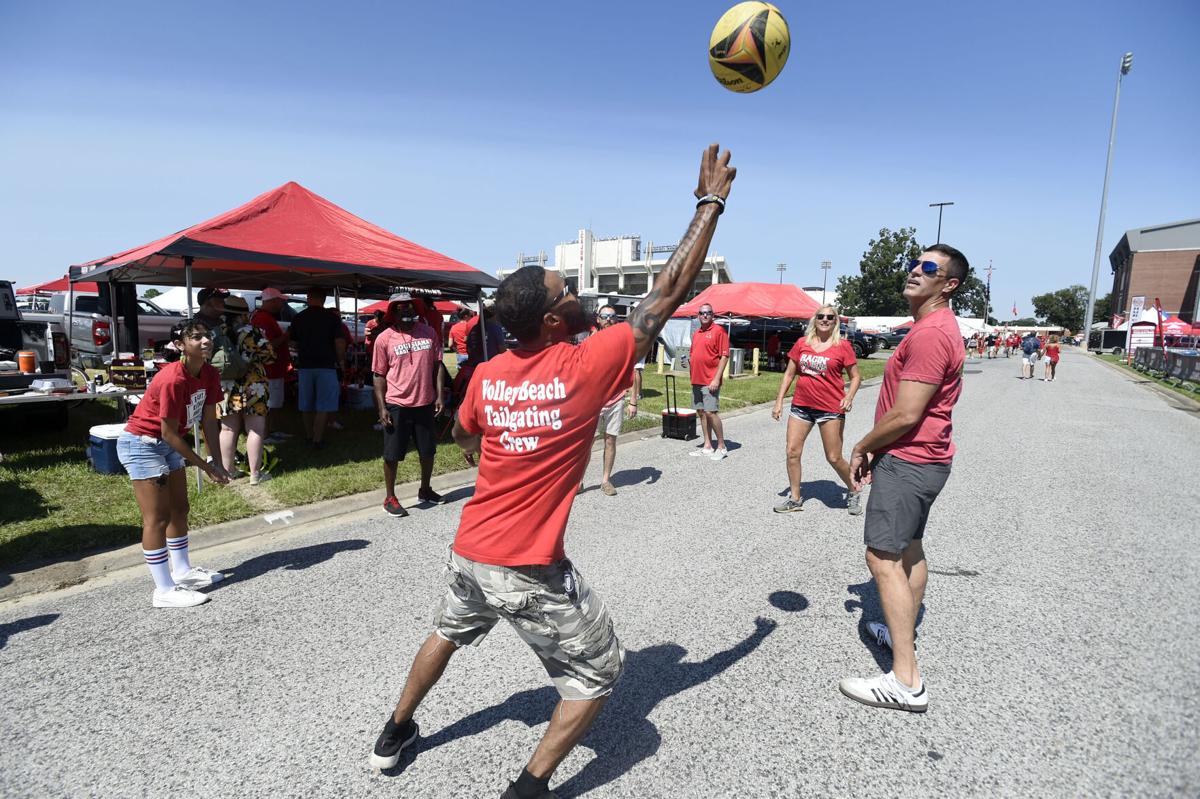 UL football fans volley the ball around at the Volley Beach tailgate tent before the Nicholls State game at Cajun Field on Saturday, September 11, 2021 in Lafayette, La. 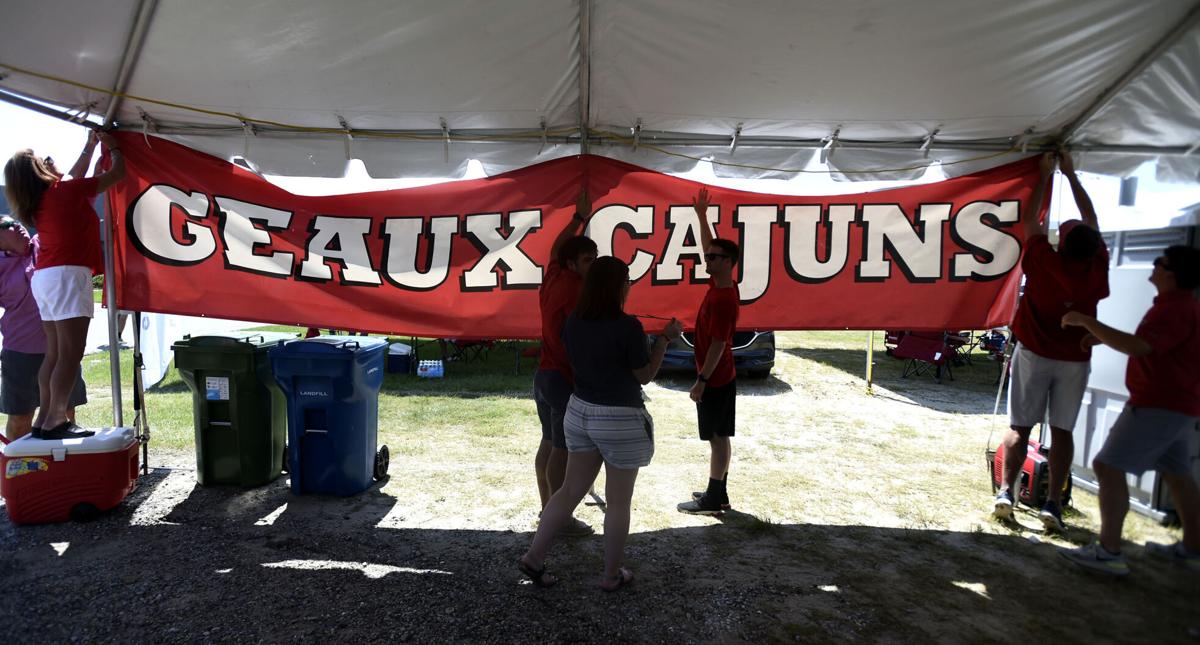 UL football fans put up a big 'Geaux Cajuns' sign under their tailgating tent getting ready for the Nicholls State game at Cajun Field on Saturday, September 11, 2021 in Lafayette, La. 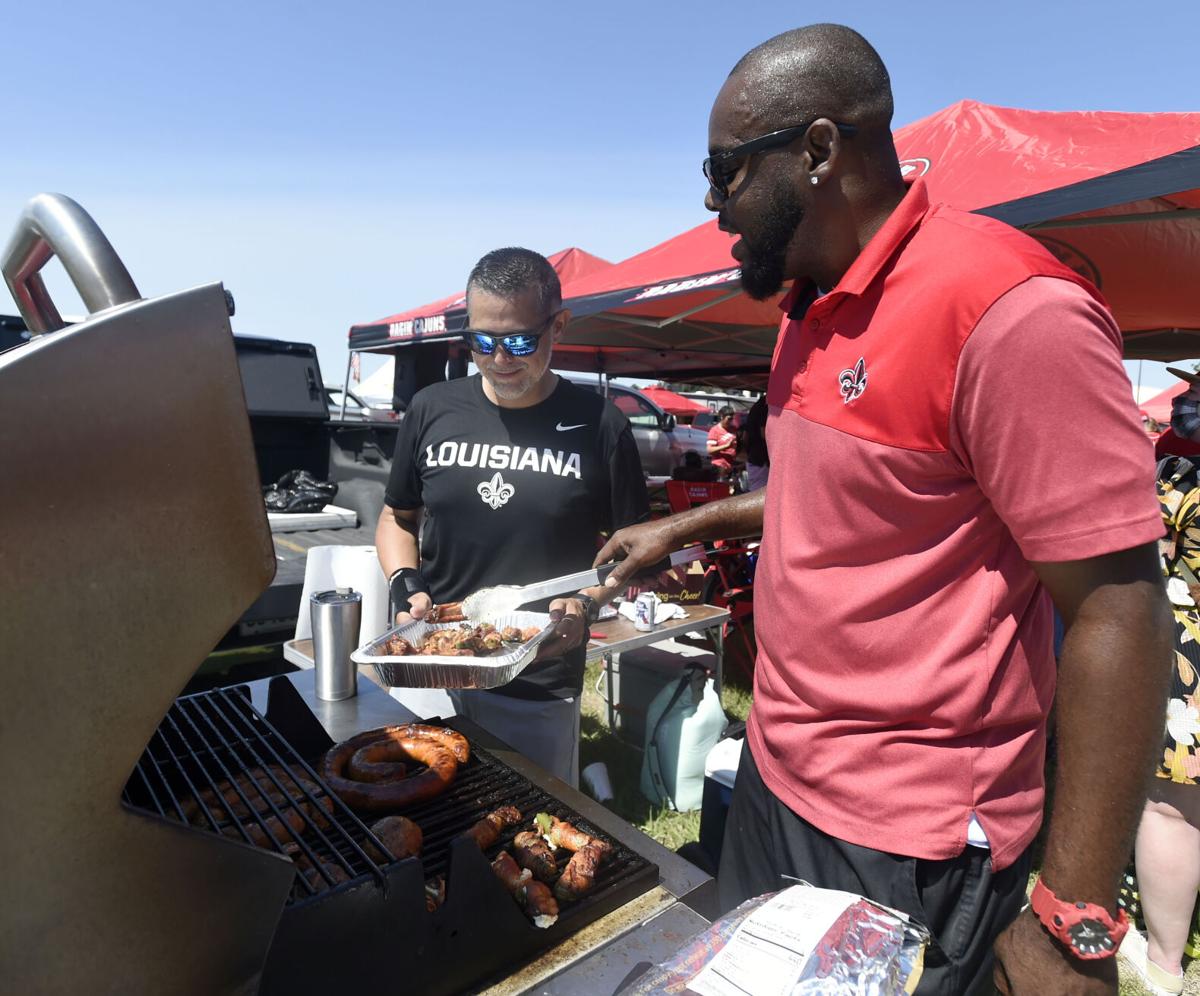 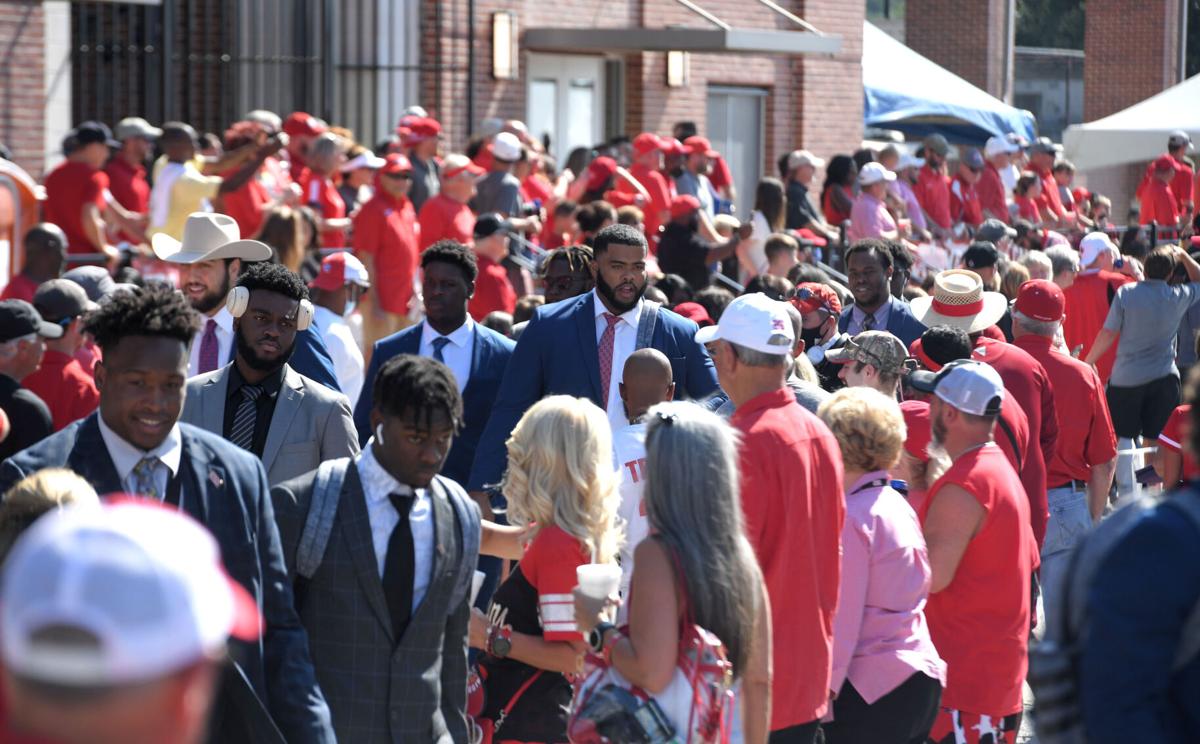 UL football fans greet the team during Cajun Walk before the Nicholls State game at Cajun Field on Saturday. 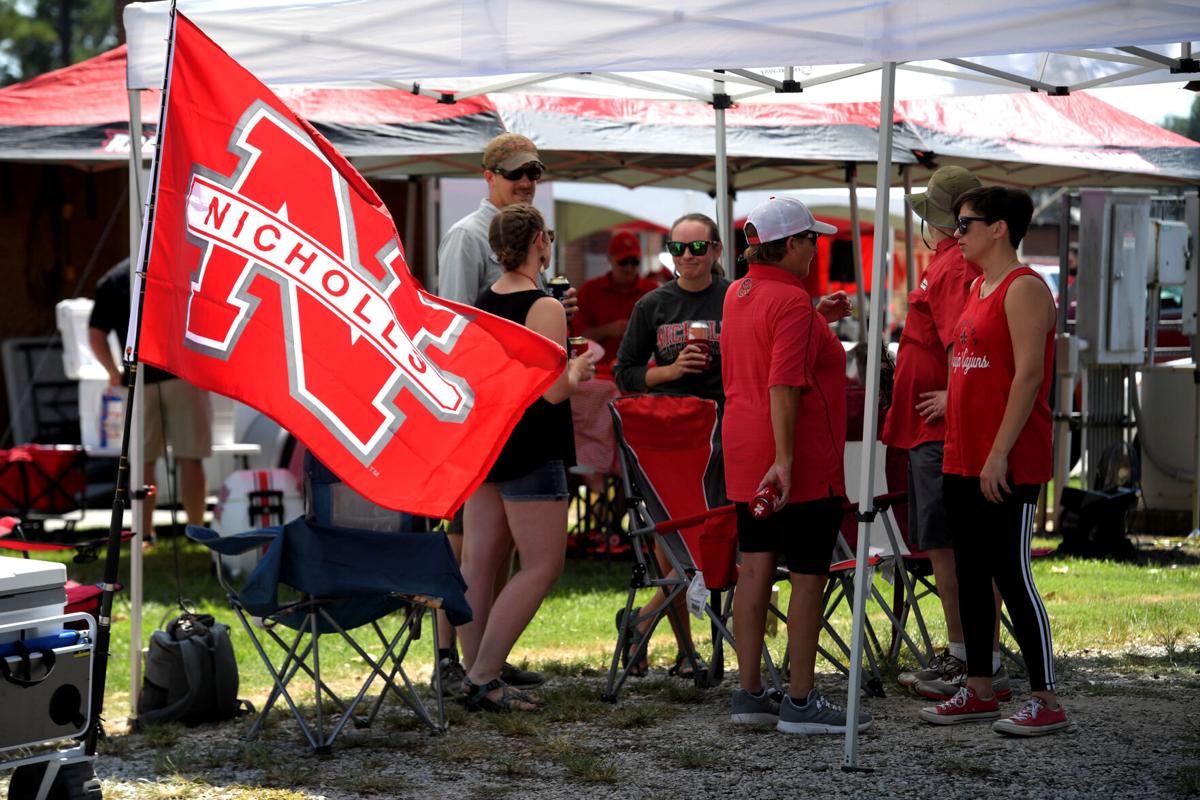 UL and Nicholls State football fans tailgate before their game at Cajun Field on Saturday, September 11, 2021 in Lafayette, La.. 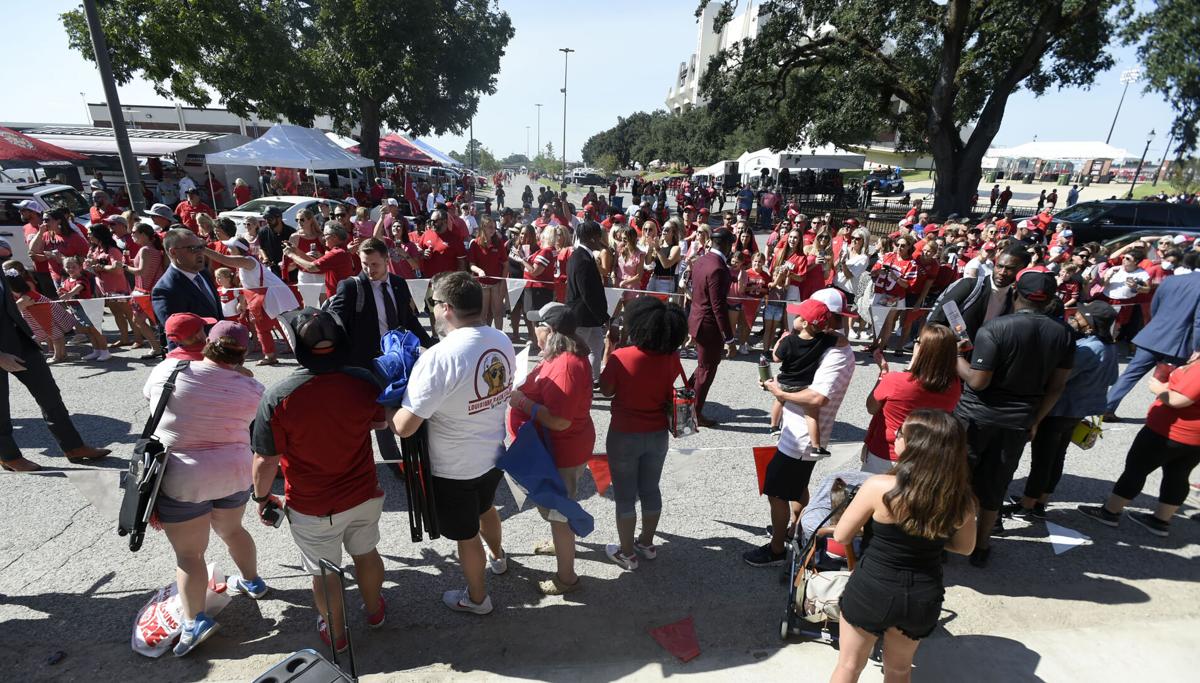 UL football fans greet the team during Cajun Walk before the Nicholls State game at Cajun Field on Saturday, September 11, 2021 in Lafayette, La.. 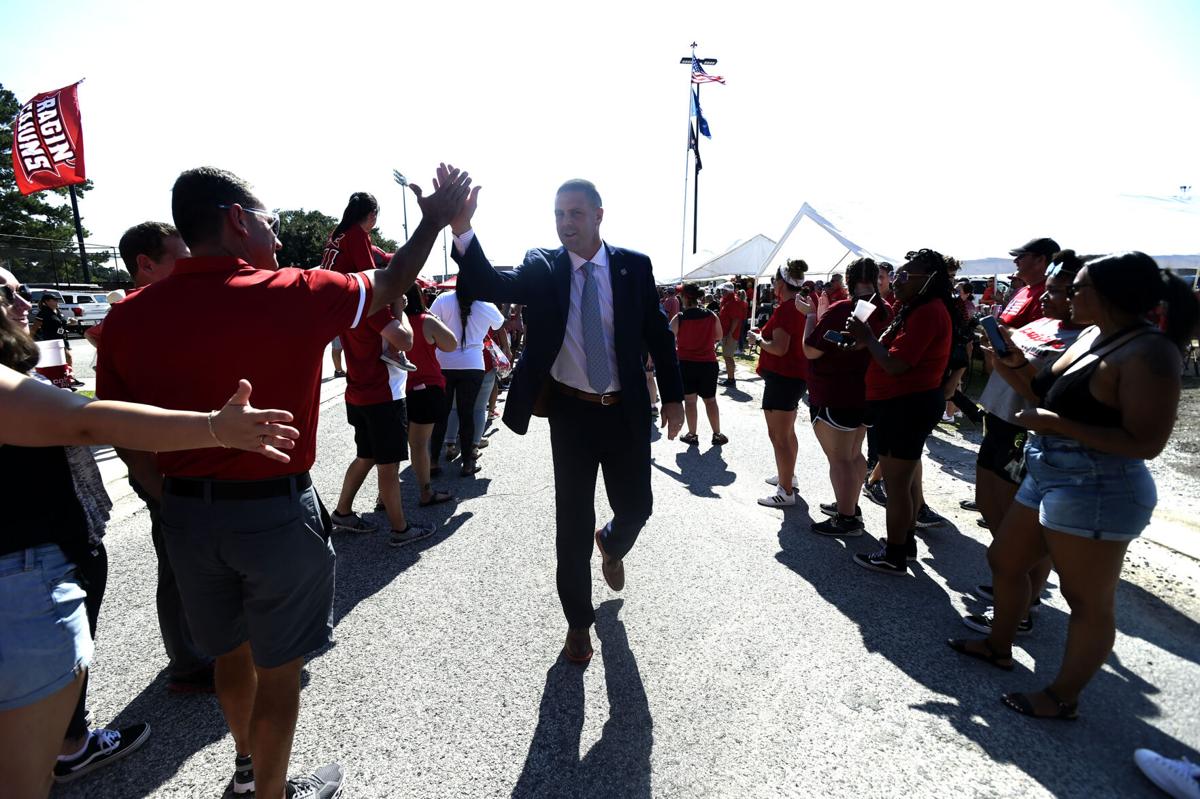 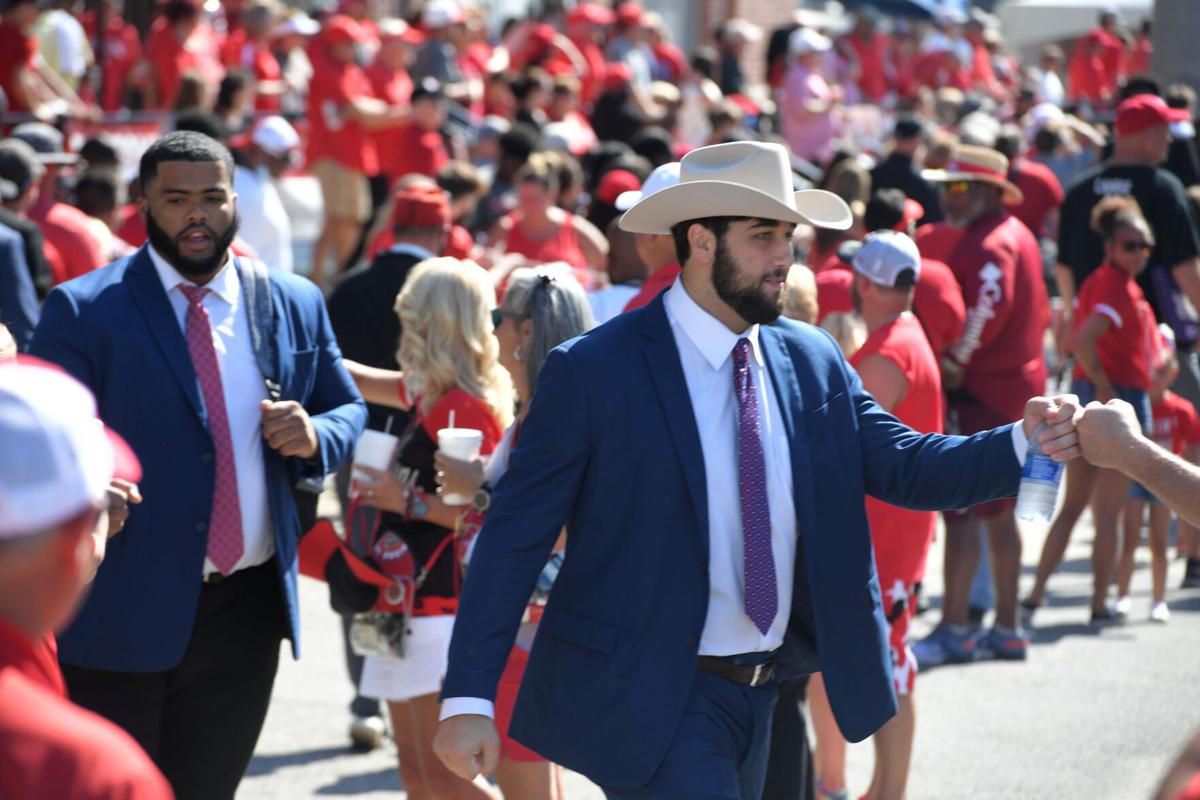 UL football fans volley the ball around at the Volley Beach tailgate tent before the Nicholls State game at Cajun Field on Saturday, September 11, 2021 in Lafayette, La.

UL football fans put up a big 'Geaux Cajuns' sign under their tailgating tent getting ready for the Nicholls State game at Cajun Field on Saturday, September 11, 2021 in Lafayette, La.

UL football fans greet the team during Cajun Walk before the Nicholls State game at Cajun Field on Saturday.

UL and Nicholls State football fans tailgate before their game at Cajun Field on Saturday, September 11, 2021 in Lafayette, La..

UL football fans greet the team during Cajun Walk before the Nicholls State game at Cajun Field on Saturday, September 11, 2021 in Lafayette, La..

A cloudless blue sky and soothing breeze greeted Ragin’ Cajuns football fans who enthusiastically embraced the return of tailgating and fan events Saturday before the Cajuns’ first home game of the 2021-22 season.

In every direction, Vermilion red and white was splashed across fishing shirts, jerseys, bedazzled tees, bows and ball caps as fans gathered under tents with flowing Ragin’ Cajuns flags. The clang of washers hitting game boards and music pumping from speakers filled the air, as smoke from BBQs wafted past.

Kim and Jimmie Conyers were among the excited fans who ventured out to tailgate and celebrate the return of a fully fan-involved season at Cajun Field. The Conyers were season ticket holders for about five years, until they moved to Magnolia, Texas, in December, she said.

Kim Conyers graduated from the University of Louisiana at Lafayette in 2003 with a business degree, but it was a group of friends who got the couple into the tailgating scene several years ago. The 50-year-old said she loves the sense of camaraderie, the friendliness and the hometown feeling that tailgates at Ragin’ Cajuns’ games have.

The couple skipped games last year because of the COVID-19 pandemic out of concern for the health and safety of their immunocompromised grandson, who lives with them. Now vaccinated and with more knowledge about the virus, Kim Conyers said they’re trying to enjoy their pre-pandemic hobbies and outings again.

“We are both vaccinated because we do not want to stay home for the rest of our lives. We do want to go out … but we’re cautious and aware,” she said. “[I’m excited to see] people living their lives. This is who we are and it’s time for people to start living their lives again.”

Kamal Borchalli has been tailgating in the same spot on Reinhardt Drive for more than 30 years, before tailgating at Ragin’ Cajuns games was popular, he said. To him it’s crucial to show up to support the team, the school and the city. Even after driving home from Shreveport at 1 a.m. Saturday following his son Sami's game with the Centenary College of Louisiana’s men’s soccer team, Borchalli was set up and ready to tailgate at 10:30 a.m. — a late start for him.

Cajuns, Colonels focused both on improving and big-picture issues off the field

Both UL’s Billy Napier and Nicholls State's Tim Rebowe understand the importance of family, friends and the most important things in life.

On Saturday, like in years past, his tent was filled with friends and family, most players at the beach volleyball court on Moss Street, Volley Beach. Borchalli said the familiarity of the group, and their already frequent interactions at Volley Beach, made him feel safer about hosting the social gathering. Vaccinated against COVID-19 along with the rest of his family, the longtime Cajuns fan said they were sanitizing what they could and he packed a mask to wear in common areas during the game.

“We try to be smart but you still have to live your life. Everybody’s been looking forward to this day … I’m sure there are people who were shying away from being out here because of COVID concerns but it’s a pretty good crowd,” he said.

Since 11 a.m. Saturday, 42-year-old Charlie Riser faithfully manned a grill smoking with ribs, stuffed jalapeños, wings, boudin and other savory treats with his co-chef Mike Rubio, 42, trying to avoid collisions with friends batting a volleyball beside the grill at Borchalli’s tent.

Riser graduated from UL in 2002 and has been coming to Borchalli’s tailgate for around a dozen years. Born and raised in Lafayette, he said the city is lucky to have a university at its center and he takes pride in showing his support for the school and the team. Even with a more subdued experience last year, he turned out to the home games to back the program.

UL: Students must start vaccination process by Sept. 20 to register for classes

Planning to sign up for winter intersession or spring courses 2022 at the University of Louisiana at Lafayette?

Vaccinated against COVID-19 and ready for the season, Riser said finding the right words to express the anticipation was difficult.

“I can’t explain it. I was so excited for it — none of us could sleep last night. I’m so excited to be back out here after almost two years,” Riser said.

Leah Formby, 44, was excited to share gameday traditions with her children, 4-year-old Jack and 2-year-old Nora. She’s been a Ragin’ Cajuns fan since birth — her parents both graduated from the university — and even leaving the state to attend the University of Alabama on a soccer scholarship didn’t dim her love for the school and the team.

The longtime fan said she took her children to roll down the hill outside Cajun Field, visit the Tony Robichaux memorial and bask in the sounds and smells of tailgating while waiting for the team to appear for the Cajun Walk down Reinhardt Drive.

From the time he graduated from the University of Louisiana at Lafayette in the spring of 2005, former Ragin’ Cajuns three-year starting cente…

“It’s fun. It’s exciting. I love the crowd. I love the energy. I want them to feel that. It’s just the good energy, the positive energy while cheering on our team,” Formby said. “I’m the kind of person that I love being with people. My kids love being around people. We like connection.”

Formby works as a nursing director at a local hospital system. She and her parents, both in their 70s, are fully vaccinated and that, coupled with being outside, made attending feel doable. Formby said her parents had skipped tailgating but were planning to attend the game. It’s about balance and finding a way to keep living, she said.

The game was the first time in over a year she had seen many family members and friends.

“We want to be safe but we still want to enjoy life so whatever measures we can take to be out here — we will,” she said.