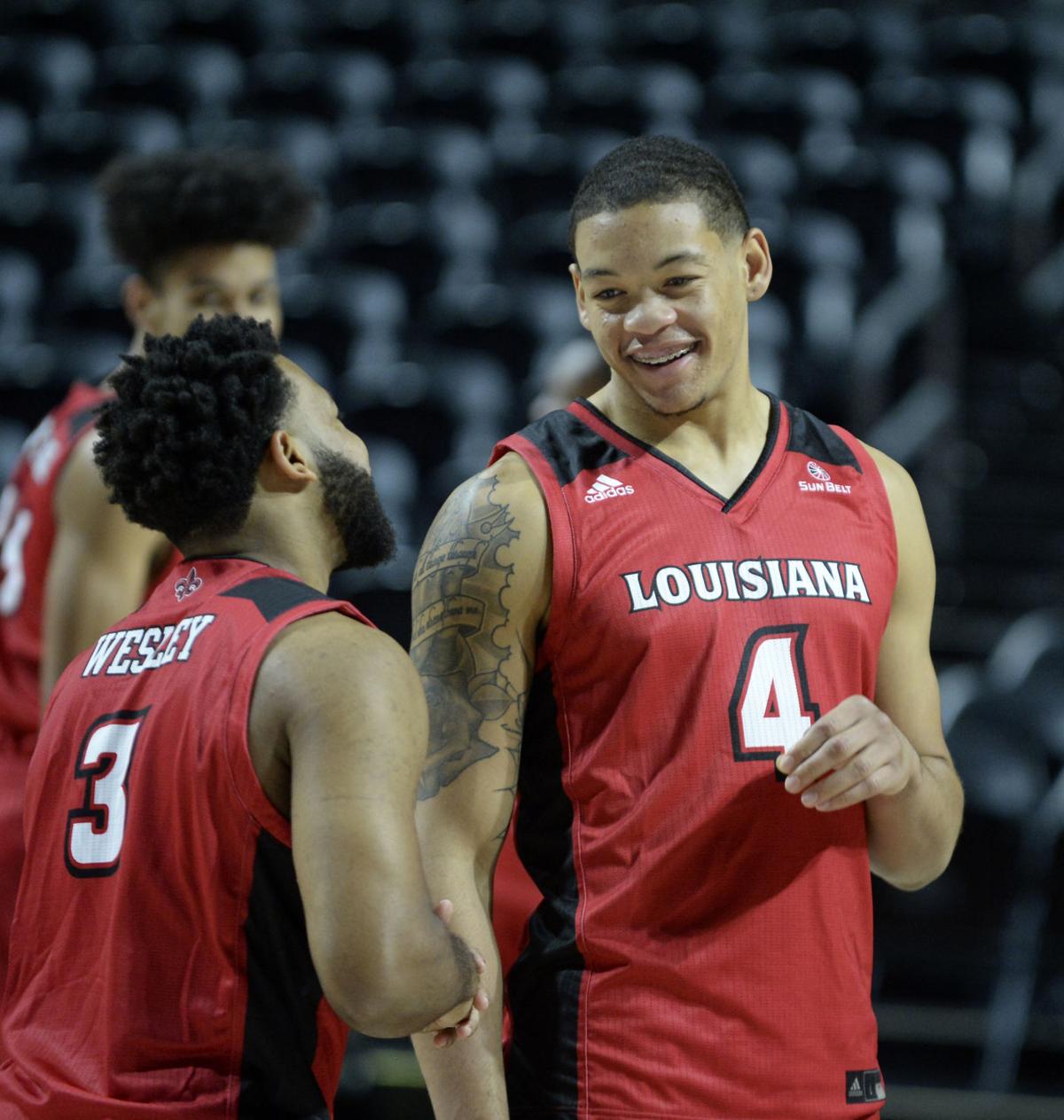 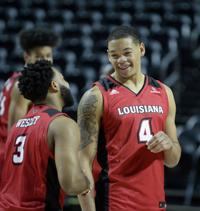 UL forward Kobe Julien (4) and guard Trajan Wesley (3) are both still held out of contact drills this summer, but are on track to be fully healthy for the regular season in the fall. 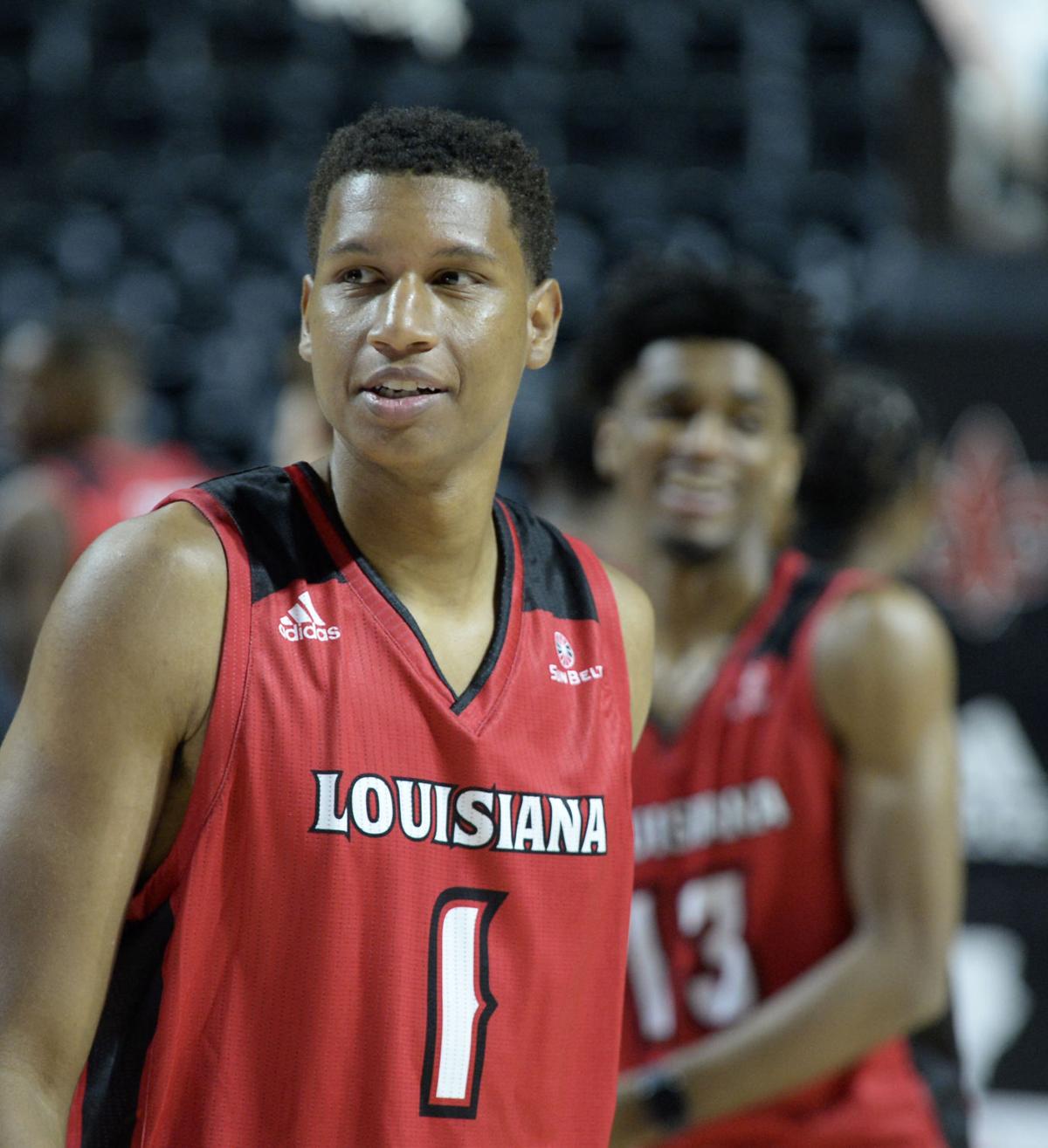 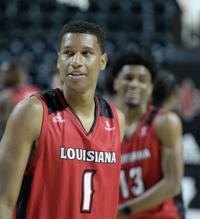 UL junior Jalen Johnson (1) exploded with a career-high 27 points in the Cajuns' 81-60 win over ULM on Saturday in the Cajundome.

UL forward Kobe Julien (4) and guard Trajan Wesley (3) are both still held out of contact drills this summer, but are on track to be fully healthy for the regular season in the fall.

UL junior Jalen Johnson (1) exploded with a career-high 27 points in the Cajuns' 81-60 win over ULM on Saturday in the Cajundome.

Of the nine newcomers on UL’s 2019-20 men’s basketball team, none know exactly how much offense was lost off last year’s squad as much as the Cajuns’ Capital City connection does.

Both Baton Rouge natives — 6-foot-7 junior Jalen Johnson and 6-6 freshman Kobe Julien — witnessed the ups and downs of UL’s 19-13 campaign a year ago firsthand while sitting on the bench.

Johnson sat out because of NCAA rules after transferring to UL from Saint Louis following his sophomore season, and Julien was out recuperating from a knee injury suffered late in his senior season at powerhouse Madison Prep.

Consequently, there’s likely no two teammates more ready for this season to begin, or being counted on more to produce, when coach Bob Marlin’s club tips off against Loyola of New Orleans at 7 p.m. Tuesday in the Cajundome.

“I was really looking forward to this season,” Julien said. “I’ve been waiting to play college basketball for a year.”

Who will UL men's basketball team's top scoring options for the upcoming season?

The UL Ragin’ Cajuns had their share of high and low points during last season’s 19-13, 10-8 showing.

Sitting out isn’t easy for any player, much less a freshman eager to experience the next level.

“Early in the year, it was hard to get my head around it that I wouldn’t be playing,” said Julien, who is the son of former Cajuns center Wayne Julien (1976-81). “Once I got around that, I was able to soak everything up and talk to all the older players so I’d be able to take the next step forward and know what to do when I do get back on it.”

Julien makes the trip across the Atchafalaya Basin bridge after being named the Class 3A Most Valuable Player, averaging 24 points and 10 rebounds a game. He played a big role in his high school team winning four straight state titles.

Now that the season has arrived, however, Julien is ready to do whatever the Cajuns need as he gets his feet wet in the college game.

“The speed and how physical it is so far, but that’s bound to get taken care of,” he said. “I’ll get used to that. I’m just going to do what’s needed at that time. If somebody else is scoring, just go get some rebounds.”

Johnson, meanwhile, has experience at the collegiate level, averaging 9.1 points a game as a sophomore and 7.5 as a freshman in the Atlantic-10 Conference.

“I think I will have to be one of the main contributors, but we have so many different options and so much talent that it won’t always have to be me,” Johnson said. “Ced (Cedric Russell) can light it up, P.J. (Hardy) can light it up, Dou (Dou Gueye) can go get a bucket, Kobe (Julien) can go get a bucket. We’ve got Mylik (Wilson) coming in as a freshman too. He’s solid so we’ve got a lot of options. But when it comes down to it, I think coach has the right play for us.”

For the record, Johnson said the rust is already off his game after sitting out a season.

“That’s no concern of mine,” said Johnson, who led University High to three state titles during his high school days. “Rust is part of the game, but that’s off now. I don’t think that will effect me personally, because I try to be more of a playmaker than anything. I try to get my teammates involved.”

So while Johnson certainly has the ability to score as a 39 percent shooter from 3-point land as a sophomore, he doesn’t view himself as just a scorer. Despite being a leading candidate to be the team's leading scorer after losing 73 percent of the team's points from a year ago, Johnson expects to help the Cajuns in many ways.

“I play hard,” he said when asked to describe his game. “I play with a lot of energy. I try to get rebounds, make the hustle plays that people probably don’t notice but make a huge difference in the game.”

Marlin has discussed some “chemistry issues” on last year’s squad during the offseason. Johnson brings the perfect approach to prevent such obstacles to success this season.

(Editor's Note: By all standards, the 2018-19 athletic school year was a disappointing one for many UL Ragin' Cajuns programs. This is the 10t…

In fact, the 6-foot-7 Johnson said he’s never seen a team with such good chemistry before.

“I think the team has high quality in just their personalities and the way they carry themselves first and foremost,” Johnson said. “We get to class, we’re on time, we’re always hanging out with each other. There’s something about this team that I’ve never felt with a team before.

“I think it’s practice. We compete so hard in practice that we don’t have any choice but to come together at the end. We all know that we’re on one team and we all need each other to win.”

“Our chemistry is really good and it’s only going to get better, because we’re so close with each other,” Julien said.

And likely to an even higher level than Julien experienced, watching from behind the bench last season has better prepared Johnson for the upcoming challenge.

Julien is also convinced he’s ready to make an impact now that his knee is better.

“Conditioning, so I can play full speed as long as I can and be able to chase down as many rebounds as I can,” Julien said. “The injury is behind me. That’s nothing to worry about.”