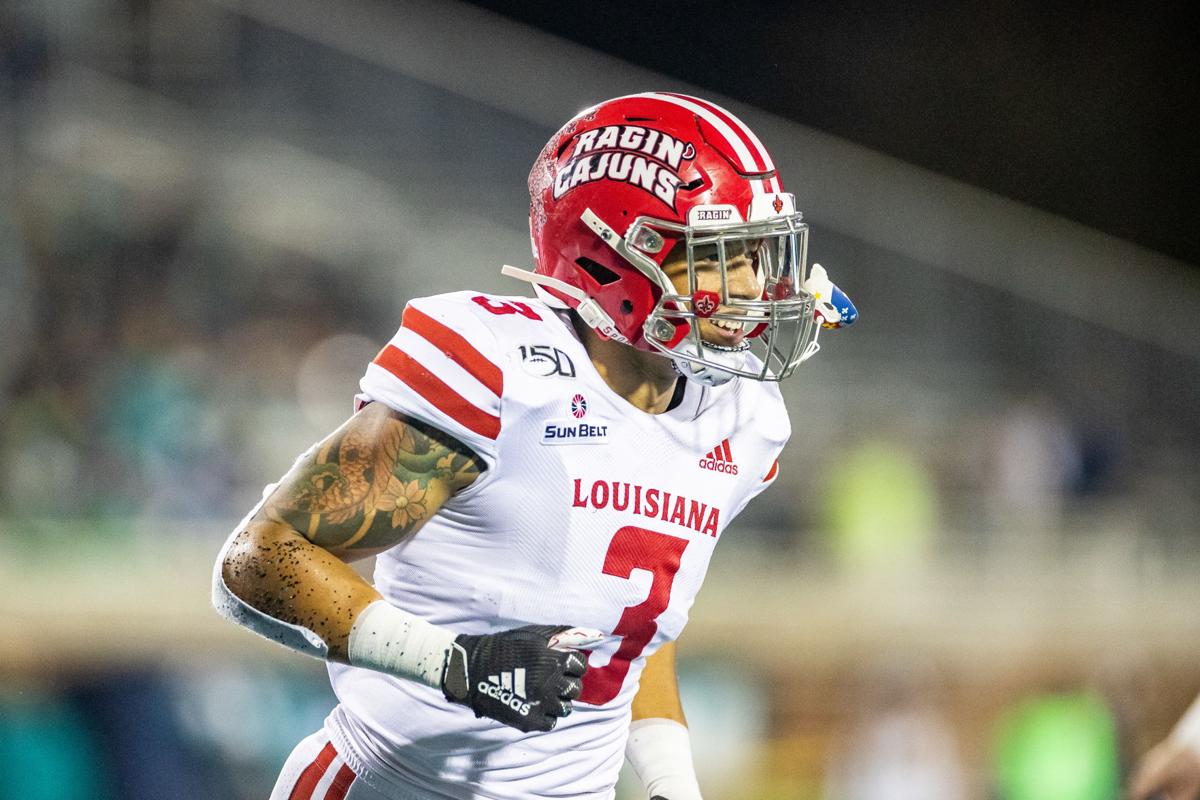 UL running back Ashton Johnson (3) will be one of 20 seniors the program will honor Saturday against ULM for Senior Day at Cajun Field. 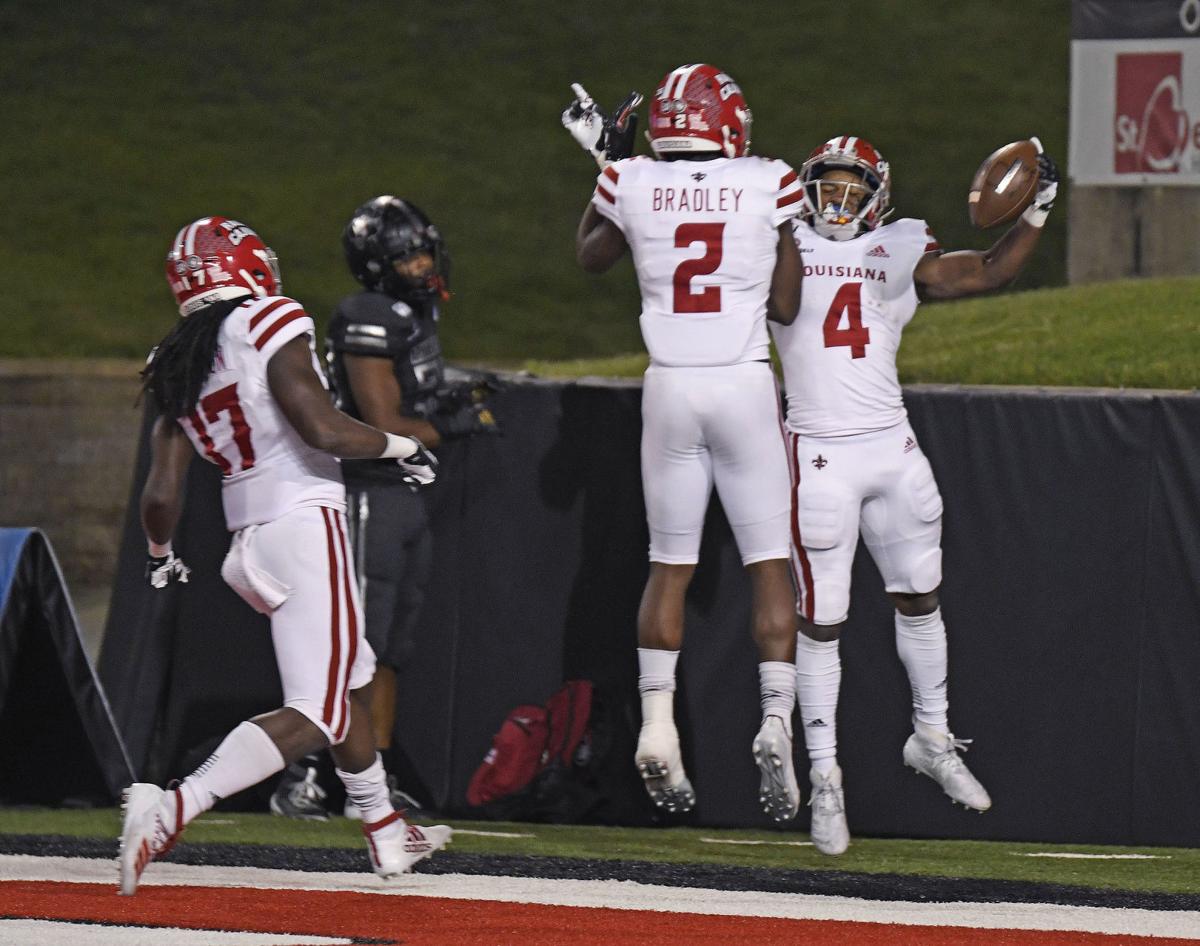 UL senior receiver Jarrod Jackson (17), shown here celebrating a touchdown earlier this season with fellow seniors Ja’Marcus Bradley (2) and Raymond Calais (4), said he wants his final game to end the right way with a victory over Miami of Ohio.

UL running back Ashton Johnson (3) will be one of 20 seniors the program will honor Saturday against ULM for Senior Day at Cajun Field.

UL senior receiver Jarrod Jackson (17), shown here celebrating a touchdown earlier this season with fellow seniors Ja’Marcus Bradley (2) and Raymond Calais (4), said he wants his final game to end the right way with a victory over Miami of Ohio.

It’s easy to understand why Saturday’s Senior Day at Cajun Field is going to be so special for UL coach Billy Napier and his staff.

Before Napier even finished his introductory statement after last Saturday’s Sun Belt West-clinching demolition of Troy, he was already looking forward to that opportunity to shine a spotlight on his 20 seniors a week later.

“This group of seniors is a special group of people to our staff,” Napier said. “It’s certainly a group that’s been through a lot — the good, the bad and the ugly. They’ve had a lot to do with the success we’ve had — even last year and this year. There’s some good players, but a lot of special unique talented people in that group of seniors.”

Perhaps it comes with in-state rivalries, or perhaps it’s just this opponent.

Indeed, even from afar, it doesn’t take much effort to find plenty of good things to say about this senior class.

When a new coaching staff takes over, the players it inherits doesn’t always buy in and quickly adapt to the new approach.

A huge part of the successful transition for Napier’s staff was the leadership of this senior class.

“You start with this senior group, it’s one of the things that’s most important to me is that we send this group of players out the right way, so we’ll be playing to honor these seniors,” Napier said.

Sure, many of them are top-notch performers. Ja’Marcus Bradley is one of the program’s best wide receivers ever.

Kevin Dotson and Robert Hunt are two of the most celebrated offensive linemen in school history.

Fittingly, all three of those will be in postseason All-Star games.

Veteran standouts like linebacker Jacques Boudreaux, safety Terik Miller and running back Raymond Calais didn’t arrive on campus with guaranteed starting spots, witnessed and enduring plenty of the down sides to college athletics and are now leaving the program in style … regardless of what happens on the field the rest of the way.

Senior cornerback Michael Jacquet went from a highly-touted wide receiver to making a successful switch to cornerback and plays and talks like a leader the secondary needs.

Senior defensive lineman Bennie Higgins had to endure playing way more snaps than anyone wanted him to play as a junior due to a severe lack of depth and is now relishing the rotation he leads.

A senior like safety Deuce Wallace transformed himself from a walk-on running back to starting safety with a "captain" on his jersey. The selfishness displayed with both their actions and their words from leaders like Wallace and wide receiver Jarrod Jackson.

After poor crowd against Troy, Napier hopes fans show up for regular-season finale

The Appalachian State game on Oct. 9 was encouraging with 21,012 fans. The next game was homecoming against Texas State with 21,063 fans.

A left tackle in Rico Robinson rebounded from the blow of losing his starting position just in time to help ease the transition of a beat-up, reshuffled offensive line and helped continue that unit’s top-notch play.

Then there’s senior placekicker Stevie Artigue, who overcame multiple obstacles and then an unfortunate slow start to his senior season with an impressive flourish down the stretch.

There’s late arrivals like graduate transfer Nick Ralston who got in just in the nick of time with the summer injuries to two starting tight ends and late bloomers like cornerback Kamar Greenhouse who is enjoying extended playing time as a senior.

Think about how dynamic this group is historically.

So many of them entered the program expecting to win, saw way more losses than they ever expected early on and are now quite possibly going out with more wins than the program ever enjoyed.

So while there might not be maximum incentive on paper in terms of the Sun Belt standings come Saturday night for the Cajuns (9-2, 6-1) to beat UL-Monroe, plenty of coaches and underclassmen would disagree.

Foote: Cajuns continue to strive for perfection, but plan on winning if they fall short

It sounds like the thing to say, and it’s certainly the goal every week.

“It would mean the most,” UL sophomore center Shane Vallot said. “This group of seniors has worked so hard this offseason. They’ve done everything the right way.

Then there’s six others to be honored Saturday perhaps not on the tip of the tongue of every Ragin’ Cajuns fan. That group includes: running back Ashton Johnson, tight end Alex Allen, quarterback Quentin Gibson, punter Seth Kootsouradis, linebacker Alonzo Brown and linebacker Chandler Wachholtz.

“I think it’s a historic opportunity relative to a chance to win a 10th game which would be the first time in school history, so for this group of players, this staff and all the people in our organization that work hard each day, a chance to be a part of a team that wins 10 games would be a big deal,” Napier said.

“If we can pack the stadium this Saturday for our seniors,” Vallot insisted, “it would be the best.”

For many around the country, the UL Ragin’ Cajuns are first identified by their three-headed monster in the offensive backfield.

Troy’s defense has not been good all season long.