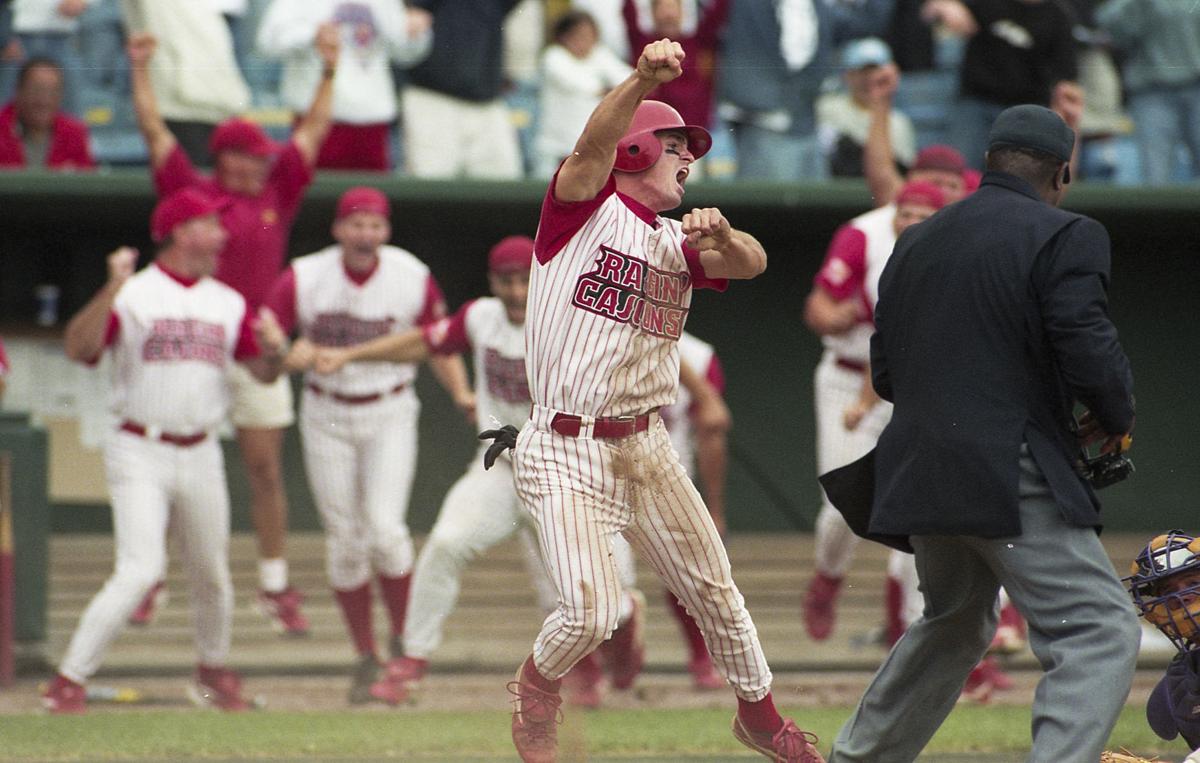 UL's Rick Haydel celebrates after scoring the game-winning run against Clemson on June 14, 2000 at Johnny Rosenblatt Stadium in Omah. 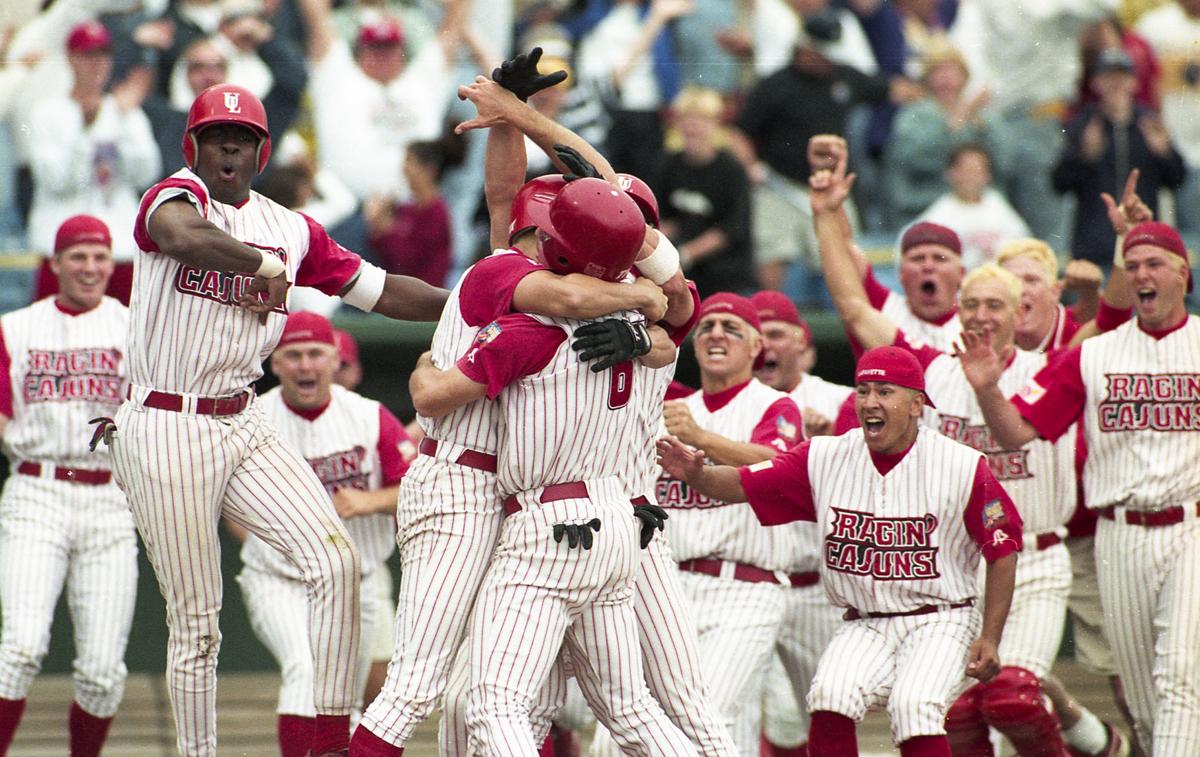 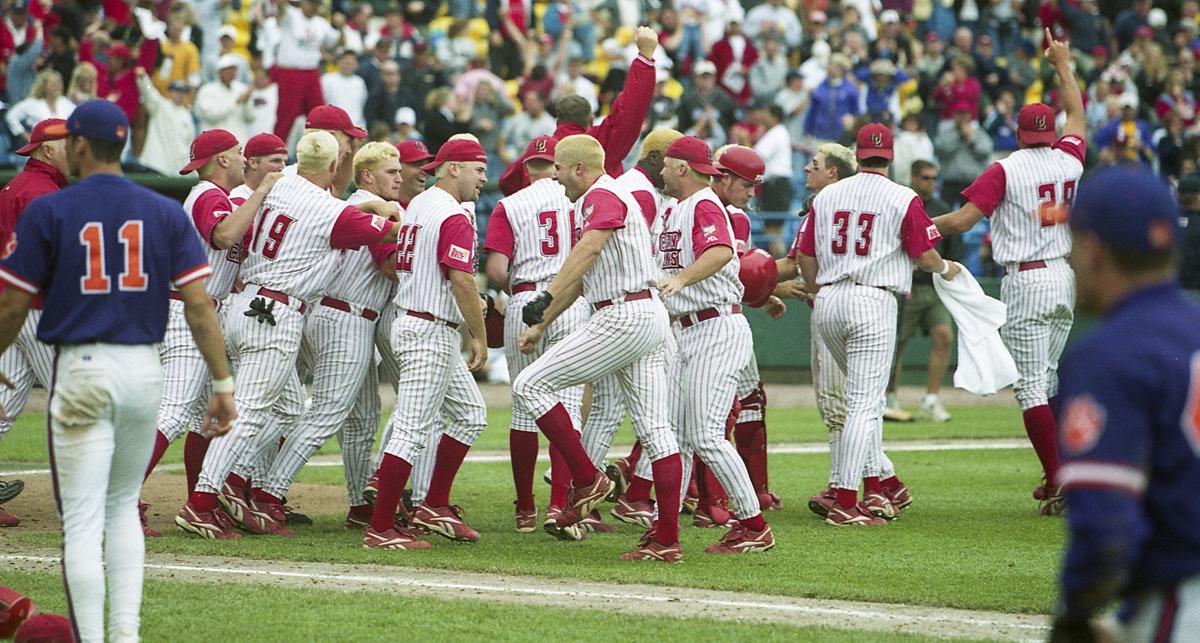 UL's bench erupts after scoring two runs in the bottom of the ninth inning to claim a 5-4 win over Clemson at the College World Series on June 14, 2000.

UL's Rick Haydel celebrates after scoring the game-winning run against Clemson on June 14, 2000 at Johnny Rosenblatt Stadium in Omah.

UL's bench erupts after scoring two runs in the bottom of the ninth inning to claim a 5-4 win over Clemson at the College World Series on June 14, 2000.

Even before he officially received the sign from third-base coach Wade Simoneaux that day, Ragin' Cajuns senior center fielder Steven Feehan knew what was coming and he knew what the result was going to be.

Or, at least, he thought he did.

Runners were on the corners with one out and UL trailing Clemson 4-3 in the bottom of the ninth in an elimination game of the College World Series.

“It’s something I took pride in even when I was a young kid,” Feehan said. “I’ve always been in that leadoff spot, so it was always drilled into me at an early age that if you’re going to be a leadoff hitter, you’ve got to be able to bunt.”

What Feehan didn't know was exactly how impactful that bunt would be.

A bunt no Ragin’ Cajuns baseball fan will forget.

On the 20th anniversary of that moment, the details remain vivid.

And why not? Those involved have retold them more than a few times over the years.

“That was an incredible memory,” Simoneaux said. “I can almost tell you every pitch in every inning offensively.”

Despite leading most of the game, the Cajuns found themselves down a run heading to the bottom of the ninth after Clemson rallied for four runs in the top of the seventh.

Red-hot in Omaha, Jarvis Larry led off the frame with a walk and Neil Simoneaux moved him to second on a sacrifice. Rick Haydel lined the next pitch to left for a single to put runners on the corners with one out.

“I remembering feeling like we were in control of the game the entire way,” Haydel said. “There was no feeling of intimidation. When they took the lead there, there wasn’t any panic. We had nothing to lose.

“We were so wrapped up in the moment, I guess I knew it was the ninth inning but when I stepped to the plate, it didn’t hit me that this was our last shot because I was so focused on what was going on and what my job was going to be.”

Haydel's hit shifted the pressure to Clemson. With Feehan stepping to the plate, the Cajuns were now holding the cards.

“With Steven Feehan, it was the perfect guy to have up there in that situation: Our leadoff hitter and a guy who can handle the bat,” first-base coach Anthony Babineaux said. “In that situation, it was basically full-proof to tie the game. So when I saw Wade give it to him, ‘Here we go, we’re going to tie the game and the game-winning run will move up to second base.”

Only, Feehan’s bunt wasn’t just a good one; it was great.

Drifting over to the first-base line, Clemson ace Ryan Mottl was forced to field, spin and rush a throw to first base to nab the speedy Feehan at first.

Making matters worse for the Tigers, their second baseman was playing at double-play depth and was late to cover the bag.

“If the bunt was more in the field of play, things could have happened a lot differently,” Babineaux said. “The pitcher would probably have had a better view of everything that was going on. He might have been able to see that the second baseman wasn’t there yet.”

But Mottl didn’t have that luxury and his throw went up the right field line.

Larry easily scored from third to tie the game.

At first base, Haydel didn’t even know the bunt was coming. His “adrenalin was pumping” after the single and he didn’t glance coach Simoneaux’s way to get the sign.

“Your role is the same, though,” Haydel said. “When Steven laid the bunt down, I was like, ‘Oh, that makes sense.’”

Haydel’s fundamentals prevailed. That and an old lesson from head coach Tony Robichaux — “to not cheat yourself when running the bases; take the right path” — pushed Haydel.

“He wasn’t a blazer by any means, but he was a good baserunner,” Babineaux said of Haydel. “He had a high baseball IQ. He had good instincts. He took good secondary leads. The fact that he had a good secondary lead, it got him that much closer to second base when the bunt was put down. Whereas some runners would have just been getting to second base when the ball was thrown away, Rick was already there, had popped up and spun around to see what was going on at first base.”

Simoneaux saw Haydel was in a good position, but still this was a huge moment.

“Do I take the chance?” Simoneaux thought.

“There was only one out, but Rick ran the bases so hard,” Simoneaux said. “I just had to send him. Usually you don’t take that chance with one out, but Rick gave me the green light by the way he ran from first to third. He never broke stride, so I had to trust my guy.”

After seeing Singleton’s throw, Simoneaux regretted his decision for a split second.

He wasn’t wrong to worry. Singleton’s throw was on the money, but so was Haydel’s slide.

“I didn’t realize it was going to be that close,” Haydel said. “I guess I could tell by the way the catcher was angled at the plate that I needed to make an awkward slide and the rest just kind of worked out.”

After barely sliding in safely for the game-winning run, making the Cajuns the first team to win two College World Series games in its first trip to Omaha, it took a moment for reality to set in.

“I remember when I scored, it didn’t hit me right away until a few seconds later when it hit me, ‘Man, the game’s over,’” Haydel said. “It was just playing to get on base, get around and get in.”

It was the team’s 49th win of the season. It would be difficult to come up with a more exciting finish on a bigger stage.

The win earned the Cajuns a rematch with Stanford. The Cardinal had beaten UL 6-4 in the tournament opener, before the Cajuns doubled San Jose State 6-3 to force the matchup with Clemson.

UL’s bats came to play early the next day against Stanford, building a quick 6-0 lead in the middle of the second inning, but UL ran out of pitching was eliminated 19-9.

Reliving the fantastic finish of that Clemson win, though, will never get old. Especially for Feehan.

Not only did he get down the bunt that capped the rally, Feehan also stole home in the fifth inning to follow solo home runs by Will Hawkins and Tommy Clark in the fourth.

“I think back to that game every time someone introduces me to someone new and they refer to me as, ‘This is the guy who stole home in the Clemson game,’” Feehan said. “I’d say it happens a couple of times a year.

“It was definitely something that we’ve done throughout my career there. It was something that we did a couple of times during the regular season. So when I got to third base after the first or second pitch, coach Simoneaux just kind of walked up to me and said, ‘Can you get it?’ I knew what he was referring to and I said, ‘Yeah, I can make it.’ ”

For Feehan, choosing which play he's most fond of is difficult.

“Definitely both of them are pretty special for myself,” he said. “Winning the game in the end is what you want to do, so I’d probably put the bunt ahead of the steal of home.

“Those two plays were two of the biggest plays in my career by far."

That bold move to steal home was an example of the mentality the 2000 Cajuns had.

“Our guys were scared of no one,” Simoneaux said. “They didn’t fear anyone. That’s what I loved about our group.”

Simoneaux still remembers No. 1-ranked South Carolina trying to intimidate UL’s squad during a practice session the day before their Super Regional in Columbia, South Carolina, by walking “in a single file line like it was a little boot camp. Ryan Gill and Nate Nelson just started laughing.”

Haydel and his teammates relished upsetting the Gamecocks to earn the trip to Omaha.

“When we walked on that South Carolina field, they were making fun of us on that first day because we were doing our little chant,” Haydel said. “I remember thinking, ‘You know what, these guys don’t know who we are, but we’re about to show them who we are.’”

Simoneaux said the entire postseason in 2000 is something he’ll never forget.

“Of course, beating South Carolina to get there was probably the biggest joy of all of our (baseball) lives — beating the No. 1 team in the country on their home field,” Simoneaux said. “That celebration after that game was just incredible.”

Taking a page out of his team’s play book, Simoneaux was aggressive off the field in Omaha as well, challenging the Sun Belt Conference office to pay for steak dinners for the entire coaching staff and their wives for each College World Series victory.

So after knocking off San Jose State, he said, ‘Hey, same deal tomorrow if we beat Clemson,’” Simoneaux said. “He said, ‘You got it coach.’ They were on board with whatever we did, because we were representing the conference so well. Plus, that was the year of the name change. It was big. Real big.”

“We didn’t have any bad apples on that team,” Haydel said. “Everybody had a role and everybody was happy with that role. Then you had leaders like Nathan Nelson and Ryan Gill and (Danny) Massiatte. Robe was big on accountability and they were big on accountability in the dugout. There wasn't any hanging your head or getting down after a loss. We played to win.”