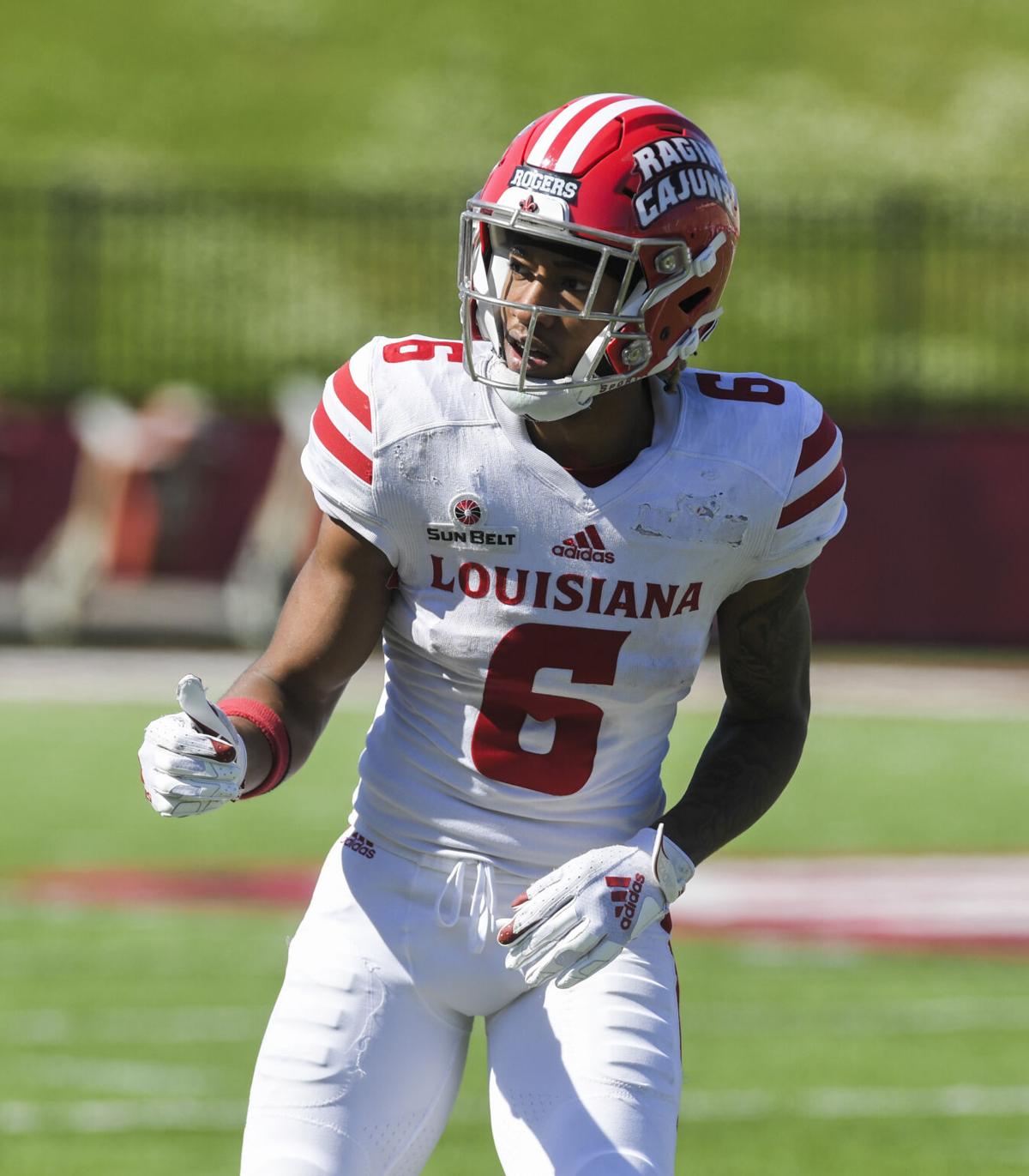 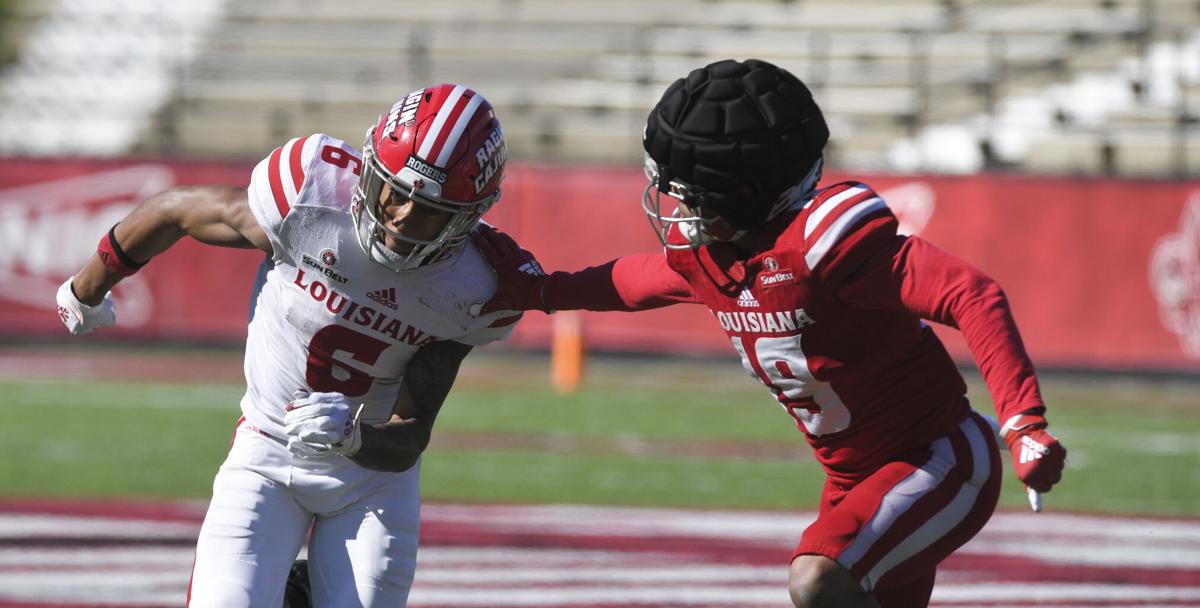 UL football wide receiver Errol Rogers, Jr. (6), shown here against against cornerback Eric Garror (19) during spring practice at Cajun Field on Thursday, has provided a lot of versatility to the Cajuns' receiving corps.

UL football wide receiver Errol Rogers, Jr. (6), shown here against against cornerback Eric Garror (19) during spring practice at Cajun Field on Thursday, has provided a lot of versatility to the Cajuns' receiving corps.

Their time together watching and talking about football apparently made a difference.

Errol Rogers Sr. remembers his 4-year-old son sitting on his lap in Starkville, Mississippi, watching his hero Reggie Bush do a little bit of everything in a memorable USC win over Fresno State in 2005.

“He wanted to do everything Reggie Bush was doing,” said Rogers Sr., who was an assistant women’s basketball coach at Mississippi State at the time.

Few college football players will ever match the exploits of Bush, but Errol Rogers Jr. certainly made an immediate impact on the UL Ragin’ Cajuns as a freshman wide receiver.

So when several UL veteran receivers suffered a series of injuries last offseason, Rogers Jr.’s knowledge of the game paid off big.

"It was stressful," Leger said. "He saved us really in the (wide receivers) room, because he was so versatile for what he could do for us."

A year later, little has changed on that front.

“The biggest advantage was Errol Sr.,” Leger said. “Most of the time guys, coaches’ kids just get ball. He’s a pleasure. We were kind of joking today. He was moving around today. We had some guys that were a little winded and he started hopping around to different positions.

“He practiced all day at ‘H’ yesterday and all day at ‘Z’ today. He’s just that guy. I’m glad we have him on our team. I know that.”

"Errol, he’s a true asset," Lewis said. "You can move him from slot to outside. He doesn’t get nicked up. He’s real dependable. I would say Errol is one of our biggest assets right now on the team. What he’s learned from a freshman until now at ‘Z’ and ‘H’ is the best. His growth has shown. I think the future is real bright for E. He just needs to stay healthy and keep going."

His versatility goes back to when he was 7. That's when he started playing tackle football in Vermilion Parish, because Lafayette Parish didn’t start until 9.

“He played quarterback, running back, wide receiver and even played defensive back,” Rogers Sr. said. “He played whatever position the coaches needed him to.”

During his career at Lafayette Christian Academy, Rogers primarily played wide receiver and quarterback. His time at quarterback is something Lewis recognizes.

That doesn’t mean Rogers Jr. didn’t have growing pains like every other freshman endures.

“Honestly with (LCA) coach Trev (Faulk) working us hard like that every day, I thought it was going to really be like that, but it’s way different,” he said of the college game. “Workouts are way harder and practices are really tough. They really push us, but we’ve got to do that to be great.

“The game speed is way faster.”

And the opportunities don’t come as often.

That’s also where having a coach for a father can pay off.

After overcoming an injury during August drills that slowed his progress, Rogers Jr. got a little playing time during the season-opening win over Iowa State.

So he was really fired up for the road trip to Georgia State, only it turned out he didn't play in the overtime win.

“I could tell by the look on his face after the game … he had a long face,” Rogers Sr. said. “I told him not to be selfish because he didn’t play. I don’t know the reason he didn’t play and neither did he, but there was a reason. I just told him to trust his coaches. Just to keep practicing hard and be ready.”

Apparently, Rogers Jr. listened. In the home opener the next week, he got the start and caught his first collegiate touchdown.

“My wife and his sisters were jumping up and down, but I didn’t,” said Rogers Sr., who is the Lafayette Christian girls basketball caoch and was formerly the women’s coach at UL. “I just kept calm and soaked it all in. I was just enjoying the moment.”

Known as an excitable basketball coach on the bench, Rogers Sr. said he’s completely different as a dad.

“Almost every day,” he laughed when asked how often he thinks about it. “People always bring it up for some reason. I’ll just be walking around and they’ll be like, ‘Oh, you’re first touchdown.’ They always bring it up.”

His best game statistically was four catches for 32 yards at Texas State.

“It was really just seeing what the defense is doing,” Rogers Jr. said of his biggest obstacle last season. “In high school, they’re not really moving around like they do in college and the higher levels. Just seeing what they’re doing pre-snap and post-snap.”

These days, he’s giving UL’s coaching staff more options as to where he might fit into the receiving game’s plans.

“I just want to be great,” Rogers Jr. said. “Watching the other receivers here — Devonta Smith who is going to be in the draft this year — seeing them just, I just want to be better and work on that.

“Just every day saying we’ve got to be great and do better than last practice … explosive plays, just every day.”

There is just no denying the impact 6-foot-5, 333-pound defensive tackle Tayland Humphrey had on UL’s defense during the Cajuns’ 10-1 season l…