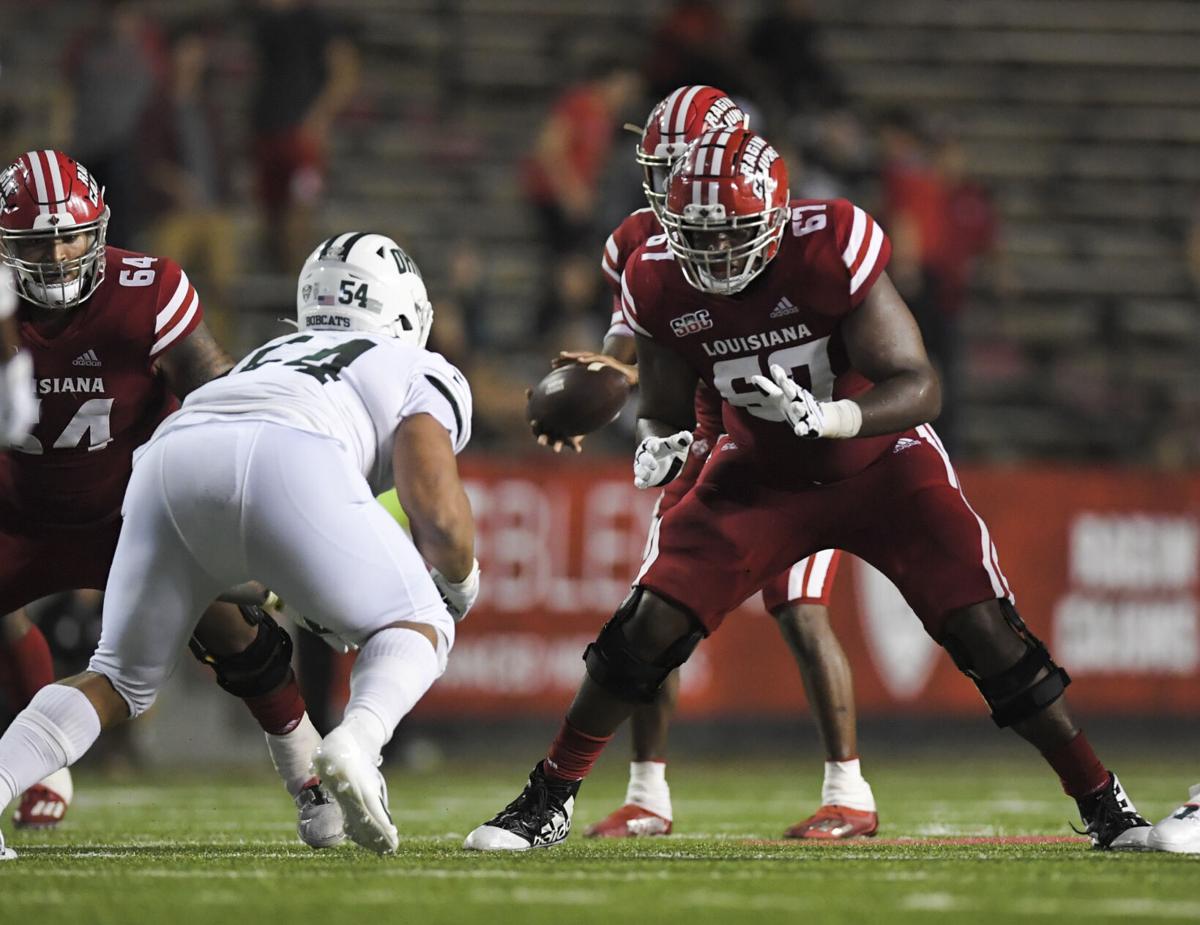 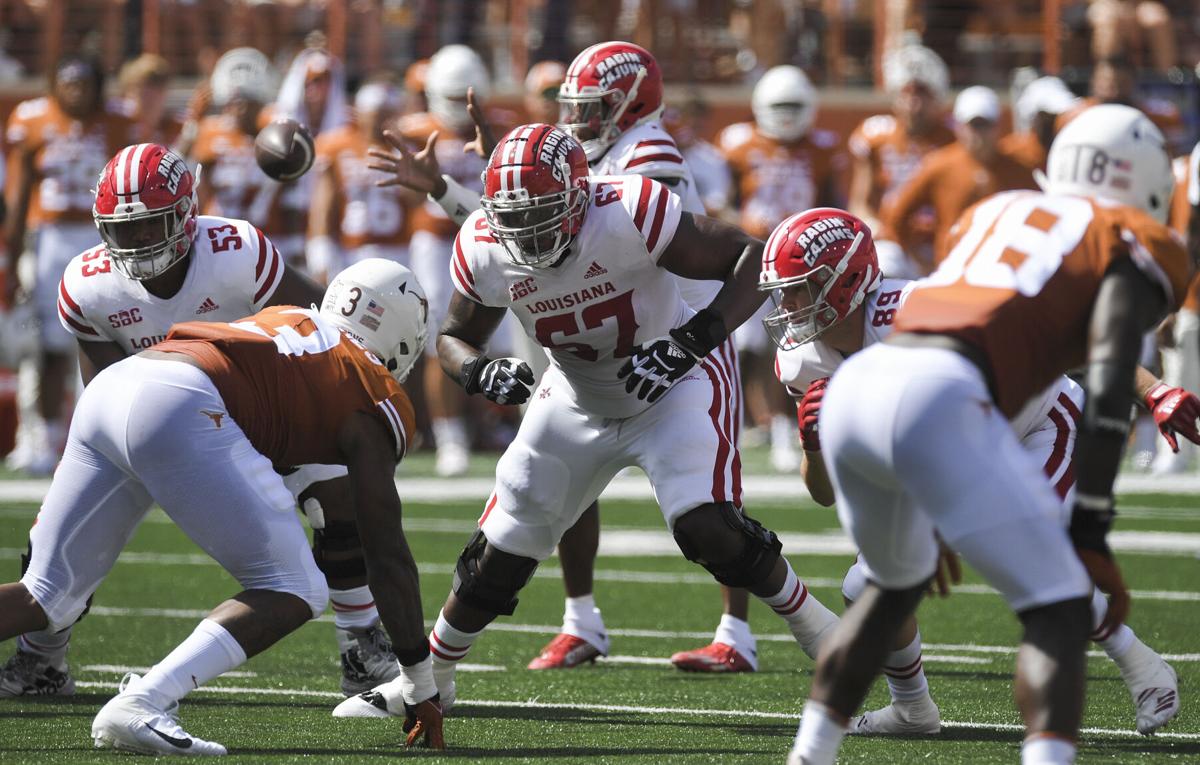 When offensive lineman Ken Marks arrived on UL’s campus seven years ago out of Central High in Beaumont, Texas, he thought he knew a little about football.

These days, the new starting left tackle for the Ragin’ Cajuns realizes how little he actually knew back then.

All the knowledge he’s gained can make interviewing the 6-foot-4, 297-pound Marks much like talking to a coach.

The UL defensive front was instrumental during the program's first win over Appalachian State last season.

It appeared the left side of the offensive line shined with Marks at left tackle and freshman A.J. Gillie faring well at left guard.

But Marks said he knows enough about the big picture now to view it that way.

“Everybody talks about the left side or the right side, (but) it’s a collective effort. That’s why we have a saying, ‘Five equals one.’ That’s how we go about things over here.”

Marks isn’t just repeating a coaching slogan he read on a wall. He’s got specifics to illustrate the point.

The strange portion of the UL football schedule has arrived.

Marks, who is called "Grandpa" by many on the team, gives credit to his former UL offensive line coaches for teaching him the game.

"I can give credit to coach (Rob) Sale and coach (DJ) Looney for that," Marks said. "I would go in and I would talk to them just trying to understand, ‘Why are we running this play? What makes us run to this technique or this shade?' Just talking to those guys and getting the gist of actual football. I knew my position. I knew what I had to do, but I didn’t understand why we were doing certain things. Now I do."

Going into the trip to South Alabama, the Jaguars’ defense was No. 4 nationally and leading the Sun Belt by allowing only 55 yards rushing per game.

At the same time, UL starting left tackle Carlos Rubio had been declared out for the season, as were two reserve offensive linemen. The only time this season the running game had matched its reputation was against Ohio when Rubio started.

That all changed in Mobile, Alabama, with the offense averaging 6.8 yards a carry.

Foote: So much about this Cajuns team just doesn't add up

The UL Ragin’ Cajuns are 2-0 in Sun Belt Conference play with two road wins, but that only begins to tell the story.

Still, it’s all about team for Marks.

“Now that I’m a tackle and he’s a guard, when we’re at practice, we’re talking more. We have an understanding what each other is going to do, what calls we’re going to make on certain plays. It’s like a brotherhood thing coming together.”

Marks also hinted at a little extra motivation for the South Alabama game.

“People seem to disrespect us every week, trying to say little things to get under our skin, just for instance saying we can’t run the ball,” he said. “That’s what we pride ourselves on, being able to run the ball.”

Despite having prior experience at tackle, there were adjustments to be made for the seasoned Marks.

Over South Alabama’s first seven possessions in Saturday’s 20-18 loss to UL, its offense had two plays of 20 or more yards.

“Being a tackle, it’s considered like an island, so there’s a lot more one-on-one blocks than when I’m at guard where I have a lot of double-blocks working with somebody to get to another man,” Marks said. “So I would say just focusing on the intangible things, the miniscule technique things, every day in individual going over something that I messed up in the game — vertical set, getting my second step down, don’t get beat inside — things like that.”

“It’s a little bit of a process when you spend most of training camp as an interior player,” Napier said. “We’ve always worked Ken outside as part of our contingency plans, but Ken’s got some length. He’s 6-3 and a half, but he’s extremely long. He’s got enough length out there to survive on pass protection on the edge.”

So it’s going to take extra focus Tuesday with 4-1 Appalachian State in town, right? After all, this is the biggest game of the season, correct?

Marks isn’t buying that one either.

“I treat every game the same,” he said.

Again, he has an example to prove his point.

“That’s just like treating a play in the first quarter or the first play of the game,” he said. “Think about it, Kendall (Wilkerson) made a block on a field goal early in the game. You didn’t understand or know how much at the end of the game, how much blocking that field goal would have on the ending of the game. So every day, just take it one day at a time … every game, take it one game at a time. That’s how we go about it over here.”

Marks is highly respected among UL’s coaching staff with such a healthy mindset.

“In general, Ken’s just a really smart player,” Napier said. “He’s a foxhole guy. He’s going to do whatever’s required for the team, very intelligent. The guy’s in his seventh year of college football. He’s seen a lot in his career. He’s certainly a guy I’ve got a lot of respect for.”

Foote: Tuesday's Appalachian State game much bigger than the standings for Cajuns

It’s not really a do-or-die game.