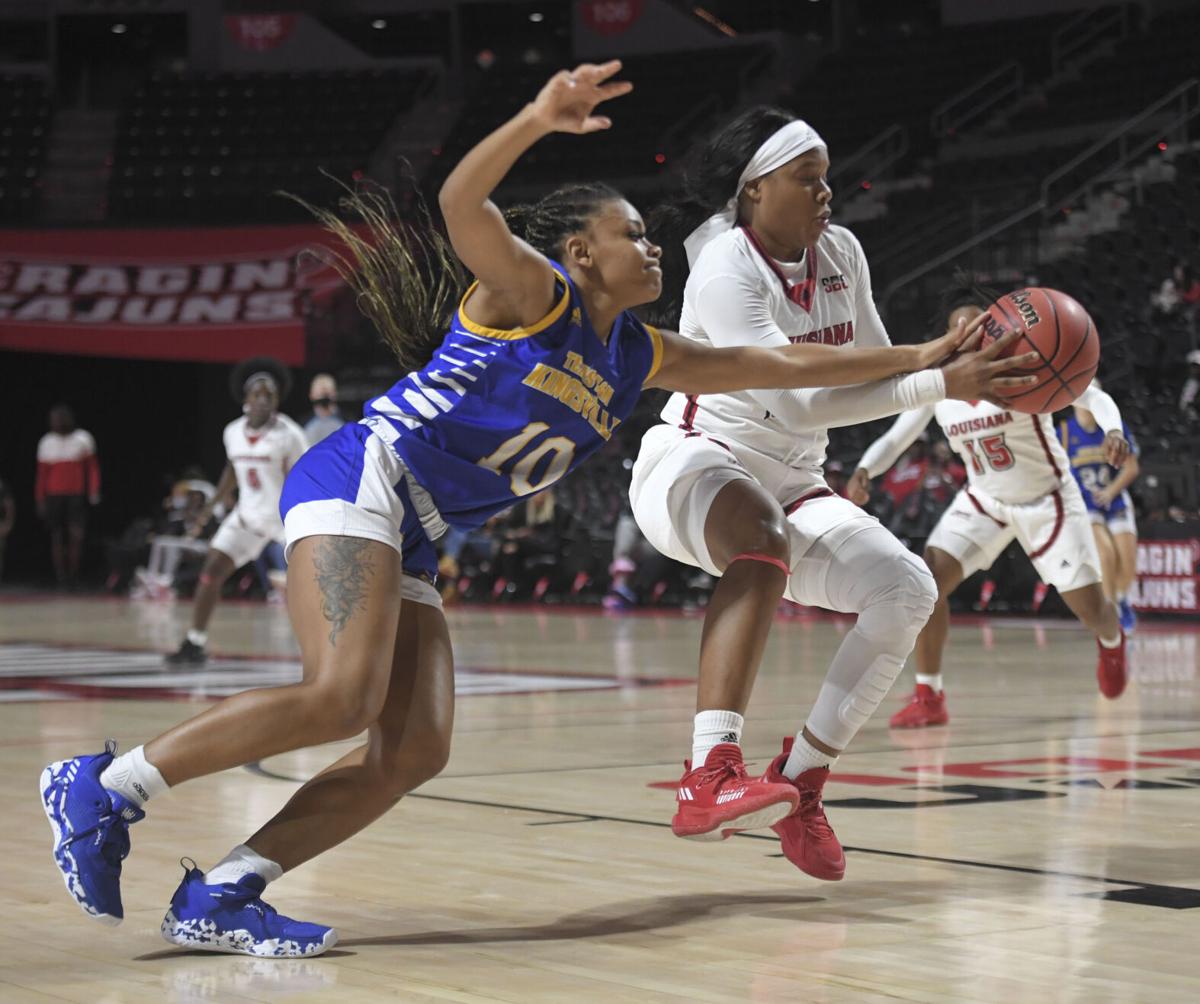 UL guard Brandi Williams, shown here in last week's home opener, poured in 24 points on the road in the impressive road win over Rice on Saturday. 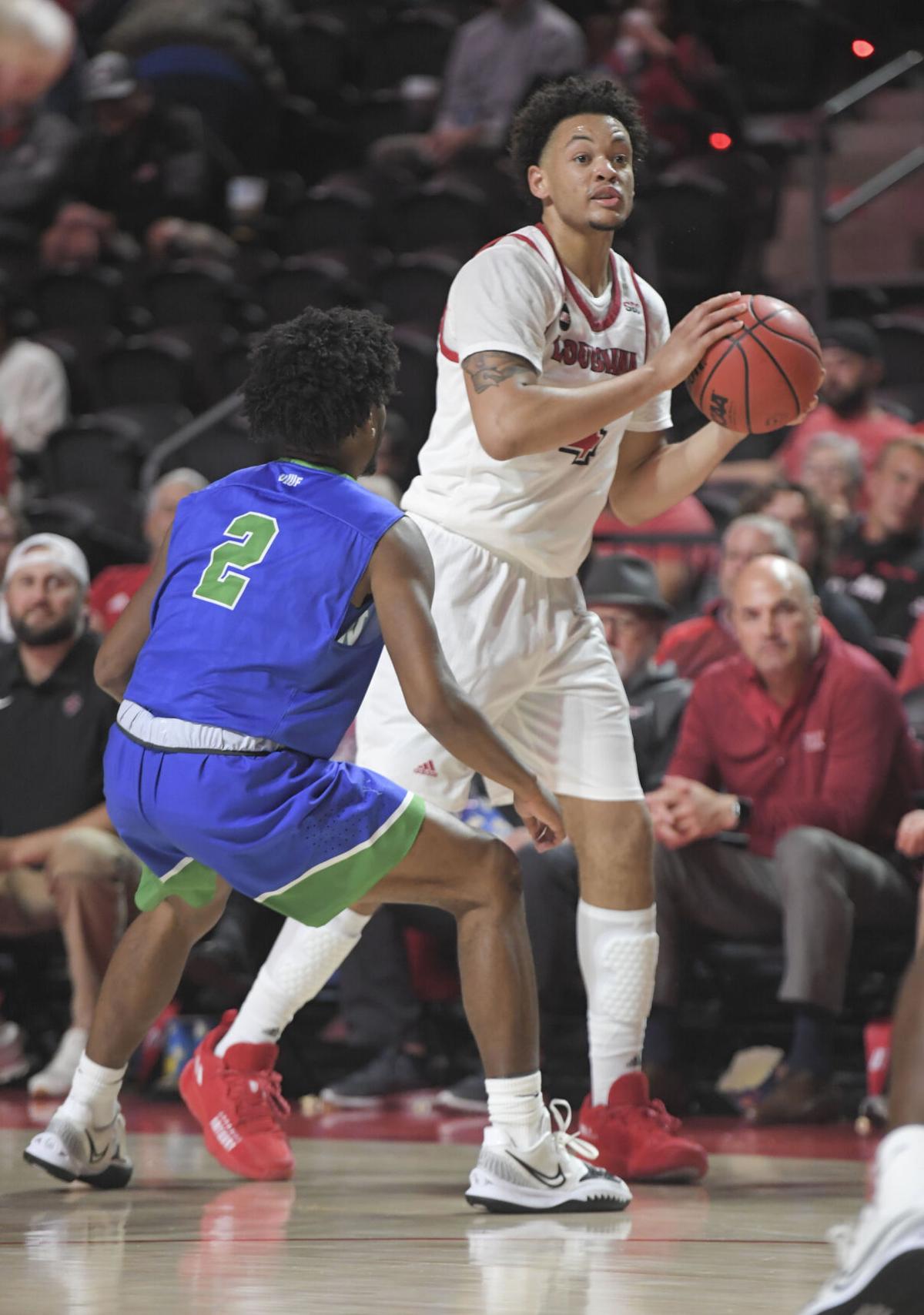 UL forward Kobe Julien was limited to 19 minutes due to foul trouble, but his 10 points came in handy during the Cajuns' second-half explosion in the win over Southern Miss.

UL guard Brandi Williams, shown here in last week's home opener, poured in 24 points on the road in the impressive road win over Rice on Saturday.

UL forward Kobe Julien was limited to 19 minutes due to foul trouble, but his 10 points came in handy during the Cajuns' second-half explosion in the win over Southern Miss.

The excitement for the UL football season is building toward the much-anticipated Sun Belt Conference championship game on Dec. 4 at Cajun Field.

And it should be.

But lost on some during the weekend coach Billy Napier’s program secured home field advantage for the league title game was the Ragin’ Cajuns men’s and women’s basketball teams offering more hope for a great winter sports season.

Both teams started slow and then caught fire down the stretch for big road victories to improve to 2-0.

Neither one had ever seen film of his father playing for the UL Ragin’ Cajuns.

The men outscored Southern Miss by 15 points in the second half for a 66-45 win in Hattiesburg.

The women used a 32-point outburst in the fourth quarter to knock off Rice.

That game was scheduled to be played in Lafayette, but UL coach Garry Brodhead moved the game to Houston to accommodate the Cajundome hosting the LHSAA state volleyball tournament.

Rice was 23-4 last season and won the Women’s NIT. This was not your everyday road win, probably the athletic department's best win on paper this school year.

“It’s an exciting way to start the season,” Brodhead said. “It’s big for us.”

The Owls are known for being huge and they were. But somehow the Cajuns got scorching hot in the second half to overcome a 42-19 rebounding deficit.

“The matchup was really difficult,” Brodhead said. “Getting outrebounded by 20 and still winning, I would have never thought that.”

This could be the most interesting season in coach Garry Brodhead’s decade as the coach of the UL women’s basketball program.

The Cajuns shot a staggering 90% from the field in the fourth quarter, including 3-of-4 shooting behind the 3-point arc. The Cajuns also made 11 of 14 free throws after missing 5 of 8 in the first half. Brandi Williams had 24 points on 7-of-9 shooting, followed by Destiny Rice with 12, Ty’Reona Doucet with 12 and Tamera Johnson with 11.

Those four shot a combined 80% from the field for the game.

Next for the UL women is a game against LSU and new coach Kim Mulkey at 6 p.m. Thursday in the Cajundome.

The men also faced an early game quandary inside.

Southern Miss was doubling Cajuns’ inside duo of Jordan Brown and Theo Akwuba and forcing UL to beat it from the perimeter.

Despite having some success early, the Cajuns finally caught fire in the second half with 37 points to pull away.

“It was a slugfest in the first half,” UL men’s coach Bob Marlin said. “Both teams were going at it.

“Offensively, had trouble putting the ball in the basket, but defensively, we were spot on.”

When former Catholic High of Baton Rouge standout Kentrell Garnett joined the UL Ragin’ Cajuns prior to last season, it was a safety measure t…

UL recorded 15 steals as a team and produced 20 points off turnovers.

UL’s defense hasn’t allowed either opponent to score more than 24 points in a half.

Kobe Julien settled for 10 points in 19 minutes after first-half foul trouble, but most of his damage was during UL’s 28-9 run over the final 9:01.

“We’re always getting better,” Marlin said. “There’s always room for improvement. Just be consistent. We’ve got to be in the right rotations … make contact on block-outs. The effort’s been good, and that’s the main thing.”

In the preseason, UL women’s coach Garry Brodhead advised to keep an eye on for freshman forward Tamera Johnson this season.

The UL men’s basketball team will host the Xavier Gold Rush from New Orleans at 7:05 p.m. Wednesday in the Cajundome before embarking on a rug…