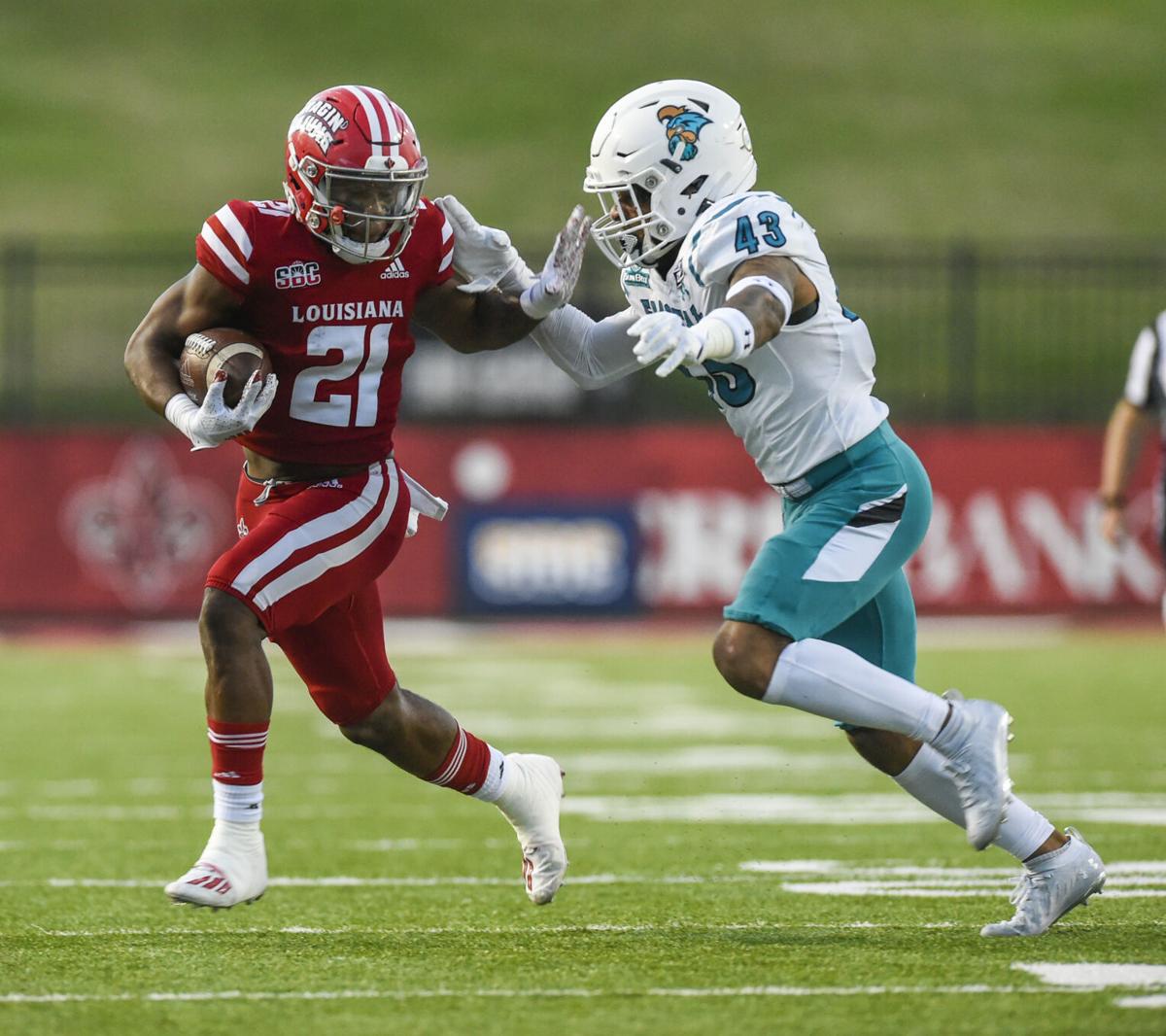 UL running back and kick return specialist Chris Smith (21) and the Cajuns' special teams will be meeting one of the top kicking games around as well in UTSA on Saturday. 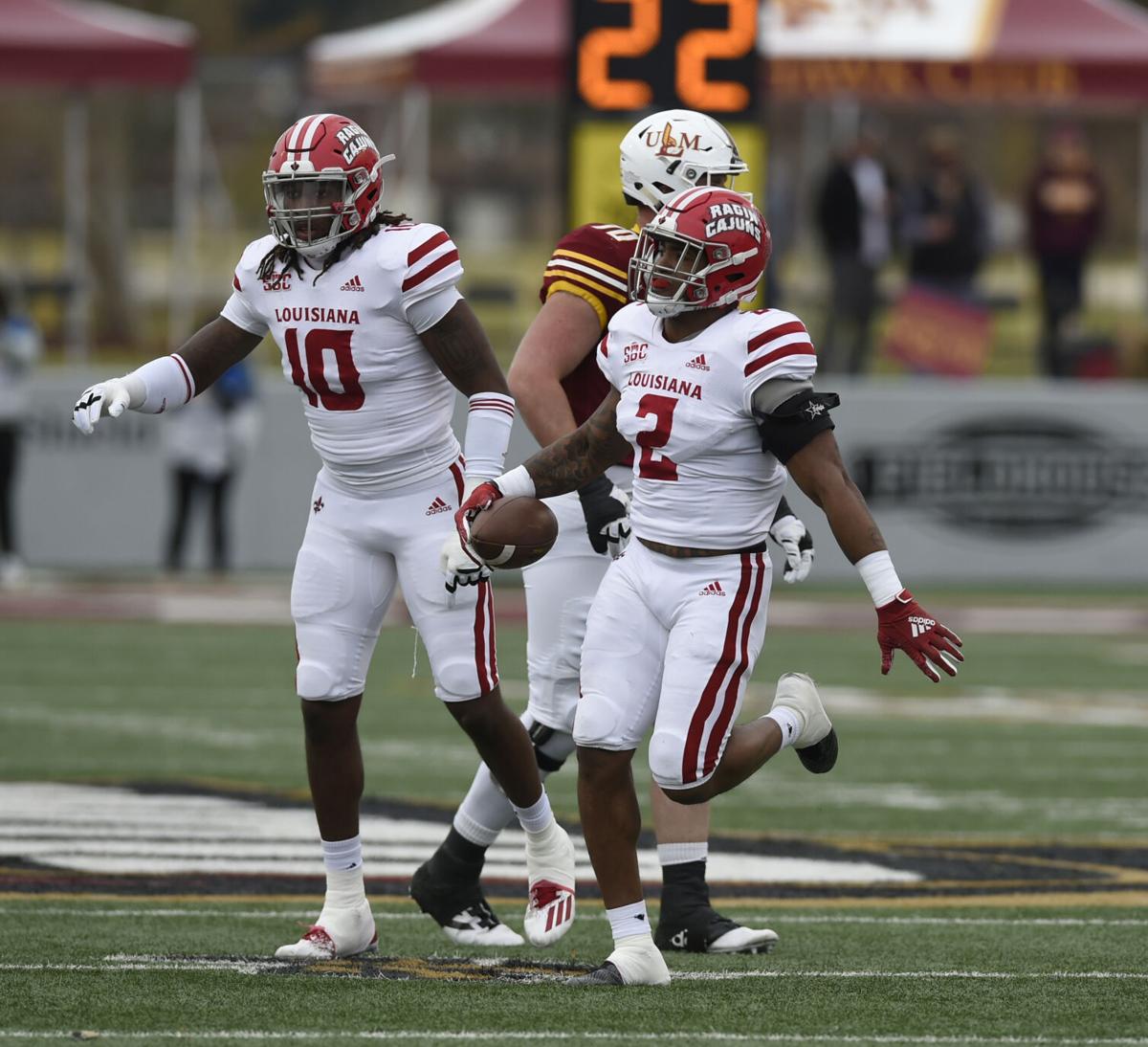 UL defensive standouts Andre Jones (10) and Lorenzo McCaskill (2) will be focusing on UTSA running back Sincere McCormick on Saturday. McCormick is currently the nation's second-leading rusher with 1,345 yards.

UL running back and kick return specialist Chris Smith (21) and the Cajuns' special teams will be meeting one of the top kicking games around as well in UTSA on Saturday.

UL defensive standouts Andre Jones (10) and Lorenzo McCaskill (2) will be focusing on UTSA running back Sincere McCormick on Saturday. McCormick is currently the nation's second-leading rusher with 1,345 yards.

In his first statement upon learning the No. 16-ranked Ragin’ Cajuns would be playing UTSA in the First Responder Bowl on Saturday, UL coach Billy Napier immediately brought up his familiarity with Roadrunners’ first-year coach Jeff Traylor.

Napier’s recruiting trails in the past crossed paths with Traylor as a high school coach in Texas.

Listen to Traylor’s responses to questions from the media this week and it’s not difficult to imagine why these two coaches hit it off pretty well.

Napier’s just hoping his three years of building UL’s program trumps Traylor’s one season when the two teams meet at 2:30 p.m. Saturday at Gerald J. Ford Stadium in Dallas in a nationally televised game on ABC.

“That’s what our challenge is as a team,” said Traylor, who tested positive for COVID-19 on Wednesday and won't be attending the game. “In six months, can we catch up on three years?

“You can tell they’re just a very veteran team that’s used to winning.”

Indeed, the Cajuns are 9-1 in search of the program’s first successive double-digit-win seasons after going 11-3 last season.

The Roadrunners are 7-4 and looking for the program’s first bowl win with offensive coordinator Barry Lunney serving as the interim head coach.

“I think it’s going to be about us playing with effort, toughness, discipline, really good fundamentals, I think we’ve got to communicate well and we’ve got to go in and be tough-minded and have the same resolve we’ve had this year,” Napier said. “Expect this thing to be a four-quarter game. We’ve got a lot of respect for UTSA certainly having a lot more time to study them.

“They’ve got an identity, a blueprint and a plan to win. That’s very evident in all three phases.”

Traylor said he’s been preaching 'the triangle' all week in practice … known by others as 'the process.' Traylor’s triangle is essentially three core beliefs — physical defense, running the ball and playing great special teams.

“When you run the ball tough, it sends a mindset,” Traylor said. “It’s a physical, mental mindset this team will not go away. In the fourth quarter, they’re still going to be pounding on us.

“We say it all the time, a champion has the ability to play one play longer than his opponent. At some point, everybody quits. Can we push off our quitting point longer than the other team? That’s what defines what a champion really is.”

Those two philosophies play out in different ways personnel-wise. For the Roadrunners, it starts with sophomore running back and Conference USA Player of the Year Sincere McCormick, who is the nation’s second-leading rusher with 1,345 yards and 11 scores on 226 carries.

For the record, Iowa State’s Breece Hall is the leading rusher with 1,436. UL’s defense limited Hall to 106 yards on 20 carries in the season opener.

“It couldn’t happen to a more humble young man,” Traylor said. “If you watch us practice, there’s no way in the world you would pick that he’s the conference player of the year, because he practices so hard. You would think he’d be over there with his helmet and shoulder pads off getting ready for the ball club … that’s not Sincere McCormick. He works his tail off every day, every day. He is the epitome of what our culture is all about.”

McCormick, who rushed for 251 yards in the last game vs. North Texas, quickly got UL’s attention.

“Big, physical and has finishing speed, which I think makes him unique,” Napier said. “Overall, they’re committed to the run game, they’ve got a good back and he’s had a lot of success. There’s no question here that a big part of the game is you’ve got to be ready from a mindset standpoint to win the line of scrimmage, play well on the edge and the secondary has to tackle well when he (McCormick) does get loose.”

UTSA also features a dual-threat quarterback in Frank Harris, who has thrown for 1,422 yards and 10 touchdowns and run for 437 more and eight scores.

“This guy is a dynamic athlete that can make plays with his feet,” Napier said. “It’ll be part of the game, part of the variables in terms of execution and winning and we certainly have worked hard on it.

“When you’re playing these guys, it’s a big part of the formula to win the game. All areas in the read game, his ability to escape, extend and scramble.”

The matchup also features two top-notch special teams units. UL’s Chris Smith is among the nation’s top kickoff return specialists with a 27.2-yard average and two scores, while UTSA sports a kicker in Hunter Duplessis (16-of-18 on FGs) and punter in Lucas Dean with the fourth-best average nationally (46.3).

“They’ve got great specialist players,” Napier said. “I think they’re playing with effort. Overall, they’ve got good team speed. I think they’re a physical team, a tough team, so the combination of those things make them good in the kicking game.

“We certainly take pride in that part of our team and it’ll be one of the critical matchups in the game.”

Both teams are coming off long layoffs. UTSA hasn’t played since Nov. 28, while the Cajuns last played at Appalachian State on Dec. 4.

“It’s a fine line,” Traylor said. “Having a fresh team, guys with a good mindset, healthy at the risk of maybe not being as sharp and not as conditioned. We were really playing great football at the end there in November. We were hitting our stride.

“It’s just a fine line we’re all having to balance right now.”

“We’re ready to play,” Smith said. “We’ve moved on past the Coastal Carolina game. It is what it is. We’re getting ready for UTSA. They’re a pretty good team.