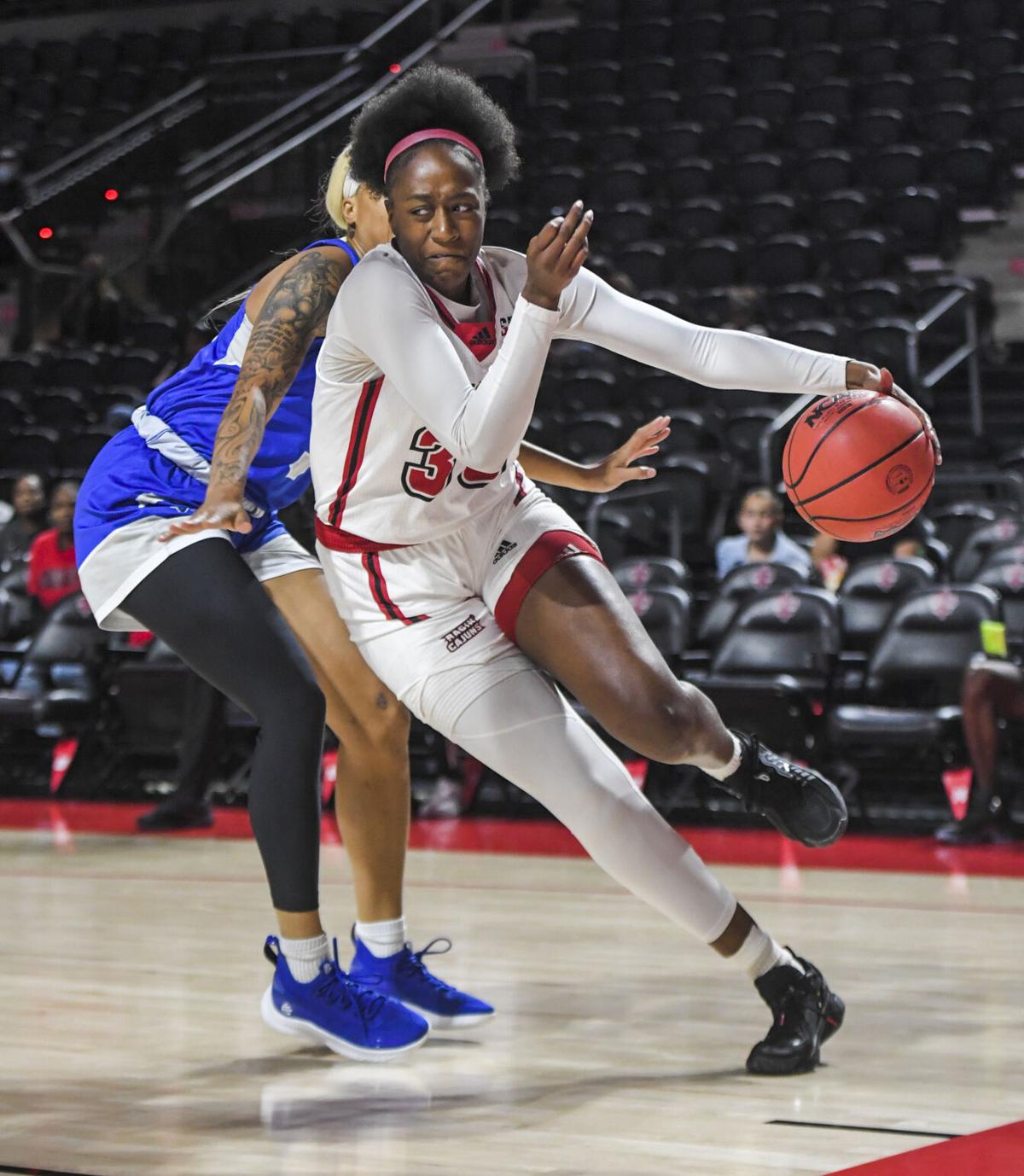 UL forward TyÕReona Doucet (35) drives to the basket past UNO defender Nahja Scott, left, during their NCAA womenÕs basketball game at the Cajundome on Saturday, November 20, 2021 in Lafayette, La.. 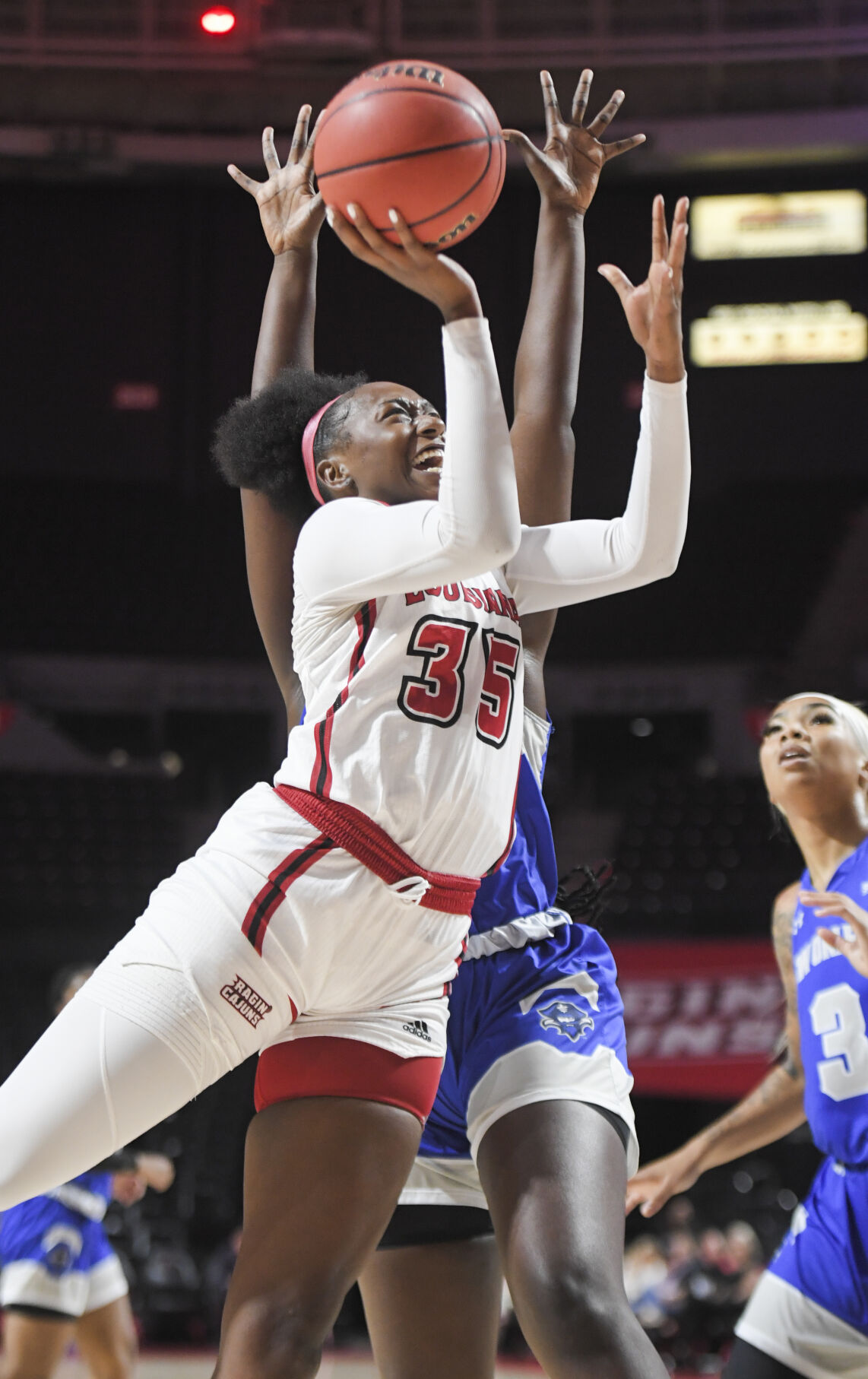 UL forward Ty'Reona Doucet (35) shoots for a bucket inside during the Cajuns' home win over New Orleans on Saturday.

UL forward TyÕReona Doucet (35) drives to the basket past UNO defender Nahja Scott, left, during their NCAA womenÕs basketball game at the Cajundome on Saturday, November 20, 2021 in Lafayette, La..

UL forward Ty'Reona Doucet (35) shoots for a bucket inside during the Cajuns' home win over New Orleans on Saturday.

Determined to start a new winning streak after its first loss earlier this week, the UL women's basketball team used a balanced scoring attack to dispose of UNO 64-45 at the Cajundome on Saturday.

Ten different Cajuns got into the scoring column. Alicia Blanton led with 12 points, followed by Lanay Wheaton and Ty Doucet with 11 and 10 points.

UL (3-1), which never trailed, set the tone with its defense. The Privateers (1-3), who shot only 1 for 13 from the field in the first quarter, turned the ball over on their first possession when the shot clock expired.

"I thought it was good, especially in the first quarter," UL coach Gerry Brodhead said of the defensive effort. "We maybe stayed in the press too long, and they started hitting some three-pointers."

After falling behind 8-2 in the first quarter, UNO climbed within 11-9 on a three-pointer by UL transfer Jomyra Mathis at the 8:25 mark of the second quarter.

Later in the second, Mathis hit another three that brought the Privateers within 21-18, but she picked up her third foul a few moments later and eventually fouled out with nine points.

In the final five minutes of the second quarter, UL used a 15-1 run to build a comfortable 36-19 lead at the half. The Cajuns also scored the first five points of the third quarter. A minute later, Wheaton dished an assist in the paint to Ashlyn Jones that pushed the margin to 44-21

"In the first half, we kept the turnovers down to four, which was good," Brodhead said. "But we started substituting people in and out and ended up with 17 turnovers, which is not what we're looking for.

"And our free throw shooting … we're really working on making free throws. It looked like we were getting better at it, but to shoot 13 of 24 from the line is not what we were looking for."

Destiny Rice finished with eight points on 3 of 4 shooting from the field and added two rebounds and two steals.

"I really like Destiny Rice," Brodhead said. "She controls the tempo. When she comes out of the game, we get a little more chaotic. Against the press, she does such a great job of breaking it. I'm always pleased with her."

Although the Cajuns struggled from the free throw line, Doucet sank 4 of 5 and grabbed six rebounds with two assists and a block.

"We have to get Ty Doucet going," Brodhead said. "Brandi (Williams) not being here hurt us a little bit, but it gave somebody else an opportunity."

Williams (bone bruise) is expected to return to practice Monday or Tuesday, said Brodhead, who is optimistic that the junior guard will be cleared to play at Southeastern Louisiana on Wednesday.

With Williams sidelined, Blanton got the start and the 5-foot-9 junior from Richmond, Texas, scored a team-high 12 points with four rebounds while going 1 for 5 from the free throw line.

"Alicia Blanton did alright," Brodhead said. "I wasn't pleased with her free throw shooting. She's a lot better free throw shooter than that, but she looked a little nervous as a freshman coming in as a starter with no warning.

"We played with a lot of different people, and we tell them they better start getting on board with how we want them to play, or they're not going to play."

Wheaton hit 5 of 8 shots from the floor in a little more than 17 minutes of action.

"I thought Lanay Wheaton did a good job getting to the rim, but she has to get a little more comfortable with what we're trying to do defensively," Brodhead said. "She's a transfer who we think has a lot of potential."