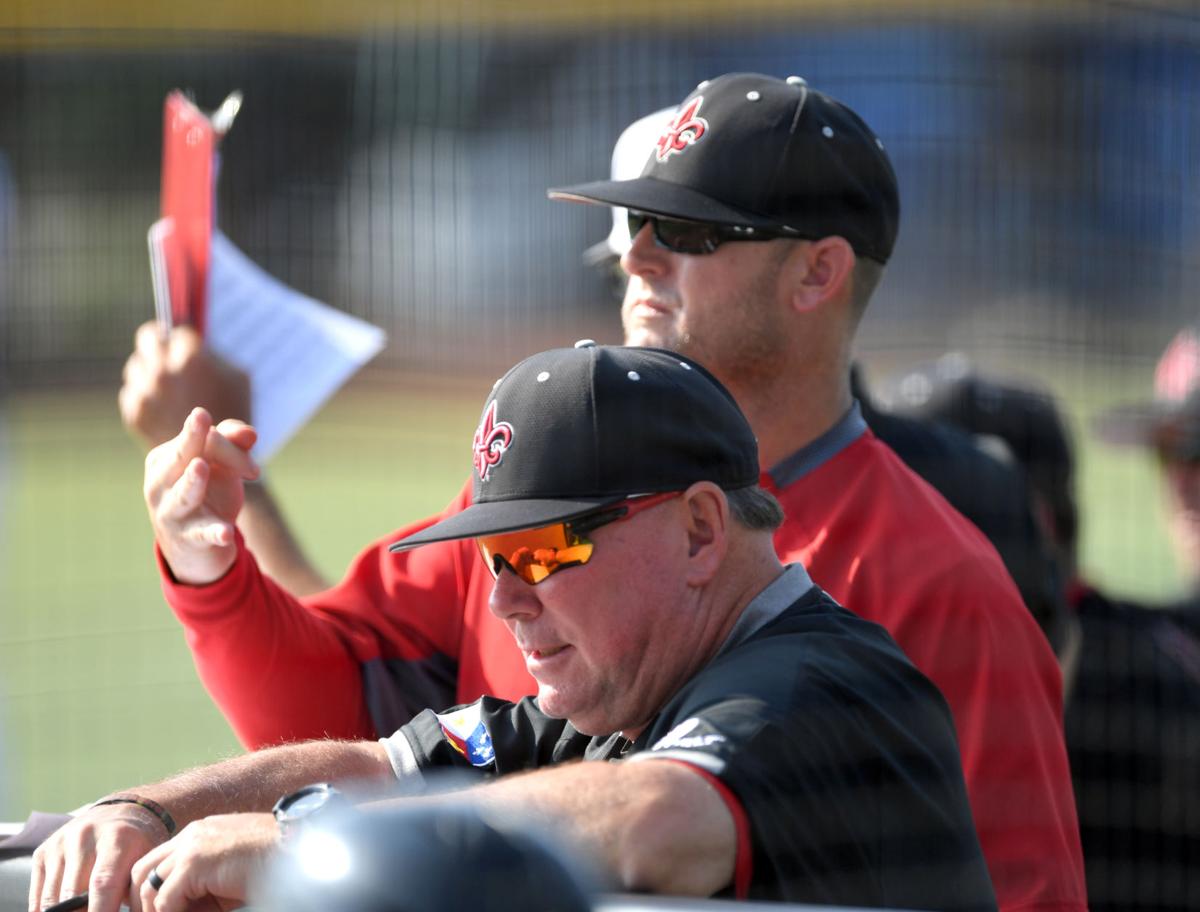 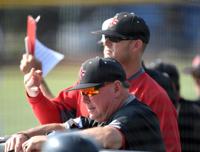 UL head coach Tony Robichaux, bottom, and assistant Daniel Freeman work from the dugout during the Cajuns final game of the season against Troy in the Sun Belt Conference tournament. 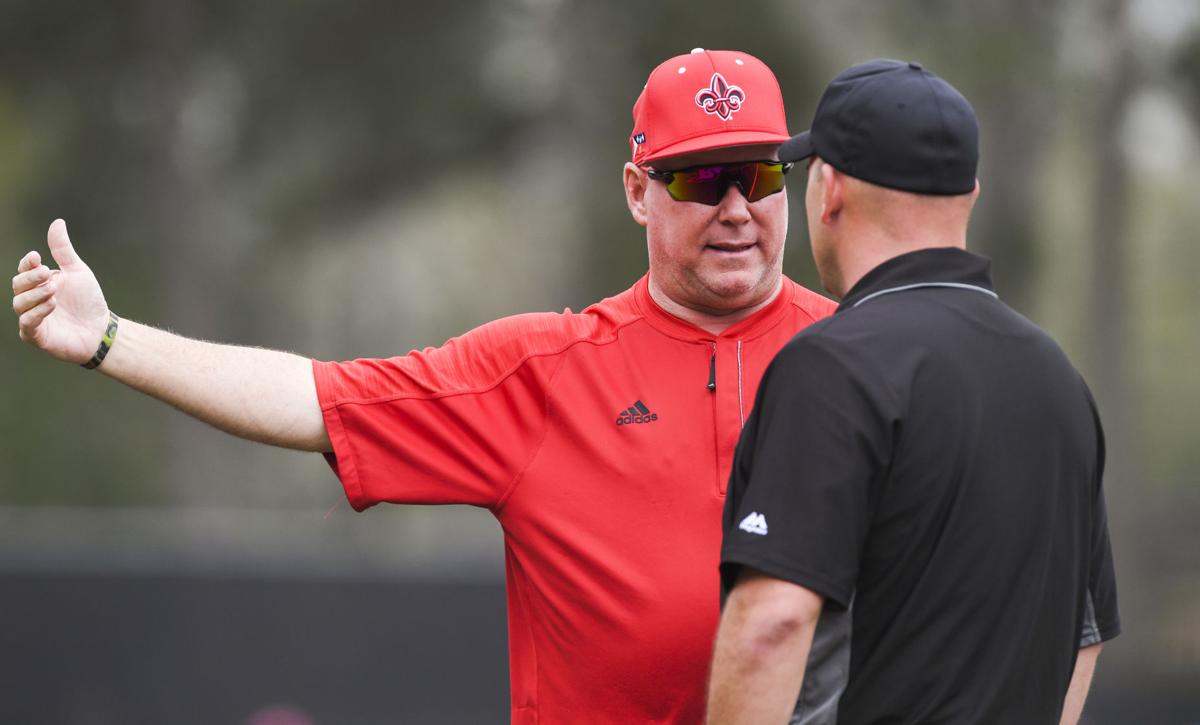 UL head coach Tony Robichaux, bottom, and assistant Daniel Freeman work from the dugout during the Cajuns final game of the season against Troy in the Sun Belt Conference tournament.

(Editor's Note: By all standards, the 2018-19 athletic school year was a disappointing one for many UL Ragin' Cajuns programs. This is the ninth of a 10-part series that both reviews the ups and downs of last year's season in each sport and previews the prospects for the coming school year.)

In his 25 years of leading the UL Ragin’ Cajuns baseball program, it’s not like coach Tony Robichaux has never endured rough stretches.

Sprinkled in between his 18 winning seasons and 12 NCAA regional appearances have been some worrisome times.

Each time, however, Robichaux and his program has responded.

(Editor's Note: By all standards, the 2018-19 athletic school year was a disappointing one for many UL Ragin' Cajuns programs. This is the 10t…

The Cajuns finished 10th in 2012, followed by three first-place showings and a third over the next four years.

In 2001, the Cajuns finished a shocking seventh place in the Sun Belt after reaching Omaha the year before, followed by a solid second-place showing and NCAA regional campaign the next spring.

Somehow, though, the weight of this spring’s 28-31, 15-15 season that left the Cajuns eighth in the overall Sun Belt standings just seemed heavier.

“You’ve got the social media side of it today,” Robichaux said. “If you have a tough year 15 years ago, I don’t know if many people found out about it.

Softball was UL's best team in 2018-19, but no coach more upset than Gerry Glasco

(Editor's Note: By all standards, the 2018-19 athletic school year was a disappointing one for many UL programs. This is the first of a 10-par…

UL Director of Athletics Bryan Maggard is confident in the program’s ability to once again rebound from a frustrating stretch by vaulting back to the top of the league.

“The man has forgotten more about baseball than most of us will ever know,” Maggard said. “I have a tremendous amount of faith in him. I’m excited to sit with him and delve into what we need to do to get you back on the winning track and be as successful as he can be.”

It was a spring overloaded with injuries and constant unexpected setbacks for the Cajuns. But adding his assurance that the program was still in good hands was how well the team’s chemistry remained through the ups and downs of the season.

“There’s so much that can be said about holding a team together,” Maggard said. “In sports, we’re going to face adversity. I feel like sports is a microcosm of life overall. There are highs and there are lows. There’s opportunities and there’s successes and there’s failures. That epitomizes coach Robichaux’s leadership — not his coaching, but his leadership. His team is a true reflection of him as a man and as a coach.

"I think that speaks volumes when you can take a group of 18 to 22-year-old young men and have the type of season they did and yet keep them together and keep them focused, keep them calm and make sure they represent our university and our athletics program at the highest level, win or lose, that’s pretty special.”

The bulk of the problem with the 2019 club was pitching. The Cajuns were counting on several key arms to return well from injuries. But from Gunner Leger to Dalton Horton to Brandon Young, it didn’t transpire.

The example that perhaps more epitomized the frustrating season was junior right-hander Jack Burk. Also rebounding from an injury, Burk’s first two outings looked so bad that even the coaches began to wonder what type of role the Jesuit of New Orleans product would be able to play.

Yet by the stretch drive, Burk had emerged as Friday night starter for the Cajuns. But just as Robichaux began to count on his consistency, Burk was lost for the season going into the final regular season weekend.

“I’ve just never seen anything like this before,” Robichaux said periodically throughout the season.

“In mid-majors, so much of it is about timing,” Robichaux said. “That team (2014) with (Michael) Strentz and (Grant) Conrad and all of those guys, it was just such good timing. We had some starting pitching. We were just a little light in the bullpen. It’s so hard today to time everything up.

“Like this year, I wish we would have had better pitching with these hitters. Next year, we’ll lose some of those hitters, but we’re going to be bringing in some good arms. You try to get it synced up as much as you can, but it’s hard to do.”

Looking forward to next season, Robichaux is confident the pitching will return, but someone will need to replace the likes of Hunter Kasuls, Todd Lott, Orynn Veillon, Handsome Monica and Daniel Lahare in the lineup.

“One good thing is, we’re going to be able to get back out and pitch again,” Robichaux said. “That’s the biggest thing that hurt a lot of people in our league this year — pitching. Hopefully we can build a bullpen with the guys who are going to return. They’ll have a year of experience under their belts. The big thing would be to build a quality bullpen. I think we’ll have enough arms to do it.”

Robichaux and his staff have high hopes for a stellar incoming signing class, but the few seasoned returning players will need to perform as well.

“The guys coming in to play first base are going to help,” Robichaux said. “We’ve got good experience coming back. We’ve got to have guys come up and have good years. Guys like (third baseman) Jonathan Windham and (catcher Sebastian) Toro. Those are critical guys. We need the returning guys to come back and have good years, especially the position players.”

Of the promising signing class, only pitcher Jason Nelson of Central Arizona College was drafted. So not getting killed by the pro draft was one break the Cajuns enjoyed on the heels of a season to forget.

“It’s been very tough, it’s not our standard, we don’t want to be here at all, but I appreciate what our guys had to play through all year,” Robichaux said. “We’ve got the four guys redshirting through injuries and they’ll be back, one of them’s our closer (Austin Bradford). I appreciate what this team had to play through. I’m not happy with where we are, but if you coach long enough you’re going to have some tough seasons. I’ve had an injury here and in there before in 31 years of coaching, but not six or seven guys go down.

“We will be getting some of those guys back. We played through Tommy John, broken foot, torn UCL, torn muscle in forearm, Gunner’s injuries, Kasuls down with a broken nose, all the other stuff. We’ve been through it a little bit. I appreciate the team for holding it together.”

Softball was UL's best team in 2018-19, but no coach more upset than Gerry Glasco

Volleyball coach Mazeitis-Fontenot develops plans to rebound in style on, off the court

(Editor's Note: By all standards, the 2018-19 athletic school year was a disappointing one for many UL programs. This is the second of a 10-pa…