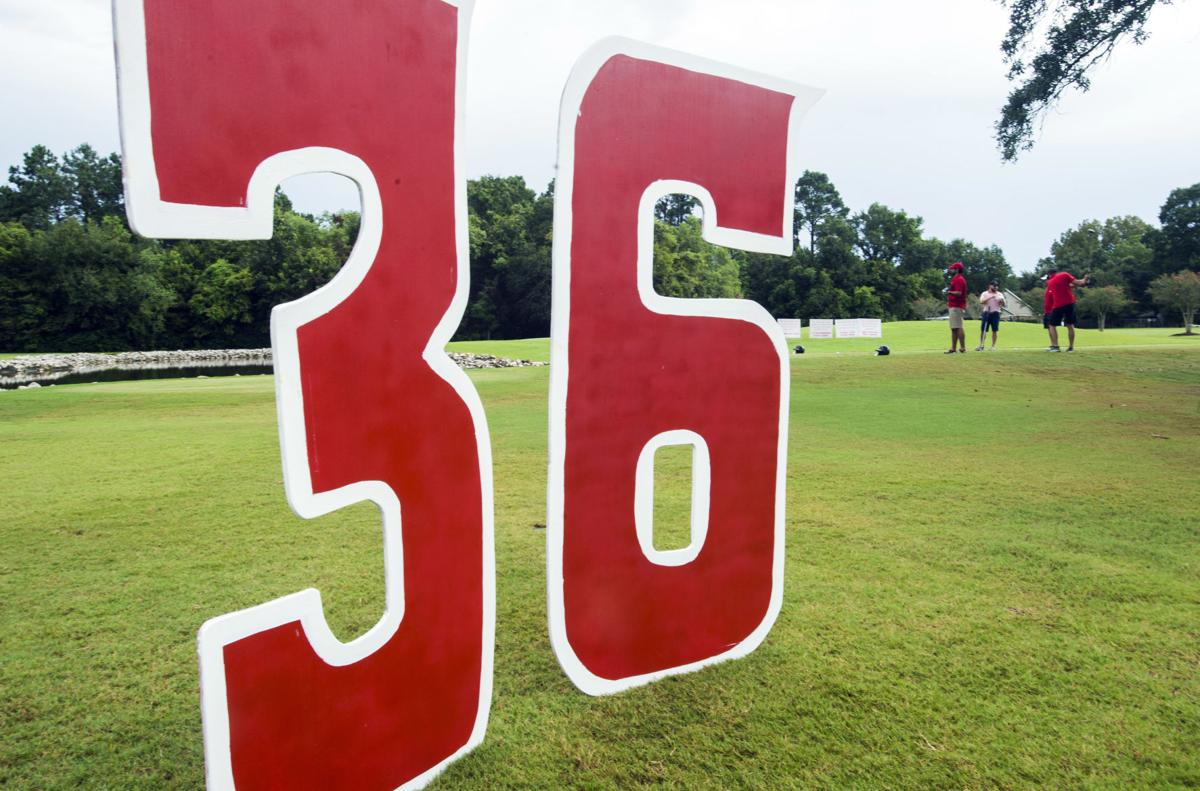 Late UL baseball Coach Tony Robichaux's jersey number is displayed near the first-hole tee box during The Robe, a golf tournmanent to honor the coach and raise money for his family, Friday, August 23, 2019, at Les Vieux Chenes Golf Course in Youngsville, La. 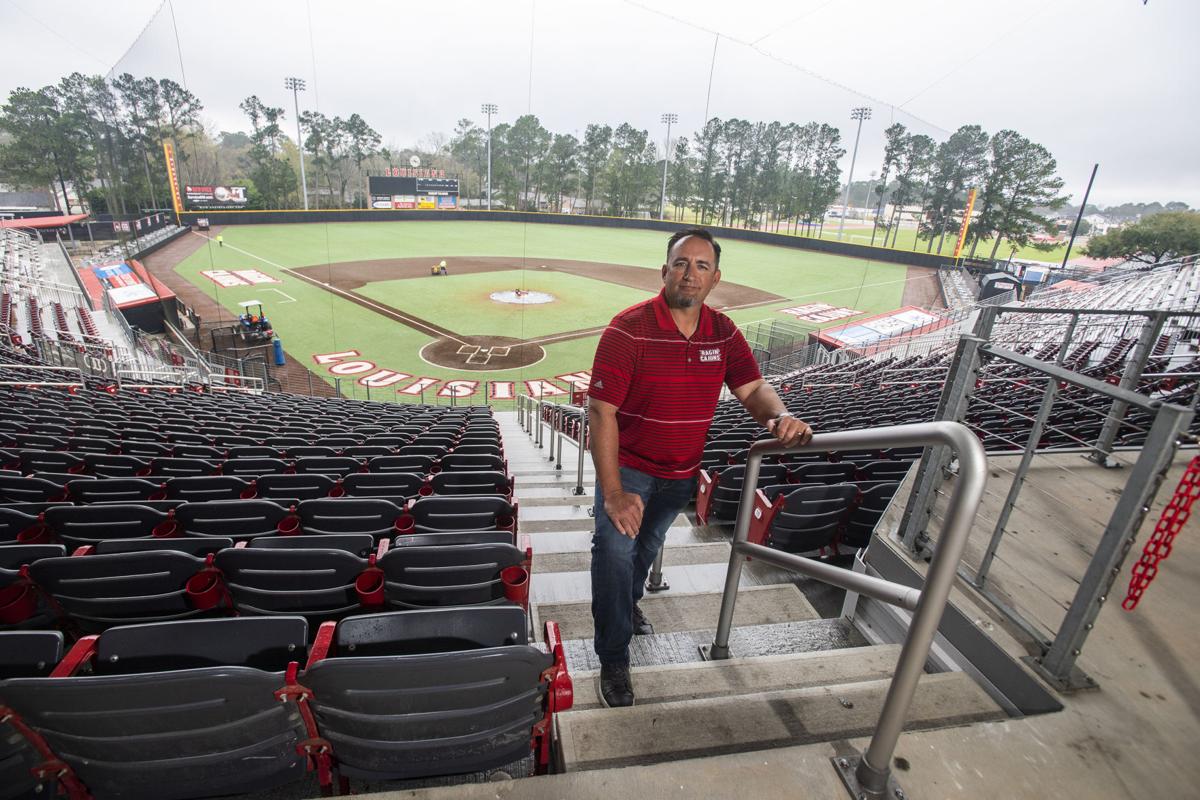 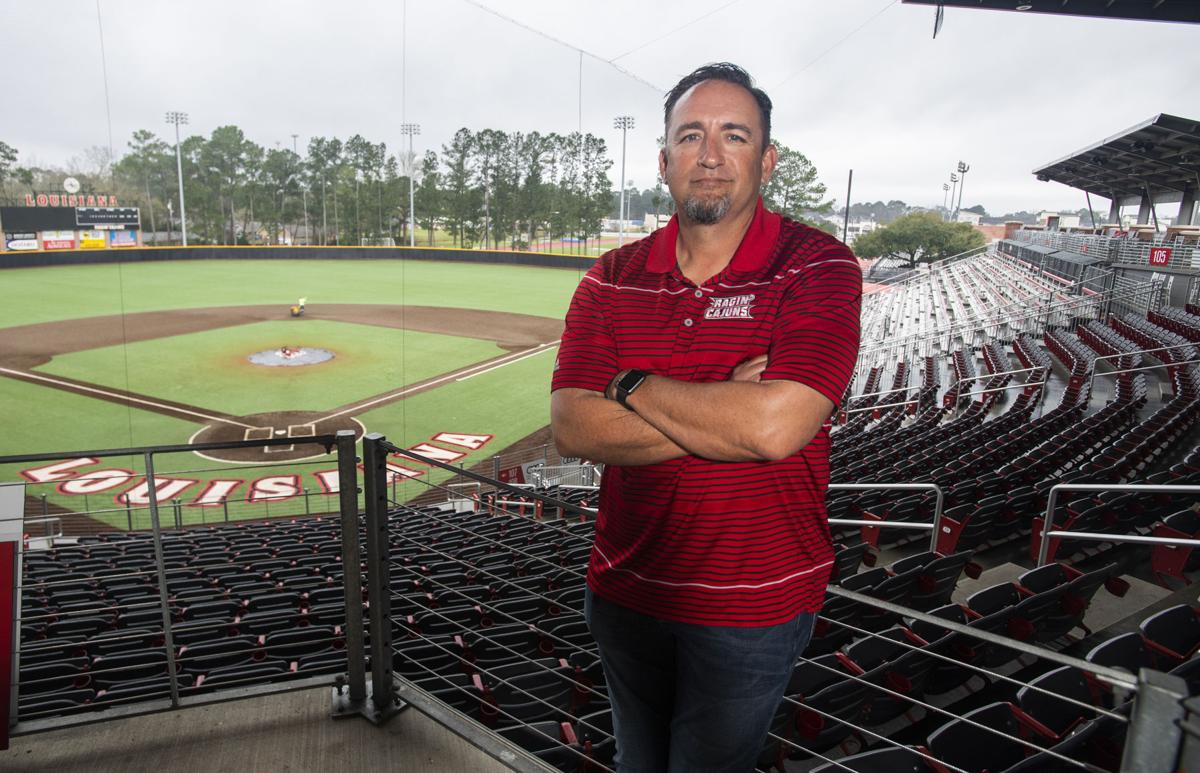 UL coach Matt Deggs takes over as Tony Robichaux's replacement beginning with the season opener for the 2020 season at 6 p.m. Friday against Southeastern at Russo Park.

Late UL baseball Coach Tony Robichaux's jersey number is displayed near the first-hole tee box during The Robe, a golf tournmanent to honor the coach and raise money for his family, Friday, August 23, 2019, at Les Vieux Chenes Golf Course in Youngsville, La.

UL coach Matt Deggs takes over as Tony Robichaux's replacement beginning with the season opener for the 2020 season at 6 p.m. Friday against Southeastern at Russo Park.

From the tearful opening-weekend ceremonies honoring the legacy of longtime UL baseball coach Tony Robichaux until the final game of the season, the 2020 Ragin’ Cajuns baseball season will be like none other in the program’s history.

It will be a combination of a team bonded by tragedy determined to build a brighter future while somehow going all out to cherish the program’s most significant figure.

There’s got to be a Robeism somewhere in there.

“Dang right, we want to win for coach Robe,” new Cajuns coach Matt Deggs said at a preseason news conference about the program’s first season since Robichaux’s death on July 3. “We ain’t going to let coach Robe down. Coach Robe built this.

Opening weekend will feature Deggs' debut as head coach, the retiring of Robichaux's No. 36, and, on Saturday, the unveiling of a statue of Robichaux that was purchased by former players.

Robichaux's family will be there. And it will be the first time in decades that he will not be in that homefield dugout on opening weekend.

But Matt Deggs will be.

Incredibly, the wisdom behind that statement has nothing to do with this situation.

It’s unlike any other.

Because of who Deggs is and was, there really was no transition in a situation that seemingly begged for one.

Because of how well the two worked together when Deggs was an assistant from 2012-14 — including being ranked No. 1 in the country for a stretch during the 58-win campaign if 2014 — there won’t be any awkward moments when a different name is announced as the Cajuns’ coach for the first time in 25 years.

Because of the role Robichaux played in bringing Deggs’ coaching career back from the dead, his replacement runs head first into the biggest coaching role of his career with no fear.

“Zero,” said Deggs, who was fired as an assistant coach at Texas A&M in 2010 for alcohol abuse and hired by Robichaux at UL two years later. “I was dead and he saved me. Every day for the rest of my life is gravy. You’re looking at a guy that is unafraid to crash and burn at whatever he does. Just know this, coach Robe will get absolutely every ounce of what I got.”

Somehow, replacing an icon isn’t supposed to be that easy.

There just was never a more perfect fit for the job.

The winningest coach of all time could have been available and the transition wouldn’t have been as smooth from the fall season until opening night as this one.

In the team's introductory news conference of the season, there was no uncertainty in the players' voices about moving on without the program's longtime leader.

Instead, they were talking about winning the national championship.

“We’ve got a lot of passionate kids out there,” Deggs said. “Coach said it all the time, ‘Passion outdoes logic.’ When the kids’ passion starts to get up around the coaches’ passion, it’s a lot of fun.”

Beginning at 6 p.m. Friday against Southeastern Louisiana at Russo Park, the games begin and we’ll soon discover how quickly Deggs can help muster up some more magic on Tigue Moore Field.

“Coach Deggs deserves all the success that’s coming his way,” junior shortstop Hayden Cantrelle said. “His story is great. Him being able to step in and being able to lead us from Day 1, I feel like he deserves everything in the world.

“We’re in great hands and I’m looking forward to see how he handles it with us. He’s bounced back from different problems he’s had in his life and he’s definitely shown success at other programs. Being that he gets to come back and be our leader, it sounds like a storybook kind of story. We’re super excited about it.”

It’s not that Deggs is a carbon-copy version of his former mentor.

“Coach Robe and I were opposites,” Deggs said. “He was a very patient, caring man that had time for everybody. I learned a lot of good traits from coach in those respects.

“I’m kind of the opposite. I’m very intense. I want stuff to go down right now. I expect the absolute best out of everybody.”

What they are is equally passionate and masters of motivation.

“It’s his game and this is his program,” UL senior pitcher Caleb Armstrong said of Robichaux. “It’s a big game. We definitely owe it to him, but we owe the entire season to him.”

By the same token, Armstrong said the team has quickly become attached to its new coach.

“Just as much,” he said. “Love coach Deggs just as much as I love coach Robe. As similar as they are, they’re a lot different. It’s great to get some variety. I wish we could have them both. I think that would be really, really dangerous.”

“So if I have to empty a Sunday guy to win a Friday game, I’ll do it, because we have a couple guys behind him that I have no problem starting. I’m a firm believer that’s how you win tournaments and regionals. You do whatever it takes to win the first one. You can’t sweep unless you win the first one.”

Listen to Deggs for a few minutes and you’ll be convinced of his convictions about this year’s roster.

“(Assistant coaches) Jake Wells and Jeremy Talbot did an incredible job of recruiting this team,” Deggs said. “This team is SEC balanced from the pitching to the defense to our athleticism to our ability to swing the bat. They just did an incredible job. Jeremy worked relentlessly on the road and Jake complemented him very well.”

Deggs plans to utilize that talent to its fullest … and with as much flash as possible.

He’s much more of a showman than Robichaux ever was.

“I’m not a big win-loss guy,” Deggs said. “What I worry about is the product that we put on the field. Are the fans getting their money’s worth? Are we exciting? Are people going to pay to watch us fight? This is a team that I’m really excited about in those ways.

“You pay $20, we’re going to get you $25 worth in your experience and you’re going to see a bunch of guys fly around, have fun and compete.”

On paper, the Cajuns — 28-31 a year ago because of a rash of injuries — should be much deeper on the mound this spring with lots of “interchangeable parts” offensively and defensively.

“We’re going to play what works,” Deggs said. “You could see a kid in center or in right and look up and he’s in first base late, or he’s hitting three today and eight tomorrow. A lot of it is the mesh and the match and what’s lights a spark and ignites a fire.”

He does it with a different facial expression than Robichaux, but Deggs also has a unique way of relaying his feelings.

“We’ve got 33 guys, one of them is going to redshirt, so we’ve got 32, and everybody understands their job duty or function,” Deggs said.