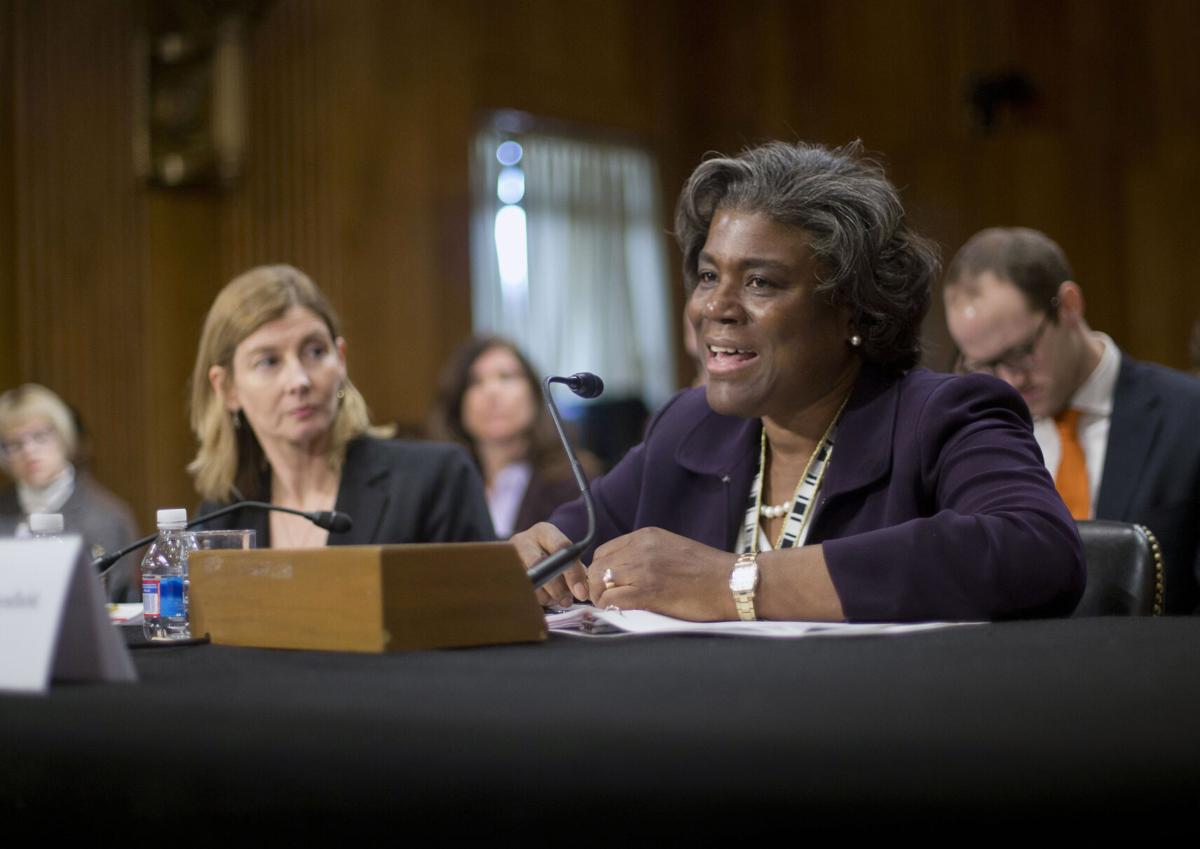 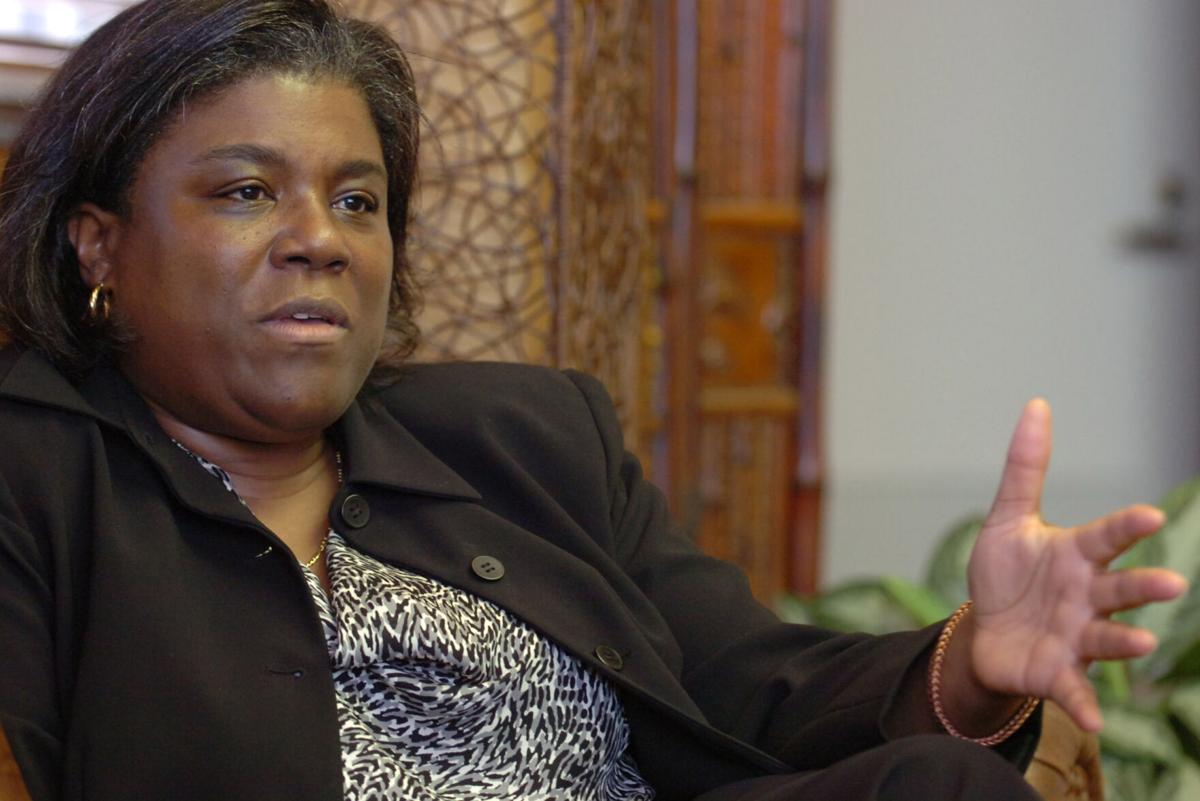 Linda Thomas-Greenfield, a native of Baker, on March 3, 2008. She has been picked to be ambassador to Liberia by President George W. Bush. 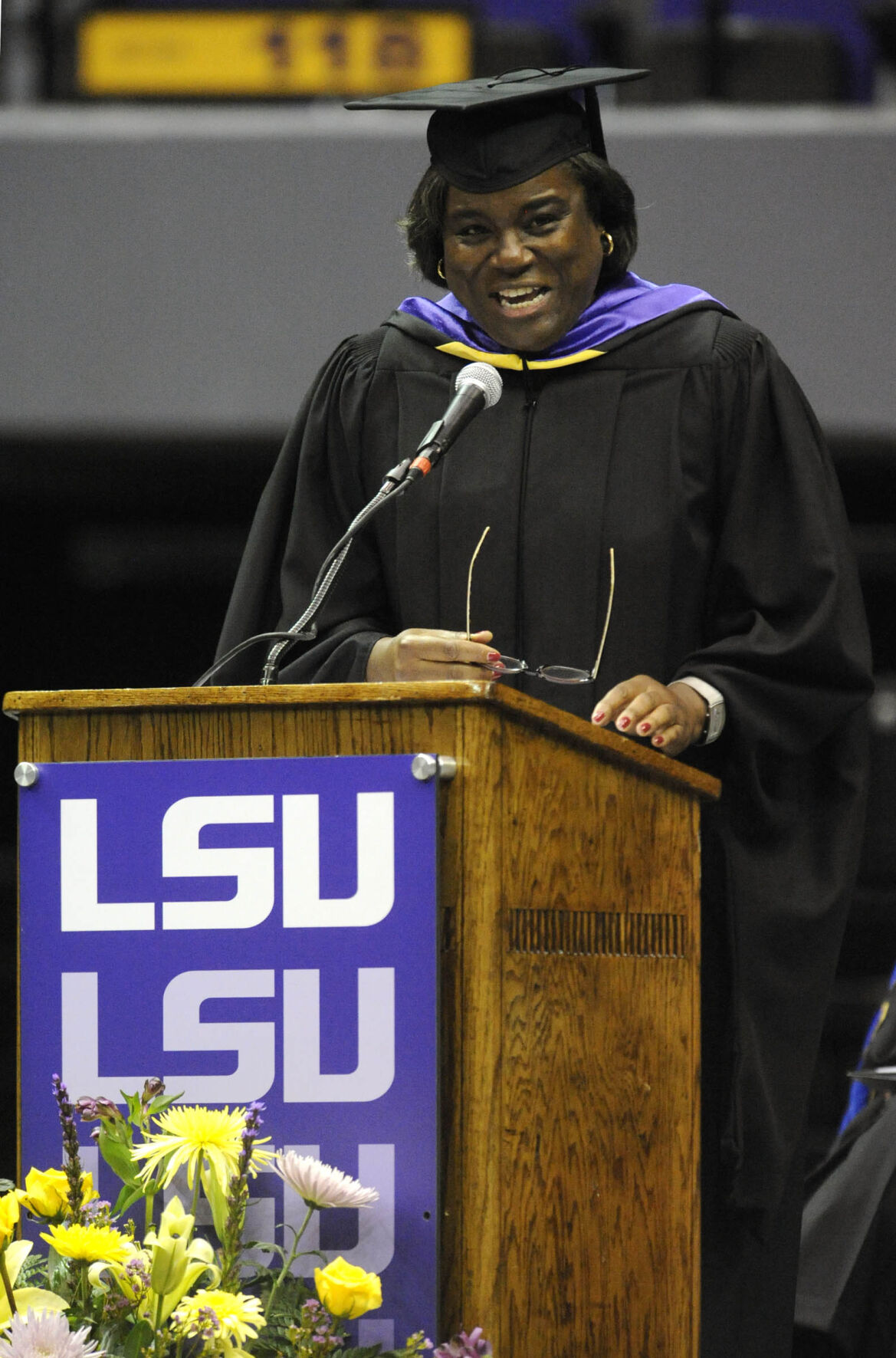 Linda Thomas-Greenfield, then Director General of the Foreign Service, delivered the commencement address to graduates during LSU's 2012 commencement ceremony at the Pete Maravich Assembly Center in Baton Rouge on Friday, May 18, 2012. 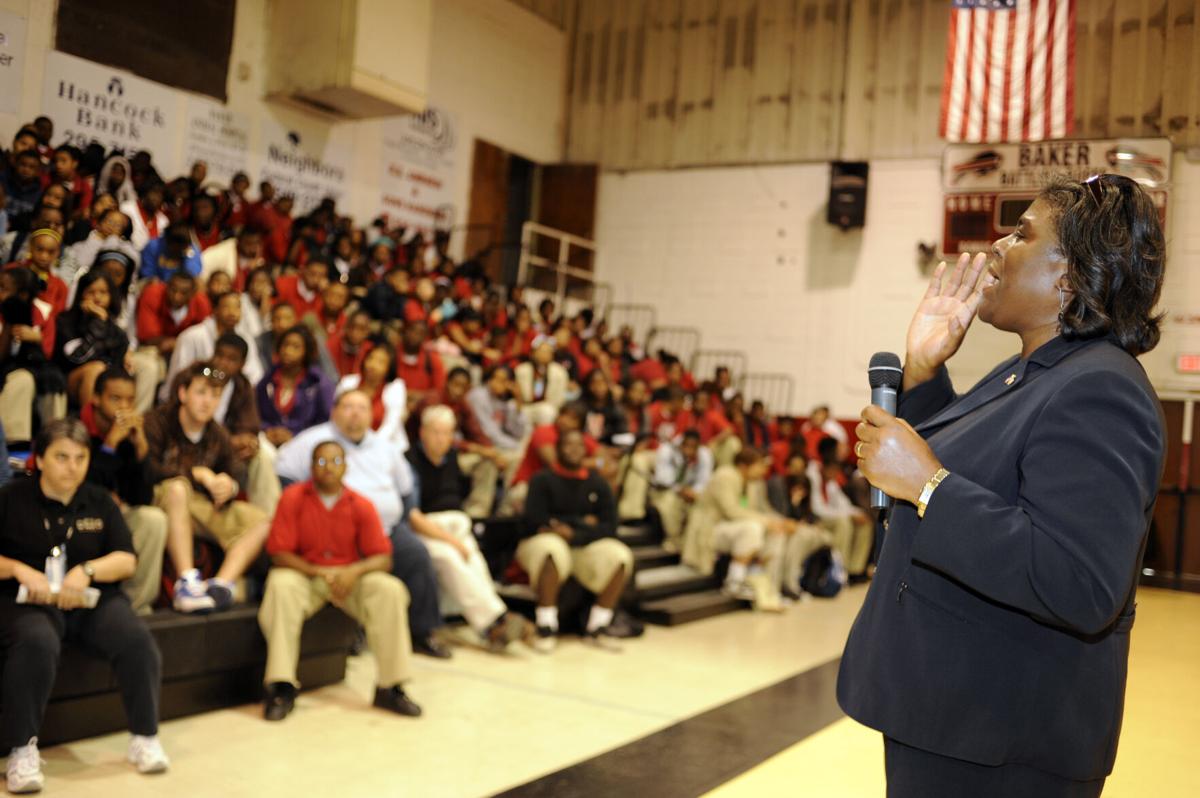 Linda Thomas-Greenfield gives a motivational speech to students at Baker High School Wednesday, April 22, 2009. Thomas-Greenfield encouraged the students to become proficient in English, learn a second language and set high goals for themselves. 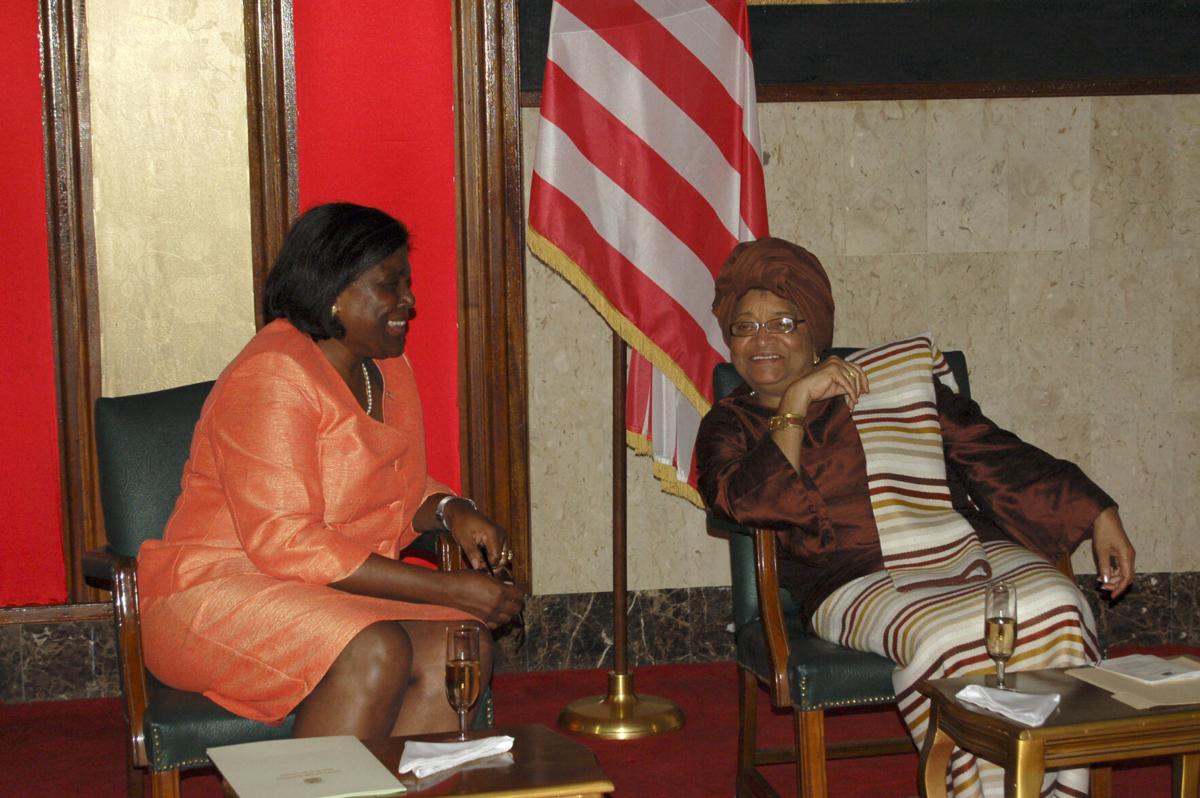 Linda Thomas-Greenfield, a native of Baker, on March 3, 2008. She has been picked to be ambassador to Liberia by President George W. Bush.

Linda Thomas-Greenfield, then Director General of the Foreign Service, delivered the commencement address to graduates during LSU's 2012 commencement ceremony at the Pete Maravich Assembly Center in Baton Rouge on Friday, May 18, 2012.

Linda Thomas-Greenfield gives a motivational speech to students at Baker High School Wednesday, April 22, 2009. Thomas-Greenfield encouraged the students to become proficient in English, learn a second language and set high goals for themselves.

President-Elect Joe Biden has tapped Baker native and LSU alumna Linda Thomas-Greenfield as the U.S. ambassador to the United Nations.

The job as the U.S.’s representative to the world body is one of the highest profile posts in American government. Her predecessors include Adlai Stevenson, George H.W. Bush, and Madeleine Albright.

Unlike most of her predecessors, Thomas-Greenfield has 35-years of service in the U.S. Foreign Service, including assignments in Jamaica, Nigeria, The Gambia, Kenya, Pakistan, Switzerland and Liberia.

She was in Rwanda in 1994 when genocide broke out and was held at gunpoint until she convinced her attackers that she was an American. She was also the top State Department official in charge of African policy during the Ebola crisis.

Within her foreign service career, she spent more than a decade working on refugee and migration issues. Thomas-Greenfield left the service in 2017.

“She will bring a diverse perspective and unique experience to the Cabinet, which will be invaluable to the president-elect and his national security and foreign policy team,” the Biden transition team emailed in a prepared statement.

Thomas-Greenfield’s selection also suggests the Biden administration is poised to give Africa more attention than had been the case during the Trump years.

“This appointment is an indication that we are not going to think of them as s***hole countries,” said Leo C. Hamilton, a college friend of Thomas-Greenfield who is now a partner in a large Baton Rouge law firm. “We are going to be much more concerned with their future and how much their future is intertwined with our future.”

Hamilton was a member of Harambe, an African American student group at LSU during the early 1970s, when he and Thomas-Greenfield were among the first wave of African American students enrolled at the previously all-white school. Hamilton recalls that Black students weren’t welcomed on a campus whose student body included white supremacist David Duke and fraternity members who openly harassed minorities. He adds that the atmosphere at LSU today is far more accepting.

The group arranged civil rights demonstrations on campus and marched to the State Capitol. Thomas-Greenfield took part, he recalled.

After earning her degree in 1974, Thomas-Greenfield went to the University of Wisconsin for her masters’ degree, then taught at Bucknell University in Pennsylvania before joining the Foreign Service in 1982.

Thomas-Greenfield later that year gave the commencement address at the LSU graduation.

Thomas-Greenfield grew up near the now closed Leland College, a historically Black higher education institution in the East Baton Rouge Parish town of Baker. She was the first person in her family to graduate high school, Northwestern High School in Zachary in 1970. Baker High School, at the time, was segregated. Her father and mother never made it past third and eighth grade.

“This lady works extremely hard,” said then Secretary of State Condoleezza Rice before giving the oath in 2008 making Thomas-Greenwood ambassador to Liberia. “Wherever there is hard work to be done, Linda is there.”

The assignment was crucial for the United States. Liberia was emerging from 14 years of civil war after President George W. Bush sent 20,000 Marines in 2003 to push out Liberian strongman, Charles Taylor, who was accused of orchestrating 20,000 deaths in the country. Emerging as a democracy, Liberia was governed by Africa’s first female president, Ellen Johnson-Sirleaf, who was elected in 2006.

During her four years of “gumbo diplomacy,” Thomas-Greenwood was named an honorary citizen of Liberia. The country, founded by free American slaves in 1820, at the time of her posting still lacked electricity throughout the country and had an unemployment rate of 80 percent. The trip in from the airport was on dirt roads.

Prior to the 2020 presidential election, Thomas-Greenfield wrote a guest column in The Advocate about the power of voting.

"Growing up in the bends of southeastern Louisiana, where I saw the fear wrought by the KKK and felt the humiliation of “Whites only” signs, helped shape me into the leader I am today," Thomas-Greenfield wrote. "It’s important to remember and honor the rich history that surrounds us no matter how far from the Mississippi we may be currently."

By all accounts, Thomas-Greenfield is an engaging conversationalist with demeanor so down home that people unaware of her resume wouldn’t peg her as a seasoned diplomat or high-ranking leader.

One of the foreign students she befriended during her LSU days was Dr. Albert L. Agard, originally from Guyana but now of Houston. When he visited  Thomas-Greenfield on a business trip to in Liberia, the talk was about the good old days and whatever happened to so and so.

He was invited to Thanksgiving dinner at the ambassador’s mansion overlooking the Atlantic Ocean. He recalls a traditional Creole meal with crawfish stuffing but also stewed cassava greens, cooked like spinach in palm oil and peanut butter – a favorite in Liberia.

The U.S. Senate is ready to begin Monday the voting process expected to install LSU alumna and Baker native Linda Thomas-Greenfield in one of …