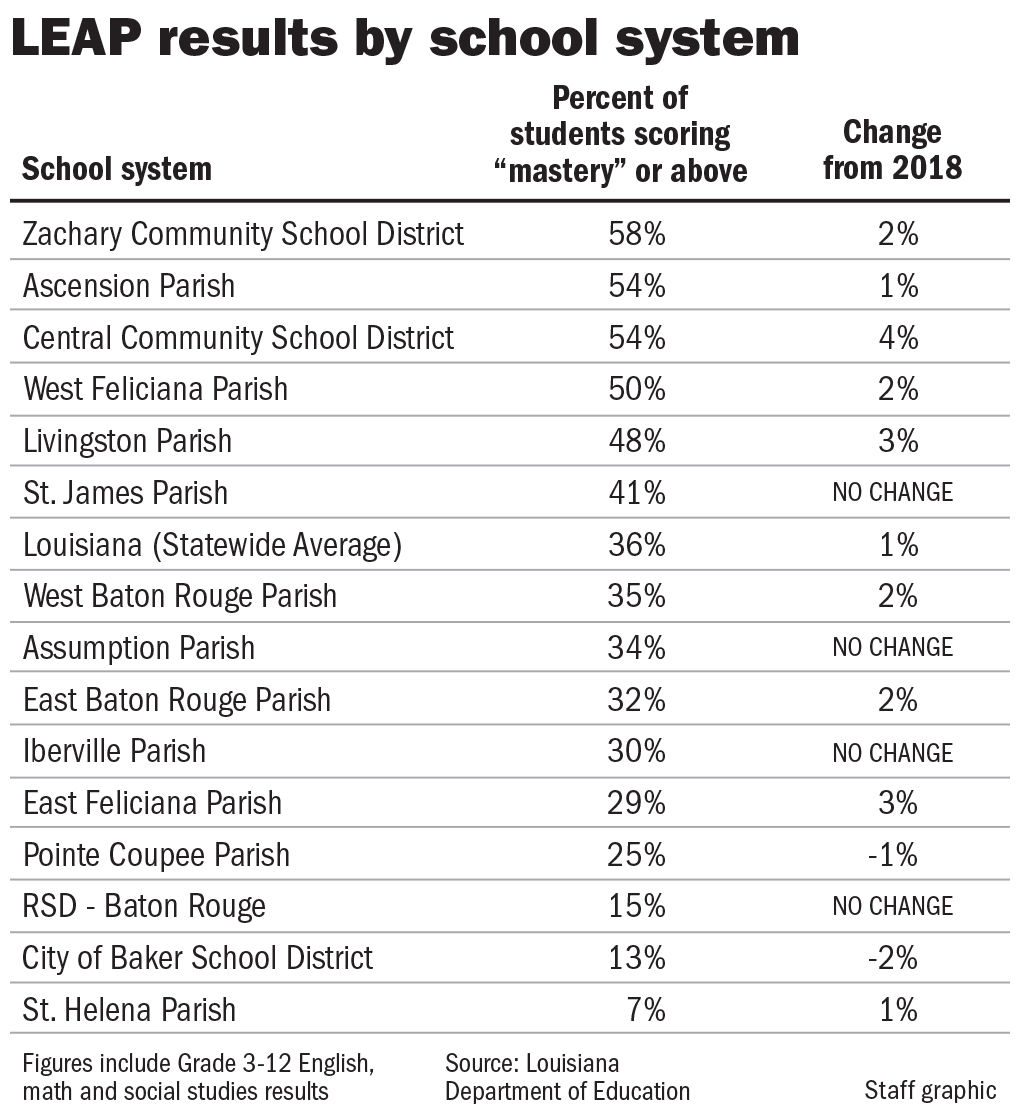 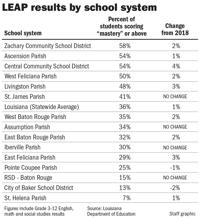 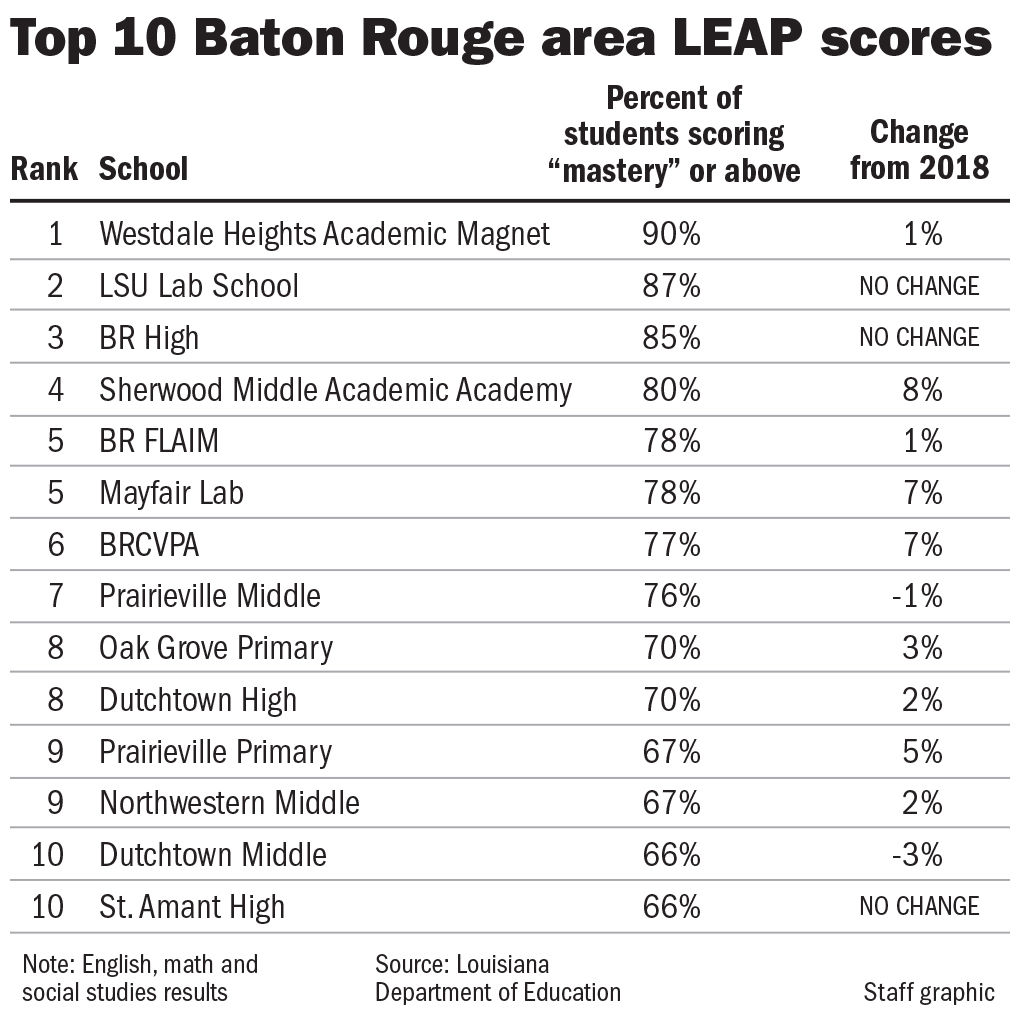 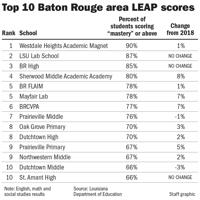 Zachary schools had the highest percentage of its students who achieved mastery level in three subjects given during the spring Louisiana Educational Assessment Program tests.

Ascension Parish and Central tied for second place, while West Feliciana Parish came in third. Those districts, along with Zachary, were the only public school districts in the state where at least 50 percent of their students demonstrated mastery in these three subject areas.

Livingston Parish also made the top 10, tying for fifth place with Plaquemines Parish.

With the exception of St. James Parish, all the rest of the public school districts in the capital region trailed the state as a whole in mastering these three subjects. They include East Baton Rouge, East Feliciana, Iberville, Pointe Coupee, St. Helena and West Baton Rouge parishes, as well as the city of Baker and schools in the state-run Recovery School District.

LEAP tests were given in grades 3-8 in April and May, as well as in five high school subjects taken in all high school grades. Students in fifth grade up take the tests exclusively on computers while students in third and fourth grade can take them with paper and pencil.

Also, the results released Thursday don’t include science. Those results aren't scheduled for release until August.

Among individual elementary, middle and high schools in the capital region, Westdale Heights Academic Magnet school performed best, with 90 percent of its students achieving mastery in English, math and social studies. It tied for fourth place in the state. Only seven other Louisiana schools performed better; four of those schools shared first place, with 95 percent mastery.

Thirty-five schools in the capital region had fewer than 10 percent of students achieving mastery in those same three subjects. Of the traditional public schools, Brookstown Middle was the lowest performing; only 3 percent of its students showed mastery collectively.

Central was the most improved district in the capital region, jumping from 50 to 54 percent mastery. East Feliciana and Livingston parishes show collective improvement of 3 percentage points.

Freshwater Elementary in Denham Springs was the most improved school in the state, upping its overall mastery rate from 43 to 60 percent. Only nine schools in Louisiana improved by 10 percentage points or more.

“Clearly our students continue to respond to the rigor and challenges set before them,” Livingston Superintendent Joe Murphy said in a statement.

East Baton Rouge, the second largest district in Louisiana, improved for a second year in a row. It grew two percentage points overall in mastery in English, social studies and math. Weak areas were fifth-grade English, seventh-grade social studies, algebra 1 and U.S. History. Almost six out of 10 schools in the parish improved and four schools improved 10 percentage points or more.

State School Superintendent John White on Thursday singled out East Baton Rouge Parish's year-old Innovation Network, funded by a multimillion federal school turnaround grant. The network's schools have been among the most focused in training and evaluating teachers on the use of so-called Tier 1 curriculum. More than nine out of 10 the state’s low-performing schools have adopted the curricula, which has been rated high by the state for its close alignment with state tests.

“You’ve seen the most dramatic improvements in that parish and among the lowest-performing schools in the state,” White said.

“We are so proud of the strides we took last year and it’s exciting to see the marked improvement in the first year of the Tier 1 curriculum implementation,” Drake said. “We will continue to narrow the achievement gap and grow across the board.”

Of four new charter schools that opened in Baton Rouge last year, BASIS Baton Rouge, did the best by far, with 55 percent of its students showing mastery on state tests. The other two, IDEA Innovation and IDEA Bridge, saw 18 and 14 percent of their students reach mastery, well below the state and district averages.

St. Helena Parish remained last in the state, despite improving its overall mastery rate from 6 to 7 percent.

Of the 15 districts in the capital region, nine improved, four saw no change, and two — Pointe Coupee Parish and Baker schools — declined. Baker Heights Elementary in Baker saw the sharpest decline in the state, with its mastery rate dropping from 18 to 5 percent.

In 2015, Louisiana rolled out new educational standards. As part of that shift, the state began expecting schools to shoot not just for the basic achievement level, which used to be considered grade level, but to aim higher and achieve mastery or above in tested subjects. This year’s annual testing is the fifth in which schools have been tasked with meeting the higher standard.

PORT ALLEN — The group of teens stood off to the side of the room, quietly practicing the firm and confident handshake method councilman Carey…