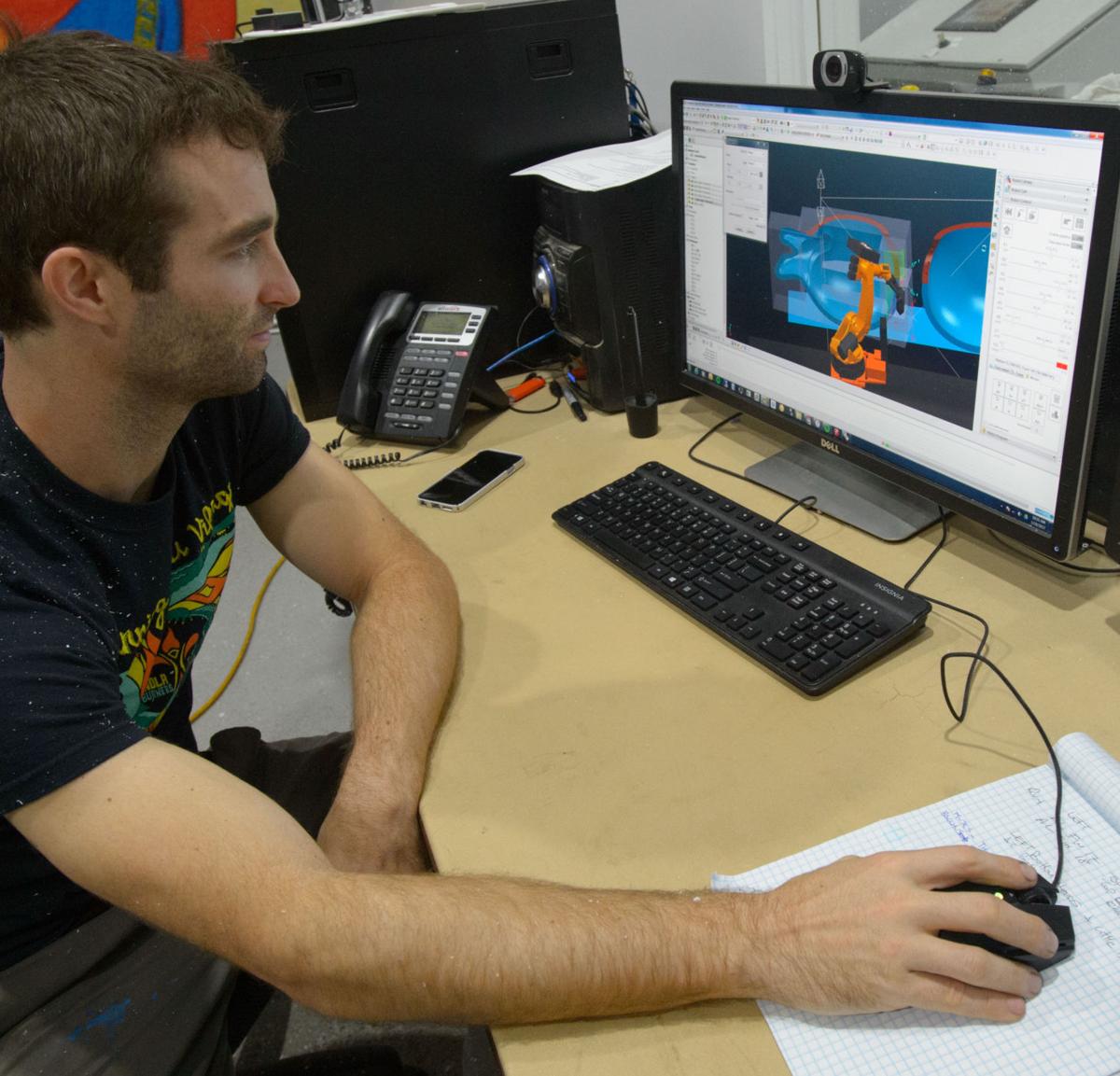 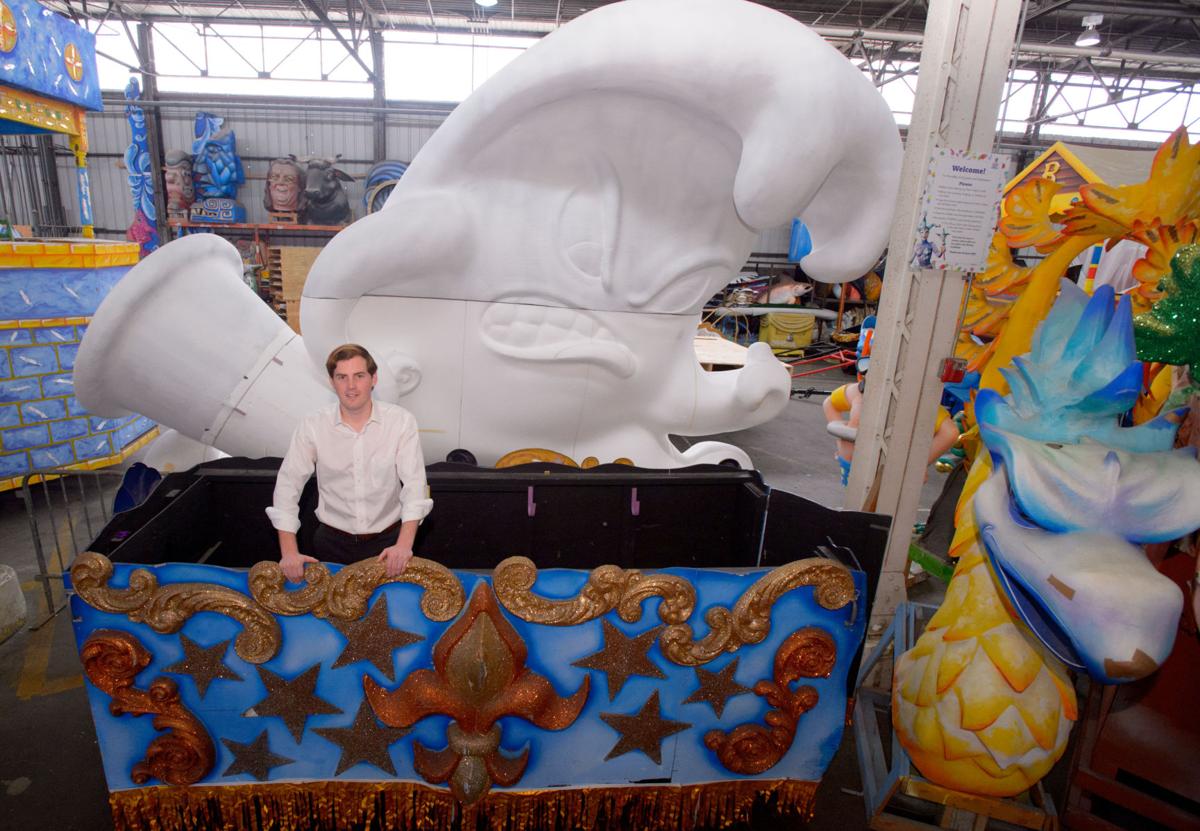 Fitz Kern stands next to a giant Green Wave sculpture made with a robotic arm at Kern Studios' Mardi Gras World in New Orleans. The sculpture will be coated and painted and later moved to Tulane University's Yulman Stadium. 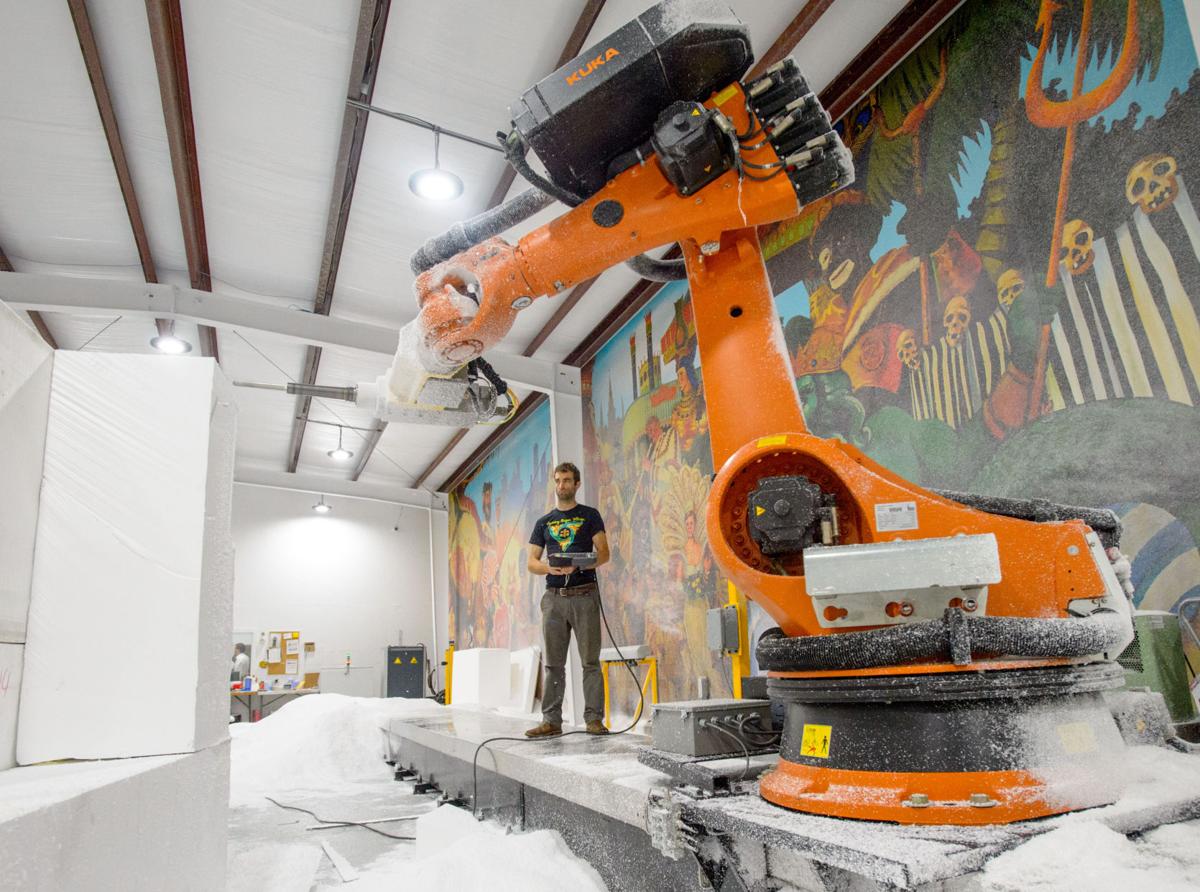 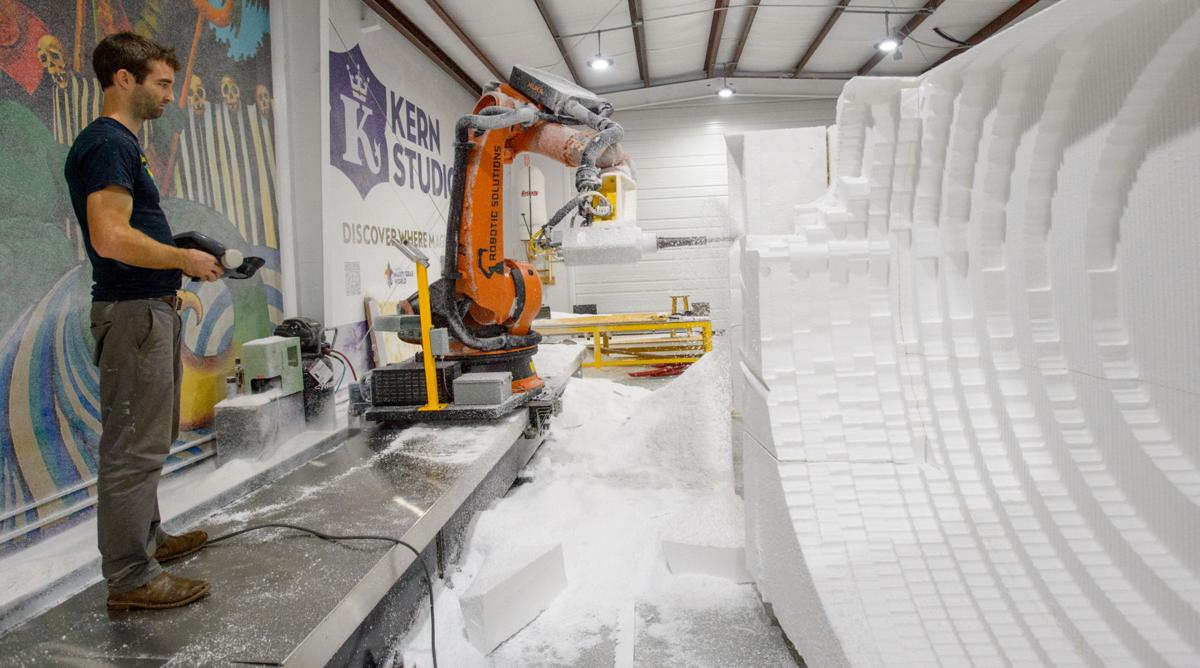 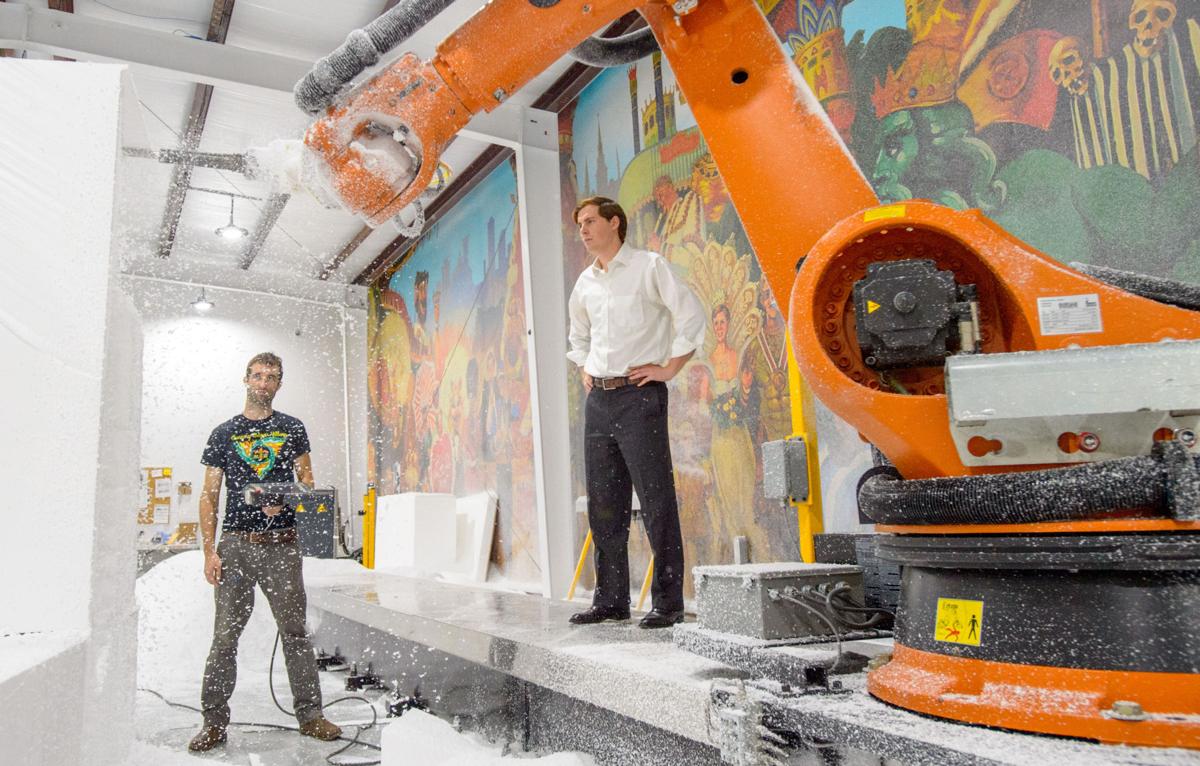 Brennan Steele, left, uses a robotic arm to cut foam for a float.

Fitz Kern stands next to a giant Green Wave sculpture made with a robotic arm at Kern Studios' Mardi Gras World in New Orleans. The sculpture will be coated and painted and later moved to Tulane University's Yulman Stadium.

Brennan Steele, left, uses a robotic arm to cut foam for a float.

On the banks of the Mississippi River, inside Mardi Gras World, an odd-looking worker toils through the night.

As employees clock out, they leave behind a hulking mass of Styrofoam, perhaps the size of a car. When they return in the morning, the foam has been carved perfectly into a cow. Or a bird. Or a Disney cartoon creature.

This Rumpelstiltskin of Carnival labors within a glass-walled, temperature-controlled showroom 100 by 30 feet wide — about the size of four bowling lanes. It's in a prominent location in Mardi Gras World, where visiting schoolchildren and tourists can watch it at work.

Guy Martin Wenzel, 46, who worked with similar robots in Silicon Valley, came back to his hometown as a consultant to help president and CEO Barry Kern utilize the robot in its more whimsical New Orleans vocation.

Styrofoam has long been a staple at Kern Studios, and it is Pixie’s primary medium. For most one-time Carnival floats, the Styrofoam is covered with painted papier-mâché. A plastic coating is used for signature floats, which return year after year, or commercial projects that need more durability.

On a recent day, Mardi Gras World was bustling with artists making props by hand. One team was stacking massive cardboard flowers that will adorn a series of floats. A sculptor was busy repurposing a bald-headed New Year’s baby by adding wild hair, a satirical reference to the nation’s new president.

It’s the type of creativity on which Kern has built its reputation. And while Pixie is an invaluable tool, a robot can’t compete with that, said Fitz Kern, 24, who grew up playing hide-and-seek with his friends in warehouses stuffed with figures from Greek mythology, fairy tales and political satire.

At Carnival time, when Kern artists are tasked with creating 400 to 500 different floats, Pixie acts as an artists’ assistant of sorts. While artists often build out a sculpture to the right size, taking thick sheets of Styrofoam and gluing them together to create the right shape, Pixie dives into a large, unformed lump of Styrofoam and starts to carve. Artist can then take that rough cut and carve it into final shape by hand.

For Kern’s commercial clients — now about 50 percent of the company’s workload — Pixie can be set to more exacting standards. The robot can exactly replicate a model approved by a client, or a copyrighted image, like a cow prop for Chick-fil-A, a big commercial client for Kern Studios, which has made hundreds of Chick-fil-A cows using the same specifications.

Pixie can be trusted to re-create classic characters that everyone knows. “When Disney hires us to make Donald Duck, they don’t want it to look kind of like Donald Duck. They want it to be exact,” Fitz Kern said.

Pixie also can chisel a sculpture in negative form, creating a mold.

Soon, Pixie’s work will be on public display Uptown. A massive version of The Wave, Tulane University’s mascot, is being created for the end zone of Yulman Stadium, where it will gush water onto the student section whenever Tulane’s players make a triumphant play.

Fitz’s father, Barry Kern, first saw a robot like Pixie in 2015 on a tour of Shanghai Disney, where the automaton was creating a replica of the Black Pearl ship made famous in the movie “Pirates of the Caribbean.”

During the day, computer artists work in a control room next to Pixie’s showroom, using three-dimensional plans to create “toolpaths” — routes for Pixie’s arm. Then they do a run-through of those paths, watching the laptop for red lights, which warn of incorrect “collision” paths that could cause Pixie to trip up and shut down before the work is finished.

During the day, the artists set the robot for projects lasting four to six hours. When they leave at night, they program it to begin longer jobs, up to 23 hours.

For more than a month, Brennan Steele, 33, has been programming Pixie to create four massive animals — a mother and her babies — that will be mounted onto floats in one of Kern’s biggest parades. Pixie is able to cut sections of each giant creature at one time, which then can be seamlessly fitted together, because Pixie cuts them to exact size, Steele said.

Steele is able to operate Pixie by laptop using computer-aided manufacturing software, which drives Pixie’s toolpaths, or by hand with a device that looks like a gamepad used for video games. “It has its days,” Steele said. “But it can be fun.”