Louisiana Attorney General Jeff Landry broke with the chief legal officers of 46 other states who condemned the storming of the U.S. Capitol last week in a letter, with Landry instead writing his own letter criticizing his Democratic colleagues for not adequately decrying looting during Black Lives Matter protests last summer and condemning "all political violence."

The National Attorneys General Association sent a letter Tuesday to acting U.S. Attorney General Jeffrey Rosen, in which the bipartisan group of 49 chief legal officers said they were “appalled” at the storming of the U.S. Capitol.

“We all just witnessed a very dark day in America,” the legal officers wrote. “The events of Jan. 6 represent a direct, physical challenge to the rule of law and our democratic republic itself. Together, we will continue to do our part to repair the damage done to institutions and build a more perfect union. As Americans, and those charged with enforcing the law, we must come together to condemn lawless violence, making clear that such actions will not be allowed to go unchecked.”

The attorneys general of 46 states, two territories and the District of Columbia signed onto the letter, including Republicans and Democrats. Landry, along with his Republican counterparts in Montana, Texas and Indiana, did not.

Instead of signing on, Landry told his colleagues in another letter that “we should all – collectively – decry political violence in whatever shape, form or fashion it arises.” But, he wrote, when “widespread looting” took place and buildings were set on fire last summer, “many of my colleagues, especially those from the other party, sat silent or tacitly approved of the burning.”

“Now when the same type of outrageous and misplaced violence has occurred, this time right within the heart of our nation’s government, suddenly some of those same attorneys general want to speak out ... seemingly because they view this violence can be tied to a political party other than their own,” Landry wrote. 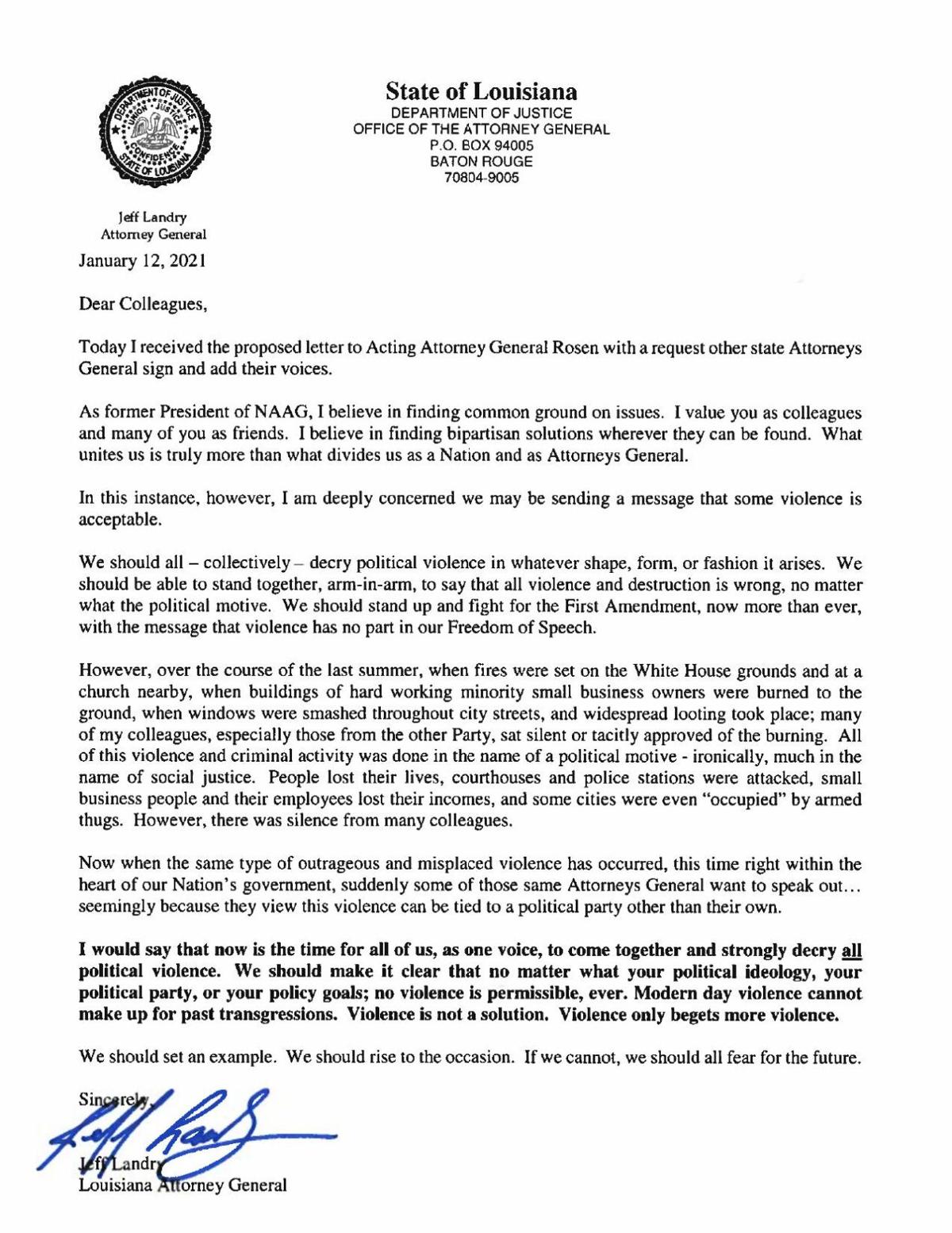 Landry was, until recently, chair of the Republican Attorneys General Association, whose fundraising arm sent robocalls encouraging people to attend the rally on Jan. 6 at the U.S. Capitol, several news outlets reported. Landry told WDSU in New Orleans he “was not aware of the call placed” by the Rule of Law Defense Fund, which is connected to the Republican Attorneys General Association. The executive director of the association resigned amid the backlash, NBC News reported.

In the wake of President-elect Joe Biden’s win, Landry joined Republican officials last month in backing a failed attempt to overturn the election results, expressing support for a lawsuit by Texas to have the U.S. Supreme Court toss out the results of four states that Biden won.

Trump supporters, who arrived at the U.S. Capitol to disrupt the certification of Biden’s election a week ago, stormed into the building, overwhelming police in a riot that led to five deaths.

On Wednesday, the U.S. House voted to impeach President Donald Trump for incitement of insurrection, with members voting on a largely party-line vote to send articles of impeachment to the U.S. Senate. Ten Republicans crossed party lines to vote to impeach Trump.

Landry and his Republican colleagues in Indiana and Montana wrote a separate letter to Rosen, saying they believe “the rule of law clearly leads to harmony.”

“But until we attorneys general stand together against all political violence, we amplify aimless partisan wandering instead of taking strides toward unity,” they wrote. “When antifa or like-minded rioters stoked violence on college campuses, we did not have the strength to unify. Now they stoke violence in our streets as we wonder where all this chaos started. And truly, regardless of where or when it started, it’s time for it to end.”

Gov. John Bel Edwards says he’s hopeful a surge of protesters expected at the state Capitol in the next week will stay peaceful, even as law e…