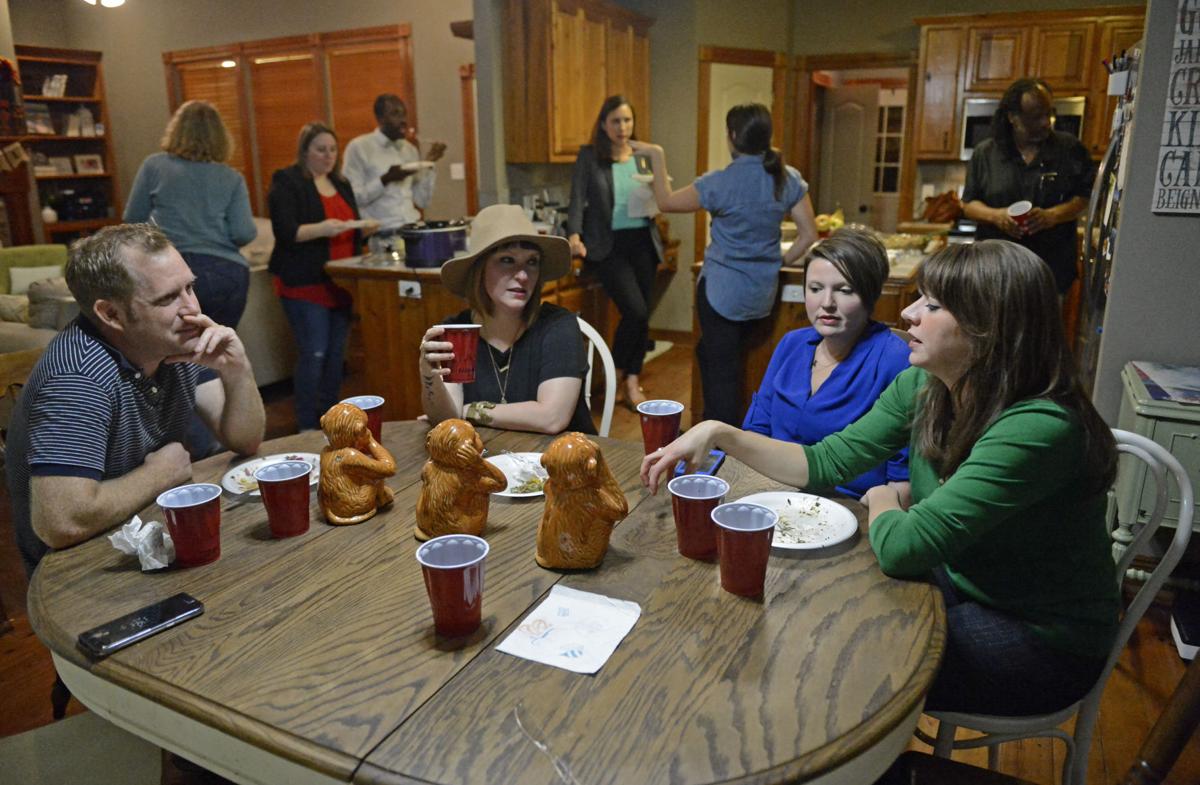 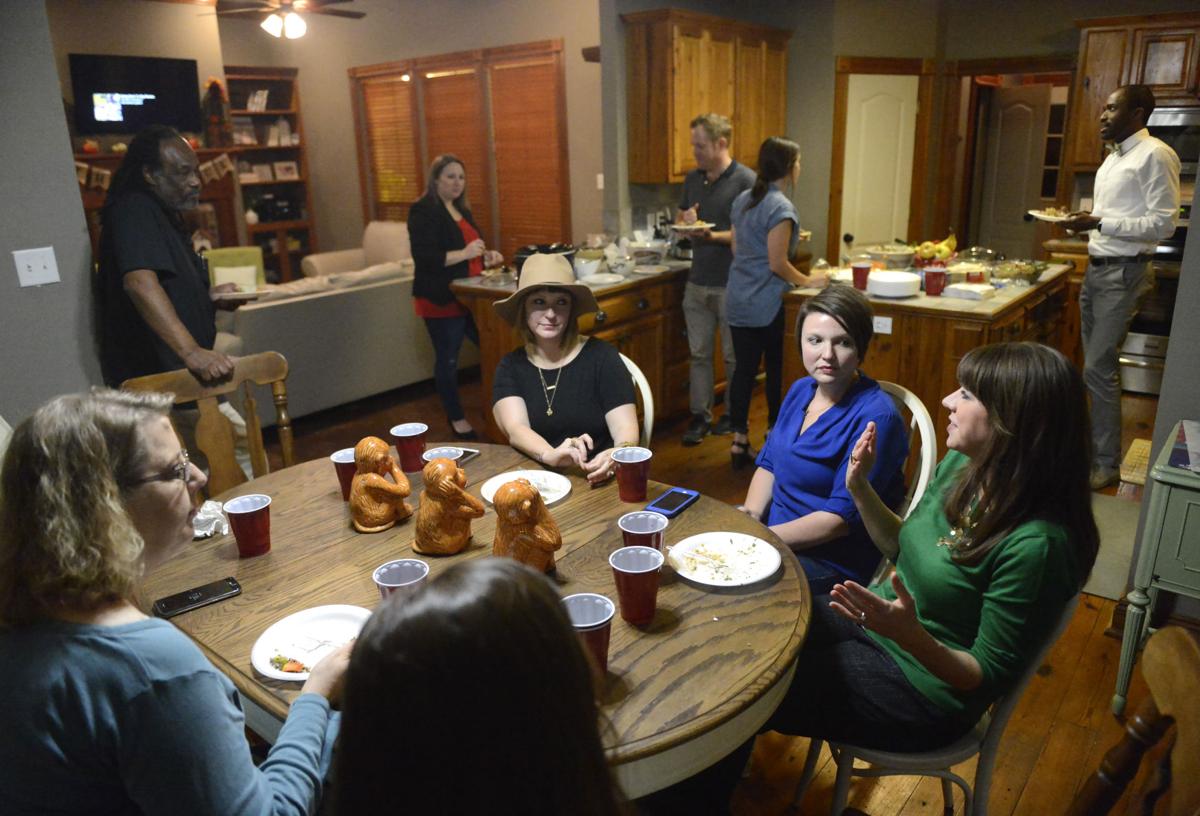 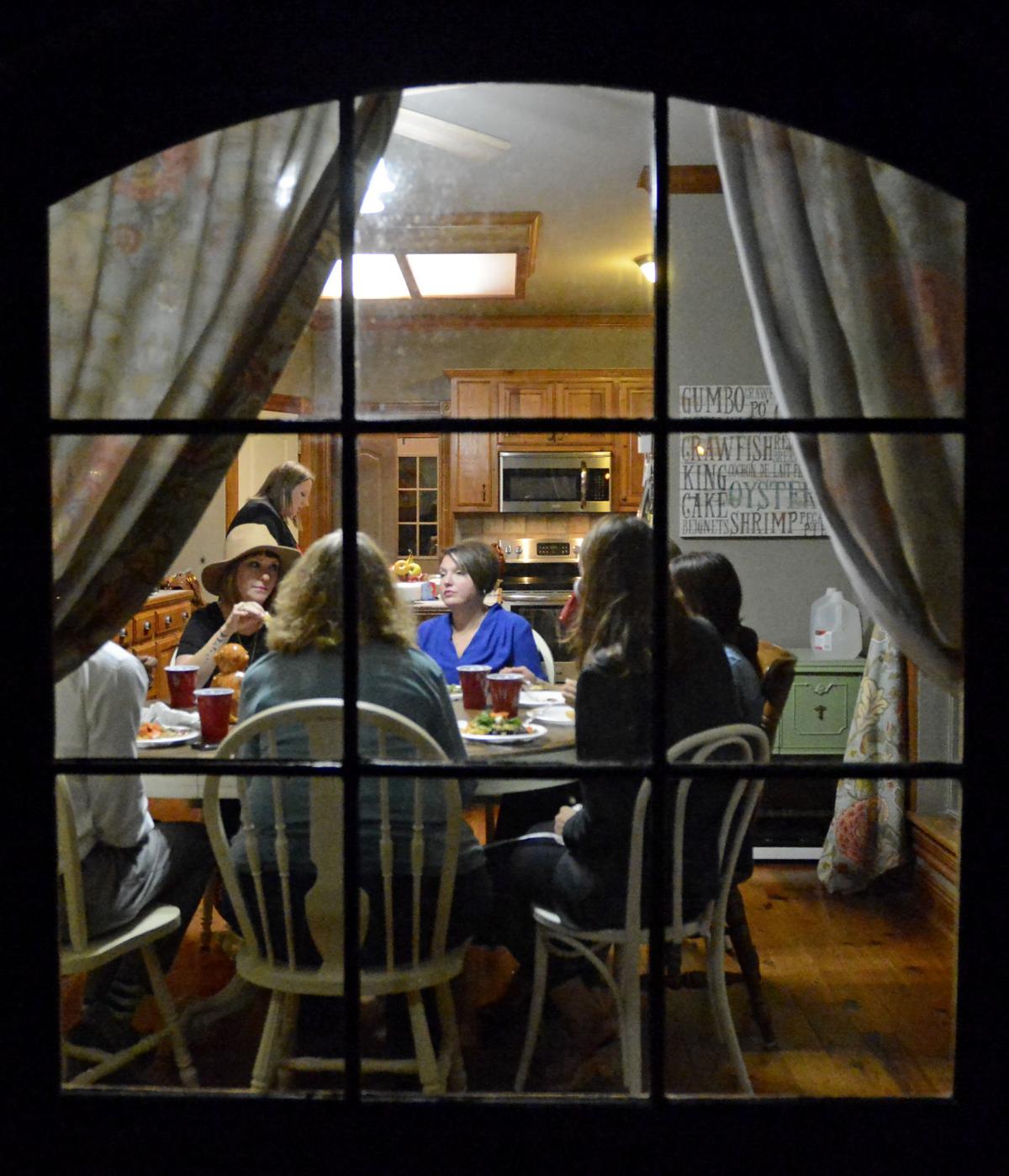 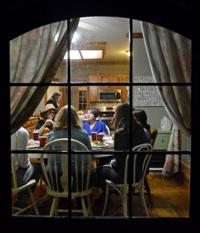 Attendees talk over a meal during a potluck "Dinner and Dialogue", Thursday, November 3, 2016, at the home of Ashley Suitt in Baton Rouge, La.

Attendees talk over a meal during a potluck "Dinner and Dialogue", Thursday, November 3, 2016, at the home of Ashley Suitt in Baton Rouge, La.

It may not be everyone's cup of tea to pay money to sit around a conference table of strangers and talk about racism for two hours every Thursday night for six weeks.

But after summer 2016 — marked by the shooting death of Alton Sterling by a Baton Rouge police officer, following by days of protests, arrests of demonstrators and the ambush killings of three law enforcement officers on Airline Highway — the topic of race seemed newly urgent in the capital city.

That's how several people described why they joined a recent installment of Dialogue on Race Louisiana, a six-week curriculum with readings and facilitated discussions on the roots of racism and how to work to end it. The program, which was created in Baton Rouge by former YWCA Board President and former journalist Maxine Crump and costs $25 to attend, has been holding the sessions for more than 20 years. One series, attended by two Advocate reporters, wrapped up on Oct. 20.

One woman in the class said the topic of race is touchy in her family, admitting: "My husband doesn't know I'm here."

The central theme of Dialogue on Race — which in its most recent course of about 12 people was made up of mostly white people, with two black participants — is that racism should not be thought of as a personal issue but an institutional one. Racism, the moderators emphasized, is often misunderstood as a matter of individual "racists" treating others with disrespect. Rather, they said, racism is powered by institutions, such as governments, school districts, transportation systems, PTA groups, police departments and media organizations. These groups, they argued, often are guided by policies that — sometimes unintentionally — end up marginalizing people of color.

Class participants shared their own observations of institutional racism in play. One woman, who works in transportation, relayed how certain plans related to interstates in Baton Rouge would cut off access to neighborhoods of color. Another woman cited how minority children in the capital city would bear the brunt of policy changes at her health care organization.

Understanding racism as institutional, not personal, might help people feel less afraid of being called "a racist" and can move the conversation to a more productive place, said Crump, Dialogue on Race's founder. Crump recently made national news when she was one of the first people to be identified as a descendant of slaves sold by Georgetown University in 1838 in order to pay off debts and save the institution.

"We have to get to the core of issue of race. That it was a social construct and informs the way all our institutions are set up. Since we never dismantled this structure," she said, "it continues to drive the way our society works."

For Nicole Colvin, a 33-year-old who works in health care philanthropy in Baton Rouge, Sterling's death on July 5 reverberated while she was the only white person on a trip in Hawaii with a group of friends.

"When the news hit with Alton Sterling, I saw how the news hit (my friends) and impacted them in a way. Even though we were on this beautiful island, they were so deeply rocked by this," Colvin said. She added that even though she'd had conversations about racism before, she realized she needed a deeper vocabulary for how to talk about it.

"You know, him and I, we're the same age, we're from the same city, and he died on my birthday," said Harper, who is white. "I felt kind of connected to that. And I knew I would never have the same fate as him."

Indeed, the topic of white privilege was the focus of one of the classes, paired with a reading from Peggy McIntosh's essay, "White Privilege: Unpacking the Invisible Knapsack."

The piece, written in 1990, includes a list of experiences that white people enjoy in everyday life that people of color typically do not, such as: "I can be pretty sure that if I ask to talk to the 'person in charge,' I will be facing a person of my race," and "I can choose blemish cover or bandages in 'flesh' color and have them more or less match my skin."

One discussion topic that surfaced was that people of color are forced to talk about and think about race and racism regularly, while white people are shielded from even thinking of themselves as having a race. The so-called myth of "racelessness," as was discussed in the series, can sometimes prompt the oft-heard phrase, "I don't see color."

Harper said growing up in the Sherwood Forest area, she knew as a child that the section north of Florida Boulevard, a predominantly black area, where Sterling was killed, was a "'bad' area of town."

But at the same time, she was taught little explicitly about race or racism as a kid, she said.

Some of the most impassioned debates on race in America occurred during the last two weeks of the series, when discussions focused on affirmative action and eliminating racism.

In week five, the group examined the pros and cons of affirmative action as presented by two authors and political activists with opposing views on the subject.

In his article, "Is Affirmative Action Still Necessary?," Jim Wallis argues the need for racial equality within institutions, using the U.S. Army as a model for society to follow.

In his piece Wallis, a white liberal, pointed out that although the Army sets the same bar for everyone to "jump over" when it comes to promotions, it also provides special training and instruction to minorities who need help meeting those standards.

Shelby Steele, a black conservative, in his piece "Affirmative Action: The Price of Preference" also stresses the need for professional development for minorities as a way to close the income gaps that exists between white and black families, but he asserts that affirmative action fosters feelings of inferiority in both whites and blacks.

Several group members felt racial preferences failed to abolish the prejudices driving hiring practices that keep minorities from achieving the same levels of success as whites. It instead gave birth to quotas that allowed companies to give off the appearance of inclusion without really creating environments where minorities can truly excel, many argued.

Christine Assaf, a white woman working in a human resources department, said companies often say they are trying to build a diverse workforce but will turn around and say no minorities are applying they could hire.

"I need to be at Southern University or I should be communicating with different colleges to get applicants in and visiting those classrooms to talk about opportunities that are available to them," Assaf said. "Beyond that, you have to have a grass-roots effort."

Bobby Thompson, who has been moderating "Dialogue on Race" panels for the past 17 years, said Steele and Wallis' conflicting views are always hot-button topics in week five's group discussion.

"I think we are probably seeing a period when affirmative action is the most watered down since its inception," said Thompson, a retired postal worker who is active in the community, volunteering his time with Together Baton Rouge. "If you look at the history of affirmative action, it's kind of like hitting a moving target; it's kind of hard to get a feel for where we are at."

The series concluded with strategies to dismantle racism through honest conversations among diverse groups and several calls to action that include tackling the issue within the systems that participants are already apart of.

"A public dialogue needs to begin with white people doing something for which they may have little practice: listening intently to people of color," authors Andrea Ayvazian and Beverly Daniel Tatum wrote in their article, "Can We Talk?"

Yvonne V. Delk, in her piece "A Time for Action," called for color-consciousness and not color-blindness to move the conversation forward.

Delk pointed out that black people don't want assimilation into white culture; they want to be able to live within it and retain their cultural identities and have that culture respected.

Those words resonated most with Ashley Suitt, a white, 32-year-old woman who works in recruiting in Baton Rouge. Suitt grew up in southwest Missouri and describes her majority-white hometown as a place with "plenty of racism but not a lot of people to be racist against."

Suitt expressed an interest in fostering relationships with minorities in hopes of gaining a better understanding of racism and make it a more personal issue for her family. But she's also afraid of doing or saying anything that might offend any new friend.

"The whole idea we just have to be uncomfortable sometimes and deal with it really hit me," she said. "I know I might say the wrong thing sometimes. But that doesn't mean I shouldn't at least try and foster those relationships."

As she was sworn into office Monday as East Baton Rouge Parish mayor-president, Sharon Weston Broome dove right into the the topic of race, ca…

A group of Baton Rouge citizens, community and criminal justice leaders met at the LSU Museum of Art on Friday for the first of a series calle…