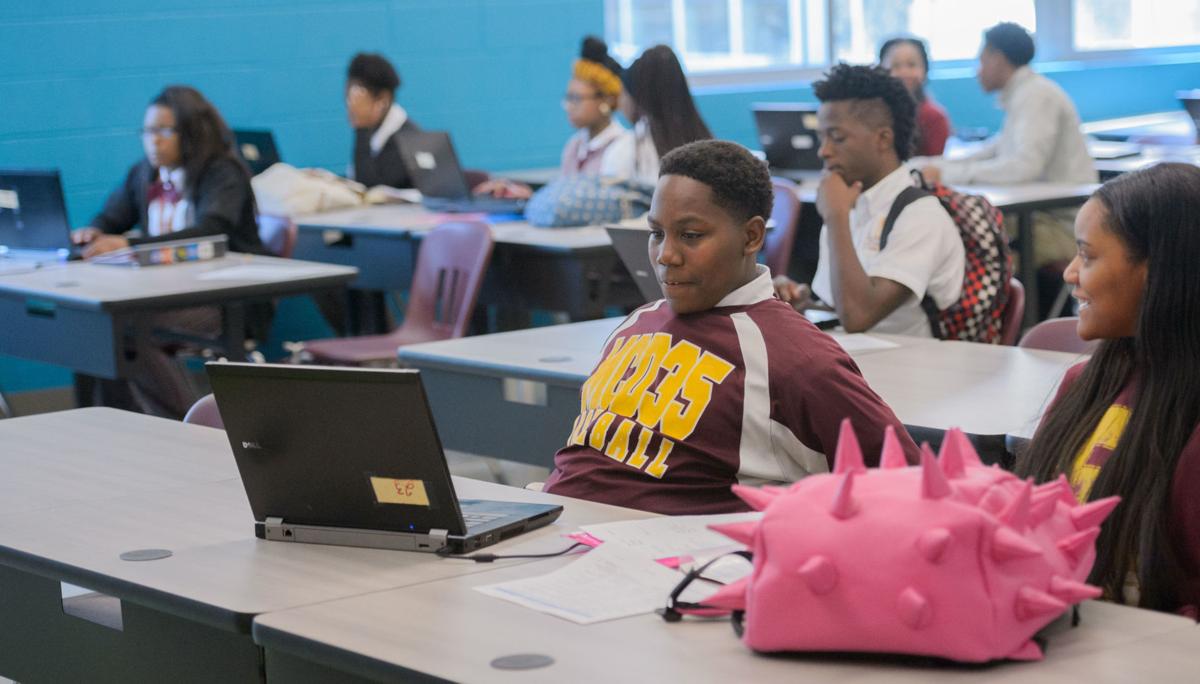 Advocate staff photo by MATTHEW HINTON--McDonogh 35 students are seen during in class at a dedication of the school's new 2015 campus on Cadillac Drive in New Orleans, La. Wednesday, Sept. 23, 2015. 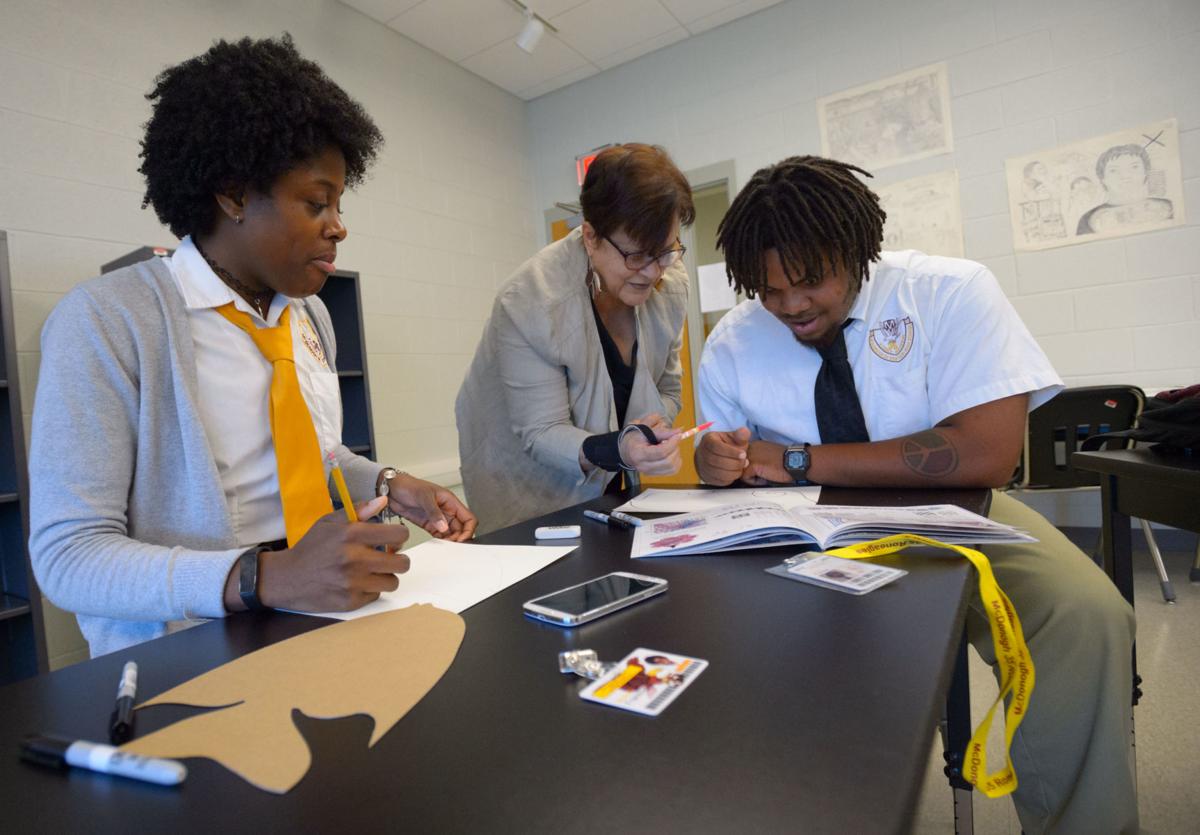 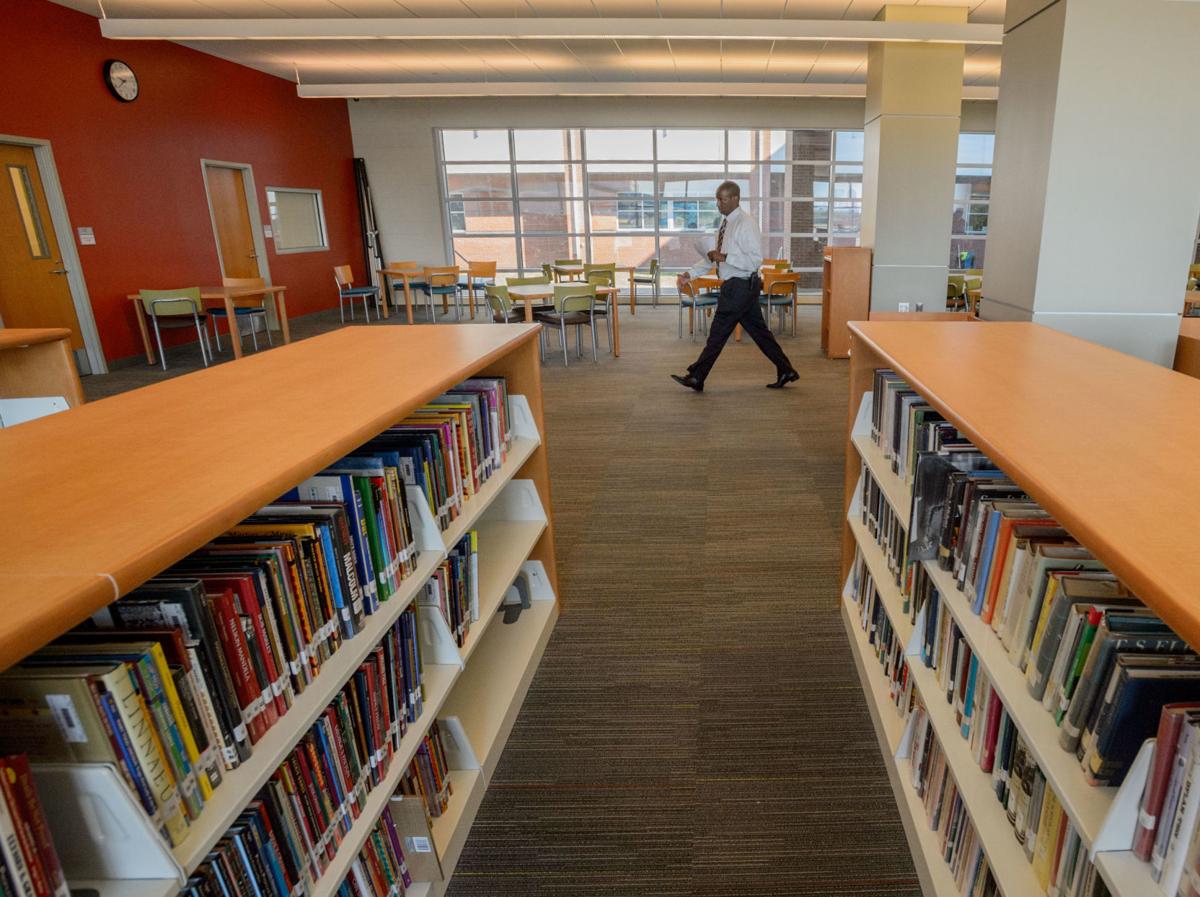 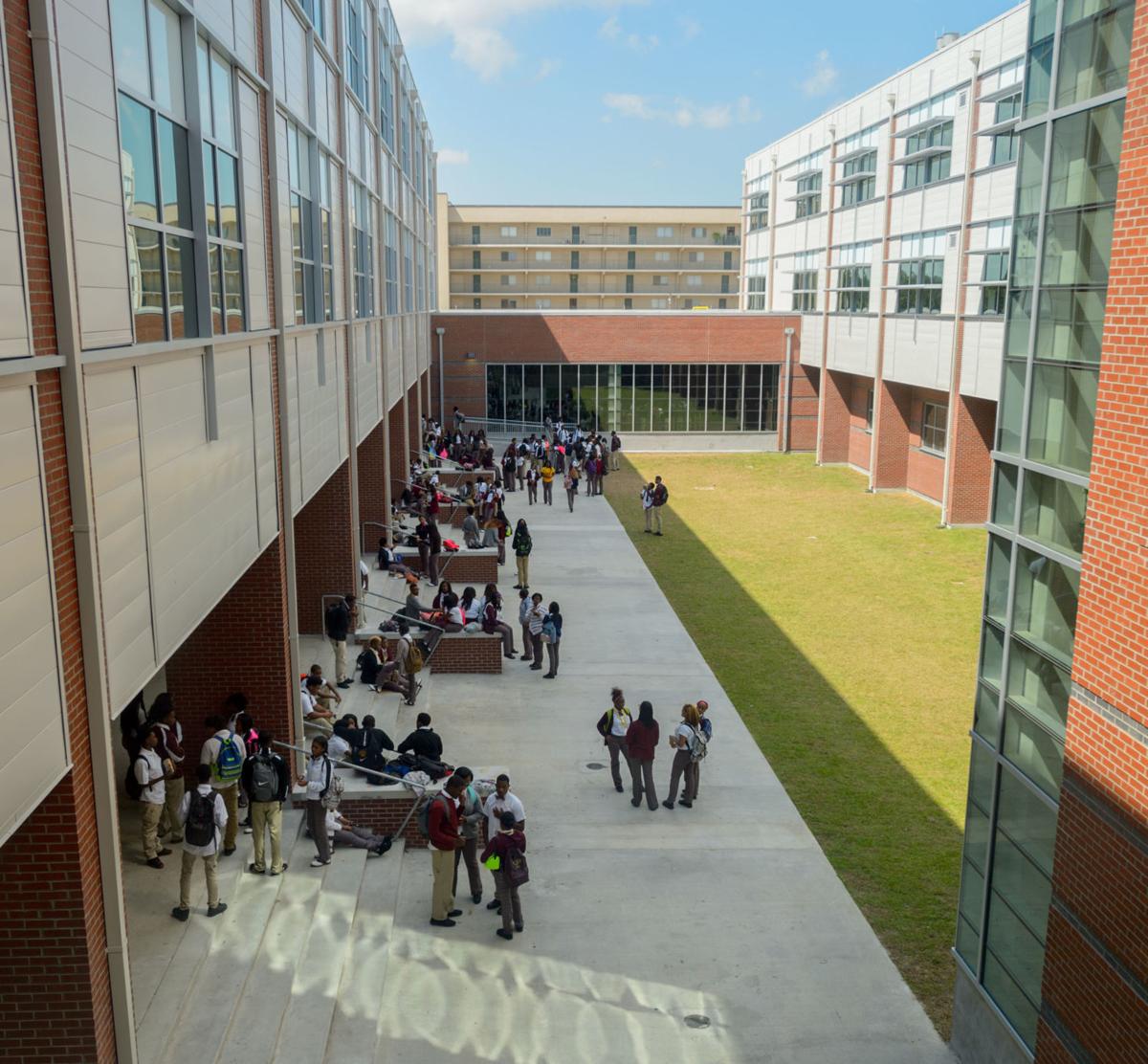 McDonogh 35 students are seen during break from class at a dedication of the school's new 2015 campus on Cadillac Drive in New Orleans, Sept. 23, 2015. 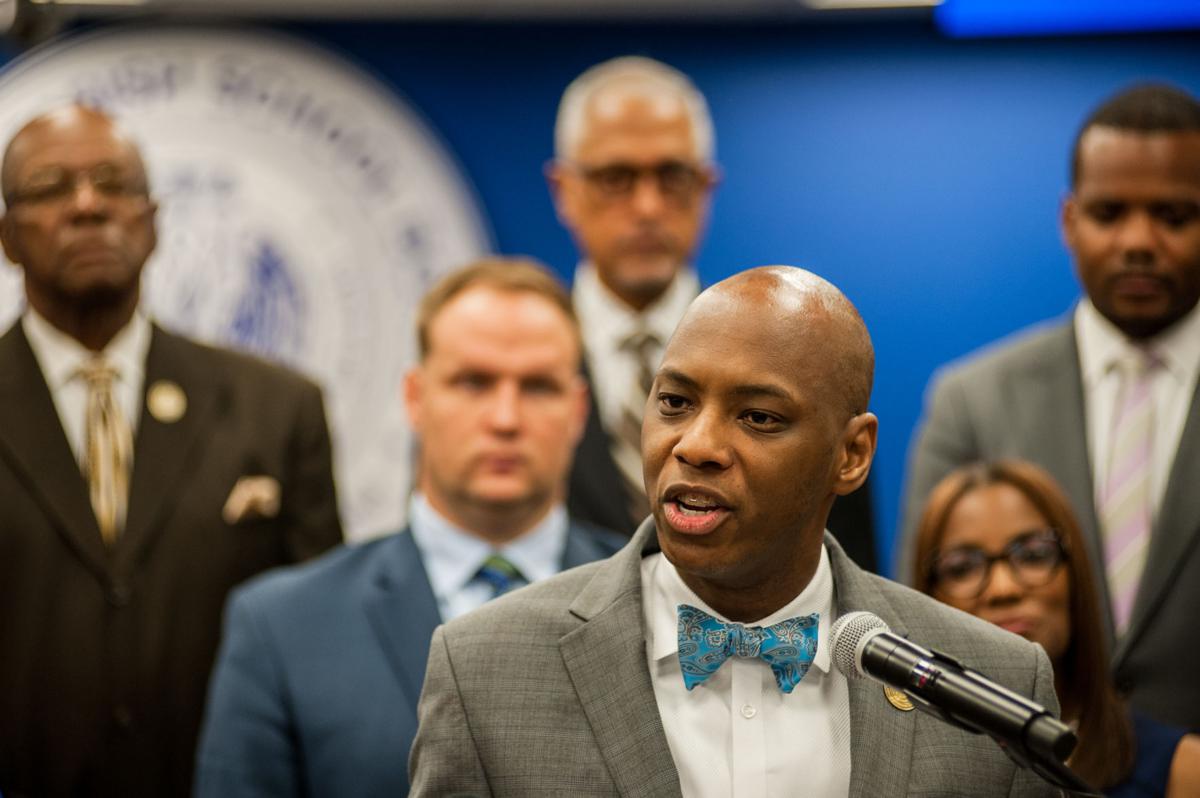 Advocate staff photo by MATTHEW HINTON--McDonogh 35 students are seen during in class at a dedication of the school's new 2015 campus on Cadillac Drive in New Orleans, La. Wednesday, Sept. 23, 2015.

McDonogh 35 students are seen during break from class at a dedication of the school's new 2015 campus on Cadillac Drive in New Orleans, Sept. 23, 2015.

Following a hotly contested 5-2 vote on one school's future by the Orleans Parish School Board on Thursday night, New Orleans is slated to become the first U.S. city with virtually all of its public schools run by charter organizations starting next school year.

As a packed room of community members chanted, shouted and waved signs in protest, the board gave a thumbs-up to a plan announced earlier in the day by Superintendent Henderson Lewis Jr. to have InspireNOLA, a high-performing charter operator, temporarily run McDonogh 35 Senior High School, which has been the city’s only non-charter public high school.

The charter group was awarded a two-year management contract to operate the existing school, which will have only 11th- and 12th-grade students. Once they graduate, that school will dissolve.

At the same time, InspireNOLA has gotten a new charter contract to create McDonogh 35 College Preparatory Charter on the same campus. That school will start with ninth grade and add a grade each year until it reaches 12th.

“This decision will restore and uplift the academic legacy of this much beloved school while maintaining its cultural importance,” board President John Brown Sr. said.

Parents shouted protests and some were escorted away from the podium, spewing scorn at school leaders. On the dais, members of the Orleans Pa…

The board also voted to create a $5 million, two-year transition fund for McDonogh 35.

With the school district’s two other direct-run schools set to close or transfer their management to charters in coming months, the decision on McDonogh 35 marks the completion of a movement begun in the aftermath of Hurricane Katrina to transform New Orleans' public schools into a system run by largely autonomous charter organizations.

The only remaining outlier to the charter structure is the Travis Hill School in the city's juvenile detention center; it is run by a nonprofit but not a charter operator.

“It’s definitely unique,” Caroline Roemer, director of the Louisiana Association of Public Charter Schools, said of the Orleans system. “It puts a lot of pressure on Orleans as a school district — and on the charters — on getting this right.”

McDonogh 35 opened in 1917 as Louisiana’s first public high school for black students. It currently enrolls 450 students on its campus in the former St. Bernard housing complex neighborhood, and is one of just three schools that the OPSB directly operates or will operate over the next few months.

After an "intensive year" of community meetings, including multiple discussions with students, families, and alumni, Lewis said his goal is “to bring McDonogh 35 back into its premier position as an academically successful, first-tier high school.”

For the first time, the Greater New Orleans Foundation is partnering with the Orleans Parish School Board to figure out how to increase equity…

The last part of the plan was made official on Thursday when the board voted to give InspireNOLA the short-term contract, as the organization had already been awarded a new charter and Lewis had authority to assign the McDonogh building to that new school.

The board heard about two hours’ worth of impassioned commentary before that vote at the evening meeting, mostly from parents and alumni who wanted the school to remain run directly by the OPSB, as nearly all public schools in the city once were.

As they spoke, protesters with the group Families and Friends of Louisiana’s Incarcerated Children cheered them on, sang chants with biblical references and shouted, “Erase the board!”

“These are the alumni of McDonogh 35, these are the parents, these are the children. This is the community,” resident Walter Goodwin told the board. “We did not elect you to be a rubber stamp. Do not rubber-stamp this. We elected you to represent us.”

Several audience members began crying and screaming after the vote.

“It saddens me, I have to say, in this point in time we have not done what we needed to do with McDonogh 35,” Marshall said.

Lewis had announced earlier that the district would close Cypress Academy and Edgar P. Harney Spirit of Excellence Academy, both directly run elementary schools, at the end of this school year. Things at Harney got so bad, however, that the district decided to step in and operate the school itself starting in January.

On Monday, Gertrude Ivory, president of the McDonogh 35 Alumni Association, released a statement asking the district to keep the 101-year-old institution under direct control, and to give “necessary supports and financial resources” for it to be successful.

Ivory argued that the OPSB would be the best partner to help restore the school to the national prominence she said it once enjoyed.

“The students, staff, parents and alumni will be best served as an Orleans Parish School Board direct-run school,” she said.

For decades before Hurricane Katrina, McDonogh 35 enjoyed a strong reputation and graduated numerous local notables, including former Mayor Ernest “Dutch” Morial and Judge Israel Augustine. However, its reputation dimmed as its academic achievement began to slip.

The school was last named a “School of Academic Achievement” by the Louisiana Department of Education in 2001, and it had dropped to a “D” letter grade by the time the state released 2016-17 school performance scores.

The OPSB solicited charter operators to take over the school during the last three application cycles, but no operator showed interest.

The school’s future has been uncertain since last year, when it started to phase out grades, and the district closed enrollment in an attempt to divert its remaining resources to improving academics.

On Thursday, district officials praised the charter organization, saying it has a “significant record of operating high-performing high schools,” pointing to Edna Karr High School in Algiers and Eleanor McMain Secondary in Uptown, two of the city’s most admired open-enrollment schools.

The organization also took over Andrew Wilson Charter in 2015, bringing the F-rated elementary school up to a C last year. Other InspireNOLA schools are Alice M. Harte Elementary and Dwight D. Eisenhower Elementary in Algiers and McDonogh No. 42 in the 7th Ward.

The transition to a school district run almost entirely by charter organizations has been years in the making.

The biggest shift happened in 2014, when the state’s Recovery School District still operated most of the city's public schools, many of which were faltering academically. That year, the RSD opted to close the last of its schools that hadn’t yet been taken over by charter organizations, making it the first official charter-only school district across the state.

The most stressful time of the year has arrived for many New Orleans parents, and it has nothing to do with holiday shopping.

At that point, only six remaining traditional public schools were being run by the OPSB.

Since the OPSB took over governance of all remaining RSD schools this summer, placing all public schools back under local supervision, Lewis has touted the benefits of a what he calls a "portfolio district."

The charter system, he said, is key to accountability, as it allows schools to expand or open new campuses if they are meeting state-enforced standards, and to be shut down if they are failing.

Members of New Schools for New Orleans, a pro-charter nonprofit organization, supported Thursday's decision, saying the charter movement helped usher in successes not seen in the city's schools for decades.

Last year, the nonprofit analyzed data from schools in New Orleans, 98 percent of which were charters, and found "numbers to celebrate."

When it’s a brisk winter day and you want to attract schoolchildren and their parents, it helps to bring warm buttermilk drops and hot coffee.

The organization found 11 percent of New Orleans students attended schools rated as lowest-performing in 2017. In 2005, 62 percent were in such schools.

“Charter schools are still very much an experiment, and in my opinion a very failed experiment,” Royal said. “It’s a failed model. We’ve gone down this path before … and it’s painful.”

Kindergarten classrooms are getting emptier in Orleans Parish.

Jay Altman, the man behind New Orleans' first charter school, to step down as CEO of FirstLine

The spark that started New Orleans’ charter school movement can be traced back to 1990, when an ambitious 26-year-old named Jay Altman founded…