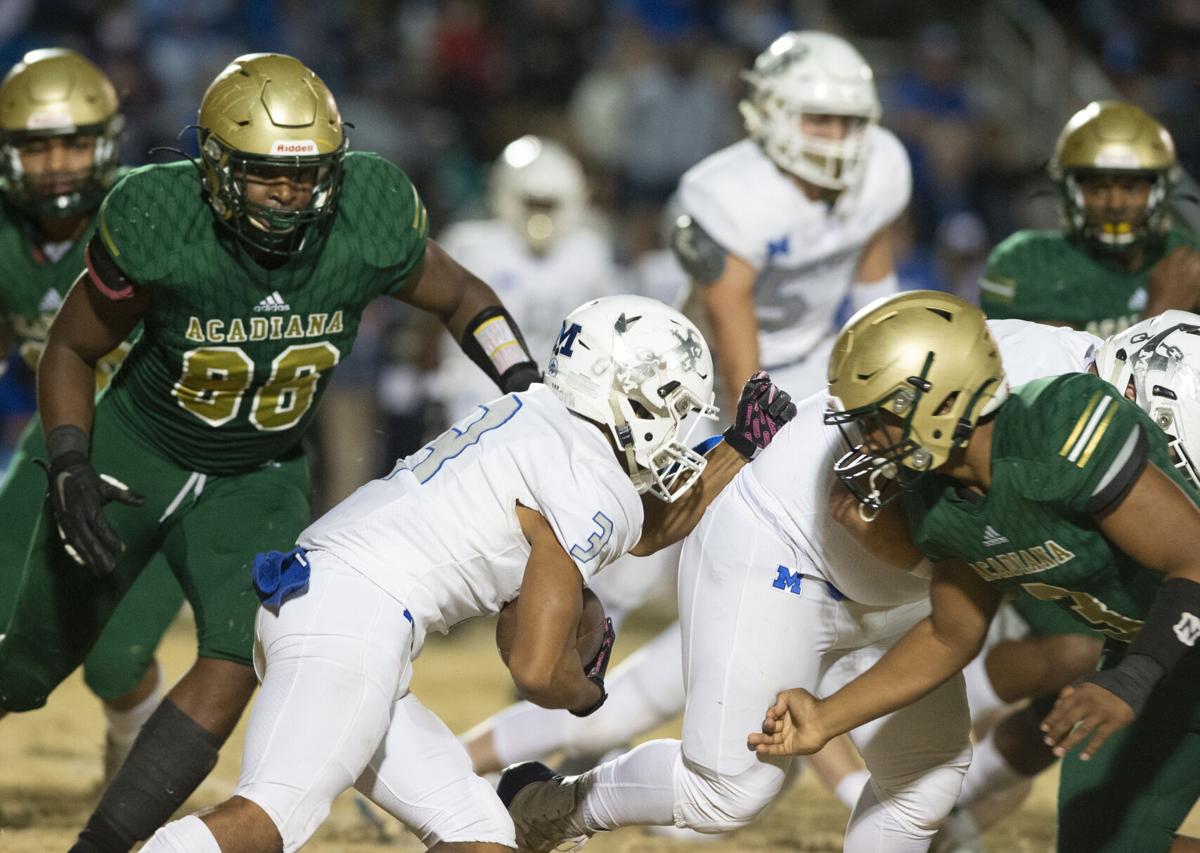 Acadiana's Walter Bob (88) and Derrick Bercier, Jr. (3) move in for the hit on Mandeville's Douglas McGowan (3) during the Rams' 21-0 win over Friday at Bill Dotson Stadium. 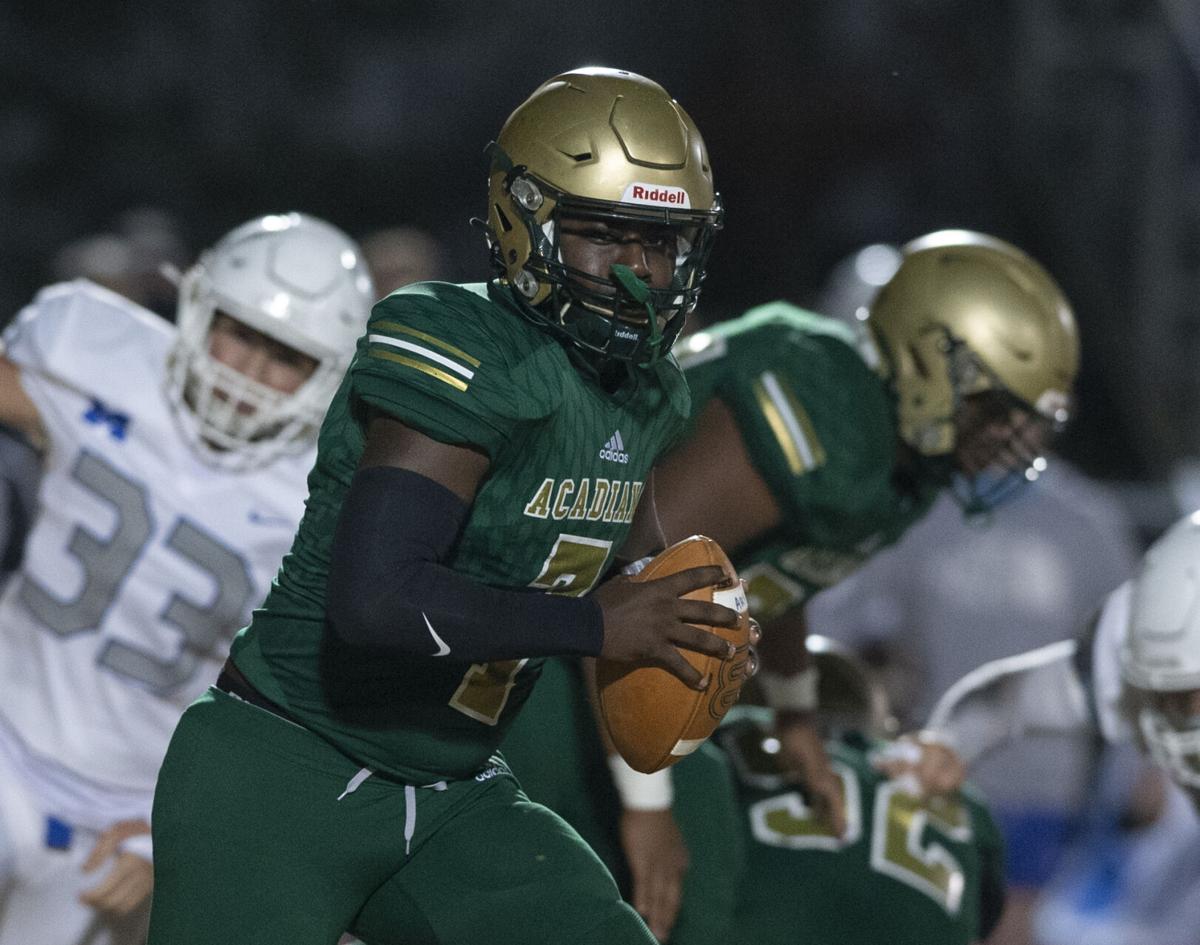 Acadiana's Jerimiah Brown (7) keeps the ball for a gainer during the Rams' 21-0 win over Mandeville on Friday at Bill Dotson Stadium.

Acadiana's Walter Bob (88) and Derrick Bercier, Jr. (3) move in for the hit on Mandeville's Douglas McGowan (3) during the Rams' 21-0 win over Friday at Bill Dotson Stadium.

Acadiana's Jerimiah Brown (7) keeps the ball for a gainer during the Rams' 21-0 win over Mandeville on Friday at Bill Dotson Stadium.

SCOTT — If several members of the Mandeville offensive line end up having nightmares of Acadiana High defensive tackle Walter Bob, it would be understandable.

The Wreckin’ Rams’ junior defensive lineman was virtually unblockable for most of the night, leading the way to a 21-0 shutout of No. 8 Mandeville in the Class 5A quarterfinals Friday at Bill Dotson Stadium.

“It feels amazing,” Bob said of the shutout. “We practice hard all week and on Friday nights, we just go hard at it.

“We watch film every day for hours. We just go out and fight hard on every play. That’s just what we do at Acadiana High. We just shut down people. That’s our mindset.”

That’s certainly been the case during the postseason. After limiting Covington to negative total yards in the first round, the Rams held Mandeville to just seven first downs and 102 total yards Friday.

“I told our guys at halftime that the game was on the secondary, because they couldn’t handle our guys upfront,” defensive coordinator Kyle Seibold said. “It wasn’t just Walter. There were physical mismatches with our defensive line and their offensive line.”

Out of 39 offensive plays, Mandeville’s offense only gained more than 2 yards 10 times. On 25 of the plays, the Skippers got zero or minus yardage.

The only Skippers drive not ending with a punt or the end of a half was a Draulin Anthony interception at the Rams' 1.

And Bob was leading the charge with sacks to force punts on Mandeville’s first and third drives.

“First of all, he’s a physical freak,” Seibold said of Bob. “He plays with an extremely high motor. He plays with great intensity and great passion. The crazy thing is he does it at practice too. It doesn’t just happen on the field on Friday nights. He’s that way in practice.”

Bob is part of a defensive line that also includes such standouts as Cam George and Trey Bossier.

“It’s great,” Bob said of the defensive line. “It’s competition. It’s all love and all fight.”

Mandeville’s defense went toe-to-toe with the Terrible Turks for a while, but Acadiana’s offense put together an eight-play, 80-yard drive in 4:15 to break the ice.

A 47-yard pass play to Samuel Kee ignited the drive and quarterback Jerimiah Brown finished it off with a 5-yard touchdown run. Brown later scored on a 13-yard touchdown run to the same left corner to finish the night with 90 yards on 13 carries.

“We knew he could do that,” Acadiana coach Matt McCullough said. “We kind of protect him early, but he can run. He’s done that the last few games. He’s done that for us toward the end of the year. He can run, he can pitch. He does a good job. He runs the offense well.”

Sandwiched in between those two runs was a 66-yard touchdown run by Omiri Wiggins, who finished with 129 yards and a score on 15 carries.

“I thought they played extremely hard on defense,” McCullough said. “We knew they were pretty good on defense. They had nine or 10 guys back from last year’s team that made it to the quarterfinals and played good D.”

After the slow start, the Rams finished with 299 yards rushing and 47 passing in collecting 16 first downs.

“I think we’re getting better,” McCullough said of the offensive line. “I’ll have to look at it (film), but we’ve been playing better the last few weeks.

“We just have to try to continue this week. We’ve got a big one — a rematch with Destrehan in the semis.”

Bob has an early warning for the Wildcats, however.

In a continuation of what’s become a good playoff rivalry, No. 1-seeded Acadiana hopes to extend its winning streak to four over No. 5 Destreh…