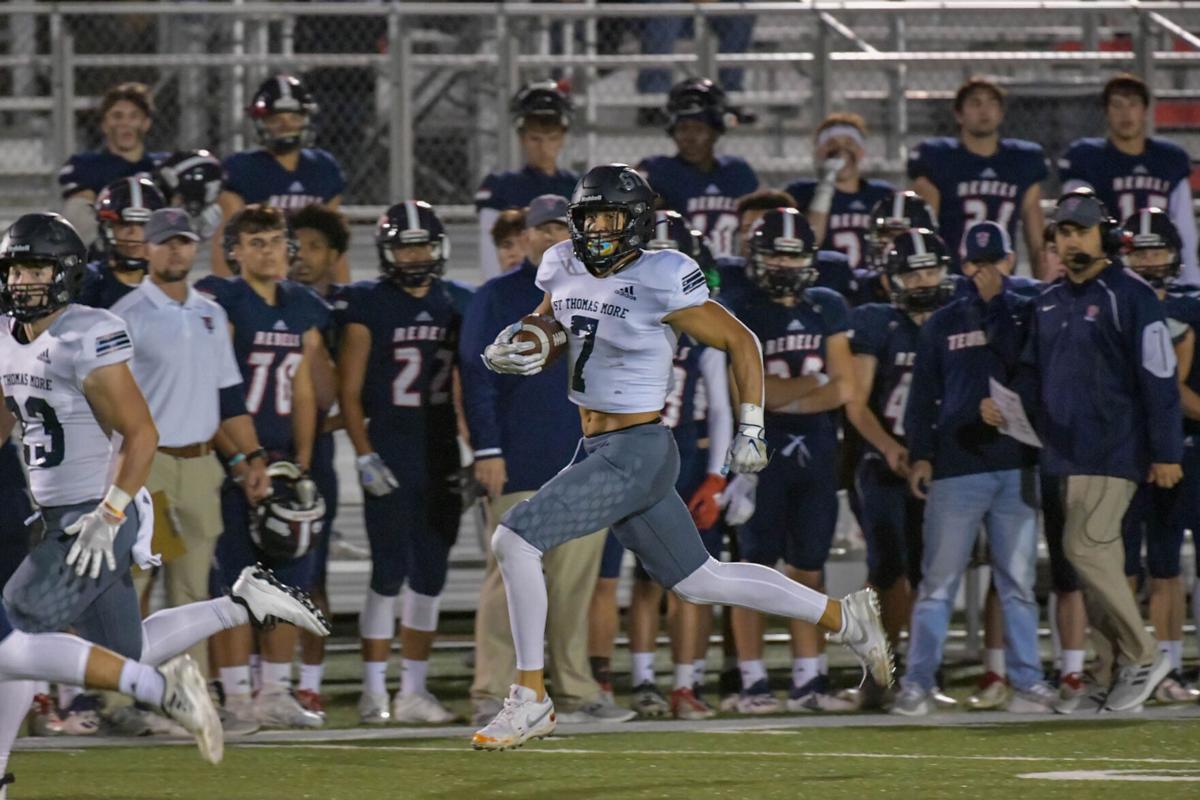 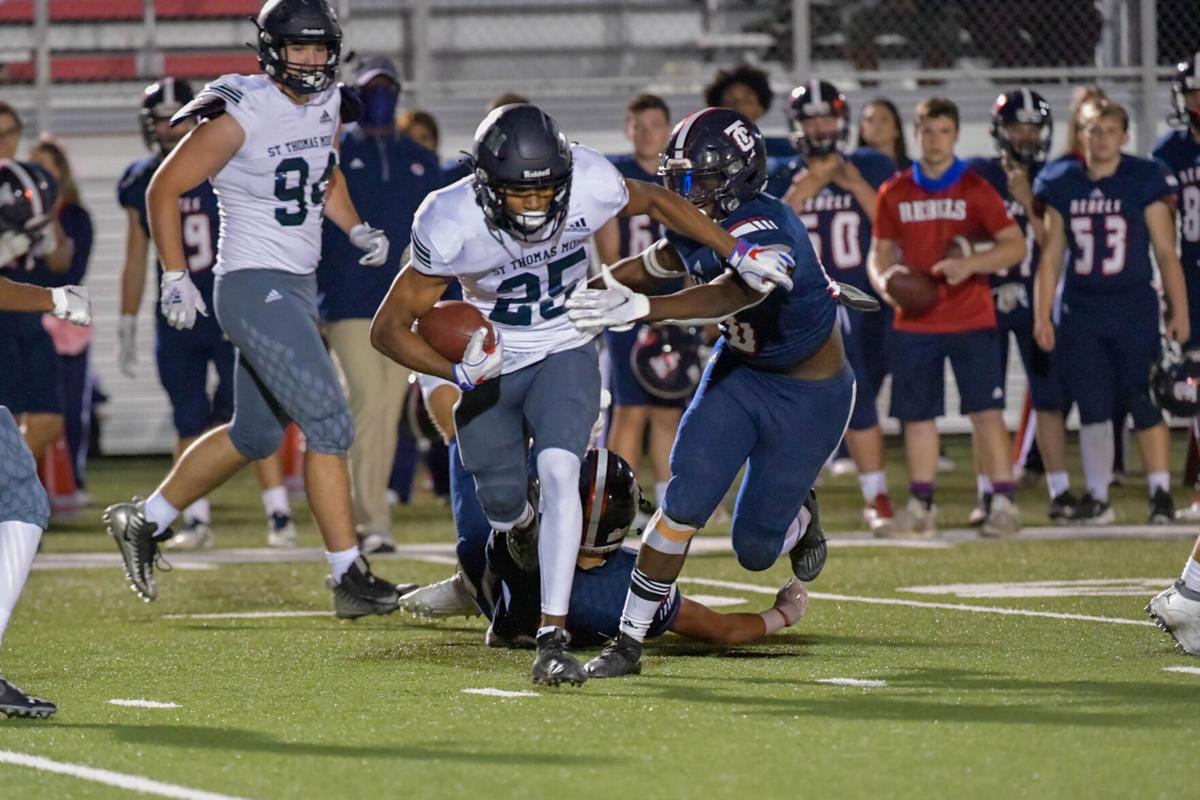 St. Thomas More cornerback Dominic Zepherin tries to break a tackle after an interception during the Cougars' 42-19 road win over Teurlings Catholic on Friday.

St. Thomas More cornerback Dominic Zepherin tries to break a tackle after an interception during the Cougars' 42-19 road win over Teurlings Catholic on Friday.

So when he was told that teammate Jack Bech would be wide open over the middle, he believed them.

The St. Thomas More High starting quarterback then proceeded to toss a 26-yard touchdown to his star wideout who, as expected, was wide open.

"(Offensive coordinator) Shane Savoie does a great job — he's the best around — and he told me, 'Look, Jack's going to be wide open right up the middle," Howard said. "I said all right, and I threw it right up the middle and there he was, touchdown."

The third quarter score, from 26 yards out, was one of Howard's five total touchdowns on the night as his Cougars cruised to a 42-19 road win over Teurlings Catholic High at Rebel Stadium on Friday night.

The Cougars' fifth straight win over their district rival improves their overall record to 5-0 heading into next week's home district match up against Northside High.

"We know they're always going to be well-prepared, they're always going to play well," STM coach Jim Hightower said of Teurlings. "It's just a scrappy game, you have to go out and just keep playing, keep playing, and make plays when you have the opportunity. That's pretty much what happened tonight, I was proud of our kids. We made some big plays."

Howard, the junior QB who has committed to LSU, tossed for 425 yards, four touchdowns and one interception — his first of the season — on 29-of-35 passing, adding a one-yard rushing score in the second half.

Bech finished with five catches for 119 yards and two touchdowns, including a 62-yard score on just the third play from scrimmage. Carter Arceneaux added 98 yards and a touchdown on eight catches, while Carter Domingue reeled in a 13-yard touchdown in the fourth quarter.

Tobin Thevenot led the rushing for the Cougars, tallying 55 yards and a TD on 12 carries.

"I couldn't do it without these studs on the outside," Howard said of his offensive weapons. "It's crazy the catches these kids make — all of them, they're all studs."

The Cougars wasted little time jumping ahead, scoring a pair of touchdowns to take a quick 14-0 lead less than three minutes into the game.

Howard hit Bech for the 62-yard touchdown at the 10:59 mark before turning right around and hurling a 38-yard score to Arceneaux, who made a leaping grab in the end zone for the double-digit lead, on the first play of their second possession.

After forcing a turnover on downs on the Cougars' third drive of the game, the Rebels (2-3) took advantage by orchestrating a 74-yard scoring drive capped by a 4-yard touchdown run by senior Larkin Spring to put Teurlings on the board at the 2:23 mark of the quarter.

The offensive surge slowed down over St. Thomas More's next few possessions, riddled with penalties and a rare Howard interception on the first play of the second quarter.

"We have to keep making progress, that's all you can do," Hightower said. "We did have several holding calls, I guess we'll have to clean it up. That slowed us down some early tonight."

The second quarter interception didn't keep the junior signal caller down for long.

"That was my first interception," Howard said. "You learn from your mistakes and you get better. You watch film, you get better out there every play ... it's fine, it was on to the next play."

Leading 21-6 at the halftime break thanks to Thevenot's 7-yard TD run with 1:05 to spare in the second quarter, the Cougars broke the game open with three second half scores to seal the team's fourth 40-point performance of the season.

Quarterback Kaden Boulet threw a pair of second half touchdown passes, from six yards out to the running back Spring and from 12 yards out to receiver Julien Guy, for the Rebels. Spring also added a first-half rushing score in the loss.