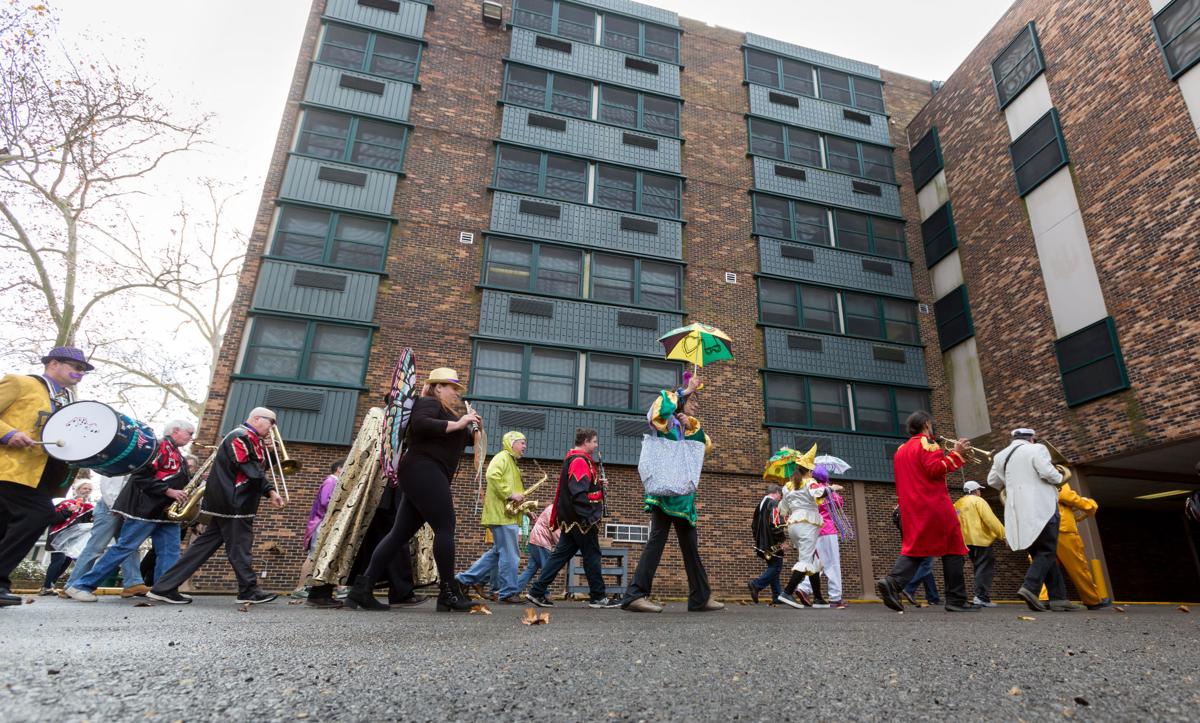 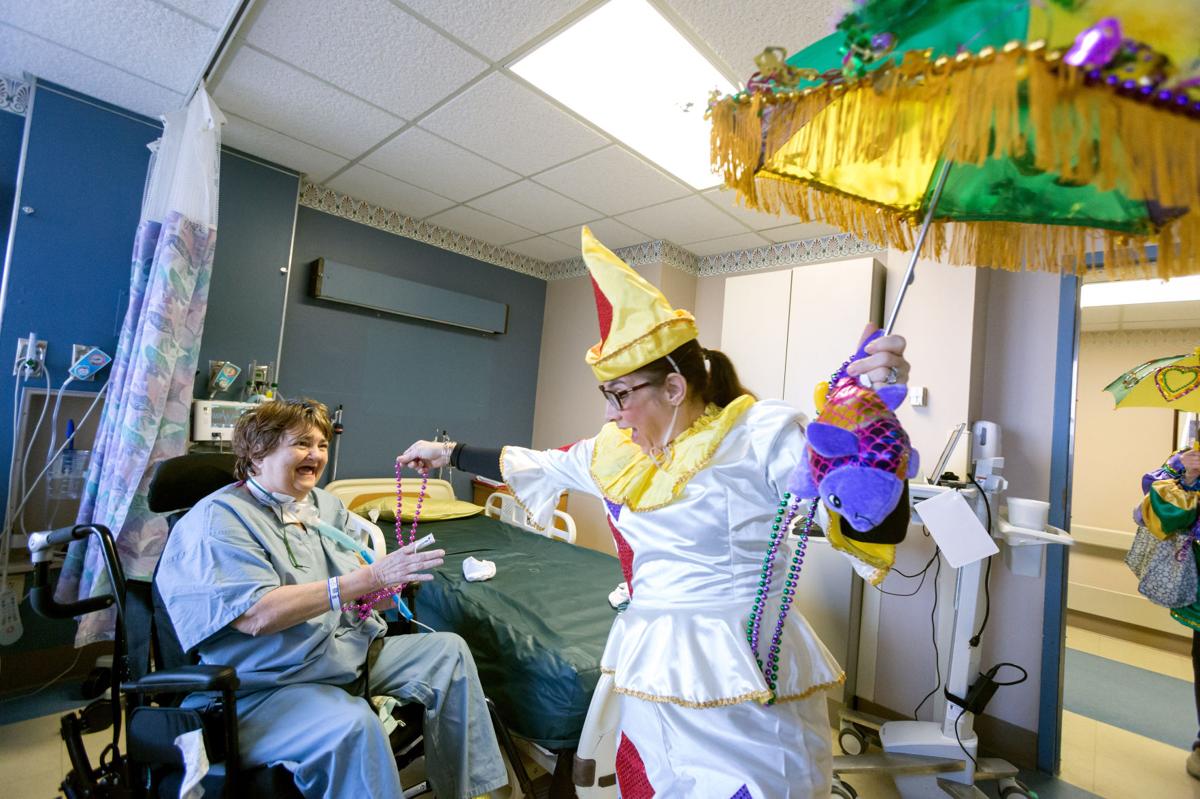 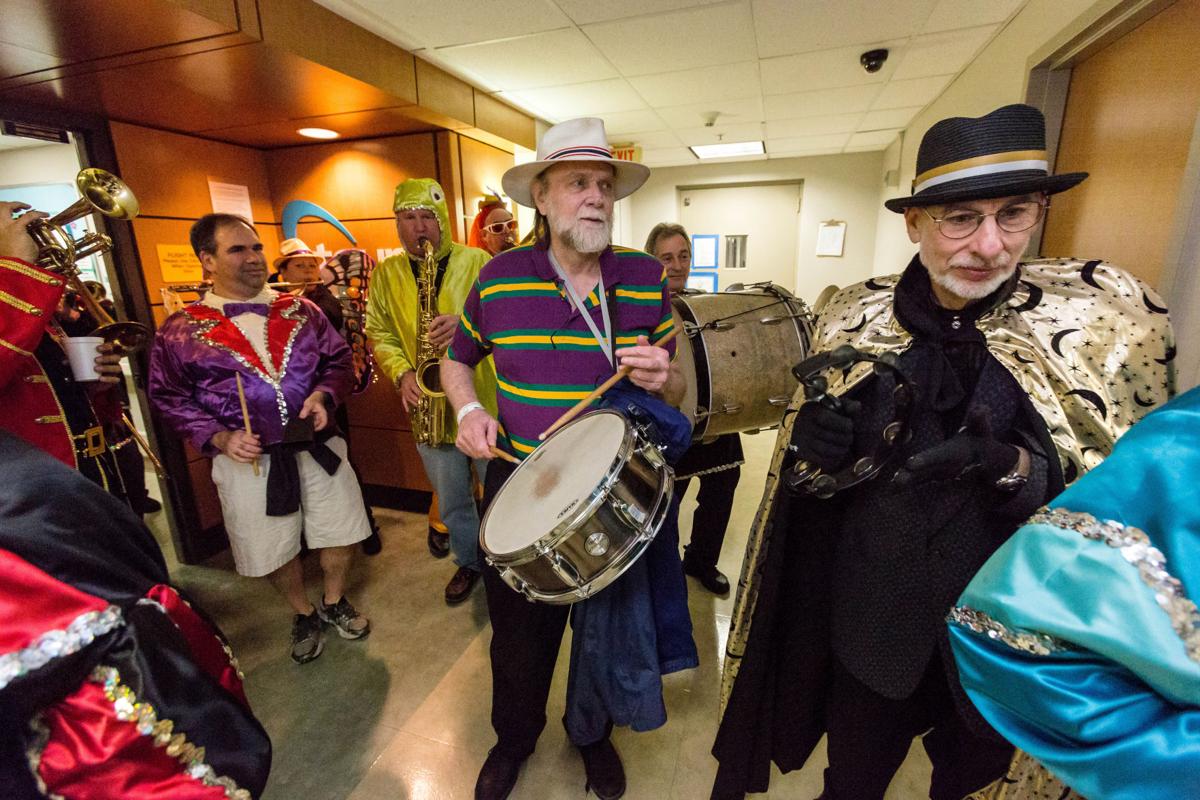 Members of the Mardi Gras Mitzvah Makers second-line through a rehabilitation wing at Touro Infirmary in 2018, with live music, beads and doubloons and king cake.

Members of the Mardi Gras Mitzvah Makers second-line through a rehabilitation wing at Touro Infirmary in 2018, with live music, beads and doubloons and king cake.

The Touro Medical Plaza is a labyrinth of office doors, painted in soothing shades of blue and gray. But Suite 48, the office of Dr. Hilton Marx Title, stands out. It’s festooned with shimmery purple, green and gold garland and two tiny Mardi Gras flags. A narrow, vertical window offers a glimpse of the Carnival decor inside.

Title, a family dentist, is the chairman of the B'nai B'rith Mardi Gras Mitzvah Makers — a group of costumed revelers and musicians who parade through medical centers every year and hand out Carnival throws and king cakes to the patients, their families and the staff.

“We bring Mardi Gras to people that can't make it to Mardi Gras,” said Title, a trumpeter in the troop’s brass band.

The Mardi Gras Mitzvah Makers will celebrate the 40th anniversary of their hospital parade when they meet Sunday morning in the lobby of Touro Infirmary on Foucher Street, off Prytania. From there, they’ll follow a parade route that winds through the hospital’s rehabilitation floors, the nearby Curahealth Hospital on Coliseum Street, and HomeLife in the Gardens on Aline Street.

“The event is not just for the children and the patients, although they're the primary mover, but the staff at the hospitals. They truly appreciate us,” said Andrew Polmer, who co-chairs the group with Avrom Denn.

“Some of the patients we see don’t seem responsive; they can't communicate,” he said. “But their families are there, and they appreciate the break in the solitude of sitting by a loved one who's in a vegetative state, or recovering.”

The Mardi Gras Mitzvah Makers were formerly known as B'nai B'rith, Unit No. 182. B’nai B’rith is an international Jewish service organization based in Washington, D.C. The organization helped operate an Uptown home for orphans from the mid-1870s through the 1940s and continues to sponsor local volunteer projects.

The parades were initially held on the pediatric floors of Charity Hospital and later University Hospital, which flooded after Hurricane Katrina. The krewe briefly paraded through Children’s Hospital before moving to their present Uptown route in and around Touro Infirmary.

Producing the jamboree is a team effort, Title and Polmer agreed.

The members gather on parade day with a collection of Mardi Gras beads, plush toys and other trinkets.

“It's a nice way to reconnect with friends that we've known over the years,” Title said.

His favorite part of the event, however, is witnessing the joyful reactions coming from people within the crowd, and sharing their excitement. One interaction in particular stands out, Title said.

“There was an amputee patient in a wheelchair,” he recalled. “All he had was a stub, and that stub was beating to the music, as if that person was just dancing away. And to me, that just made everything so worthwhile.”

Polmer said part of the fun is surprising the health centers’ staff.

“All of a sudden, there's music, and there’s people dressed up in these Mardi Gras costumes," he said. "And there's king cake.”

Within minutes, employees from different parts of the hospital show up and join in, clapping and dancing to the live music. Doctors, nurses, administrators and janitors become part of the party, Polmer said.

“It’s really about bringing the spirit of Mardi Gras to everybody,” he added.