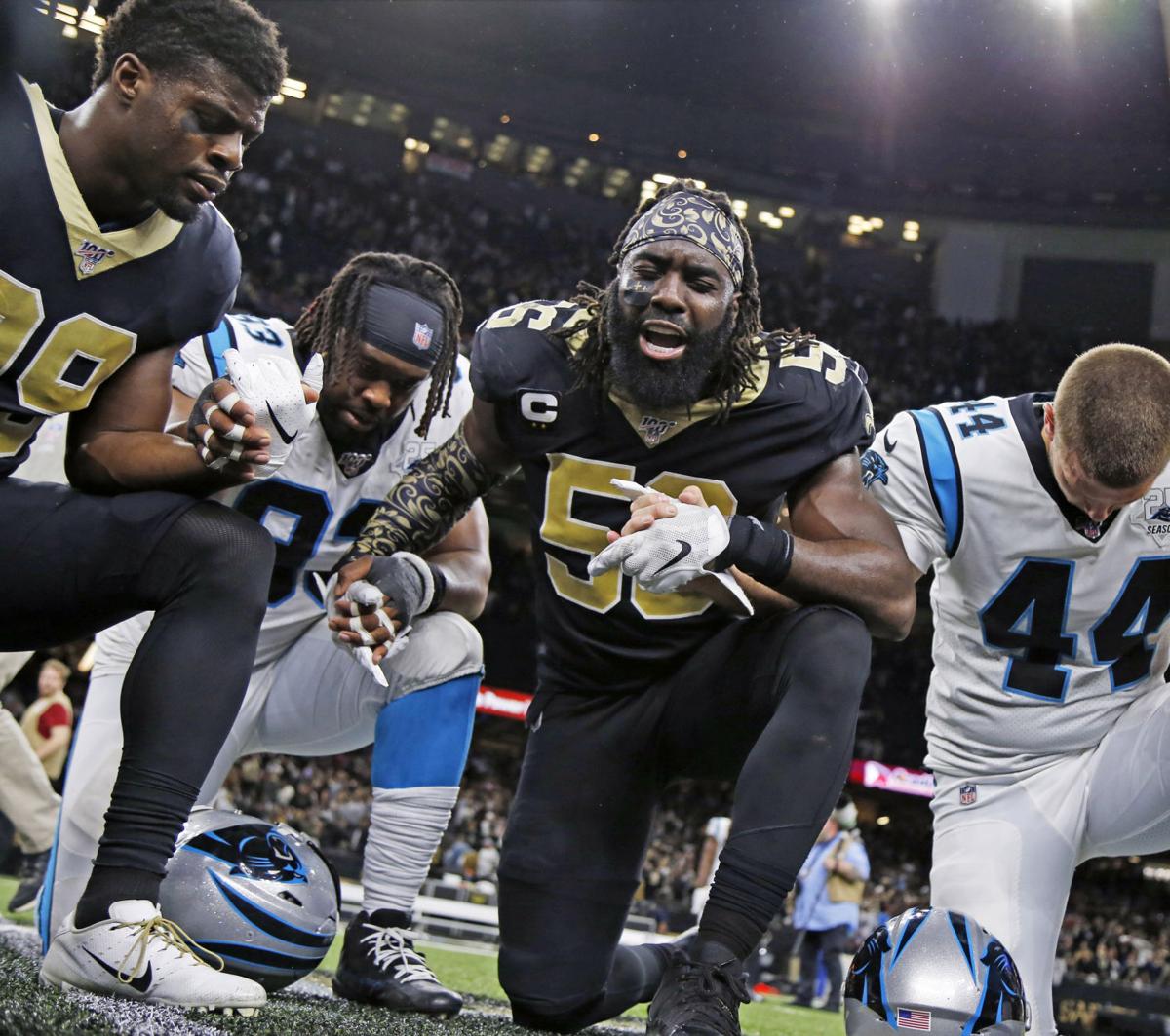 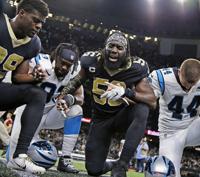 New Orleans Saints outside linebacker Demario Davis (56) brings his faith to the field. Here he prays with his teammates and Carolina Panthers players after a game. 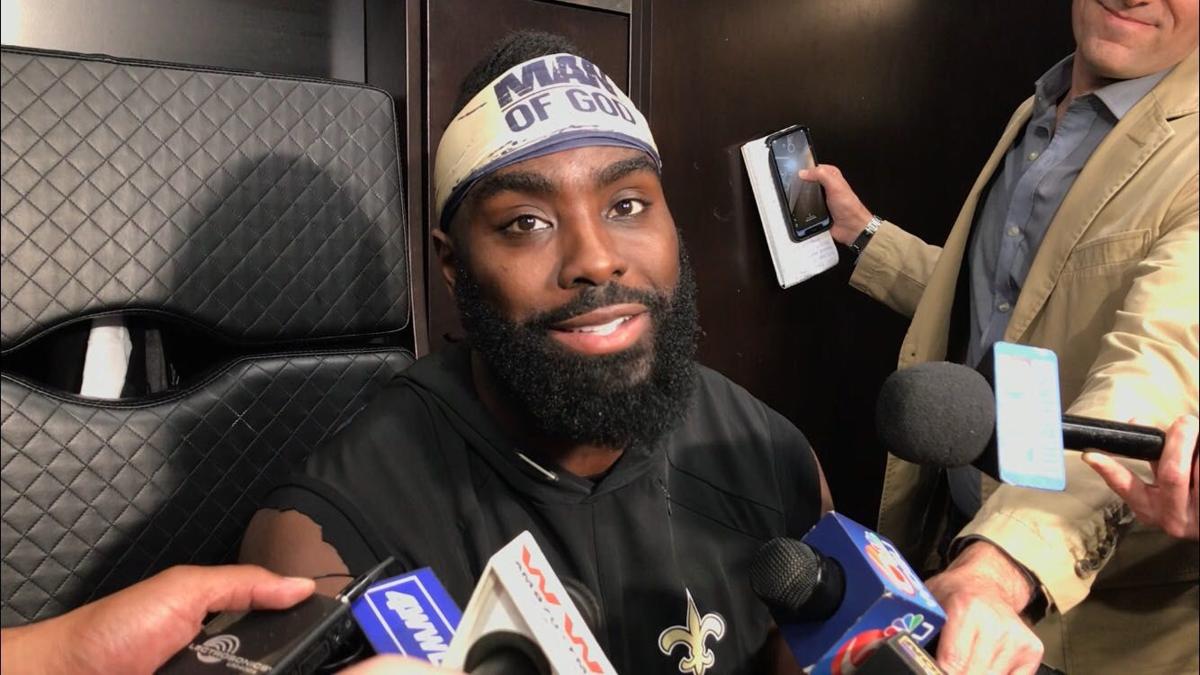 Demario Davis in his Man of God headband, for which the NFL initially fined him $7,000, but later dropped the penalty.

'The Unsuccessful Champion: Finding True Victory in the Midst of Adversity' by Demario Davis

New Orleans Saints outside linebacker Demario Davis (56) brings his faith to the field. Here he prays with his teammates and Carolina Panthers players after a game.

Demario Davis in his Man of God headband, for which the NFL initially fined him $7,000, but later dropped the penalty.

'The Unsuccessful Champion: Finding True Victory in the Midst of Adversity' by Demario Davis

New Orleans Saints star linebacker and "Man of God" Demario Davis has no qualms about sharing his faith, particularly on the field.

Davis, 31, made headlines last season when he was fined $7,000 by the NFL for wearing his "Man of God" headband during a game. The fine was later dropped, but the notoriety gave fans a glimpse into Davis' faith.

In the book co-written with Becky York, Davis talks about being born to a 16-year-old mother in a poverty-stricken area of Brandon, Mississippi, and finding himself caught up in a life of drugs and alcohol before finding a life in Christ.

"I came from nothing," Davis writes in his introduction. "Not that I'm ashamed of this. In fact, I'm proud of it. I love my story because it's just that — mine. As messy as it may be, I know God has redeemed every event in my life to piece together the puzzle that makes up Demario Davis."

The foreword is written by Ben Watson, a former Saints tight end and fellow devout Christian.

"Demario defines heroism," Watson writes. "A spiritual leader in the league, he's one guy you want to have in your locker room. He speaks the truth of the Gospel boldly, proudly, and loudly, no matter where he is or whom he's with. We need more Demarios in this world — people who are willing to carry the banner of Christ unashamedly, in humility, never deviating from the truth."

Davis' book has several intriguing and chilling stories, including the time his father nearly cost Davis his life by trying to help him reach the weight requirements to play youth football.

Davis had an estranged relationship with his father, an Army veteran. But during a period when the two were developing a closer relationship, Davis' father took him to the weigh-ins for the local Pop Warner team. Davis wanted to play running back, which had a 95-pound weight limit. Davis weighed in at 97.3 pounds during the morning weigh-in.

A distraught Davis told his father he really wanted to play running back. His father had a plan before the 4 p.m. deadline.

In the midsummer Mississippi heat, the veteran had his son dress in heavy clothing, including two pairs of sweatpants and a garbage bag. Davis "worked out" in a series of physically enduring tasks that included lots of running and then a 10-mile walk — until Davis passed out from dehydration.

"The next thing I knew, I was on the couch in our living room. … When I came to, I saw my dad come running to me, a look of sheer terror on his face," Davis said.

That look was only temporary. After admitting the situation scared him, Davis' father said they could still make the weigh-in. Davis made the deadline and the weight limit, losing 4 pounds in three hours.

"At the time, I didn't understand the magnitude of how dangerous this episode was," Davis said. "I could have died."

Davis, who spent a brief part of his childhood in Baton Rouge and once attended Broadmoor Elementary School, excelled in football, but ran into trouble off the field in high school and at Arkansas State University.

Still, he was drafted by the New York Jets in the third round of the 2012 NFL Draft. He spent four seasons in New York, a year in Cleveland and another year in New York before signing with the Saints as a free agent in 2018.

It was during college that Davis accepted Christ and got his life back on the right path, even preaching and leading teammates to Christ.

"Giving my life to Christ wasn't a rash, in-the-moment decision made at a conference while I was emotionally charged; this was a major turning point in my life. It has been the best decision I have ever made. Everything in my life changed in that moment. I was devoted to giving God my all," Davis writes.

"The Unsuccessful Champion" is an easy 159 pages. Chapters include "Don't Break Stride," "The Voice of Conviction" and "From Demotion to Promotion." Each chapter begins with a biblical verse.

The book will help readers understand that Davis doesn't just wear his religion on his headband. It seems to be in heart and carried out through his deeds and actions.

We can still see God in ALL of this. His power. His love. His compassion. His provision. Even his justice and his wrath. Nothing that is going on should surprise the people of God.

If there's ever a time we need God, it is NOW. It is God who is not only speaking to the hearts of his people. But he's indicating to all those who have ignored him, rejected him, played with him, lied to him and used him that now is the time of salvation.

God has brought governmental powers, Democrats, Republicans, white people, black people, rich, poor, immigrants, natives, stock markets, national and international sport leagues and major corporations to their knees. The playing field is level all across the world — just like all is level at the cross of Jesus Christ. For us churchgoing believers, all of a sudden it doesn't matter how large our church is, how big our budget, how many members. All seems insignificant now.

It would seem ironic to some that if there is ever a time we needed to be in church it's now — when we are encouraged not to gather. Now is not about being in the physical building about turning to God and giving him all the honor he is due.

We believe and are still standing on the promises of God and the power of his word.

Like: "If my people, which are called by my name, shall humble themselves, and pray, and seek my face, and turn from their wicked ways; then will I hear from heaven, and will forgive their sin, and will heal their land.” (2 Chronicles 7:14).

Let us continue to pray for ourselves and others. And may God have mercy on us.