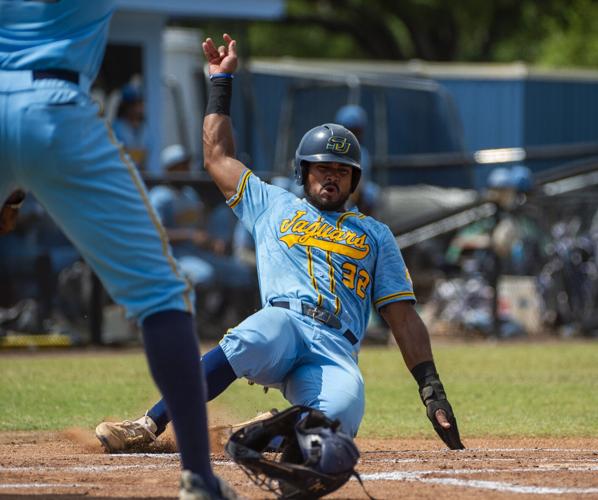 Southern University first baseman O'Neill Burgos (32) scores the first run against Alcorn in the bottom of the first inning of the season final at Lee-Hines Stadium on Saturday, May 21, 2022 in Baton Rouge, Louisiana. Southern University defeated Alcorn 9-1 after 6 innings in a weather shortened game. 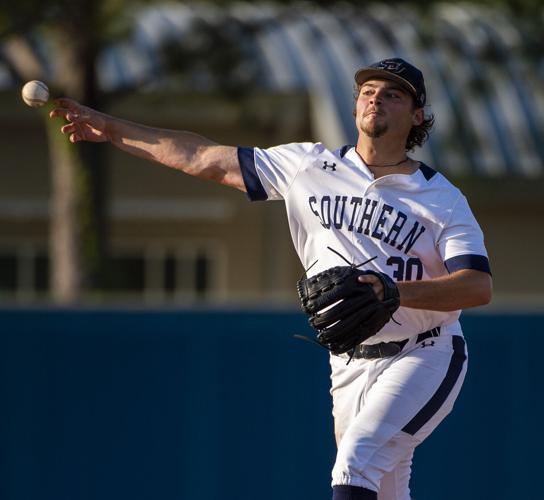 Southern University pitcher Joseph Battaglia (30) delivers a pitch against Alcorn in the top of the second inning at Lee-Hines Stadium on Thursday, May 19, 2022 in Baton Rouge, Louisiana.

Southern University first baseman O'Neill Burgos (32) scores the first run against Alcorn in the bottom of the first inning of the season final at Lee-Hines Stadium on Saturday, May 21, 2022 in Baton Rouge, Louisiana. Southern University defeated Alcorn 9-1 after 6 innings in a weather shortened game.

Southern University pitcher Joseph Battaglia (30) delivers a pitch against Alcorn in the top of the second inning at Lee-Hines Stadium on Thursday, May 19, 2022 in Baton Rouge, Louisiana.

Southwestern Athletic Conference teams know not to doubt Southern baseball in the postseason. NCAA baseball bracketologists might not have caught on.

Most predictors of the 64-team NCAA bracket punch in Alabama State as their SWAC representative even after last year’s Jaguars surprised the nation by knocking off unbeaten Jackson State in the league tournament final to gain the automatic bid.

Southern is looking to spring another surprise as the SWAC tournament opens play Wednesday at Regions Field in Birmingham, Ala. The Jaguars, the No. 1 seed from the West Division, take on Jackson State at 3 p.m. with the winner advancing to play the winner between Florida A&M and Prairie View at 3 p.m. Thursday.

Conference titles are commonplace for Southern baseball, which has a streak of two straight, won 14 in 33 years under Roger Cador and 24 overall. Jaguars coach Chris Crenshaw said his team is fine with everyone overlooking that fact.

“I haven’t talked to them about that at all,” Crenshaw said. “I’m fine with them not picking us. That’s less pressure we have to play with. We already have a target on our backs.”

There is no better lesson than last year’s tournament when the No. 3 seed Jaguars came out of the losers bracket to beat a Jackson State team that ripped through conference play at 24-0 and was 31-8 overall. O’Neill Burgos hit a three-run homer in the top of the ninth inning to erase a 6-4 Tigers' lead and Enrique Ozoa pitched a 1-2-3 bottom of the inning.

Crenshaw knows him well despite playing Jackson State only once this season, and beating them 7-5 in New Orleans.

“I recruited him to Jackson State,” said Crenshaw, who played at Southern but coached the Tigers five seasons before joining the Southern staff three years ago. “He’s going to throw strikes, mess with the tempo. He’s going to be around the strike zone, so we should get some good swings off of him.”

Second baseman Hill and designated hitter Devontae Rhodes spark the batting order. Hill is batting .392 with three homers and 40 RBIs. He also has a .498 on-base percentage. Rhodes is batting .341 and outfielder El’Rico Riley is hitting .302 with a team-best six homers and 37 RBIs.

Southern counters with Joseph Battaglia, who is 8-4 with 3.86 ERA and three complete games. He’s pitched 91 innings and allowed 92 hits but walked only 10 batters.

Burgos leads the Jaguars in batting average (.324) and RBIs (51) and is tied with Tremaine Spears and Jovante Dorris for the team lead in homers with seven. Spears is hitting .321 with 42 RBIs and Dorris is at .293, but is nursing an injury and is questionable for the game. He was hit by a pitch on his right hand against Alcorn State last weekend.

“We’ll find out more today on Dorris,” Crenshaw said. “He didn’t hit Monday, so we’ll see what it’s like Tuesday.”

Crenshaw said his veteran team knows the Tigers will be looking for some payback for last year’s shocking upset loss.

“They’re going to show up and play so we have to come out with intensity and execution and hope ours is better than theirs,” he said. “They have a really good coach (Omar Johnson) over there. I expect them to be charged up. They’re going to be aggressive. Looking at film and reports, they try to pull the ball a lot. If we execute and change speeds, we should be successful.”

BIRMINGHAM, Ala. — For the Southern baseball team, the wait was worth it.