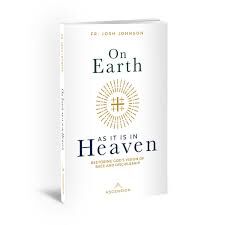 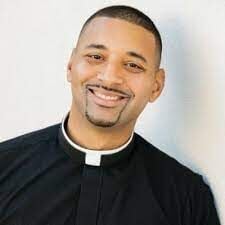 While enjoying the presence of Jesus during prayer at a chapel altar, the Rev. Josh Johnson’s “moment of peace” was interrupted by a sobbing priest.

A few moments later, Johnson asked the fellow priest kneeling next to him if he could do anything for him. The distraught priest responded by admitting he was “devastated” that his superior had assigned him to a predominately African American parish and was concerned about how he could minister to Black people.

Johnson, a Baton Rouge native and pastor of Holy Rosary Church in St. Amant, shares the unsettling encounter and many revealing and sometimes startling stories in his powerful new book, “On Earth As It Is In Heaven: Restoring God’s Vision of Race and Discipleship.” (Ascension Press).

After encouraging the priest on his gifts and growing in holiness, Johnson immediately found his own heart in mind going in different directions. He had trouble maintaining his focus and spent more time “wrestling” than praying.

“Over the years, I have reflected on this experience and have come to realize the dangers of not interacting with people who are different from us — racially, ethnically, or socioeconomically,” Johnson writes. “I do not assume this priest was racist simply because he was afraid to be assigned to a predominately African American parish. I do, however, believe his fear existed because he had had few if any, intentional relationships with African Americans.”

Johnson touches on similar fears regarding stereotypes; the “sin of racism” in employment, laws and even in the Catholic church; the power of fasting and prayer; horrific acts of discrimination; slavery; Jim Crow-era laws; ground-breaking Black priests and nuns; social justice; cultural comfort zones; reparations; progress; acceptance; and hope.

Some of those can be sensitive and controversial issues even within the church.

Johnson boldly challenges Catholics to recommit to building a church that reflects the rich ethnic diversity of the body of Christ “as it is in heaven.”

“My purpose and hope with this book has been to point out a few things some may not have considered and to more intentionally engage these conversations within our church. If we truly want to help fulfill the command of Jesus to ‘make disciples of all nations,’ we must not be blind to the sufferings of the Black community,” Johnson writes.

Johnson draws on a plethora of historical research, the Scriptures and his own painful personal experiences for the 180-page book.

Not long after his experience with the sobbing priest, Johnson was assigned to a place — St. Amant — that had a bad history in race relations. Friends advised him to request a reassignment.

“If I immediately thought that they were racist simply because others in the community were, I would be stereotyping an entire group of people I had been asked to serve. I would be no different than the priest I had encountered who had stereotyped those African American Catholics he had been invited to serve,” Johnson said.

Johnson, who was ordained in 2014 and the only African American priest ordained to serve in the Diocese of Baton Rouge, immediately found people hungry for Jesus and was welcomed into the Holy Rosary parish.

Johnson — born to a White mother and a Black father — has had a taste of the bitter cup of racism from the time he was young.

“Even today as a priest, if I am wearing ‘civilian’ clothes, I will almost certainly be racially profiled when I go out shopping,” he writes.

There was also the time when Johnson was returning home from a pilgrimage to Poland. An airport security guard accused him of not being a “real” priest, suggesting that his clerics and passport picture were fake.

Once after a Mass, a parishioner complimented Johnson on the exceptional job he was doing before warning: “But you better not bring the ‘hood into our parish.”

He has seen in his family. He said his parents — “among the most devout Christians” he’s ever met — experienced rejection from co-workers and church members from the time they started dating to today as retirees.

“In 1985, my parents purchased their first home. When some in the neighborhood learned that an interracial couple was moving in, vandalism of their home followed. Someone even spray-painted a Nazi swastika on my father’s police car. The insults continued,” he writes.

Johnson also shares many graphic stories of other godly men and women of color who have felt the sting of racism in society and in the church. These stories will no doubt evoke emotions. Like the one about Augustus Tolton, who is regarded by many as the first recognized African American priest.

Tolton was born into slavery in Missouri in 1854. His family eventually escaped to freedom in Illinois, where and his siblings started attending Catholic schools. The Tolton children were pulled out of school after harassment from White classrooms. Tolton learned to read and write from a group of priests and nuns.

After years of being rejected of his priestly calling due to his color, Tolton was ordained in 1886 in Rome. He came back to the U.S., where his Masses at an Illinois diocese were usually packed with White and Black parishioners.

“Even then, as his ministry bore fruit, (Augustus) was persecuted. Instead of rejoicing at his success in bringing the sacraments to all people, some of his white priest brothers took issue with his popularity,” he writes. “One of these priests, (Father Michael Weiss) publicly referred to (Tolton) as a “n***** priest. He discouraged white Catholics from worshipping with Tolton and other Black Catholics, and many heeded (Weiss’) evil counsel. Among other things, (Weiss) even claimed that worshipping with Black Catholics was sacramentally invalid.”

Much progress has been made in the area of race relations, but the work continues, Johnson said.

“We have come a long way in healing the racial wounds of many centuries and in transforming the many racially unjust systems that divided America for so long. Slavery and legalized segregation are a thing of the past,” he writes.

Johnson touted the rise of African Americans as bishops, coaches, CEOs of major corporations, senators, governors and even the president of the United States.

“These are great strides, and we need to keep this progress in mind. Nonetheless, these very significant advances should not cause us to settle for the status quo. There is always more work to be done on this side of heaven. Today, nearly sixty years removed from the era of legalized segregation and discrimination, we continue to see evidence of ongoing racial division, both in America and in our Church,” he writes.

One of the biggest takeaways from the book is that despite all that has gone in the history of the country and in the church in regards to race, our hearts and minds can truly be transformed and reconciliation can begin when each of us spends time with Jesus.