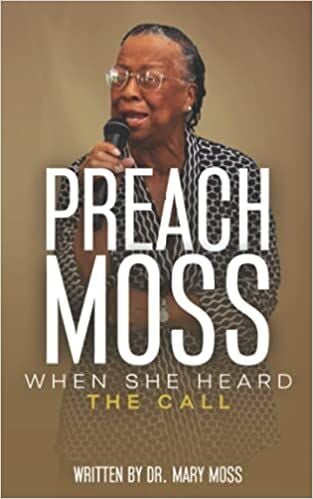 In her new book, the Rev. Mary Moss writes that it was important to share her story, particularly with women.

In her new book, the Rev. Mary Moss writes that it was important to share her story, particularly with women.

Shouts of "Preach, Moss" are common during the Rev. Mary Moss' fervent messages — even from the speaker herself.

"Preach Moss" is not only her signature saying but also the title of her new book, "Preach Moss: When She Heard the Call." The book recounts Moss' journey from her initial call as a youth in Watson, being named the first female pastor installed in the Fourth District Missionary Baptist Association at St. Alma Baptist Church in Lakeland and earning a Ph.D. in ministry, to becoming a nationally sought preacher and teacher.

"I first heard 'Preach Moss' from the voice of God announcing his call to preach the Gospel," Moss writes. "Preach Moss became my hearers confirming my call every time I would hear someone from the audience holler out, 'Preach Moss.'"

Moss writes that it was important to share her story, particularly with women.

"Many sisters struggle with acknowledging their call, accepting the call, and claiming or owning their call because of pushback by many against the idea of women in ministry," she writes. "Many women preachers are accepted in some churches as evangelists or as gifted 'speakers,' but not fully embraced as vessels by God to preach the Gospel."

Moss got an inkling of her call as a youth when she would slip away to spend time with God. On one occasion, she was communing with God "when all of a sudden, preaching came forth from somewhere in my belly, and audibly was released from my mouth. … I could not understand it, but I went into a full sermon."

She finally answered the call to ministry years later as a member of Shiloh Missionary Baptist Church under the leadership of the late Rev. Charles T. Smith, who had a reputation as being a "hard taskmaster."

Smith gave Moss his support and helped Moss prepare for her first "trial" sermon in August 1991.

Two other of Moss' ardent supporters from the outset were her husband, Carl, and her late father, William Marshall Whitley.

"He never stopped telling the story of his prayer for a boy preacher, but how God chose to call his daughter, Mary," she said of her father. "From the day I told him about my call until the day that he died, Daddy walked with me in ministry."

Passionate about education, Moss went on to graduate from New Orleans Baptist Theological Seminary with a master of divinity degree and from the Beeson Divinity School of Birmingham, Alabama, with a doctorate of ministry.

Moss' journey makes up the crux of the 76-page book. But don't skip the touching foreword by her "proud husband" of nearly 50 years.

"When I first heard Mary's voice, I immediately knew there was something special about it," Carl Moss writes. "I could not figure out just what it was, but something in my spirit said that this lady was special."

Moss closes the book with a sample of three powerful messages that may have readers shouting, "Preach Moss!"

For more information, go to https://www.amazon.com/dp/B099C5LPBC/ref=cm_sw_r_awdo_navT_a_DBD46K2R7SA7A9EXMNVJ

As the pandemic continues to upend our daily lives and routines, Shirley Weber has a message for women trying to maintain homes, protect their…