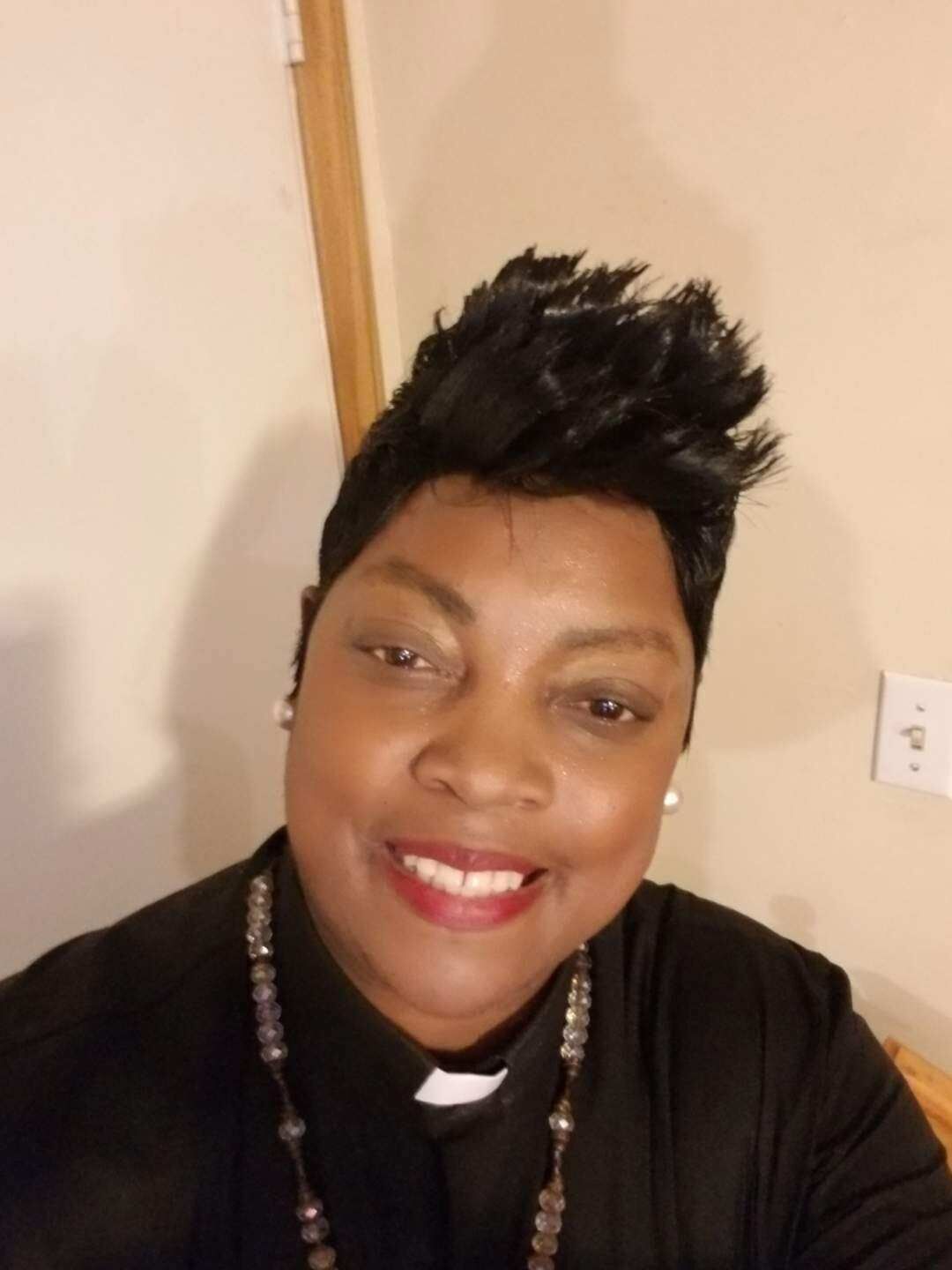 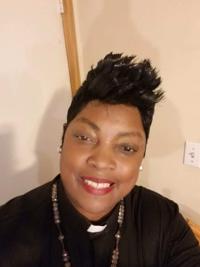 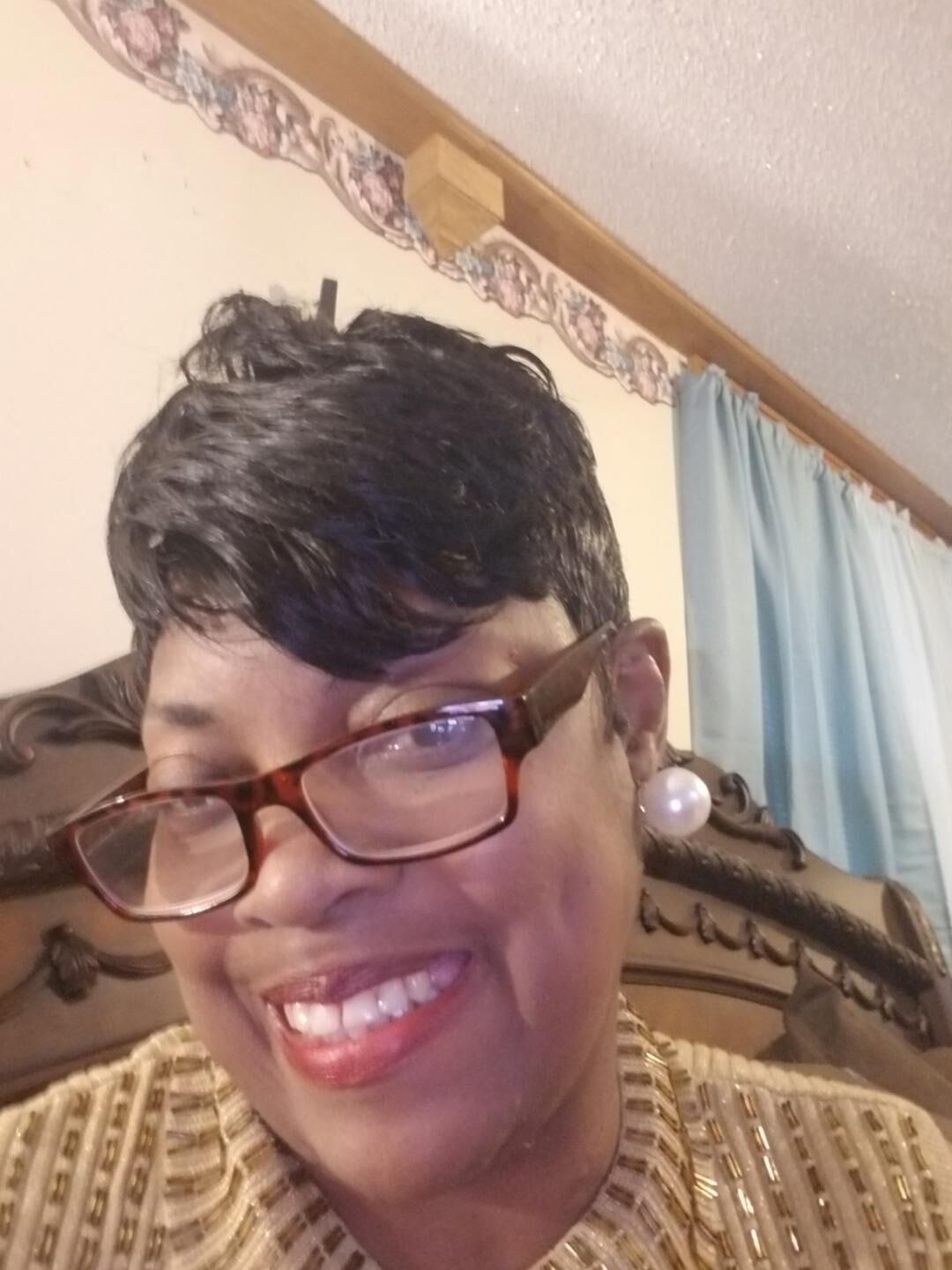 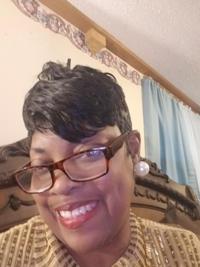 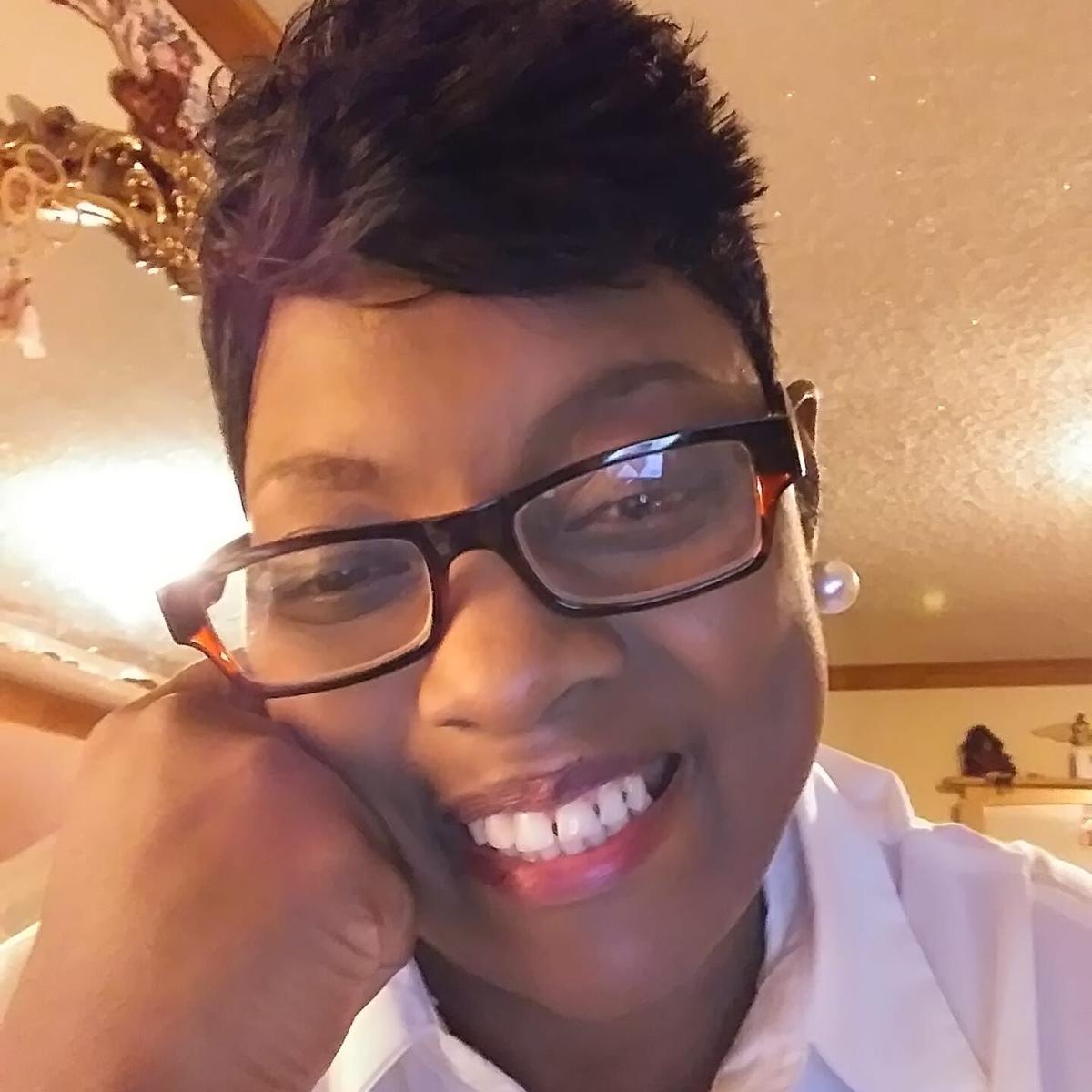 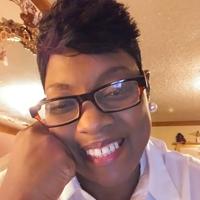 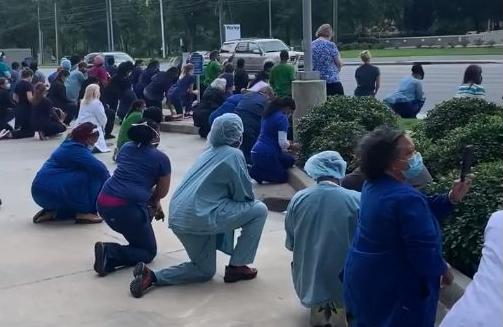 Health care workers at Our Lady of the Lake Regional Medical Center kneel for nearly nine minutes in honor of George Floyd, a Black man who died after a Minneapolis police officer knelt on his neck for the same amount of time, resulting in Floyd's death. 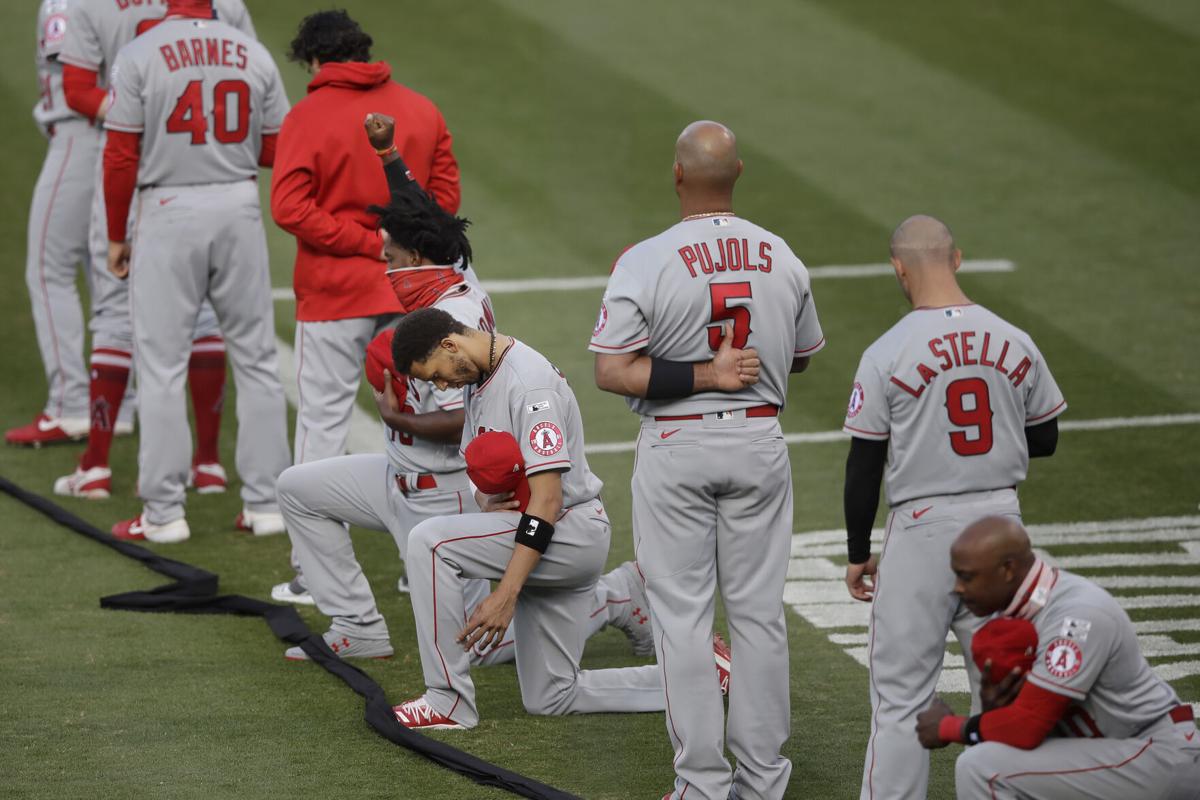 Los Angeles Angels' Brian Goodwin, center left, raises his fist while kneeling with Andrelton Simmons, center, and Justin Upton, right, during the national anthem before a baseball game between the Oakland Athletics and the Angels on July 24 in Oakland, Calif. 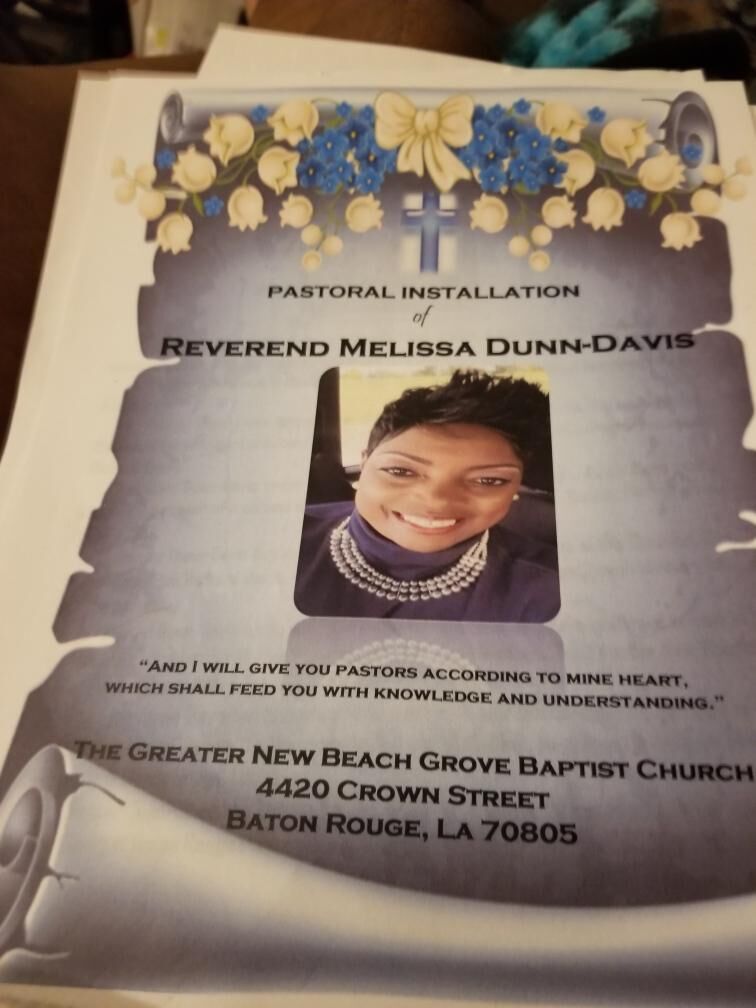 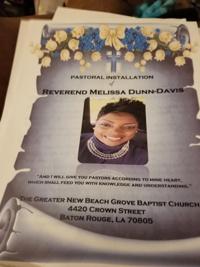 Health care workers at Our Lady of the Lake Regional Medical Center kneel for nearly nine minutes in honor of George Floyd, a Black man who died after a Minneapolis police officer knelt on his neck for the same amount of time, resulting in Floyd's death.

Los Angeles Angels' Brian Goodwin, center left, raises his fist while kneeling with Andrelton Simmons, center, and Justin Upton, right, during the national anthem before a baseball game between the Oakland Athletics and the Angels on July 24 in Oakland, Calif.

Six bouts with cancer, a stroke and the loss of her husband has left Melissa Dunn-Davis even more grateful for the blessings of God.

"I was able to overcome them all," said Dunn-Davis, the pastor of the Greater St. Michael and New Beach Grove Baptist churches in Baton Rouge, who has been in cancer remission for 1½ years. "If I had to go back and rewrite my story, I would make sure I wrote it the same way. I wouldn't want it written no different. I wouldn't want no more time for my husband. I wouldn't want to not be sick at any point and time. I wouldn't want anything to change because right now I have so much favor with God."

Dunn-Davis, 53, admits there were times when she was upset with God for some of the challenges she's had to endure, sinking into a "dark place" where she felt like giving up.

"If anybody tells you that they've never ever been mad with God, they're lying," she said. "It's a natural emotion that you go through in a part of your grieving. You look for someone to blame. I felt like Job. I said, 'You sicced the devil on me, God. Why would you do that?' He spoke to me and he said diligently, 'Because I knew he couldn't beat you. I knew it.'"

The challenges started relatively early in life for Dunn-Davis, a native of Erwinville who grew up in Baton Rouge. At 17, she faced her first battle with cancer. At 18, she suffered a minor stroke.

Those early setbacks didn't deter Dunn-Davis from trying to live a normal young adult life. Then one day, God spoke to her while she was hanging out with friends at the club.

"I was taking a drink and I heard a voice, and the voice said, 'Melissa, I need you.' At first, I thought somebody had put something in my drink, and there was nobody else around. … All of a sudden, I heard the voice again, and it said, 'Come on to me all you that labor and heavy burdened.' It said, 'I have saved you.'"

She suffered her stroke soon after. When she recovered, Dunn-Davis said the Lord told her to preach his word.

She worked for years as an accountant and home loan processor at a bank.

In ministry, Dunn-Davis preached her first sermon in 1991, received her ministerial license in 1993 and was ordained in 1998.

In 2000, at age 34, Dunn-Davis was installed as pastor of Greater St. Michael at 1619 N. 37th St. She has worked to make a difference in the community in her years at the church.

"I've had an opportunity to clean the neighborhood up," she said. "That's one thing I promised the older people on that street, on North 37th, that they would one day be able to sit back on their porches."

In 2018, Greater St. Michael took a hit in the neighborhood — quite literally — when a 16-year-old girl smashed a car into the church.

The car knocked out pews where the pastor usually spends Friday respite at the church.

"That particular Friday, I got caught up with work or something, so I couldn't be there, so God spared my life. I would have been back on that pew that she came through," Dunn-Davis said.

The teen was arrested after leading police on a chase that ended at the church, according to reports.

Dunn-Davis said the District Attorney's Office repeatedly contacted her about the case against the teen. Dunn-Davis refused, saying she didn't want to ruin the teen's life. When Dunn-Davis was subpoenaed, she went to court and faced the girl.

"I told her, 'Young lady, you may think I'm mad at you, but I'm not. God used you,'" Dunn-Davis said, thanking the youth for giving the church an opportunity to get a new roof, walls and replace the old pews with chairs.

She challenged the teen to change her life and work on getting her GED.

"I said, 'You're 16 years old. I don't want you to do anything other than what is right from now on,'" Dunn-Davis said.

Dunn-Davis visited the teen for months in a north Louisiana detention facility.

Upon her release, the teen visited the church.

"When she stopped here, she didn't know that we had planned a welcome home dinner for her," Dunn-Davis said.

Today, that teen is a sophomore at Baton Rouge Community College.

Helping young people is a passion for Dunn-Davis, who also heads the Beyond the Shadows youth challenge enrichment program on Plank Road. The program trains youth in a trade such as flooring, ceilings, roofing, drywalling, brick masonry, electrical work and computer science.

"They go to training and they don't have to have a loan when they finish," she said. "We find them a job and prepare them with the necessary things like steel-toe shoes and stuff like that they would need."

A year ago, Dunn-Davis added the title of New Beach Grove pastor to her already busy schedule. She had served as the guest or interim minister for five months at the church at 4420 Crown St., when members expressed their love for her and to have her as their pastor. She asked for a little time to think it over.

"I said, 'I got to make sure I love all of ya'll,'" she said. "They've turned out to be the sweetest and greatest group ever. And both ministries work together tremendously well."

Despite battling her own illnesses — including breast cancer and bone cancer — Dunn-Davis said the most painful experience of her life was the death of her husband of 20 years, Richard Davis, in May 2019. Thirty-three years older than her, he also was her assistant minister. He suffered from dementia and prostate cancer.

"It was horrible to watch him suffer and not know who he was nor who I was," she said.

"I don't feel like God cheated me out of anything," Dunn-Davis said. "If God doesn't give me anything else in this world — anything — he could never top what he did when he gave me Richard Davis."

That's a theme that Dunn-Davis carries on in her life — that God has not cheated her. So she doesn't try to cheat others.

As a pastor, she challenges people to seek God and study for themselves.

"People always said the Lord will make a way, but they forget to say seek ye first the kingdom of God and all these things will be added," she said. "I'm the type of minister that as I minister, I want you to look in the Bible for yourself. Don't take my word; my word's not greater than God's word."

As a woman of God, Dunn-Davis knows her ministry goes beyond the walls of the church. She has compassion for people she has been called to reach.

"I'm a pastor after God's own heart," she said.

Dunn-Davis does recall a time when her heart wasn't in it. She was tired and wanted to give up.

But Dunn-Davis said nurse Chasity Thomas Green at Baton Rouge General Medical Center, best friend Betty Carr and her mother, Irene Tate, challenged her to snap out of it and come to her senses.

It was that new vitality that enabled Dunn-Davis to minister to others while in the hospital, asking families to pray for loved ones.

"I had enough sense to know that if I prayed for them and if they accepted Jesus Christ as their savior, they would inherit the kingdom of God."

Dunn-Davis said the Beyond the Shadows building, 14501 Plank Road in Baker, will be open at 6 p.m. on Mondays. She will be hosting a woman's prayer closet, where she teaches the redevelopment of the mind, as well as a time of training young people for jobs. A grand opening will be held at 5 p.m. Aug. 8.

Philippians 2:9-11: Therefore God exalted him to the highest place and gave him the name that is above every name, that at the name of Jesus every knee should bow, in heaven and on earth and under the earth, and every tongue acknowledge that Jesus Christ is Lord, to the glory of God the Father.

There's been a lot of talk lately about taking a knee. While I'm painfully aware of the debate about professional athletes and others kneeling to protest social injustice, police brutality, systemic racism and more, many Christians believe one day we're all going to kneel before God and acknowledge Christ.

Meanwhile, the best we can do now is take a knee or two in prayer. God knows we need prayer right now with all that's going. Now is as good a time as any to humble ourselves and pray for our city, state, our nation, our world and our leaders.

Kneeling to pray represents humility; we definitely don't have to be on our knees to communicate with God. When I was growing up in the church, we knelt to pray. But that tradition has gone away in most of our Protestant churches. That's fine; I find myself praying mostly these days while lying in bed to start or end my day, or praying in various postures throughout the day. But there's nothing so powerful as seeing someone kneeling reverently in prayer.